We tested the powerful new 2017 Husqvarna FX 450 off-road/GNCC race-ready dirt bike at Cahuilla Creek MX in Anza, Calif. The Husky FX 450 was tested on the facility’s sometimes brutal single-track trails in the back, as well as the fantastic motocross track in view from California Highway 371.Following are our 10 Fast Facts from our first ride.1. The 2017 Husqvarna FX 450 offers the biggest displacement in the FX line with the 450cc SOHC engine. The engine’s power characteristics are much different than the FC 450 motocrosser, though the FX 450 still puts out a claimed 63 horsepower. The FX 450 builds revs and power a bit slower than the FC 450, and this works fantastic in the tight off-road conditions. On the motocross track, slipping the hydraulically actuated clutch gets the FX 450 going quicker out of corners, and the explosive top-end power will get you where you need to go with a pop of the clutch.2. WP’s new AER 48 forks replace the previous 4CS models. The AER forks are a 48mm split air fork, with preload settings on the left hand side and damping on the right hand side. The AER forks weigh 3.6 pounds less than the 4CS forks and can still be adjusted by hand, which is a great aid in setup. Adjusting the air pressure requires the use of WP’s air gauge. 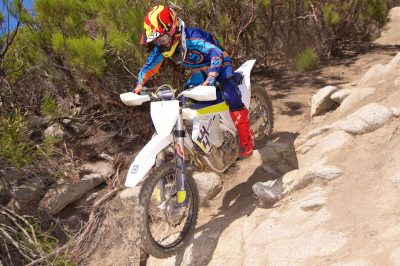 3. The suspension settings are drastically different than the FC 450 motocross model, but we still went out on a motocross track. When testing the FX 450 on Cahuilla Creek MX’s main track, the forks bottomed out on heavy impacts.To alleviate this, we increased the air pressure in the new WP AER 48 forks by approximately five pounds, and went six clicks stiffer on the damping. These modifications made the forks much more compliant in motocross conditions, which are often part of a cross-country or GNCC course. The rear shock is a bit softer than the FC 450, though it worked fine and hooked up very well while resisting bottoming on big impacts.4. The new map switch features two separate maps—one for a mellow power delivery and two for the standard map. The maps make a huge difference in power. After beginning on the softer map to familiarize myself with the motor, switching to the aggressive map really woke the FX 450 up. The power delivery was much better and was especially noticeable on the motocross track. The mellow map worked great on the tight, single-track trails that require the most technical riding.5. The new traction control system can be used on both maps. The traction control systems reads throttle input and engine speed to operate. They EFI system reduces power to ensure maximum traction and is activated during sudden increases in revs, such as when the rear tire spins excessively when hitting a slick spot on the track or trail. It can be turned on or off while riding. I didn’t notice the traction control while riding, but the track and trail conditions didn’t feature many slick spots where it could be put to the true test. It’s nice to know that it isn’t overly aggressive in its behavior, which could be a distraction.6. The Husqvarna FX 450’s gas tank is clear in order to see the amount of fuel and holds 2.2 gallons for off-road racing. Thankfully, the tank doesn’t come very high like some of the oversized ones do. The tank tucks down by the cylinder head of the engine and stays out of the rider’s way. The trade-off, of course, is that it’s only 2.2 gallons, which will require more frequent pit stops on longer races.7. Dunlop Geomax AT81 tires are mounted in the front and rear. The rear wheel is an 18-incher that is what we demand for off-road racing. The AT81s hooked up great on the deep, loamy soil found on the motocross track, and worked even better on the grippy granite rocks on the trail 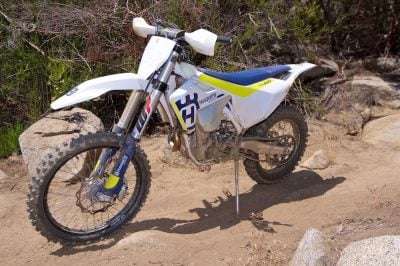 8. A larger lithium ion battery with more cranking amps ensures for reliable starting. The bike fires to life immediately after pressing the electric start button. Electric start comes very much in handy when stalling the bike on a hillside or hung up on a technical single-track trail.9. It’s a luxury to come in from a long ride and not have to muscle your bike up on the stand thanks to the kickstand found on the left side of the FX 450. If you want to remove it, it’s easily accomplished.10. The 2017 Husqvarna FX 450 can be used on both the motocross track and single-track trails. This is perfect for GNCC racers, who have to deal with a wide variety of course challenges. Credit the two ignition maps to alter power delivery, as well as the new WP AER forks to tune for either large jump landings or the rocky rubble found in off road conditions.Photography by Don WilliamsRiding StyleAndrew Oldar is sponsored by Moose Racing.