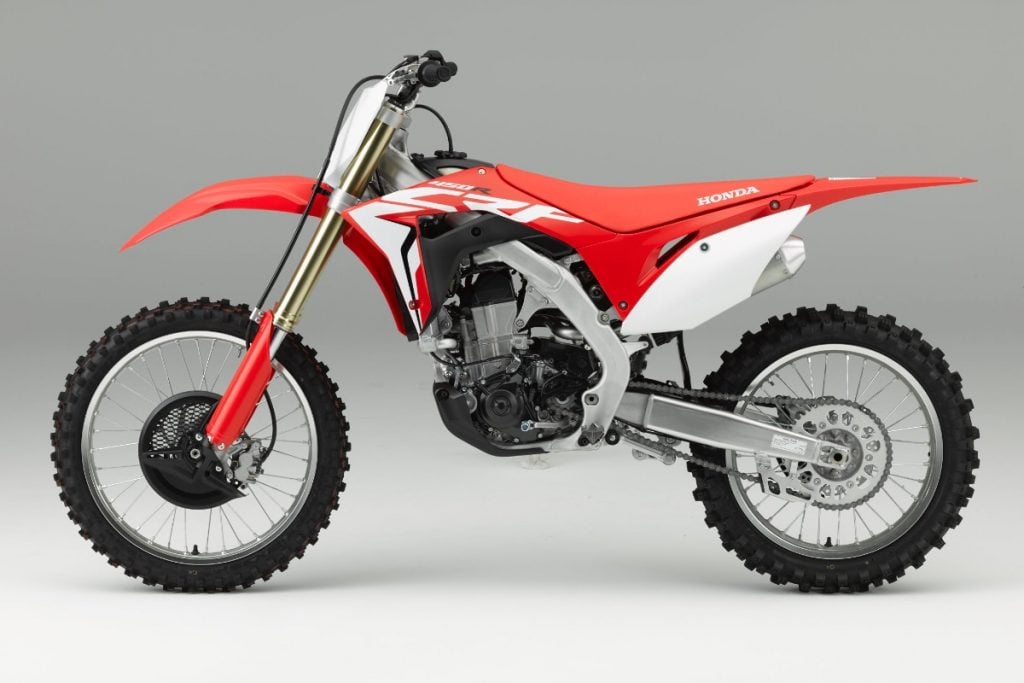 Every few years Honda re-imagines its premier supercross and motocross race bike, and 15 years after the debut of the CRF450R four-stroke race bike, we are now getting an all-new 2017 Honda CRF450R. It’s new from the tires up, so let’s take a look at what the 2017 Honda CRF450R is all about, and there’s a surprise at the end!

1. The 2017 Honda CRF450R motor is all-new. It’s still a Unicam design, but everything else has been changed with the stated goal to increase power and score holeshots.

2. The top end gets some major updates. Valve actuation on the CRF450R has changed. By using a finger rocker arm between the cam and the intake valve, Honda engineers have found a way to increase intake valve lift by a half-millimeter. A new rocker arm to the exhaust valve raises the valves’ lift by 0.85mm. Other valve upgrades include DLC on the rocker arms and oval-coil valve springs. 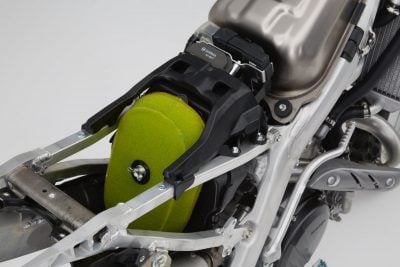 3. The valves are narrower and larger. Both the intake and exhaust valves are a full degree closer to vertical for improved combustion. The intake valve is 2mm larger, and the valve seats are two-way machines. Honda claims an intake efficiency increase of 19 percent and 10 percent for the exhaust efficiency.

4. There’s a new piston for the 2017 Honda CRF450R. Combustion chamber changes have upped the compression ratio to 13.5:1. The CRF450R gets a new squish band and the piston pin has the DLC treatment. Underneath the piston is a new four-piston oil jet to reduce the temperature increase created by the higher compression ratio.

5. Air has a straighter shot at the CRF450R’s intake chamber. By moving the shock down, the air intake from the air filter is now a straight line to the fuel injector, which also now has a more direct charge into the top end of the motor. The result of all these changes, according to Honda, is a motor that has more torque across the rev range, higher peak horsepower, and a higher rev limit.

6. The twin exhausts stay, but are shorter. Honda has reduced the length of the two mufflers by a hair over three inches in an effort to improve mass centralization.

7. The 2017 Honda CRF450R bottom end is all-new. The clutch has one fewer clutch-plate/friction-disc combo, which has narrowed the design. To compensate for the loss of a plate and disc, the clutch-plate thickness has been increased 0.4mm. 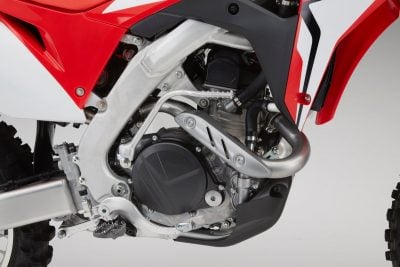 8. There are new transmission ratios. From the primary ratio to the final ratio, and the five cog grouping in-between, they’ve all been changed to match the new power characteristics.

9. There’s an all-new frame on the 2017 Honda CRF450R. This is the sixth generation of the twin-spar aluminum frame, and it’s lighter and has reduced torsional stiffness with the goal of improved cornering. Lateral stiffness is unchanged.

10. To cut weight, the subframe has been redesigned. Instead of forged gussets at the back of the subframe, the CRF450R gets extruded gussets. The weight savings is just a bit over seven ounces.

11. The shock has been repositioned. The mounts, top and bottom, are lower, plus the shock is now more centered on the swingarm. This allows for downdraft intake for the motor, and is also designed to increase traction.

12. The air forks are gone. Coil springs and oil now get it done on these fully adjustable Showa forks, which are now the same as the Race Kit version. This is a welcome change for riders who had problems setting up and maintaining the air forks. The cost is increased weight.

13. In addition to the other weight saving efforts, the fuel tank is titanium. Replacing the plastic tank with a titanium unit saves two ounces high and forward on the 2017 Honda CRF450R. 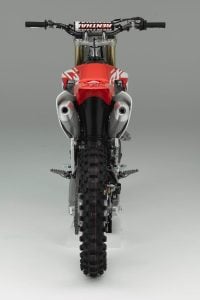 14. The rims get Dunlop Geomax MX-3S tires. This is good rubber.

15. Honda claims the 2017 Honda CRF450R is quicker out of the hole than ever before. All the motor and chassis changes are good for a 5.5 percent increase in acceleration in the first 10 meters, and a 5.2 percent increase over 30 meters. That works out to a 3.4-meter advantage after 30 meters—a significant improvement.

16. Electric starting is optional. Expected to cost about $650 for the kit, which doesn’t include a battery or installation, the 2017 Honda CRF450R can have electric starting if you want it. The switches on the handlebars have been changed to accommodate this, with the kill button and power mode selector now on the left handlebar.

17. The 2017 Honda CRF450R has a GNCC-ready off-road brother—the 2017 Honda CRF450RX. There aren’t many differences between the two bikes, but they are significant. The 2017 Honda CRF450RX has an 18-inch rear wheel, a 2.2-gallon plastic fuel tank, an additional tooth on the rear sprocket, Dunlop Geomax AT81 tires, softer damping and lighter springing for the forks and shock, more tractable ignition mapping, an aluminum kickstand, and electric starting (with kick backup) is standard. Both bikes get graphics molded into the newly shaped bodywork for increased durability.

18. You’ll have to wait to get either bike. The 2017 Honda CRF450R will hit the showroom floors in October, while the CRF450RX won’t be available until December 2016. Prices have not been set.

Don Williamshttp://www.ultimatemotorcycling.com
With 50 years of riding experience, Don Williams is a fan of all kinds of motorcycles. He enjoys sport bikes, cruisers, dirt bikes, touring bikes, adventure bikes, dual sport bikes, and rideable customs. Ask Don what his favorite bike is and he will tell you, "Whatever bike I'm on."

0
Yamaha continues to expand its pedal-assist electric bicycle range with the new YDX-Moro and YDX-Moro Pro. Both are designed as off-road capable two-wheelers that...
Read more
News

0
Yamaha continues to expand its pedal-assist electric bicycle range with the new YDX-Moro and YDX-Moro Pro. Both are designed as off-road capable two-wheelers that...
Read more