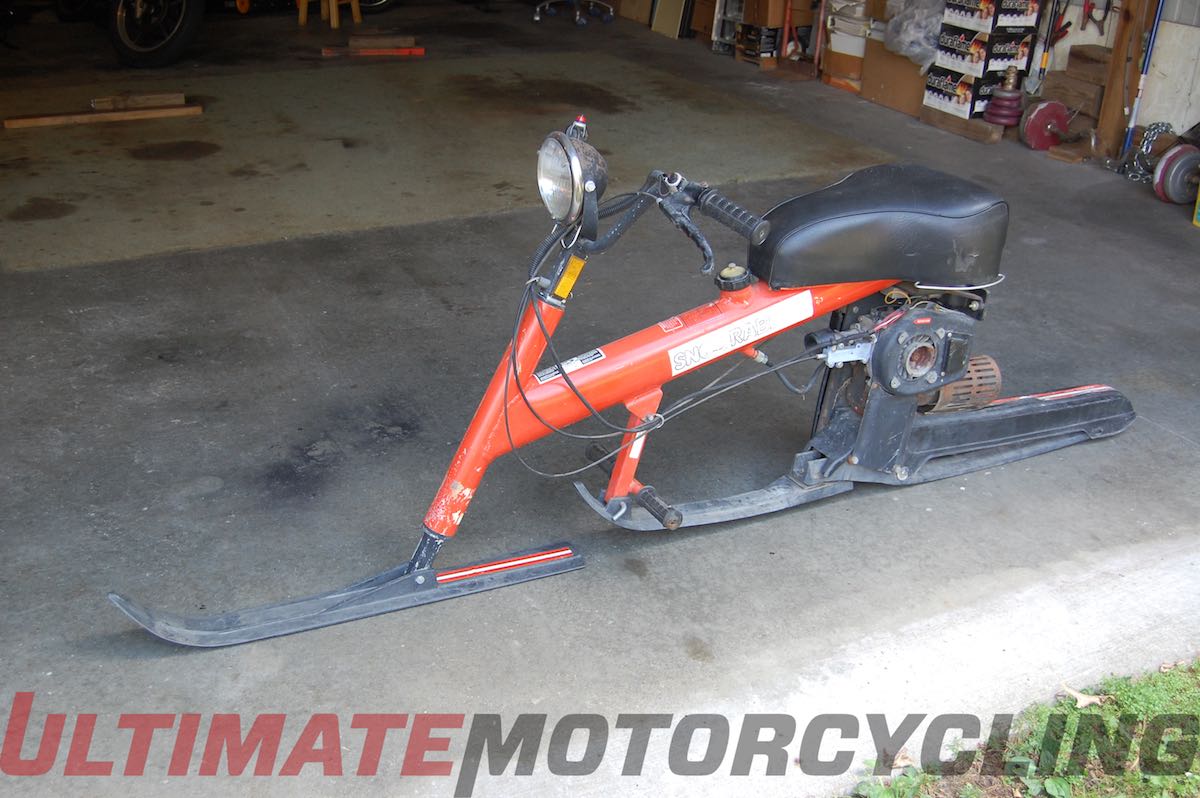 Sure, it’s hotter’n’hell here in the upper Midwest right now, and there’s lots of great riding ahead, but we all know it will end. Some day in the not-too-distant future, the skies will be slate gray, the wind from out of the north will howl, the temperatures will dive, and the motorcycle will be tethered to the battery tender.

To the motorcyclist living in the land of four seasons, not southern Cal’s endless summer, this leads to a state of mind known as “winter doldrums.” It is characterized by feeling down, listless and restless, with strange behaviors like watching figure skating and the X-Games on TV while eating bag after bag of Cheetos or standing in the garage for long periods staring blankly at the motorcycle or fantasizing you are riding a Triumph—while you are actually plodding along behind a Sears snowblower.

Modern science has struggled to find effective treatment. Some recommend getting naked in front of a giant light box to bolster your body’s production of vitamin D. Some join a local bar’s dart or pool league team. Some take up inherently dangerous and physically taxing activities like snowshoeing, cross-country skiing or downhill skiing.

Others struggle to regain normalcy by going to the same powersports equipment dealer who sold them their motorcycle and spending jaw-dropping amounts of cash on a snowmobile, winter helmet, boots, gloves, heated jacket and pants, trailer, gas-line antifreeze and so on. Others retreat into lonely, futile pursuits like ice fishing. None of these really works; I should know.

Now, thanks to a little-known talisman from the ancient past, there is hope. Legend has it that in the mid-1970s, the Marine Corps sought a winter combat/reconnaissance mobility solution. It would have to be able to be disassembled and reassembled quickly without tools in the field, able to fit in a large duffle bag for air drop, light enough to be carried by one person, quiet and have a range of at least 30 miles on a tiny tank of fuel. There are other versions of the legend, but this is the one we’re going with. 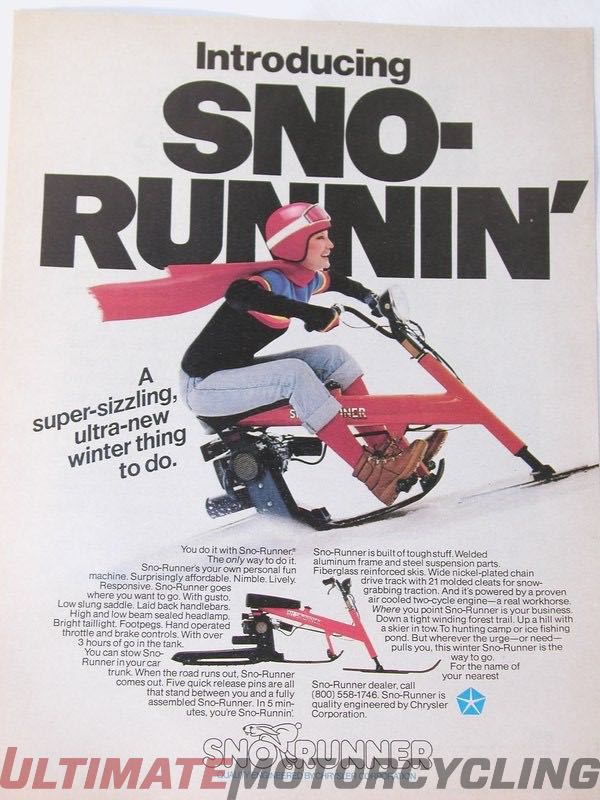 One of the contenders for that government contract was apparently Chrysler Corporation. They designed an experimental compact machine that is essentially a motorcycle with skis and a tiny chain-drive paddle track. Some would argue it’s really a snowmobile—we say no; it has footpegs and a twist-grip throttle. Snowmobiles don’t have footpegs or twist-grip throttle. End of argument.

Uncle Sam decided not to add the tiny snow-cycle to the arsenal of freedom. Chrysler, having spent a lot of time and talent on the project, decided to offer the thing, now officially called the Sno-Runner to John Q. Public.

There is uncertainty about how many of these machines Chrysler actually built. Some say as few as about 1,000, while others suggest as many as 28,000. Having grown up in the Big Snow Country of northern Wisconsin and the U.P. of Michigan, where I saw or at least heard tell of pretty much every brand and type of snowmobile in those days, I can honestly say, I can’t recall ever seeing one (I know darn well I’d remember that) and I don’t even recall seeing the print ads for the thing Chrysler put out.

Of course, there may be legitimate reasons for that—Chrysler may have placed the print ads in Good Housekeeping magazine, which I read only rarely back then and they may have concentrated their sales efforts of the machine in South Florida—or the east coast. What did they know, they didn’t build snowmobiles or motorcycles—they built cars. Except the Chrysler Marine Division; they built the Sno-Runner, but not for long.

At some point, Chrysler, already in bad shape financially, decided to unload the Sno-Runner segment and in 1982, sold it off to COMB liquidators. They re-named it the Sno-Rabbit, put stickers over the original Sno-Runner decals, liquidated the machines and parts inventory, and the Sno-Runner-Rabbit passed into powersports history.

In any event, I finally saw one this weekend at an antique shop called the Bulldog Recover and Restore in nearby Black Earth, Wis..

I was struck by the simplicity of design; it seems so simple even I could probably figure it out. It was evident it needed work; the recoil starter was missing, though the “knuckle-buster” wrapped pull cord approach seemed a workable option till that could be replaced. The drive chain was badly corroded and many of the paddle track segments were broken or missing, but I had a strategy in mind for that, as well.

Jacci, my better half, land speed racing crew chief and logistics manager for our treks to Bonneville, saw my mouth hanging agape as I examined the thing and carefully posed it for pictures. She knows the look.

“Maybe we should make it your early birthday present. I never know what to get you, anyway,” she said with a grin.

At first, I thought she was kidding—she already thinks I have too much stuff in the garage, but when we found out the asking price was only $300, it was a done deal. I had a vintage motorcycle for the snow!

I carried the thing off the porch it was sitting on and hoisted it up on our truck myself. I haven’t checked the actual weight, but I guess it must be only about 80 pounds dry weight. 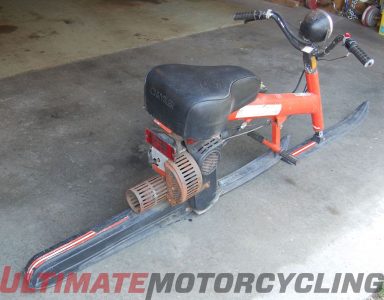 Since taking it home, I did a little research on it. According to what I can find, the powerplant is a 134cc loop-charged Chrysler Marine two-stroke single cylinder with CD ignition and a Tillotson 320A carburetor. The standard version was a claimed 7 horsepower, while the high-performance version was claimed to put out about 10 hp. Starting is with manual choke and recoil. There’s a 90w alternator to power the high-low sealed beam headlight and taillight that includes a stoplight.

The fuel is a manual-mix; no oil injection and period advertising claims it’ll run all day on its 1.3 gallon tank that is in the main top tube of the all-aluminum frame. There’s no suspension, but the seat is massively padded, putting most motorcycle and snowmobile seats I’ve parked my butt on to shame. If things don’t work out, I may take it off the Sno-Runner and put it on one of my other bikes. It has the original seat cover bearing the “Chrysler” name on it.

Transmission is a single-speed with a centrifugal clutch just like on my old Cat mini-bike. Makes me a little misty-eyed with nostalgia. There isn’t a track in the snowmobile sense of the word; not a rubber one, anyway. Instead, there is a small roller chain with 21 paddle-track style cleats spot welded on. The hand brake is lever operated on the left handlebar and activates a mechanical band brake that grips the outside of the clutch housing.

As part of my research, I discovered a website where the new-old-stock Sno-Runner parts are available, so I’ll be getting in touch with the nice folks who run it and ordering some items.

We’ll keep you posted on how things go. I’m not a particularly gifted mechanic, so there may be some bumps in the trail before I get my Sno-Runner back up to speed (top speed is about 30 mph).

In the meantime, I think I’ll cancel my light box therapy sessions for this winter. Chrysler may have created just the cryotherapy I need.