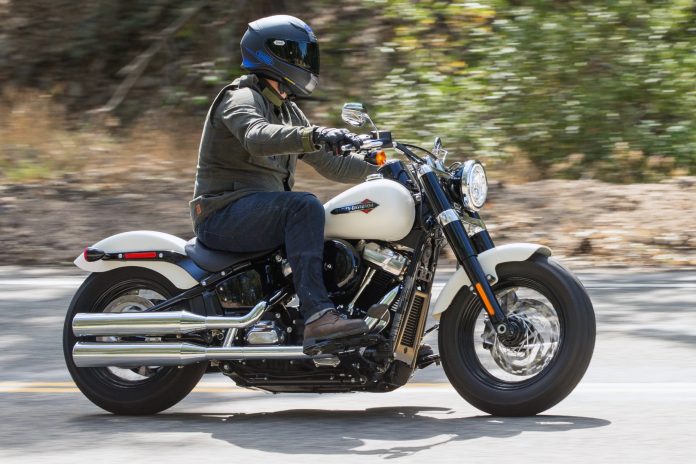 Harley-Davidson has created quite a stir with the 2018 Softail update, and there are no signs of that fever calming. This is due to an all-new chassis and suspension componentry, plus the introduction of the Milwaukee-Eight engine throughout the entire line.Harley-Davidson revitalizes the brand with greater performance and comfort, while also maintaining a connection with its deep roots. Those goals have flourished in the 2018 Harley-Davidson Softail Slim. 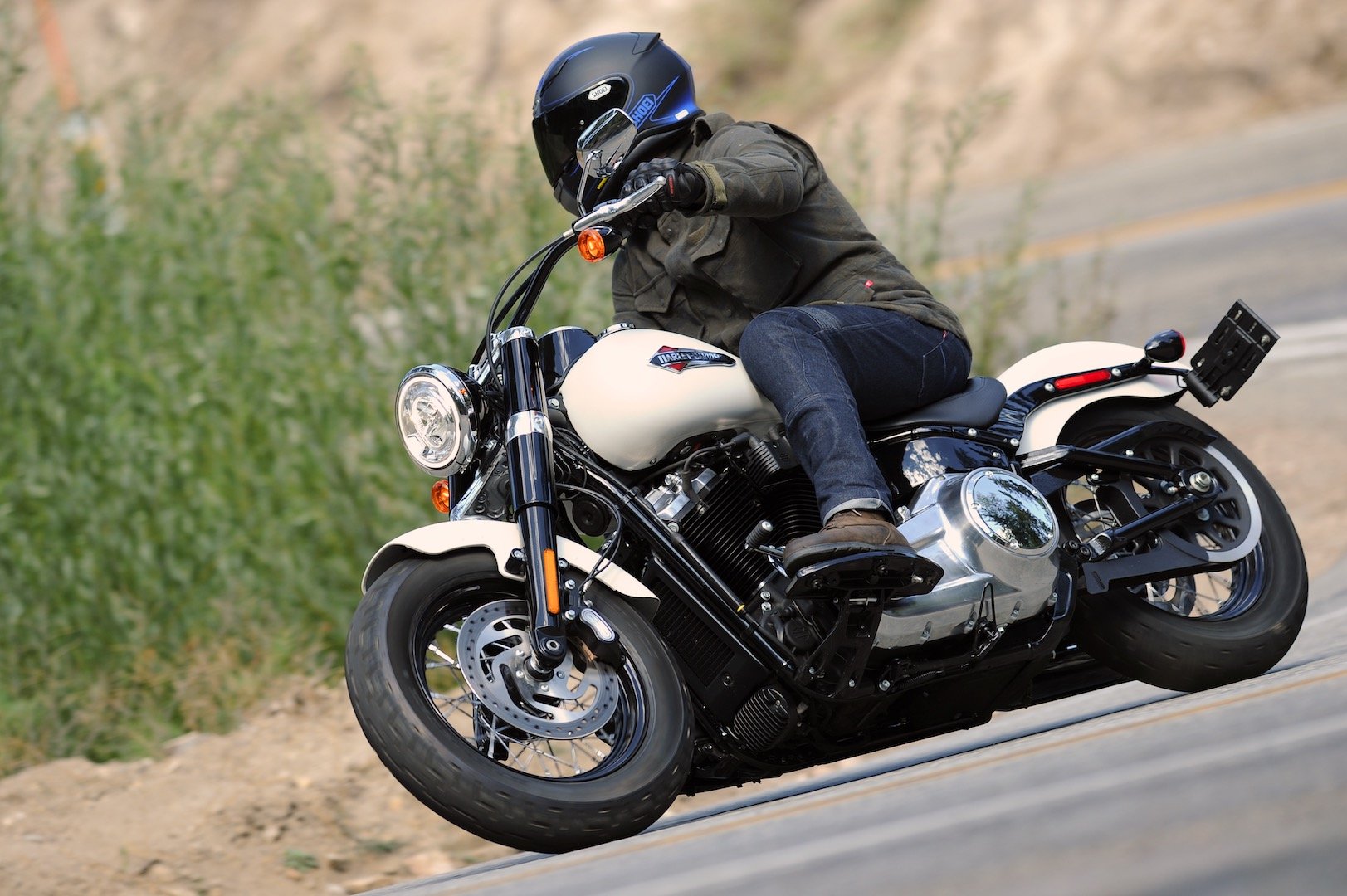 1. The 2018 Harley-Davidson Softail Slim remains true to bobber styling. At first glance, one might not pick up on the changes throughout but that is the beauty of this update. Harley designers have seized upon the traditional styling of the Slim, without making a mess of the recipe. The chrome triple clamps now embellish a black fork tube cover, and the headlight backing has now been removed, giving it a more custom vibe. Plus, the classic Harley tank badge solidifies the Slim’s retro-mojo. In all, Harley designers have done a commendable job, paying homage to the bobbers that inspired it.2. With the Twin Cam put out to pasture, the Milwaukee-Eight 107 powerplant takes its place. One of the most beneficial updates to the entire Softail line is the addition of the Milwaukee-Eight motor. Featuring a claimed 110 ft/lbs of torque at a low 3000 rpm in the Slim configuration, this motorcycle is a joy to ride due to heaping servings of torque. It also has a much smoother ride, thanks to the dual-counter balancing. The shotgun exhaust hums a tune that any gearhead can appreciate, especially when you start pouring the throttle on. Matched with great fueling, the Slim’s engine is faultless.3. The Slim’s 26-inch seat height, floorboards, and swept flat bars make this bike incredibly accommodating to many riders. At 5’ 10”, with a 32-inch inseam, I had ample room to move about and relax. One of the biggest improvements comes in the seating position itself, which now features a tuck-and-roll seat that cradles the rider with relatively plush padding. Last year’s Slim was equipped with a minimalist seat that was not kind to the derriere. 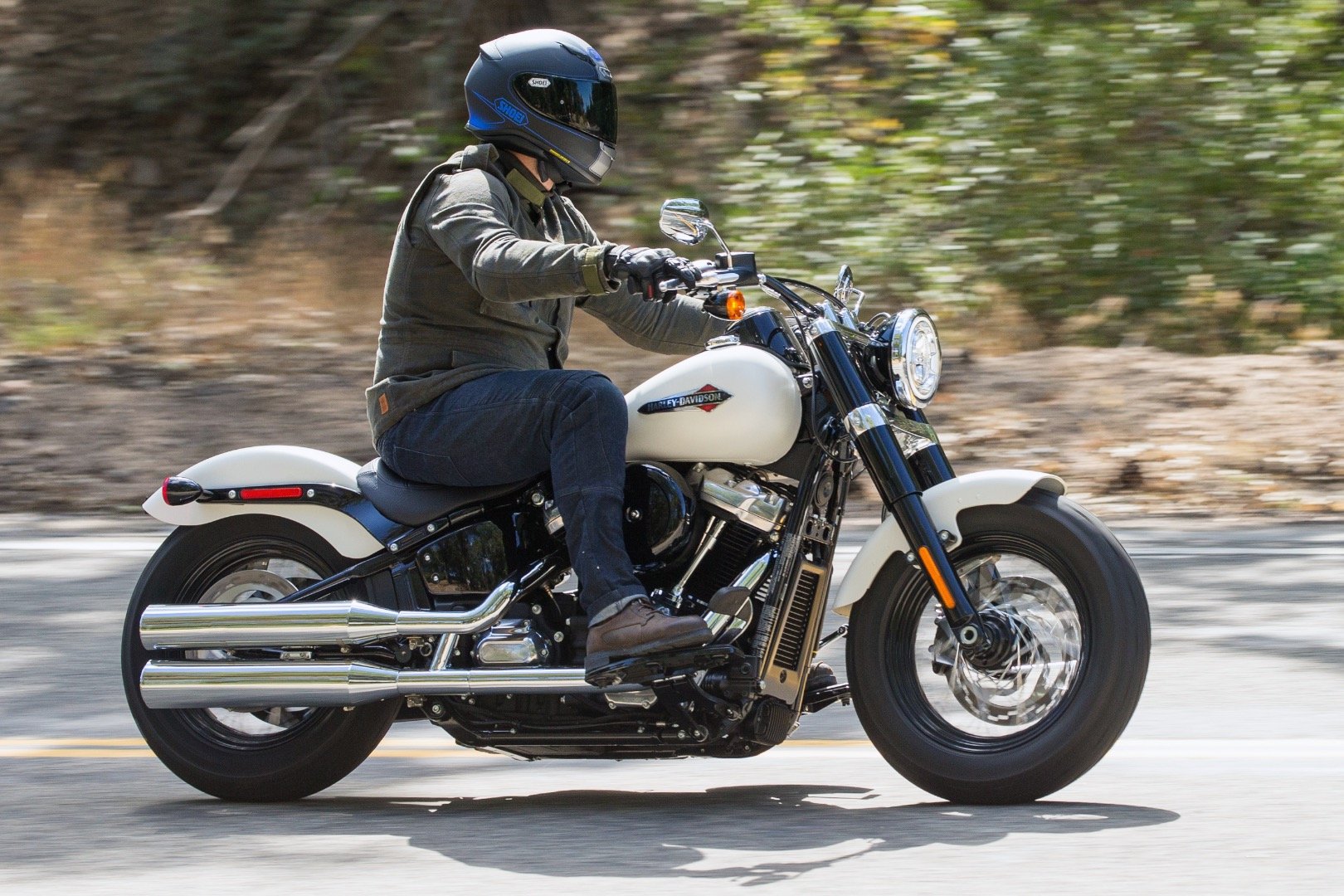 4. All-new suspension adds performance and comfort to the 2018 Harley-Davidson Softail Slim. My biggest critique of the earlier Softail Slim was that its low slung stance meant less suspension travel, so it had harsh damping that transferred hits directly into the rider. Thanks to a new Show Dual Bending Valve fork with cartridge style internals, and an all-new single-shock rear suspension design, the 2018 Slim is remarkably comfortable. It easily soaks up inconsistencies of all shapes and sizes. Damping characteristics have been dramatically improved, making the Slim a smooth and predicable ride, keeping everything in line.5. Harley-Davidson’s all-new Softail platform has allowed the brand to tease out greater capability and stability. The Slim is no exception to that rule, offering greater lean angles and confidence. While more spirited riders will become familiar with the sound of floorboards on the asphalt, that gravely song isn’t heard quite so soon. The most impressive advancement with this update is in terms of stability, regardless of the situation, due to greater torsional stiffness throughout. At no point, did I feel an ounce of unsettling headshake or flex in the Slim’s new Softail frame; it remains impressively sure-footed.6. The 2018 Harley-Davidson Softail Slim is a gentle giant when it comes to handling. The Softail update has teased out a greater level of agility in the Softail line, making the Slim noticeably nimbler. It’s ample 64.2-inch wheelbase and 30 degrees of rake make for plenty of stability. 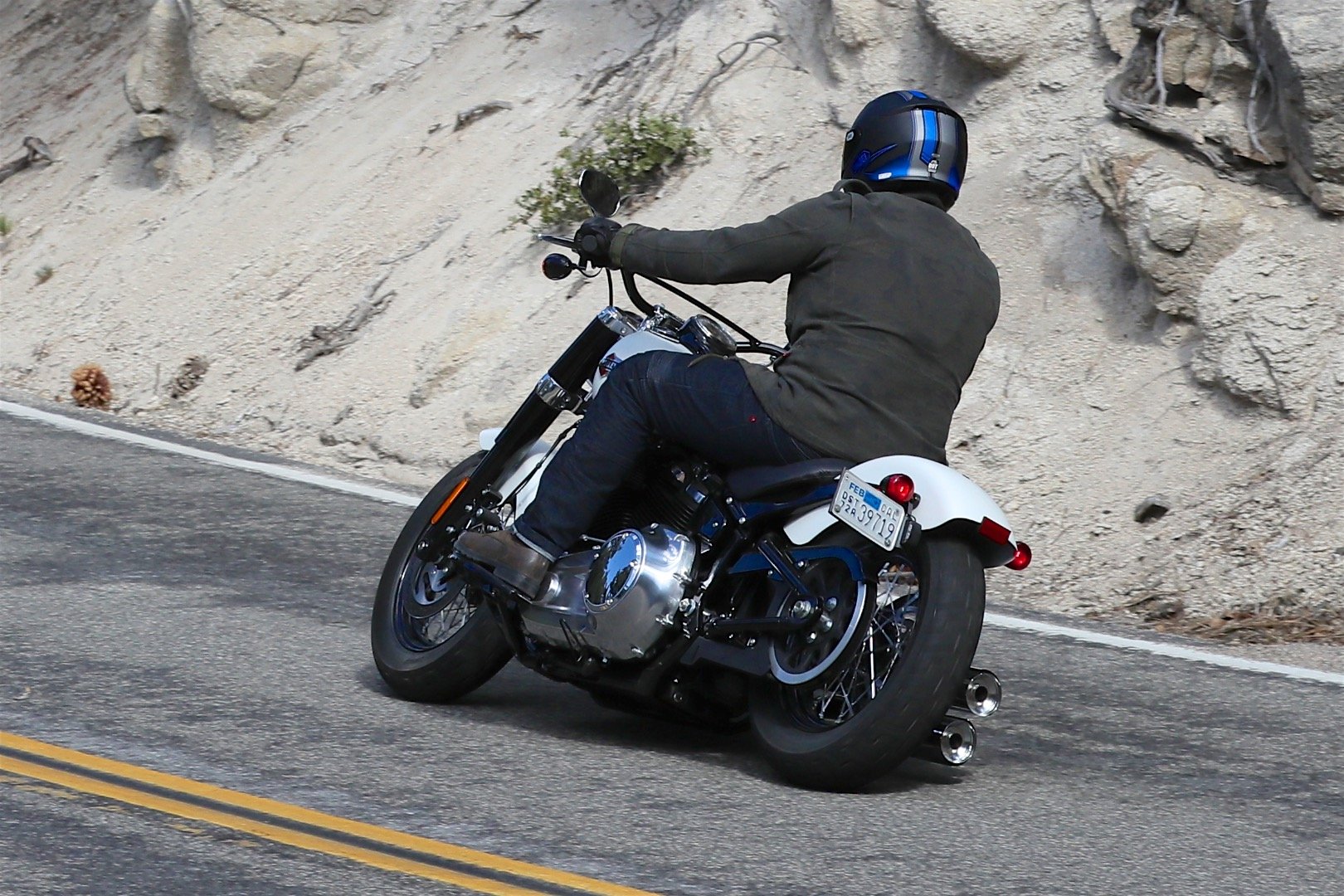 7. While the Slim is stable, it is willing to turn. In addition to having a cornering friendly 150mm rear Harley-Davidson branded new Dunlop D401T tire, we can thank the updated geometry, suspension, and 35-pound weight loss for these positive attributes.8. When it comes to braking, the Slim gets the job done. Though the curb weight of the Slim is a stout 671 pounds, it will come to halt commendably with just one disc per wheel. Feel at the lever is progressive and predictable, lacking any shocking bite, making either brake quite easy to modulate at any speed. To get the most out of them, it does require a good bit of muscle.9. ABS is optional and will set you back $795 dollars. They say you can’t put a price on safety, but of course, that’s not a true statement—an extra layer of safety will set you back $795. Those familiar with Harley ABS will not be shocked, it performs adequately and does its intended job, without encroaching on a dry ride, even when braking aggressively. 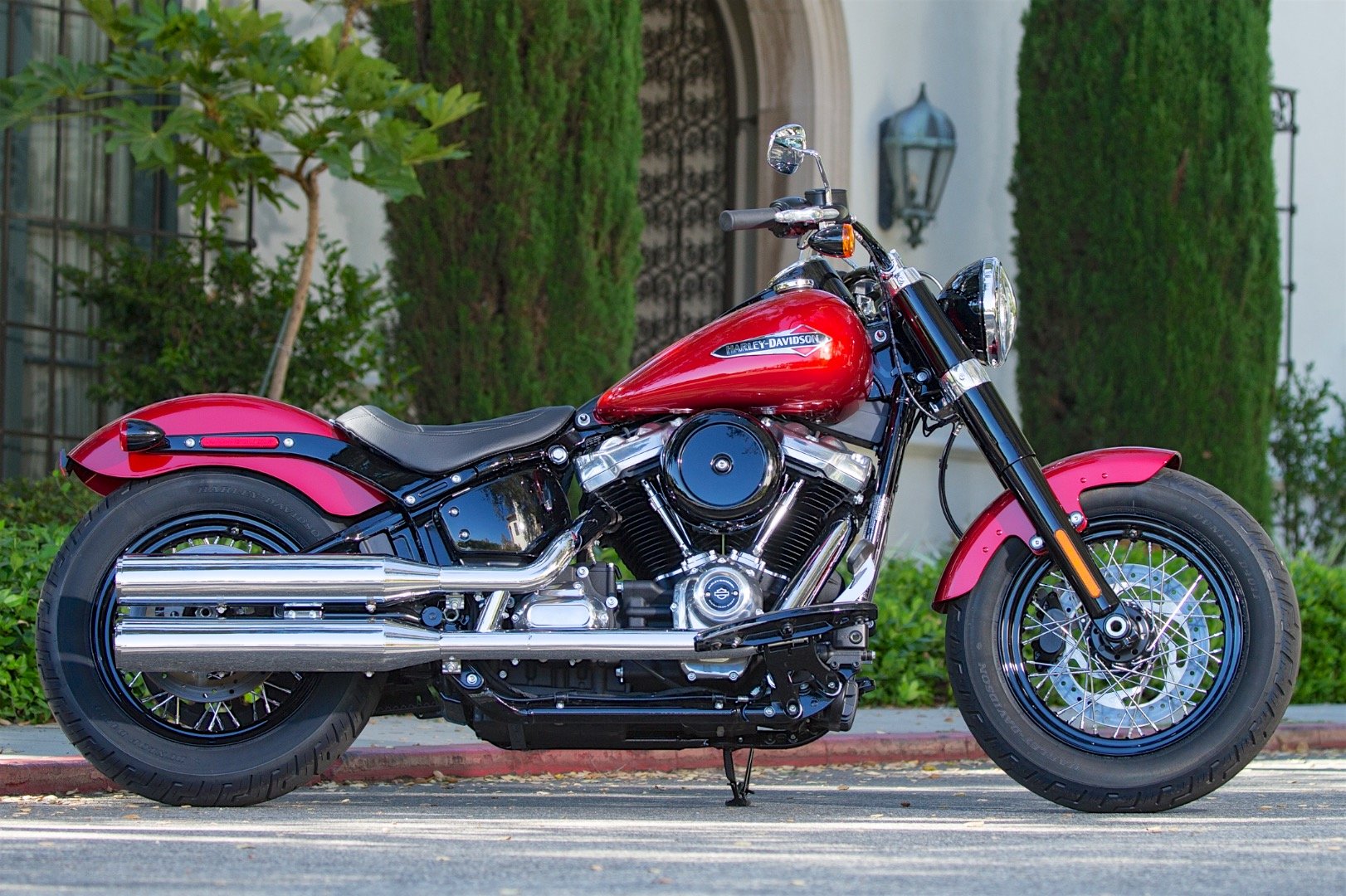 10. LEDs show the way on night rides. Moving away from conventional headlights, the 2018 Harley-Davidson Slim has a LED headlamp in a traditionally styled housing.11. The Harley-Davidson Softail Slim has changed, but only for the better. The Slim has always been a charmer—great looks and gentle handling were standout characteristics of previous models. However, poor suspension and comfort characteristics left something to be desired. The 2018 Harley-Davidson Softail Slim suffers none of those issues, making it one of the most positively improved models in the latest lineup from The Motor Company. All of the wonderful attributes remain, while its previous foibles were cast aside, making it a stand out among the new Softails.Photography by Riles & Nelson, and Kevin WingRIDING STYLE