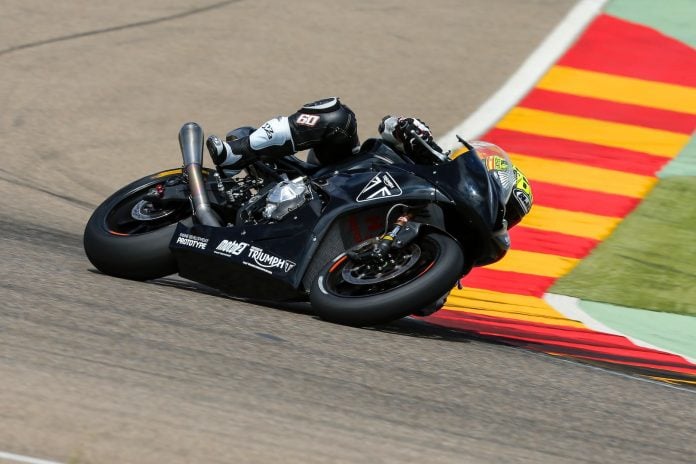 When Moto2 replaced the former 250cc two-stroke class in 2010, Honda signed on as the spec-engine manufacturer.Honda continues as the spec-engine manufacturer through 2018, but a new OEM will provide engines in 2019—Triumph.Triumph, which signed a three-year contract with Dorna (MotoGP commercial rights holder) to use its 765cc inline triple from 2019-2021, continued testing its Moto2 engine this week at Motorland Aragon. 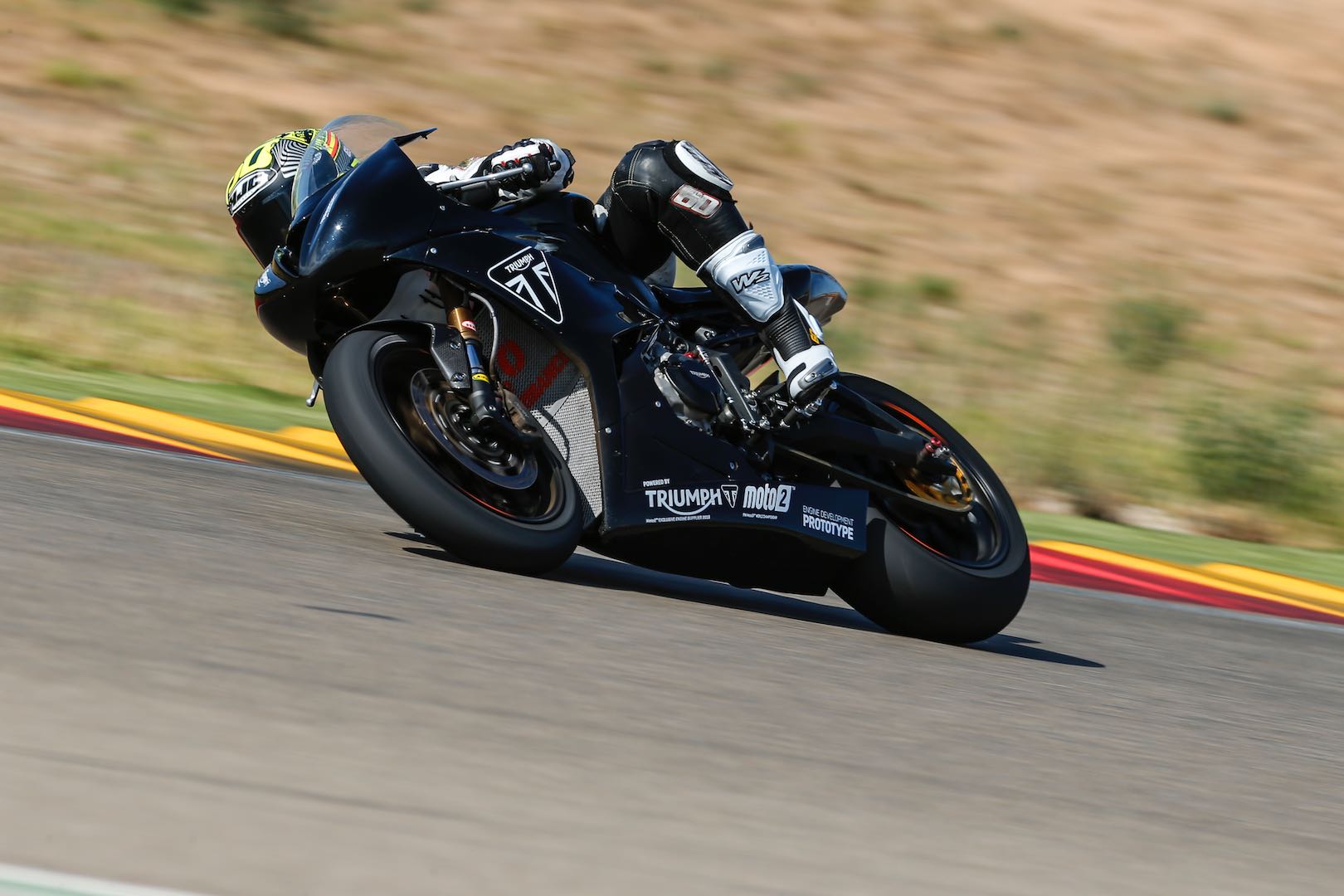 At the controls of the Moto2 machine was 2009 125cc World Champion and Moto2 runner-up Julian Simon. This is the “mid-way” point of engine testing, which consists of performance and durability evaluation. The first batch of Triumph engines will reach Moto2 teams in June 2018 (for testing, not racing).Triumph says it is “ahead of expectations” in regards to the engine’s power, torque and durability, and already witnesses “consistent and competitive lap times.”Steve Sargent, Chief Product Officer for Triumph Motorcycles, says “At this stage of the development program we are in a good place. We are very pleased with the pace that Julian is showing with the latest engine and his feedback has been very positive. We have confidence that we will deliver an engine that the teams will enjoy racing with and a spectacle and sound that will excite the fans.”Julian Simon says: “I am really happy to be here in Aragón testing the development of the 2019 Moto2 engines with Triumph. I can see there has been a big improvement with the latest engine, giving a great feeling. There’s a lot of power and the gearing is fantastic, and for the sound, this is also fantastic. To me, it’s fun.”During the contract period, Triumph will supply Moto2 teams with race-tuned 765cc Triumph triple engines, which are based on the powerplant from the 2018 Triumph Street Triple. 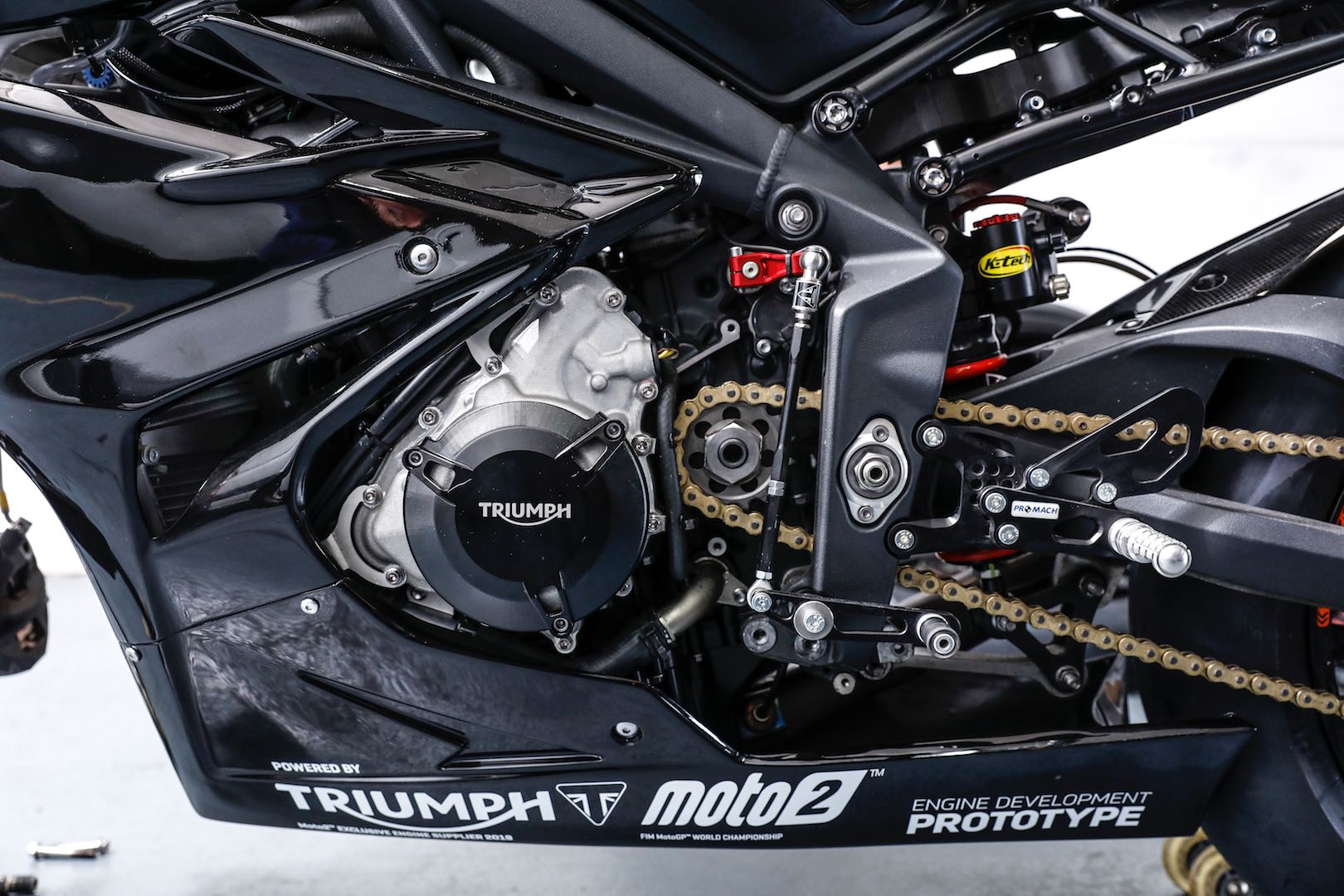 The new engine is a significant development of the race-winning Daytona 675R powerplant that has powered Supersport wins at the Isle of Man TT, Daytona 200 and British Supersport Championships in 2014 and 2015.Based on the highest specification 765cc powerplant from the Street Triple RS it has been developed for Moto2 with the following modifications:

Based on the new MY18 Street Triple powerplant, the Triumph Moto2 765cc triple engine has been developed and tuned for a major step up in power and torque.In “road” set-up the new 765cc engine delivers the highest ever level of performance for a Street Triple: 121 horsepower @ 11,750 rpm and 56.8 ft/lbs of torque @ 10,800 rpm.It has more than 80 new parts compared to the previous generation engine, including an increase to the bore and stroke. All-new engine components include:The race specification Triumph 765cc Moto2 engine has been developed further to allow the engine to breathe more freely and rev harder than the production bike, increasing overall performance. Other changes have been made specifically to adapt the engine for race use.