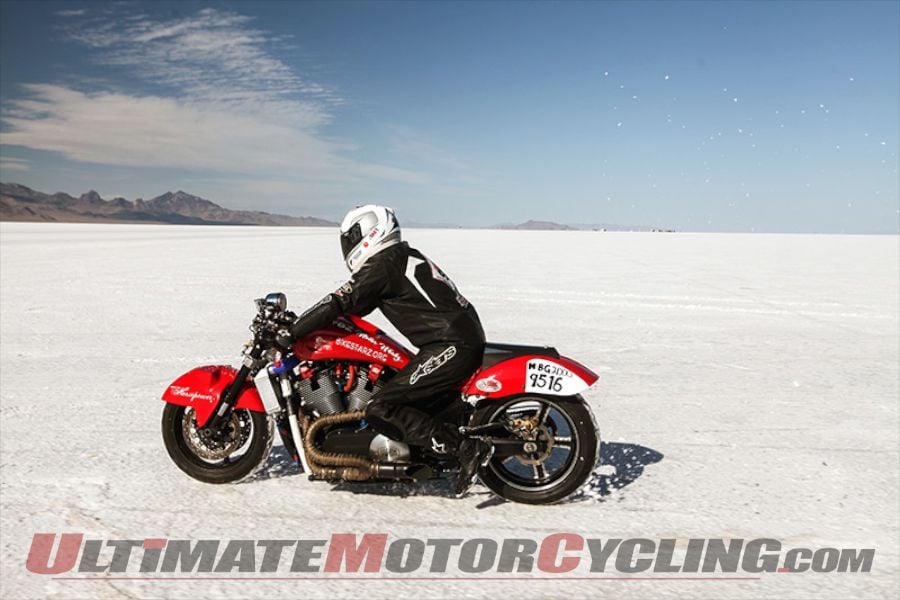 Helping with Horsepower Bike Rebuild ProgramThe Helping with Horsepower Bike Rebuild Program uses a motorcycle as a tool to keep kids in school. The program teaches life lessons such as teamwork, self-confidence and problem solving and, in this case, to go fast enough to set an AMA Grand National Land Speed Record.The program was developed by Laura Klock of Klock Werks Kustom Cycles. In a collaboration with Victory Motorcycles and Pine Bush High School’s Starz Program, Helping With Horsepower set that new land speed record while providing a learning experience for at-risk youth.Lloyd Greer of Lloyd’z Motorworks partnered with Victory to implement Laura Klock’s curriculum and lead the at-risk youth, hands-on, as they built a Victory Hammer motorcycle for the speed record attempt on the legendary Bonneville Salt Flats this past August.The Freedom 106 powered Victory was modified with a Procharger B-1 Supercharger and special tuning to deliver more than 200 HP, capable of achieving the 2014 AMA Bonneville National M-BG/2000 Record of 173.223 MPH with Brian Klock at the controls.“We are proud to be part of this special program.” said Steve Menneto, VP Motorcycles for Polaris. “Using Victory motorcycles to teach our youth the value of hard work and achieving goals is a terrific way to contribute to the future.”You can witness the Helping with Horsepower achievement at Bonneville on YouTube. The record-setting Victory and the team will be in the Victory Motorcycles booth at the International Motorcycle Show in New York City Dec. 12-14.