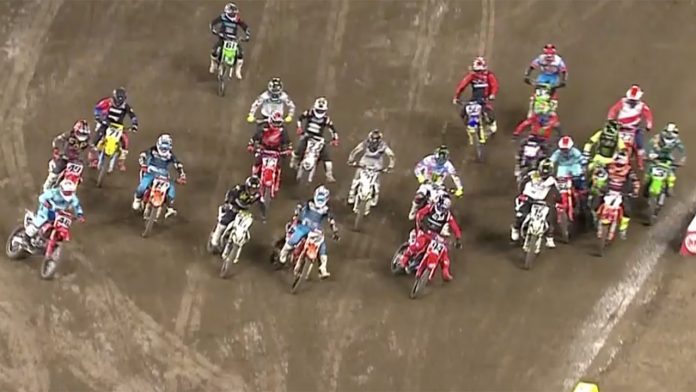 Eli Tomac made it three winners in three races on three brands in the 2020 Monster Energy Supercross Championship Series as he overcame a mid-pack start to take a comfortable Anaheim 2 win in Angel Stadium. Last week’s winner Ken Roczen took P2 after leading the seven opening laps, and leaves A2 with the points lead. Cooper Webb made it two podiums in Anaheim for 2020 with a steady ride to P3.Grabbing the holeshot, Roczen (Team Honda HRC) took an early lead with Blake Baggett, Zach Osborne, and Aaron Plessinger in hot pursuit. Baggett (Rocky Mountain ATV-MC/WPS/KTM) fell on lap 4 at the entry to the spit-lane section, putting him out of contention. Osborne (Rockstar Energy Husqvarna Factory Racing) was dropped to P6 by lap 3 (of 24), and Plessinger (Monster Energy Yamaha Factory Racing) getting blitzed and fading out of the top 10 by lap 5. Roczen’s lead extended to five seconds in the aftermath of the Baggett crash, with Webb (Red Bull KTM) taking up the job of chasing down Roczen. However, Tomac (Monster Energy Kawasaki) had been slicing through the pack, passing multiple riders per lap before taking over P2 on lap 5. Tomac was clearly the fastest rider on the track, and was the only racer turning in 52-second lap times. It took Tomac three laps to catch and easily pass Roczen for the lead on lap 8. By lap 13, Tomac had built up a five-second lead and cruised to the win. Tomac played it safe on the final two laps, making the final result look closer than it was. Roczen had looked secure in P2, but Webb made a late run at Roczen. However, Webb came up 1.2-seconds short at the checkers.Jason Anderson (Rockstar Energy Husqvarna Factory Racing) had an uneven night. Anderson started in P6, held a podium position for six laps before the midway point, but slid back to P4 when Webb passed him on lap 11, back another spot when Adam Cianciarulo passed him a lap later, and Osborne got by three laps later. Anderson eventually got back by Cianciarulo (Monster Energy Kawasaki) for a P5 finish. Anderson’s teammate Osborne also moved up and down the leader board. Starting the race in a podium position, Osborne found himself in P6 by lap 3. Osborne stayed there until lap 14, when he went by Anderson for P5. Osborne moved up to his final P4 finishing position when he passed Cianciarulo on lap 17. Cianciarulo was the fastest qualifier in the afternoon, and ran as high as P4 on laps 12 through 16, but was not able to mount a podium run before fading to P6.With the early season points volatile, Roczen takes the red plate from Justin Barcia, who was riding sick. After going 1-2 in the first two rounds, Barcia struggled to P9 at A2, costing Barcia the red plate. Barcia is three points shy of Roczen, and two points ahead of Tomac—A2 is Tomac’s first podium of 2020. Anderson stays P4 in the standings, while Cianciarulo drops two spots to P5. The spread from leader Roczen to Cooper Webb in P6 is just 13 points. The cream of 2020 Monster Energy Supercross has risen to the top, with the six leading riders in the standings accounting for all nine podium positions in the first three rounds. No rider has made the podium in all three Main Events in 2020, though Roczen, Barcia, and Webb have done it twice.Next week, the 2020 Monster Energy AMA Supercross Championship Series moves to Glendale, Ariz., at State Farm Stadium for round four. Webb, Anderson, and Osborne will be looking to make it four winners on four brands in four races in 2020. Check and bookmark our 2020 Supercross TV Schedule for the times for the live cable and streaming of qualifying and racing.