When I was down at Kawasaki headquarters to pick up a motorcycle for testing, I spied a 2019 Kawasaki Versys-X 300 ABS festooned with Kawasaki accessories. I immediately laid claim to it, as it seems like a natural extension of the Versys theme. I threw on a pair of Shinko Adventure Trail tires, and took the Versys-X 300 for some off-road fun and long-distance riding.

Without any doubt, the Shinko rubber gave me the confidence to take the Versys-X on more than the best-groomed dirt roads. While the Versys-X is capable of fairly challenging off-roading with the stock IRC Trail Wing tires in the right conditions, the Shinko Adventure Trail tires are much more suited to low-traction conditions. However, with tires alone, the plastic and motor remain vulnerable if you fall. Plus, there’s no hand protection. 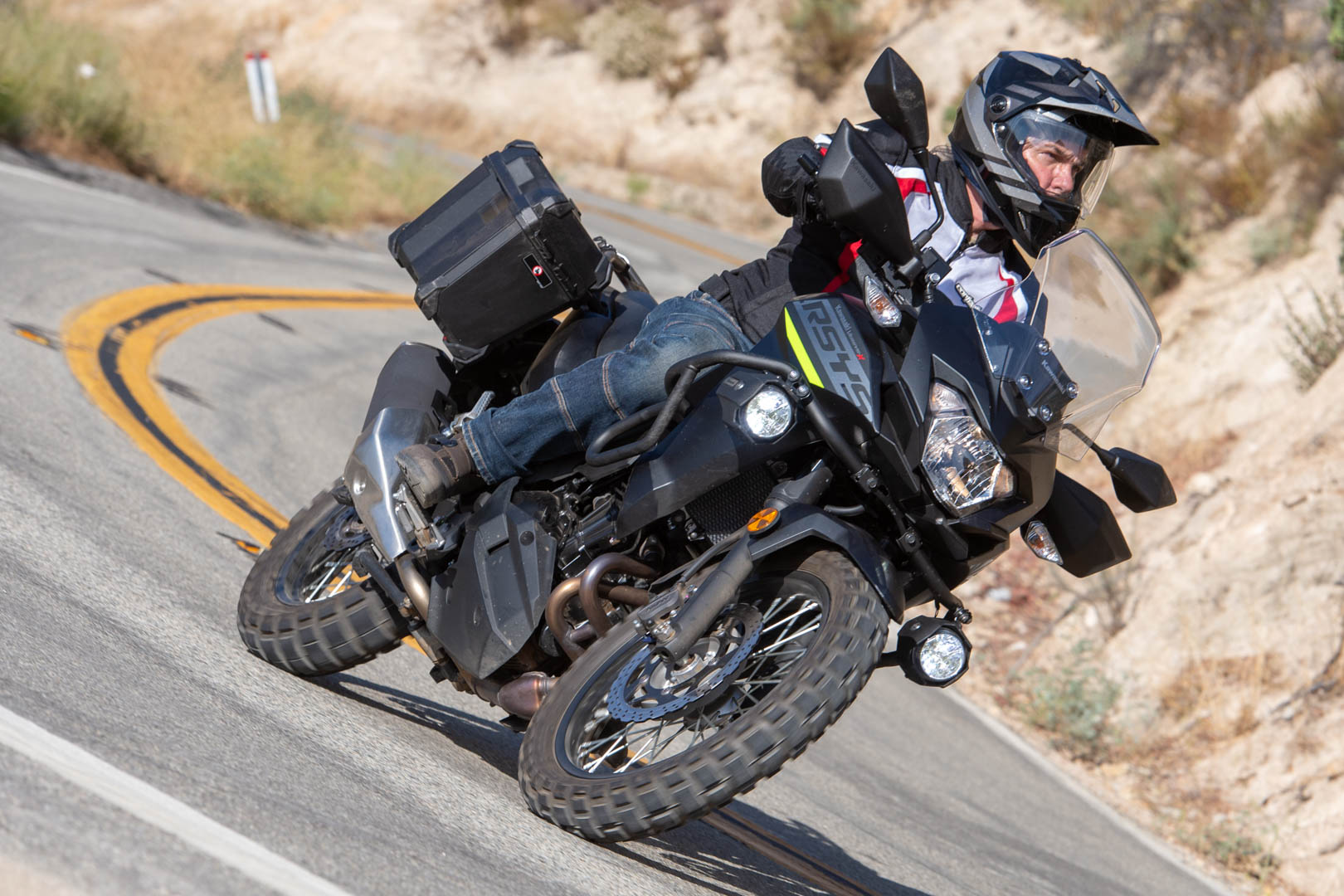 With Kawasaki’s engine guard, handguards, and centerstand, I felt more confident about taking the Kawasaki Versys-X 300 seriously off-pavement. I could do some bushwhacking without damaging a digit, and the engine guard reduces the chances of damage should I drop the Versys-X.

If I need to do some maintenance, the centerstand is always welcome, and the light weight of the Versys-X makes it easy to use. The twin LED accessory lights make me feel more visible on the pavement, and do light the way better after dark—always a possibility when I go out on an adventure ride.

The right tires always make a huge difference. It’s amazing where you can take a street-only motorcycle if you throw knobbies on it. When you put big ADV knobs on a 400-pound adventure motorcycle with a 19-/17-inch rim combo, all of a sudden new doors open for off-road exploration.

While it is still an adventure motorcycle rather than a dual-sporter that weighs 100 pounds less, the Kawasaki Versys-X 300 can take on some pretty gnarly roads with the Shinko Adventure Trail; a relatively low seat height helps. Tackling a few semi-serious jeep trails—something that requires 4WD—the Versys-X was up to the task. 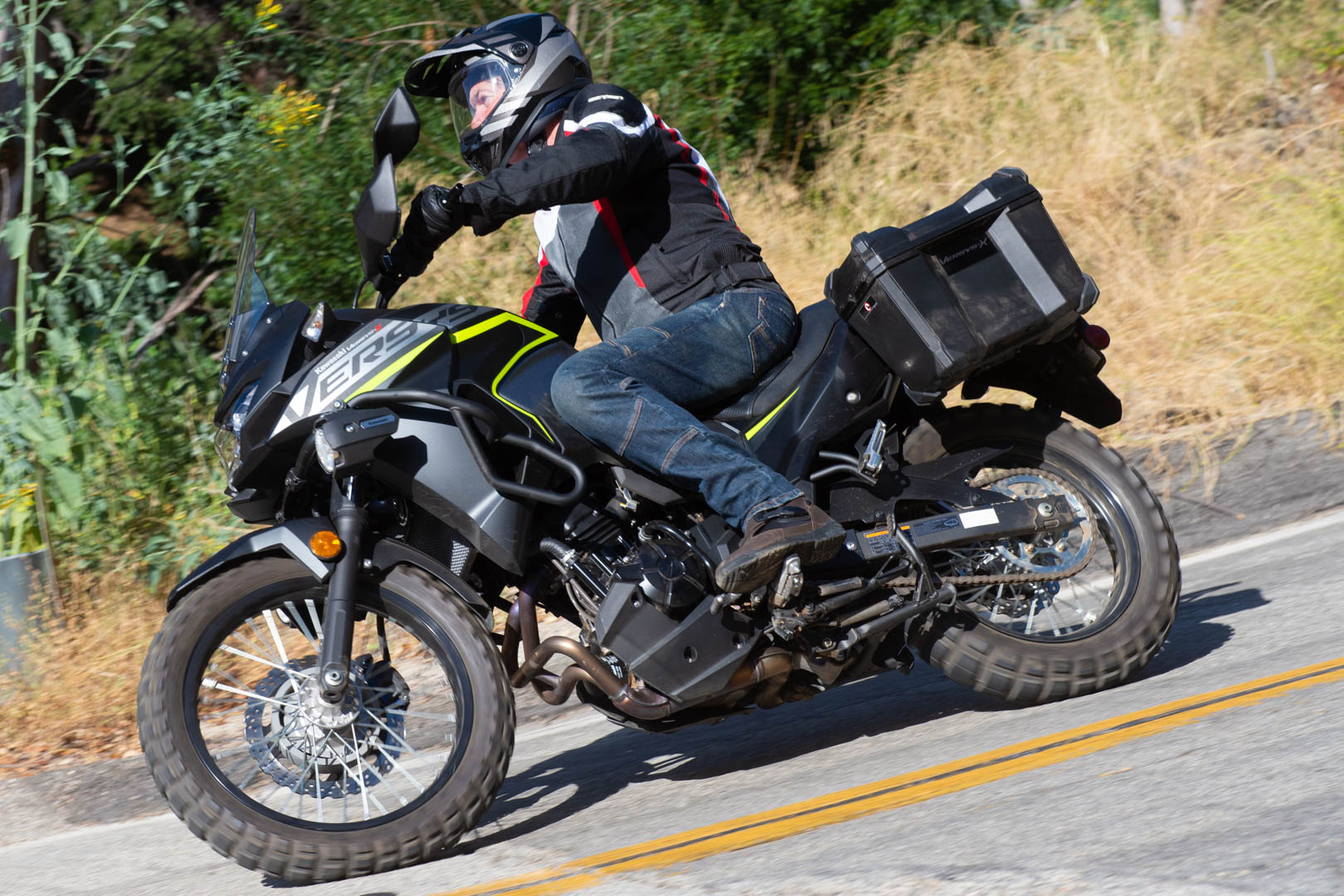 The little parallel twin, displacing just 148cc in each cylinder, is hardly a torquer. Yet, it has just enough pull that it doesn’t require spinning up the revs to go anywhere. It allows picking lines at lower speeds, and then slipping the durable clutch as needed. The fat Shinko tires offer some cushion for the wire-spoke wheels, and when aired down to about 20 psi, work both on- and off-road.

With dirt-oriented adventure tires, the limiting factor of the Versys-X is not the handling or the motor. Instead, the shortcomings of the suspension become apparent quickly. The suspension is non-adjustable, with just over five inches of travel in the front and a bit less than six inches in the rear.

That means keeping the speeds reasonable and the wheels on the ground. Don’t even think about jumping, and lofting the Versys-X’s front wheel over obstacles is not a viable option. You have to plow your way through the rough stuff, and the Shinko tires make that possible, even on highly rutted, rocky roads. 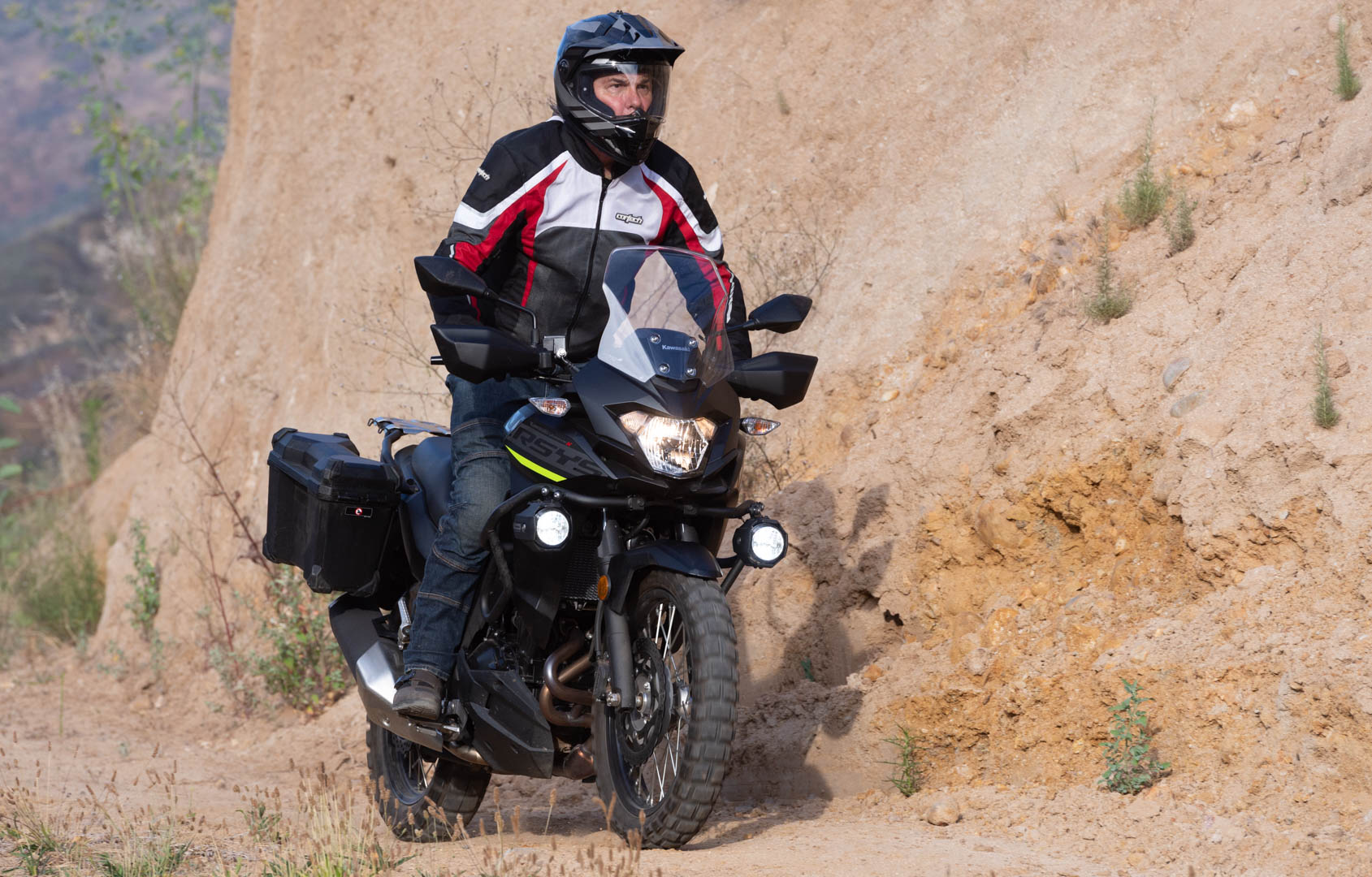 Single-track trails are doable, as long as they aren’t too tight or technical. The Kawasaki handguards do their jobs flawlessly, protecting hands from some of the nasty vegetation that our local mountains and deserts have to offer. The LED lights mounted on the engine guard came out of the battles with nature unscathed.

One accessory not offered by Kawasaki that would be helpful is larger footrests. Although the footpegs on the Versys-X are adequate for the street, they are too small for off-road work. The stock pegs do not provide a confident platform for boots when bouncing around in the dirt.

Testing the non-ABS version of the Versys-X 300 was fortuitous off-road—the lack of ABS intervention is a positive. The braking is predictable with the Shinko tires in the dirt, as well as on the road. The Versys-X also lacks traction control, another plus for this off-road-focused ADV build.

Instead of instantaneous cornering, the 300 moves its way into and through corners deliberately. A bit more exertion is needed to complete turns, though less corrective effort. 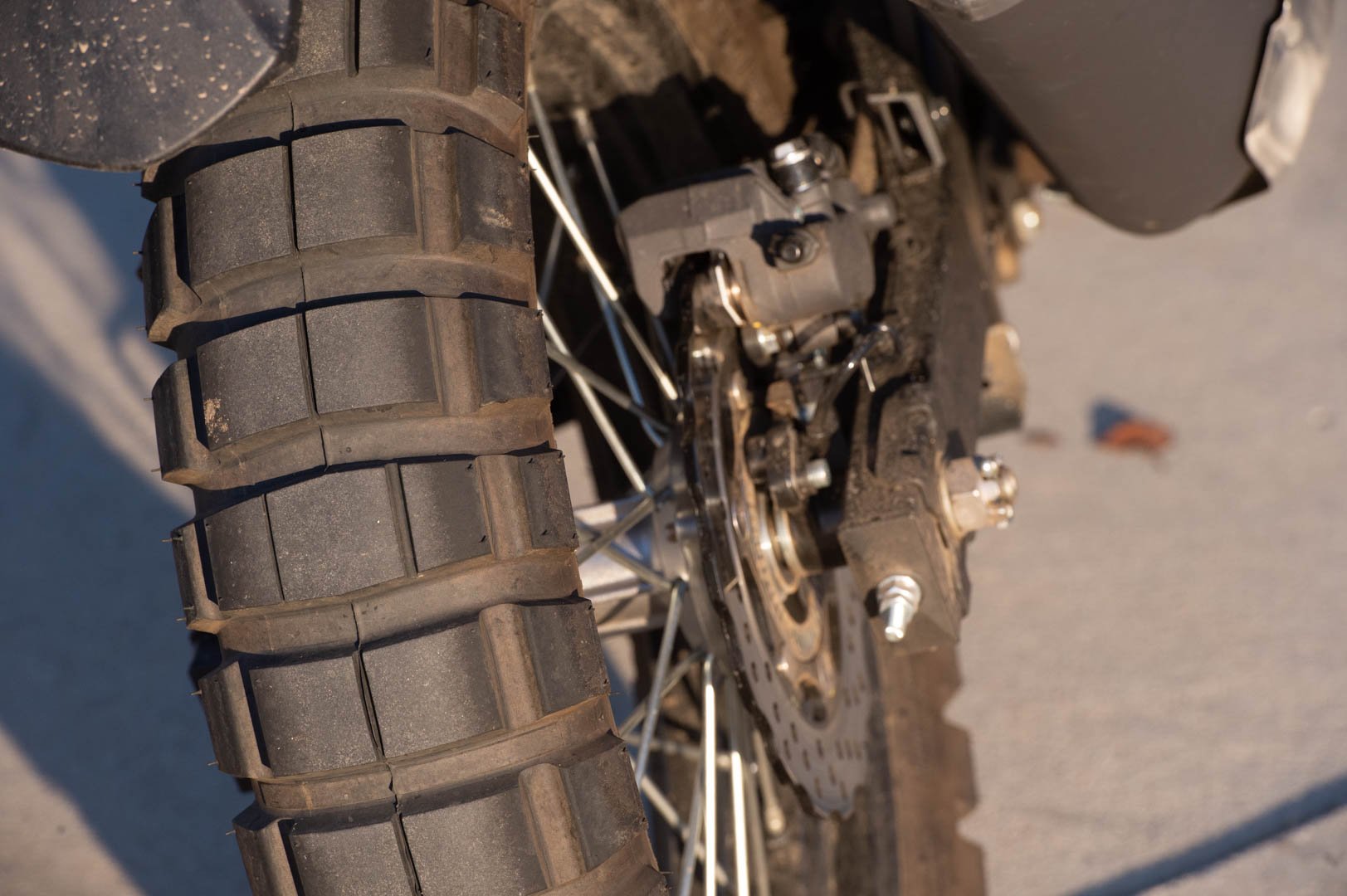 The chubby tires do slow down acceleration. That means a heavier throttle hand is needed, especially when exiting corners, unless you want everything to feel like it is happening in slow motion. Certainly, there are many things to be said for slower handling on an adventure-touring motorcycle that tends toward agility. At freeway speed, the Versys-X with the Shinko tires is inarguably more stable.

At $440, the 17-liter saddlebag set is a deal. While Kawasaki calls them “hard”, I would describe them as pliable. They aren’t soft bags, but the plastic on them is far from rigid. They do feel cheap compared to bags than can run well over $1000—shocking. The lids require jiggling to fit, and the lock deters only casual thieves.

Regardless, the bags hold enough for a weekend run, and their flexibility should make them decently durable in the case of an off-road tip-over. They won’t dent and, should one get damaged, replacing it won’t be as hard on the wallet as aluminum panniers. They are appropriate for a motorcycle that retails for $5499.

The main thing holding back the Kawasaki Versys-X 300 on long-distance rides is the need to run it at high engine speeds on the open highway. Although the motor doesn’t vibrate all that much at the 8k to 9k rpm needed to do battle on the freeway, there still is a fatigue factor with that much spinning beneath you. For touring through the mountains or on other lower speed backroads, the Versys-X does a much better job, as long as you aren’t in a hurry.

Reworking the 2019 Kawasaki Versys-X 300 into an authentic adventure tourer keeps the primary rationale for the smallest Versys intact, while expanding its capabilities. At the end, you’ll be in for about $7000, and you get a personalized motorcycle that is successful at everything from urban commuting to off-the-grid off-road riding.