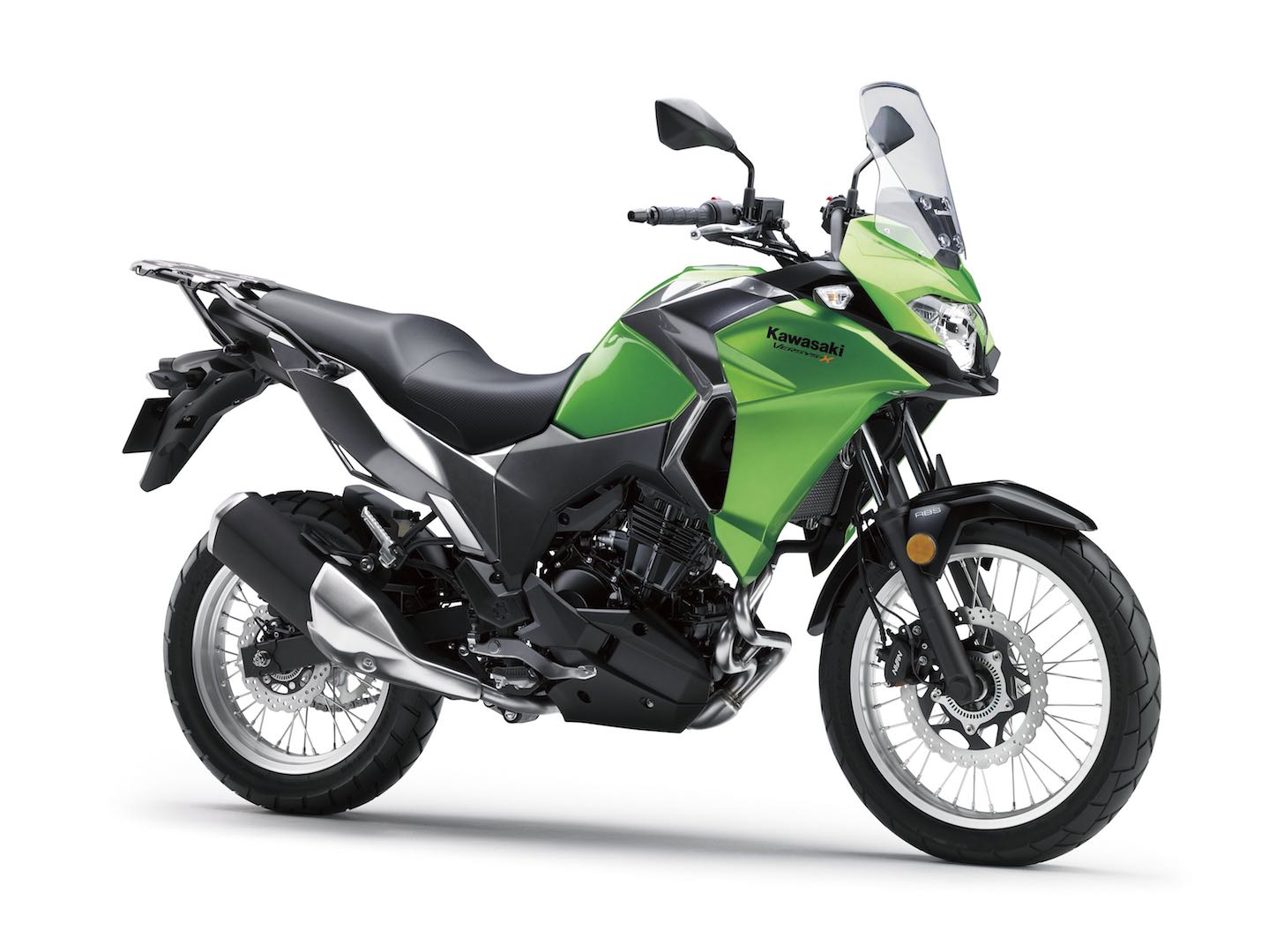 The 2017 model year is shaping up to be diverse for the motorcycle market. One trend from manufactures is a renewed interest in lower-displacement machines–and the new 2017 Kawasaki Versys-X 300 certainly fits that bill.The Versys-X 300 is Kawasaki’s latest ADV offering. The brand-in-green has set its sights on not just the adventure touring markets, but also the youth and beginner markets; until recently, these markets weren’t truly associated with one another. We’re excited to see what the Versys-X 300 is capable of, but until we can romp around on some streets and trails, here are the Ultimate Motorcycling Fast Facts. 1. The 2017 Kawasaki Versys-X 300 powerplant will make use of a fuel-injected 296cc parallel-twin engine. Based upon the liquid-cooled, 4-valve engine found in the Ninja 300, the Versys-X is getting a revised version of that tried-and-true powerplant. The Versys-X is retuned for an emphasis on low- to mid-range power delivery. This will create optimal power when negotiating a trail or commuting to work.Kawasaki engineers have made several changes to the base engine, which include lightweight pistons, and an optimized airbox and intake, among others. All changes aim to encourage efficiency and usability.[Visit the 2017 Motorcycle Previews page] 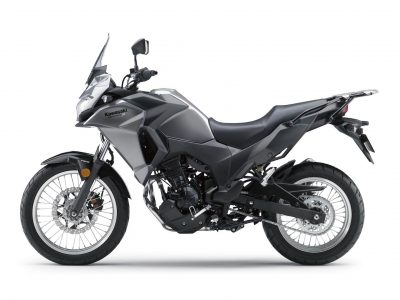 2. Kawasaki’s Assist & Slipper clutch feature is standard on the Versys-X 300. This feature is a wonderful addition to a bike that is aimed at bringing new riders into the fold. The assist feature reduces the amount of effort needed to actuate the clutch, meaning that a new rider shouldn’t have difficulty with the shifting aspects of riding. Perhaps more important is the slipper clutch, which should help new riders from inducing rear-wheel hop, stalling, and engine lock-up.The Assist & Slipper clutch makes the Versys-X 300 more approachable for new motorcycle riders. 3. A new ADV focused exhaust awaits. As you’d expect, the Versys-X exhaust is different from the Ninja’s street-only design. Header pipes have been pulled closer to the engine, allowing for more clearance on this adventure-touring minded machine. Kawasaki claims that low- and mid-range power have been enhanced due to the new header layout. 4. The Versys-X has an air management system to reduce heat. Ask anyone who rides performance twins—heat dissipation is an issue. However, Kawasaki has mulled this problem over and presented an answer with its Kawasaki Air Management System. This system reroutes hot air to the lower region of the bike, and away from the rider. 5. The Versys-X 300’s 4.5 gallons of fuel should allow you to go the distance. Optimal fuel consumption always comes down to how you’re riding, but with 4.5 gallons, we expect the Versys-X 300 to have an impressive range. This will help riders have longer excursions away from civilization. 6. Off-road style wheels are needed for tackling the trails. Kawasaki didn’t disappoint in this department. The Versys-X features a 19-inch/17-inch wire-spoke wheel combo. The setup will improved handling in low grip situations, along with more stability when riding on inconsistent terrain. Plus, there is a good choice of tires in these sizes. 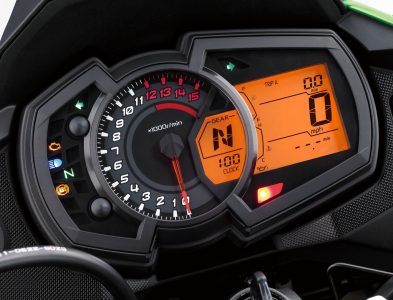 7. The Versys-X 300 appears to be making use of the same braking components as the Ninja 300. From what we can tell, the 2017 Kawasaki Versys-X 300 is borrowing a braking system from its road-faring cousin, the Ninja 300. Up front, the Versys-X 300 arrives with a single 290mm petal style rotor with a dual-piston caliper, and in the rear, a 220mm rotor with its own dual-piston caliper. 8. ABS is optional aboard the 2017 Kawasaki Versys-X 300, and not at a premium price. The ABS option is expected to be just $300 more the standard version. At that price-point, new riders would be doing themselves a huge favor by springing for that extra level of safety, especially if you ride in wet climates. 9. The Versys-X 300 features a new chassis. Dimension information isn’t available, but Kawasaki is utilizing the engine as a stressed member of the chassis. One key element is a narrow profile around the seat, which provides an easier reach to the ground. 10. Adventure-touring oriented ergonomics and pleasantries are part of the deal. An upright riding position combined with a tall windscreen and wide handlebars, will keep riders comfortable for many miles to come. 11. A modern instrument panel. A multi-function, digital and analog display provides just about everything you could ask for. At a quick glance, riders will have access to a gear-position indicator, fuel range, and temperature—all among the standard information set motorcyclists have come to expect. 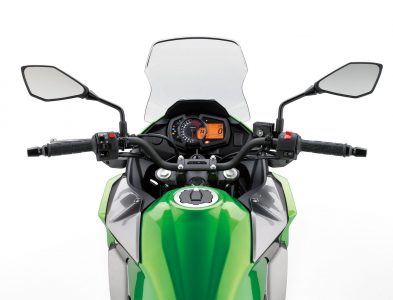 12. Long-travel suspension will help negotiate rides off the beaten path. The Versys-X 300 features non-adjustable 41mm telescopic forks, and a rear shock with adjustable spring-preload. Given that this 300 is suited for some off-road use, we expect that spring-rates have been reduced in order to deal with the rigors of trail riding. 13. Off-road oriented accessories will be available at the point of purchase. Should your heart desire, Kawasaki is offering a tall seat option, handguards, a centerstand, and a skidplate. All of these accessories are can be quite handy, and as the old adage goes: “Better to have it and not need it, then need it and not have it.” Getting slapped on the knuckles by some brush at 40 mph isn’t all that comfortable. 14. Affordability is the key with lower displacement machines. Kawasaki originally announced that the MSRP of the 2017 Kawasaki Versys-X 300 ABS will be $5699, and the non-ABS model $5399, but has since said the price of the two versions of the Versys-X is still to be determined. The Versys-X 300 will be available in either Candy Lime Green/Metallic Graphite Gray or Metallic Graphite Gray/Flat Ebony.We’re excited about the Kawasaki Versys-X 300. It has a lot of potential to satisfy entry-level markets—just the type of thing that the motorcycle industry needs. That’s all the information we have on the 2017 Kawasaki Versys-X 300, so let’s pass it onto the readers: Who do you see flocking to the 2017 Kawasaki Versys-X 300? Would you consider adding one of these to your stable for a newbie interested in tagging along on rides? Let us know in the comments.