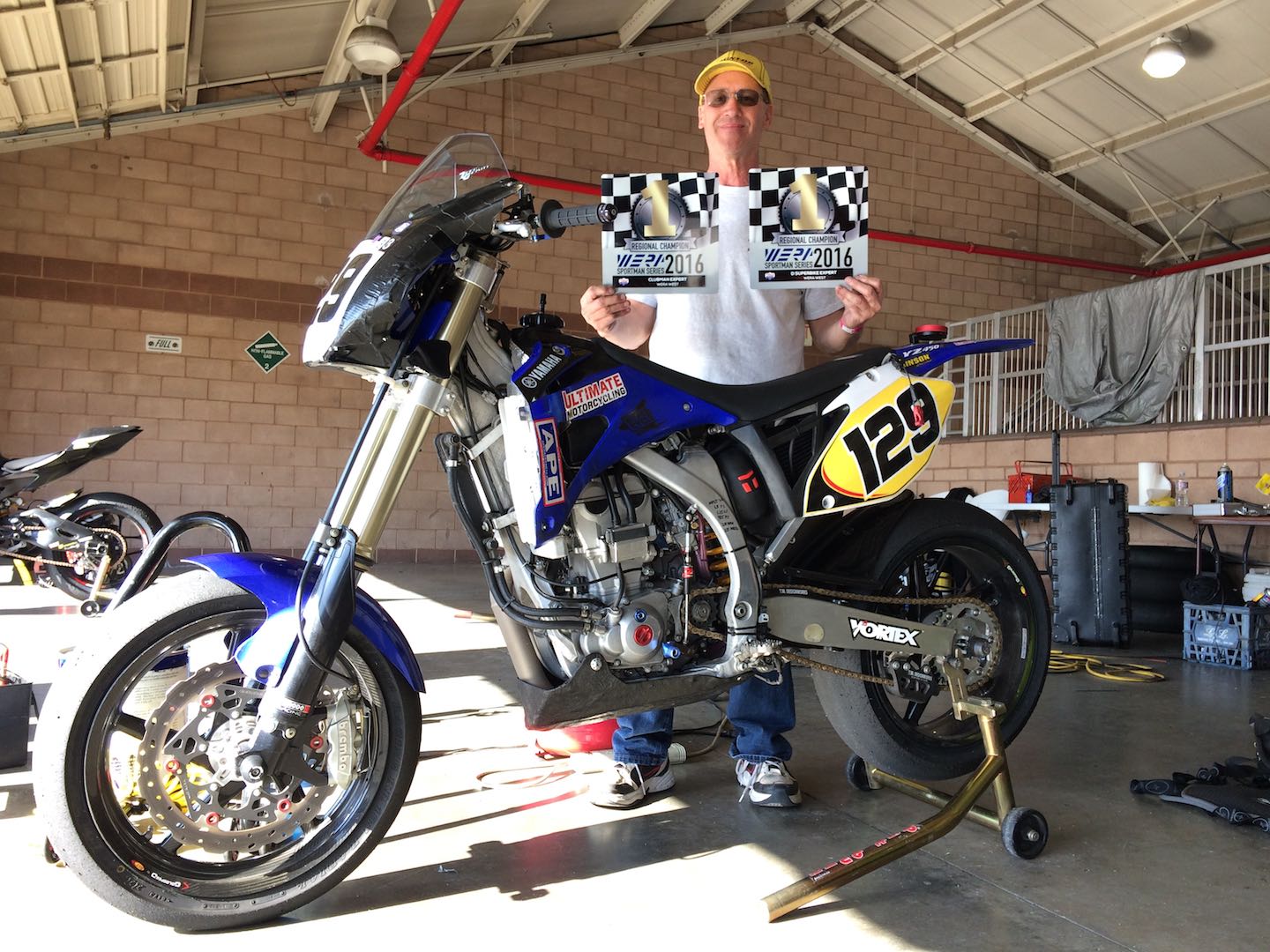 As a motorcycle racer, having OCD is both a blessing and a curse. It is a blessing in that it generates a lot of focus toward preparing race bikes and racers alike for the task at hand. It can be a curse in that it is expensive, time consuming, and dangerous.But it can also be magical in that moment, when traction, speed, balance, and courage all align. The high you get when you do it all just right is what racers pursue.After last year’s hectic season I needed to take a break to recover physically, mentally and financially. I spent some time in late October afield in South Dakota pheasant hunting with Christopher Jundt and family, and some Tru Brittany hunting dog alumni that we had bred.In November we whelped and raised a litter of really nice Brittany puppies. Puppies are a lot of work, but they also bring a lot of joy for us and their new owners. These things combined really helped to recharge my spiritual batteries.Preparation for the 2017 racing season started in earnest not long after crossing into the New Year. I already had most of the parts I needed to build a new motor. I took inventory, ordered what was needed, and started preparing the parts already in hand. All parts were solvent washed and inspected, bagged and labeled. (Here is where OCD comes in handy). A few new tricks were employed, and it was all assembled, installed, and started in the bike 2 weeks before my first track appearance March 7-9 at Auto Club Speedway.Even with as much success as I have had on my self-built YZ450F race bike, I recognize that there are many fast guys out there for whom I normally don’t have enough talent to compete. But that is not to say that my bike is not fast enough. It is down a bit on top speed, but it is light and has a good acceleration, and handles really good which I think can still make it competitive in certain select classes. So to that end I had invited Zach Harrington, a KFG (Known Fast Guy) SoCal 600cc class racer, to test and race my bike in selected events. This weekend would be his first time on the bike.

I signed up for a half-day track day just to be able to break-in the new motor and re-familiarize myself with the track. It also gave me a chance to make sure everything on the bike was working as expected. Right off the bat the engine was cutting out under acceleration.That was a simple fix, as it was simply the quickshifter linkage needed re-adjusting due to the new motor’s slightly different shift shaft indexing. I also discovered that I was under-geared, as I had forgotten to change gearing since the last round at Las Vegas Motor Speedway. I managed to run 3 sessions, and my lap times were decent, but not great. I changed the gearing and put the bike up for the night.

Rain was present early Saturday morning, but clearing expected. The first rotation was cancelled, so I went out in the second and third rotations. It was kind of a waste of time, as traffic was so heavy that laps times were 4-5 seconds slower than the day before.Zach rode his own Yamaha R6 in the morning, but was ready to try my YZ450F after lunch. He went out during the 1:30 session and adapted quickly, and he beat my best time EVER by the 5th lap of his session. He loved the bike, and said there were a couple of more seconds in there easy. This confirmed him as a good choice of rider.He went out in the 2:30 session, but it was cut short by a bad wreck in turn 1. That shut down the track for over an hour with the complete 3:00 rotation being cancelled. But an announcement came over the loudspeakers that the 4:00 rotation was ready to go.Out went Zach, and he was hauling the mail right away. But he didn’t come around on the 3rd lap, so something was wrong. Was it the bike? Did he crash? I trotted back to the garage and waited for what seemed like a really long time. And then the crash truck showed up.Zach had gone too deep into Turn 12 at the end of the back straightaway. He bulldogged the bike to make the right hand turn, but washed out the front wheel when he flipped it back left for Turn 13. Damage was mostly cosmetic. It needed new bars, grips, left footpeg, and front fairing.I had all of those parts at home, so I left the track to gather up the parts and planned to arrive at 6:00am the next morning for repairs. Meantime, I took off the wheels and got a fresh set of Dunlop slicks mounted. I also dropped another tooth off the rear sprocket, as the new motor was pulling strong and hit top speed well before the start/finish line due to the great drive Zach was getting out of the final turns.

Repairs went smoothly, but took a little longer than expected, causing me to miss the first of 2 practice sessions. Since I had already had plenty of seat time, I sent Zach out in the 2nd session to confirm that our gearing change was correct. He knocked another two seconds off his time from the day before, so that answer was “Yes”!First race up was Clubman Expert. I was gridded last, as I had not scored any points this year. (Apparently being last year’s champion counts for nothing.) Also in the race was fellow YZ450F racer Yuri Barrigan (of Isle of Man fame), and a couple of fast kids on KTM RC390’s. One of them was Gray Pham, new track record holder at Chuckwalla Valley Raceway, so I knew there would be no slacking.The flag dropped, and Yuri led into the first turn, with one of the KTM’s next and with me slotted into third. I followed them both for the first lap, but got a good drive coming onto the front straightaway and took the lead into Turn 1. Gray showed me a wheel at Turn 9 on the third lap, forcing me to “pull the pin” and check out. Two more laps and I was taking the checkered flag, with a comfortable three-second lead.1st Place Clubman Expert – Rittner

I normally don’t compete in this class, as the most common bike (Suzuki SV650) has too much speed to overcome. However, my friend Lance Lewman would be racing, and I thought it would be fun to try to race with him. His lap times from January were about a second faster than my best, but that did not seem an unreasonable stretch.We gridded up, and when the flag dropped an unfamiliar SV650 (Phil Murray) powered into the lead. Heading into the Turn 3 chicane I braked really late and rode around the outside of him, taking the lead. However my glory was short lived as he out-powered me on the back straightaway, and out-rode me pretty much everywhere on the track. Try as I might I continued to lose a few tenths per lap. But even in losing, my lap times were pretty good with a personal best 1:44.3 on the last lap.Meantime Lance had stalled his bike on the start and had to work his way through the pack to get 3rd place.   I was about 30 seconds ahead in second, and about three seconds out of first at the checkered flag. Lance’s lap times showed he had the speed, and it would have been a good fight. I’ll coach him on starting line technique, and we can try again to battle another day. J

This was Zach’s race. I was expecting a couple of KFG’s who had been at the January round to show up, but they were no-shows. The only real competition was Yuri, and though he did not have enough for Zach that day, he did pull out some respectable lap times during this race.Zach won this race with a best lap time of 1:43.6, compared to my best in the previous race of 1:44.3. He had already run a 1:42.8 in practice with some minor bike issues, so I’m still convinced he can reduce his laptimes down to the 1:41’s easily. That should be more than enough for those KFG’s to handle when we catch up with them. You guys know who you are. We are waiting for you.1st Place D Superbike Expert – Zach HarringtonThis weekend had its challenges: Unpredictable weather, some bike tuning issues, some crash repair. Nonetheless, it was a successful outing for me as the new engine ran well, I ran my fastest lap ever after a 6 months absence, and my sponsored rider showed his speed. Overall a pretty good start to my 2017 race season.I should note that I have been claiming for the last 6 months to be “cutting back” on my racing and diversifying my activities in a way that is more respectful of my age. My plan for this season is to race every track I’ve won at one more time and then semi-retire. Retiring is turning out to be harder to do than I had imagined. It must be the OCD.Marc Rittner
WERA Expert #129Riding StyleRead previous reports from Ultimate MotorCycling Amateur Race Report, Racing Past 60:Thank YousNone of my racing success would have been possible without the support of my sponsors and friends. First and foremost I would like to thank Arthur Coldwells and Ultimate Motorcycling for believing in me and providing me with the opportunity to represent them and write about my racing experiences. His encouragement gave me motivation throughout the season to do my best.Other sponsors and friends include: