Eventually, everybody makes a bucket list. I made mine over 15 years ago for the approaching Y2K, and included some things that I imagined as pure fantasy:

– Other dreams even less likely to be realized

I have ridden motorcycles continuously in one form or another for over 40 years:  Cafe Racers, Production road-race bikes, Dirt Bikes, Sport Tourers, and Naked Sportbikes.

I started doing occasional track days in 2009, somewhat improving my skills, but not nearly at the rate of increase of my unchecked ego. And though I may have fancied myself an accomplished canyon rider, my reality check came in the fall of 2012 when I crashed a friend’s Husky SM610 Supermoto and broke my foot. Understand that it was bad enough to break my foot, but the greater damage was to my ego when it caused me to miss a High Sierras sporting ride with all my ex-racer buddies. 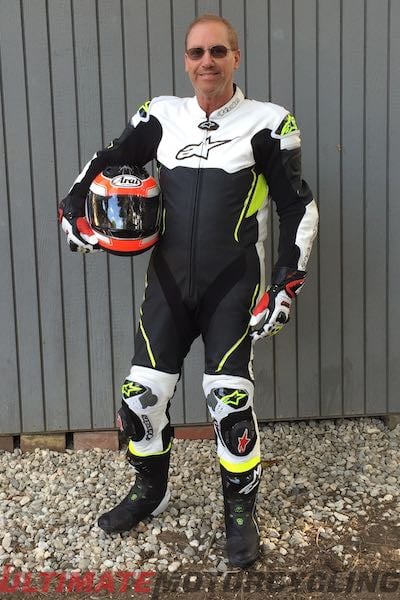 I have a history of not taking failure well. In the early 80s a friend of mine introduced me to pheasant hunting.   I knew little of hunting, and less of shotgunning, so needless to say that my poor marksmanship resulted in a lot of missed birds. After a particularly humiliating 1985 pheasant hunt, I resolved that I should improve my shotgunning skills.

I went down to the Kern County Gun Club in Bakersfield, Calif., where a friendly group of sportsmen took me under their wing and taught me to shoot. By the end of 1987, as a rookie season shooter, I ended up rated AA in all classes, and was selected for the National Skeet Shooting Association All-American Rookie 1st Team, and California State Rookie of the Year (both honors shared with my shooting partner, Rocky Lacertoso).

By now you should see where this is going. In the wake of the crash, I resolved that I should improve my riding skills. So in January, 2013, I entered my first motorcycle road race in 36 years, riding my Suzuki GSX-R 1000 track bike.

By March I had decided to participate in the Moto West Grand Prix Series and attempted to earn my Expert license. I encountered a similarly friendly group of racers who took me under their wing and taught me how to race. I abandoned the literbike in favor of racing a 2008 Yamaha YZ450F motocrosser that I converted into a Supermoto. This all resulted in me winning my first expert race by the end of that season. The hook was set.

My success continued over the next two seasons, winning races at nearly every track entered and earning two Class Championships. Now in my fourth season, and having reached 60-years old last September, I have decided to only compete in selected events in 2016.

Hopefully you will enjoy my stories, and gain some insight into the effort, engineering, thrills, and hardships of racing into my golden years. And perhaps you will be inspired to work on your own bucket list items.