The new and long-anticipated Suzuki GSX-R1000 has finally been announced, and initial glimpses see claims that will certainly make the wait worthwhile (if a little frustrating). No launch date was included and the bike is labeled as the 2017 Suzuki GSX-R1000 Concept model; as Suzuki relays news about precise availability and pricing, we will of course pass it on.

The teaser information makes the Concept sound as highly desirable as all the previous Gixxers, and unsurprisingly it will build on the latest MotoGP experience of the GSX-RR racebike currently campaigned by Aleix Espargaro and Maverick Vinales, the 2015 MotoGP Rookie of the Year.

Suzuki tell us that it is the lightest, most compact, most aerodynamic, and best-handling GSX-R1000 ever. The sportbike will feature a top-of-the-line electronics package that will include not just power modes and 10 levels of TC, but also full ABS, Launch Control, and a Quickshifter that also includes a blip-downshifter.

Other niceties include full LED lights from the headlight back, and the analog tachometer/digital speedometer has now been replaced with an LCD fully customizable “all glass” cockpit style instrument panel where the configuration can be personalized to the rider’s preference.

The GSX-R1000 Concept 999cc liquid-cooled engine stays with the beloved Gixxer inline-4 configuration, but internal developments make it sound intriguing. Judging by the video uploaded below, the engine will stay a conventional “screamer” and not to go to a different firing order or crankshaft configuration (similar to Yamah’s Crossplane idea).

Of course Suzuki claim it will be the most powerful Gixxer yet producing more peak power than ever without compromising low-down or mid-range output.  For the first time, Suzuki have developed a Variable Valve Timing system where steel balls are positioned in grooves in the intake cam sprocket and adjacent guide plate. When they move outward due to centrifugal force, the balls stack in different grooves during low and high rpm. In high rpm, the intake cam rotates and retards its timing, maximizing peak power. As the motor returns to low rpms, the camshaft then returns to the prior position.

Honda first produced a variable valve timing system (VTEC) on the Interceptor 800 sportbike many years ago; it worked well enough but it did give the bike a distinct powerband that hit at around the 6,000 rpm mark–and if you were in mid-corner at that exact moment it could produce a slightly disconcerting boost to power just about when you didn’t need it. However the Honda VFR800mused a completely different system than this new Suzuki one, and so we assume that this motor will not be plagued with a similar characteristic. 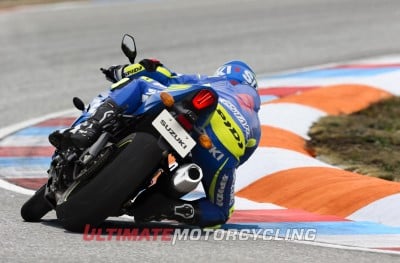 Likewise the the GSX-R1000 Concept’s valve train is now changed from a bucket-tappet system, to a ﬁnger-follower rocker arm type, that will improve the valve control, increase lift, and allow the motor to rev higher and thus increase peak output. There are secondary top-feed injectors located in the top of the air box that operate at higher RPM and this dual-injector design will also help produce greater top end power without detracting from low- and mid-range RPM output.

The exhaust has two servo-operated butterﬂy valves, one in each header balance tube. The valves remain closed at lower-rpm to enhance power, and then they open at higher rpms to add significant peak power.

Suzuki have always made the sweetest handling, best-turning machines out there and the Gixxer has a storied racing history to prove it. The new Concept’s twin spar aluminum frame helps make it the lightest GSX-R1000 ever. Suspension is by Showa at both ends, with a BFF (Balance Free Fork) that uses external damping circuits to equalize (or balance) the oil pressure above and below the solid internal piston as it moves.

Using external circuits instead of valve stacks allows smoother, more precise, and more consistent piston movement without the influence of unequal pressure or oil cavitation. External nitrogen-charged oil reservoirs are also used to further stabilize suspension action. At the rear the latest iteration of Showa’s BFRC Lite suspension is significantly lighter than before. As the BFRC shock piston moves, oil is pushed through external damping circuits, through a valve stack and back into the shock, on the other side of the solid piston. The Suzuki GSX-R1000 Concept’s system balances pressure on both sides of the piston, allowing smoother, more consistent piston movement and damping. The difference can be felt on the racetrack, with riders reporting better feel, more cornering grip and improved drive grip.

The 2017 Suzuki GSX-R1000 Concept is fitted with more aerodynamic MotoGP-inspired bodywork, and it is more compact, sleeker and narrower, in order to increase aerodynamic efficiency. Lift at speed has been reduced compared to the 2016 GSX-R1000’s bodywork, thanks to a smaller frontal projected area. Even the fairing mounting bolts have been redesigned, with a new flat-top shape to reduce air resistance. Other mounting hardware is recessed to prevent turbulence. The fuel tank has a lower top and a sleeker shape, helping the rider tuck in more completely and easily. 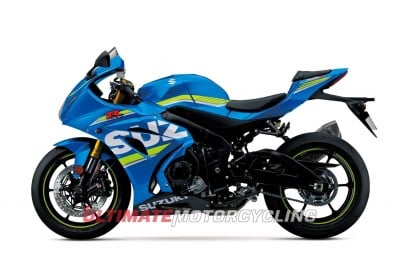 The new Gixxer gets an electronics package that includes Ride-by-Wire electronic throttle bodies, a 10-level Traction Control System that includes three different power modes and ABS. Both power mode and TC level of interference can be changed on the fly, with closing the throttle to activate the new setting; the compact ABS system samples the same data used by the TC.

Finally the 2017 Suzuki GSX-R1000 Concept gets a Quickshifter, and this one not only allows for clutchless upshifts, but also includes a blip-downshifter for increased rider-control during rapid deceleration. A launch control system is also included for the racers. It automatically limits the engine rpm and optimizes the torque delivery so the rider can hold the throttle twist grip wide open and concentrate on feeding in power via the clutch lever for the best possible race start.

The 2017 Suzuki GSX-R1000 Concept sounds as though Suzuki will have a winner on its hands–not just on the racetrack but in the showrooms as well. We can’t wait to ride the new superbike and will return with a full ride report just as soon as we are able.