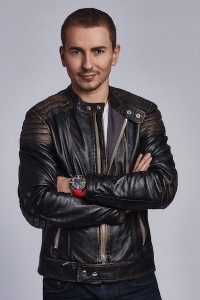 With three MotoGP championships to his credit, it was only a matter of time before reigning MotoGP Champion Jorge Lorenzo would become a member of the diplomatic corps. Tissot, the Swiss watchmaker that is also the Official Timekeeper of MotoGP, has selected Lorenzo to join Stefan Bradl, Thomas Lüthi, Tito Rabat, and Bradley Smith as a Tissot Ambassador.“We are very pleased to welcome Jorge Lorenzo to the Tissot family,” Tissot President François Thiébaud said. “His passion, courage, and fighting spirit fit with the values of Tissot perfectly. Our commitment to the world of MotoGP, and to our role as Official Timekeeper, is strengthened by our alliances with great athletes.”Tissot further explains that Lorenzo has “precision, elegance, and style,” which are essential qualities in a Tissot ambassador.For fans of Lorenzo and MotoGP, Tissot offers the T-Race MotoGP Limited Edition 2016 automatic chronography. It addition to the impeccable timekeeping that Tissot is known for, the dial has a carbon effect, as well as anthracite details. The displays on the Tissot T-Race MotoGP Limited Edition 2016 are intended to resemble those found on motorcycles, and the bezel is inspired by brake discs. The back of the strap evokes a tire tread.In addition to being the Official Timekeeper of MotoGP, Tissot also is responsible for measuring time for FIM World Superbike, the Tour de France, and the UCI World Cycling Championship, and well as stick-and-ball sports, such as the NBA, FIBA, CBA, and European Rugby Champions and Challenge Cups. Tissot was founded in 1853 by Charles-Félicien Tissot and his son Charle-Emile. Innovations by Tissot include the Tissot Navigator (1951, self-winding with the ability to display 24 time zones without manipulation), the Tissot Astrolon (1971, the first plastic mechanical watch), the Tissot Twotimer (1986, the first wristwatch that had analog and digital time, and seven functions operated via a single crown) and the Tissot T-Touch Solar (20154, the first solar-powered tactile watch).