Last year at Daytona Bike Week, Victory Motorcycles unveiled the loudest factory bagger in the industry – the Magnum X-1.Victory claimed the bike was four times louder than the Cross Country, and two-times louder than the base Magnum. The X-1 featured 10 speakers and 200 watts of power. Besides this monstrous sound system, the bike, which sold out quickly last year, was also upgraded with trick paint and billet wheels – including a 21” front.Victory is once again ready to shatter the sound barrier of baggers everywhere with its new 2016 Magnum X-1 Stealth Edition. The X-1 Stealth again arrives with 10 speakers and 200 watts of power, a 21” billet front wheel, LED leads, stealth paint, and a price that is $1000 lower that last year’s Magnum X-1. 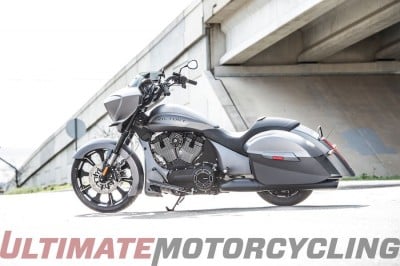 Based on the blinged-out Magnum, which is built upon the Cross Country platform, the Magnum X-1 Stealth Edition is highlighted by a monochrome style with “color-matched hinges, fender fillers, lower frame covers, dash, speaker grills and headlight bezel.”Next is sound – the Magnum X-1 Stealth Edition features 200 watts channeled through two 6×9 woofers and two tweeters in the saddlebags, as well as two 5.25-inch mid-bass speakers, two 2.5-inch mid-ranges and two more tweeters in the front fairing. Victory says the audio system fully integrates into any Bluetooth capable device, and features an informational window for input and song selection.The other highlights are the billet wheels. The front is 21” – the largest offered by an OEM – the rear a 16” with fat 180 rear tire. These wheels are machines from single block of aluminum to make them both “lighter and stronger to maintain the handling capabilities that have become a hallmark for Victory Motorcycles.”The Magnum X-1 Stealth Edition features “LED Concert Lighting,” which is inspired by a rock n’ roll laser show. The LED headlight is 74-percent brighter than a standard Victory headlight, and the bike arrives with thin blade LED turn signals and flush LED tail lamp.A host of accessories are also available for the 2016 Victory Magnum X-1 Stealth Edition, which has a starting MSRP of $23,499 ($23,749 CA, $27,999 CND). The bike will make its first public appearance at Daytona Bike Week, where it will be a featured demo model. For more information, visit VictoryMotorcycles.com.