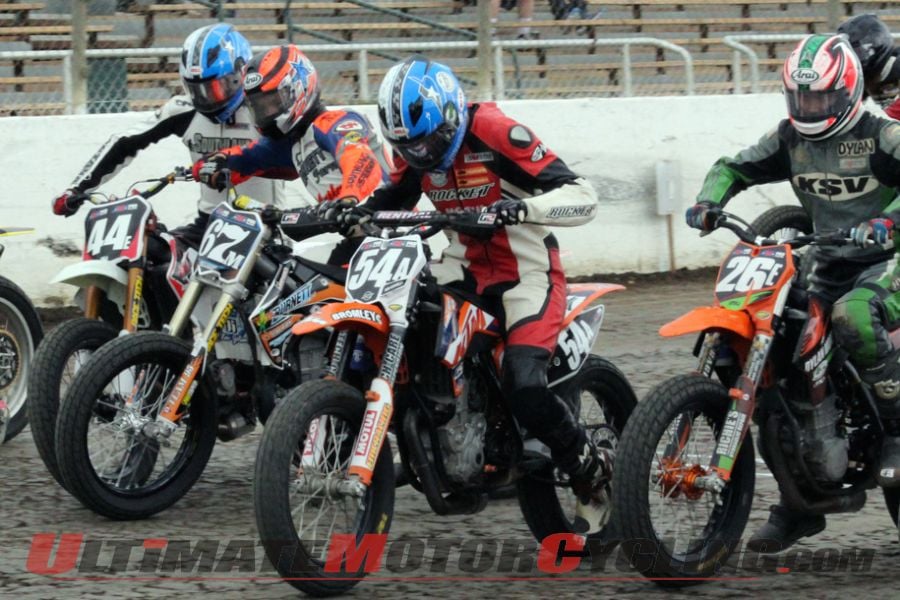 AMA Pro Flat Track Pro SinglesNo point in holding anything back now.This has to be the mindset of the AMA Pro Flat Track Pro Singles riders who make up the top four spots in this year’s current point standings as they gear up for the final two rounds, scheduled to take place in Calistoga, Calif., this weekend, and Pomona, Calif., two weekends after that to conclude the 2014 season.The chase for the championship is so tight at the top, that just 37 points separate the top four riders atop the feeder class’s leaderboard.Front-runner Kyle Johnson has 170 points to his credit and holds a 20-point lead over second place contestant Ryan Wells. Wells holds a mere eight-point lead over Davis Fisher (142) and Fisher remains just nine points ahead of fourth place rider Bronson Bauman (133). The competition thins out a bit after the first four slots, as 16-year-old Jarod Vanderkooi rounds out the top five with 115 points to his credit.Johnson, a Parkinson Brothers Racing product, has ridden his Honda CRF450R to four wins this season. His best string of success came earlier in the year when he ripped off three straight AMA Pro Singles victories at Knoxville, Lima and Hagerstown. Johnson’s rise to the top in just his second full season hasn’t come without adversity though, as he’s finished 14th or worse in three main events. Clearly the talent is there, but the question of whether or not Johnson can hold it together for the season’s final two events in an effort to obtain his first ever championship is an intriguing one, to say the least.Then there’s Albion, N.Y.’s Wells, the 18-year-old who fell one point shy of claiming his first AMA Pro Singles championship a year ago. The 2013 title chase between Wells and Wyatt Maguire was so close that it came down to the season’s final race at Pomona to decide who would be crowned. Wells’ 136 points fell short to Maguire’s 137, and Wells has had a bitter taste in his mouth ever since. Wells is entered to compete aboard his KTM/GE Capital KTM 450 SX-F this weekend at Calistoga and will look to perform well enough to again put himself in position to win it all at Pomona in October.Fisher has undoubtedly been the most consistent rider in Pro Singles competition in 2014. Having podiumed in every race he’s competed in but two, the 16-year-old would like nothing more than to claim the championship at the conclusion of his rookie season. If it weren’t for a crash during the Indy Mile in August, Fisher would be right on Johnson’s tail for the top spot heading into the final two rounds. Instead, the incident caused the Warren, Ore. product to miss out on valuable points and he has yet to compete in a race since. However, Fisher appears to be healthy again and is entered to compete aboard his T.J. Burnett Farms Honda CRF450R this weekend at Calistoga.Though Bauman may have a slim chance of claiming his first AMA Pro Singles championship, he sits in fourth and 37 points off the top spot, which is well within striking distance for the Salinas, Calif., product. To Bauman’s credit, he has come on hot as of late, finishing a season-best second at Peoria and fifth at Colonial Downs. Watch for him, aboard his Rod Lake Racing Honda CRF450R, to give his opponents a run for their money this weekend at Calistoga.The results and outcomes for this weekend are hard to even make predictions for, but one thing is for certain, it’s going to be a great show for all parties involved. For anyone unable to make it out west, live flag-to-flag coverage of the entire Calistoga Half-Mile will be available for viewing on www.FansChoice.tv. For fans that to plan on coming out, tickets and more information regarding the event can be found at www.flattrackcalistoga.com/.How to Watch:FansChoice.tv will be the official home for live streaming coverage of AMA Pro Flat Track and AMA Pro Road Racing events in 2014. The site will also provide coverage of IMSA’s development and single-make series, and NASCAR’s touring and weekly series.