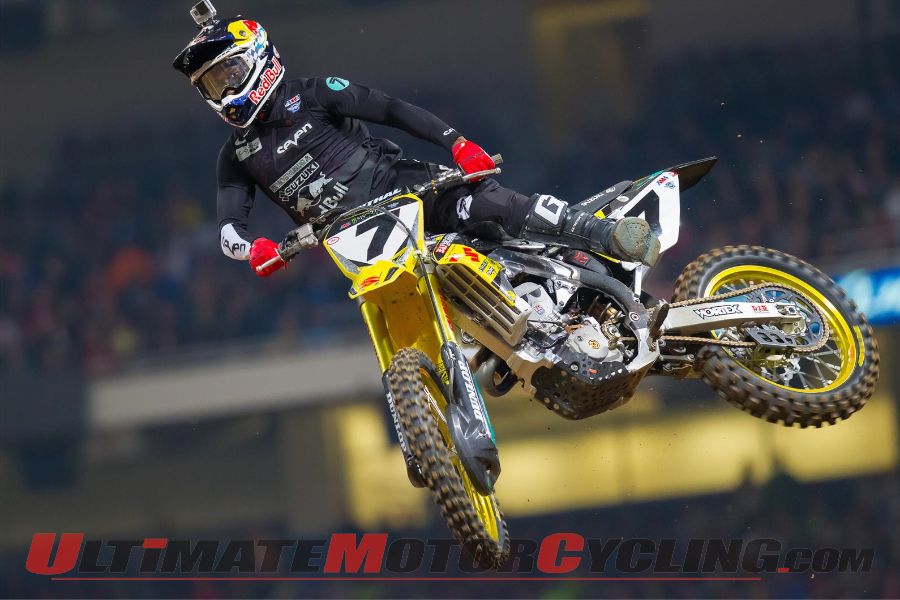 Yoshimura Suzuki NewsYoshimura Suzuki’s James Stewart continued to display his winning ways Saturday evening at Edward Jones Dome in St. Louis.The two-time Supercross Champion of Florida not only took his fifth win of 2014 SX – the most of any rider after 13 of 17 rounds – he also earned his 50th 450SX career victory. This was also his third-straight victory of the season, a feat not completed since 2009. With his win at Detroit over a week ago, Stewart broke his tie with Ricky Carmichael for the second-most wins in history. He only needs 22 more to tie the overall leader, Jeremy McGrath.Stewart was quick from the beginning at St. Louis Supercross; after setting the fastest lap of practice, he piloted his Yoshimura Suzuki RM-Z450 to second in his heat race. During the race, he got off the line in third, but on lap 10 passed Monster Energy Kawasaki’s Ryan Villopoto for the lead.Stewart then held onto the lead to finish ahead of three-time SX Champion Villopoto and Muscle Milk Honda’s Justin Barcia.“I don’t know what’s best, this weekend or last? Last weekend was obviously-special but to win again this weekend in a different State and to get a milestone like 50 race wins is unbelievable. I’ve got to give-it-up to the Yoshimura Suzuki team because we kind of had some issues all day but they came through for me in the Main Event,” Stewart says.“I feel like we’re riding really great and the Yoshimura Suzuki RM-Z450 was working amazing; especially through the whoops. It was a tough race and everybody was riding really good. But I was able to get in the lead and keep it going. Now we’ll just get ready for Houston and see if we can get another win there.”Yoshimura Suzuki Factory Racing’s next event is the 14th round of the 2014 AMA/ FIM World Supercross Championship on Saturday, April 5, at Reliant Stadium in Houston, Texas.