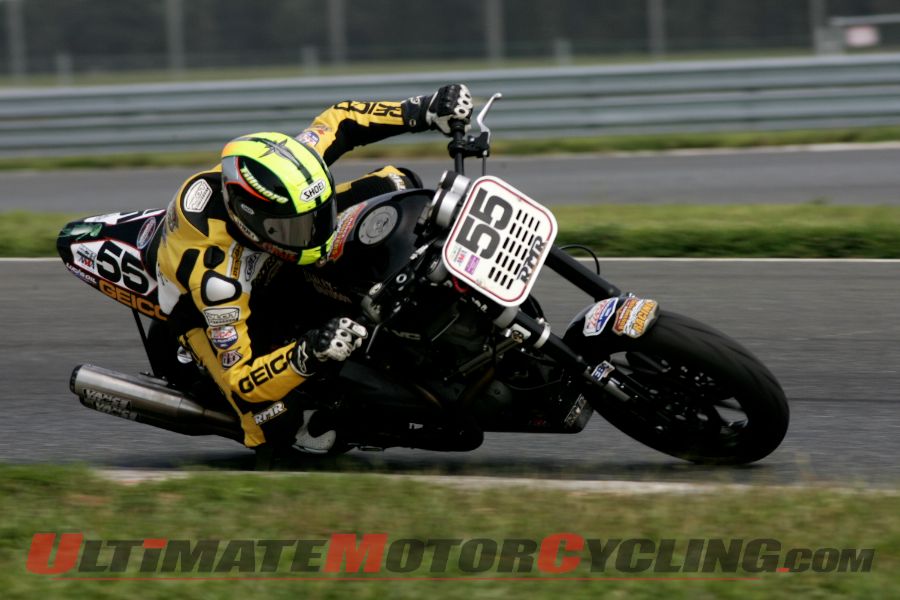 2012 AMA Harley XR1200 SeriesAMA Pro Racing has introduced the XR Showdown, a $60,000 year-end points fund that riders in the AMA Pro Vance & Hines XR1200 Series will be competing for during the 2012 AMA Pro Road Racing season.The XR Showdown, which is supported by Vance & Hines and the Harley-Davidson Motor Company, will be offered in addition to the $10,000 purse plus posted contingency available each weekend, meaning that well over $100,000 will be up for grabs over the course of the season.The XR Showdown will begin when there are five races remaining on the 2012 schedule. The top ten riders in the XR1200 Series point standings at that time will be eligible for XR Showdown points, which will be paid for each of the five remaining events on the schedule. The rider with the most XR Showdown points at the end will take home $30,000 in prize money, with the remaining $30,000 in the points fund to be paid out to second through tenth in the final XR Showdown point standings.David Atlas (Chief Operating Officer, AMA Pro Racing) says: “This further emphasizes the commitment from AMA Pro Racing, Vance & Hines and Harley-Davidson.“We want to send a strong message to our teams and riders that we will reward them for their efforts. The addition of the XR Showdown is sure to produce even more world-class racing action.”The AMA Pro Vance & Hines XR1200 Series, which was added to the AMA Pro Road Racing class structure alongside AMA Pro National Guard SuperBike, AMA Pro Daytona SportBike and AMA Pro Motorcycle-Superstore.com SuperSport at the Road America round of the 2010 season, features Harley-Davidson XR1200 motorcycles modified with a specially-prepared parts-and-accessories kit from famed motorcycle performance tuner Vance & Hines. The big twins are showcased in a single-race format during each AMA Pro Road Racing event weekend except for the Red Bull U.S. Grand Prix at Mazda Raceway Laguna Seca.The XR1200 Series produced fast, intense and competitive racing at each round during the 2011 season. Bruce Rossmeyer’s Daytona Racing/GEICO/RMR’s Chris Fillmore was engaged in a season-long battle with Parts Unlimited rider Steve Rapp, and the 2011 championship came down to the season finale at New Jersey Motorsports Park. Fillmore led the Sunday final event flag-to-flag on the way to his fifth win of the season and the coveted No. 1 Plate.AMA Pro Racing has announced contract renewals for seven tracks on the 2012 AMA Pro Road Racing schedule. Of the seven events announced so far, the incredible footpeg-dragging action of the AMA Pro Vance & Hines XR1200 Series will be featured at six: Daytona International Speedway in Daytona Beach, Fla. on March 15-17, Infineon Raceway in Sonoma, Ca. on May 4 – 6, Miller Motorsports Park in Toole, Utah on May 25 – 28, Road America in Elkhart Lake, Wis. on June 1 – 3, Barber Motorsports Park in Birmingham, Ala. on June 22 – 24 and New Jersey Motorsports Park in Millville, N.J. on September 7 – 9. The remainder of the 2012 calendar, including events conducted in conjunction with promotion by M1 Powersports, will be announced shortly.The inclusion of the AMA Pro Vance & Hines XR1200 Series makes AMA Pro Road Racing one of the most cost-effective platforms for racing on the national stage. During the 2011 season, a total of 22 Harley-Davidson dealerships supported XR1200 Series teams and riders through sponsorship. The continuing support from the strong network of Harley-Davidson dealers across the country ensures that thousands of new fans from the Harley-Davidson street riding community will get to experience the non-stop action of AMA Pro Road Racing in 2012.Keep up with all the latest on the AMA Pro Vance & Hines XR1200 Series by going to amaproracing.com, vanceandhines.com/xr1200 and harley-davidson.com.