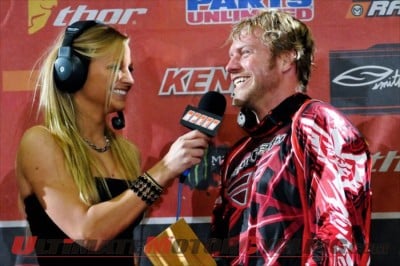 2011 AMA ArenacrossWith the 2011 AMA Arenacross Series just three rounds from completion, Team Faith Yamaha’s Kelly Smith, of Ludington, Mich., decided to take matters into his own hands on Saturday night and end a long-standing winless drought inside Verizon Arena.In Arenacross Lites class action, newly-crowned Arenacross Lites Western Regional Champion Chad Cook, of Oklahoma City, Okla., kept the ball rolling, grabbing an impressive win.In recent weeks, just one man has stood atop the Arenacross class podium. Babbitt’s Monster Energy/TiLUBE Kawasaki presented by Maxxis rider Tyler Bowers, of Danville, Ky., carried an eight-race winning streak into the evening. However, the current championship points leader experienced trouble, ultimately losing valuable points to his competitors.As the gates dropped on the 25-lap Arenacross main event, Smith took advantage of a strong start and moved into the lead early. Once out front, the veteran rider never looked back, despite experiencing several challenges from Foremost Insurance/Spinechillers/HondaofFairfield.com’s Nathan Skaggs, of Chillicothe, Ohio.As the battle for the win developed, Bowers was experiencing some rare bouts with misfortune. After suffering a bad start, Bowers looked to work his way through the field, only to stall his bike following the finish. The error allowed his competitors to take advantage while Bowers fought to work his way back through the field.As for Smith, he rode his best race of the season, along with Skaggs who ultimately brought home a season-best runner-up finish. Babbitt’s Monster Energy/TiLUBE Kawasaki’s Chad Johnson, of Rhinelander, Wis., rounded out the podium in third.Bowers fought his way to a season-worst 11th-place result.With the adversity Bowers faced in addition to a strong night from both of his closest title contenders, the advantage in the championship dropped to 38 points.Feeling the confidence from claiming his first career professional title one week prior, Cook put his House of Kawasaki machine up front again and extended his own personal winning streak to three races.He crossed the line over four seconds ahead of Foremost Insurance/Spinechillers/HondaofFairfield.com’s Patrick Massie, of Washington Court, Ohio, in second. Massie’s podium effort extended his points lead in the Arenacross Lites Eastern Regional Championship. Letko KTM’s Tanner Moore, of Auburn, Kan., finished third.Massie’s advantage over the field now sits at 51 points.The AMA Arenacross Series continues next weekend with two nights of action from the MetroCentre in Rockford, Ill. Both nights of action begin at 7 p.m. CT.Arenacross Class Results (Little Rock, Ark.)AMA Arenacross Lites Class Results (Little Rock, Ark.)Arenacross Class Points (After Race 16 of 19)Eastern Regional Arenacross Lites Class Points (After Race 8 of 10)New for 2011! Live timing and scoring from each round of the AMA Arenacross Series. To follow the intense racing action live, log onto Arenacross.com.