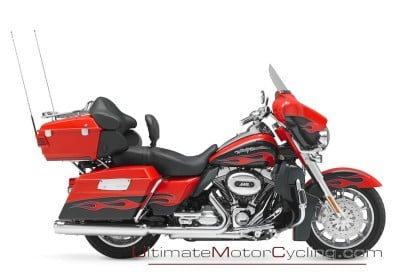 2010 Harley ModelsHarley-Davidson roars into 2010 with nine new motorcycle models, the most expansive new-product introduction in the history of the Motor Company. Across six model platforms, Harley-Davidson achieves a fusion of tradition and technology in a motorcycle product line that offers more power, luxury, and style, and more value.“This ambitious new motorcycle launch reaches to our riders with the incredible passion that Harley-Davidson has inspired for more than a century,” said Bill Davidson, Harley-Davidson Vice President of Core Customer Marketing. “We are thrilled to offer our customers nine new models and a full selection of products for 2010 that lets their enthusiasm for enjoying great motorcycles continue at full throttle.”Highlights of the 2010 Harley-Davidson line include:>> As the new king of the Harley-Davidson Touring line, the Electra Glide Ultra Limited model delivers the performance upgrade of a Twin Cam 103 engine, and features standard equipment items previously offered only as accessories on regular-production Harley-Davidson Touring models.>> The new Road Glide Custom model looks lean and mean, with a slammed suspension, 18-inch front wheel and a new 2-into-1 exhaust system.>> The Wide Glide returns as an all-new Dyna model done in old-school chopper style, with black laced wheels, a chopped rear fender, black “wire” sissy bar, 2-1-2 Tommy Gun exhaust and an optional flame paint scheme. Priced starting at $14,499, the Wide Glide is also a great new value.>> The new Street Glide Trike brings stripped-down, hot-rod styling to the three-wheel category, and joins the Tri Glide Ultra Classic in an all new Trike family for 2010.>> Dressed in satin chrome and denim black, the new Fat Boy Lo presents a darker and lower interpretation of the motorcycle that still defines the fat-custom segment.>> The 2010 Street Glide model gets even more hot-rod soul, with updates that include a larger front wheel, slimmed-down exhaust, and a new tail light assembly. Street Glide takes a classic Harley-Davidson Touring profile to a low, light and lean extreme.>> No motorcycle on the road today matches the modern street attitude of the three exciting models in the Harley-Davidson VRSC family: V-Rod, Night Rod Special and V-Rod Muscle. The explosive performance of the liquid cooled Revolution V-Twin engine keeps VRSC at the top of the power cruiser food chain in 2010.>> The American motorcycle legend that is Harley-Davidson Sportster features six models for 2010, including the $7,999 Iron 883 introduced mid-year 2009 and four others priced less than $10,000.>> Harley-Davidson Custom Vehicle Operations (CVO), masters of shimmering chrome and bold paint, offers four new limited-production models for 2010. The CVO Softail Convertible is a versatile urban touring motorcycle, while the CVO Street Glide is a high-performance hot-rod bagger. The CVO Ultra Classic Electra Glide and CVO Fat Bob models are refreshed for 2010 with new paint schemes and styling details. All CVO models are powered by a Twin Cam 110 engine, the largest displacement V-Twin offered by Harley-Davidson.Harley-Davidson Motor Company, the only major U.S.-based motorcycle manufacturer, produces heavyweight motorcycles and a complete line of motorcycle parts, accessories and general merchandise. For more information, visit Harley-Davidson’s Web site at www.harley-davidson.com.