Starting as a naked 675cc triple in 2007, the Triumph Street Triple has grown to 765cc. Beginning this year, the motor is now the spec-powerplant for the Moto2 World Championship series.

Although the Street Triple hasn’t changed much since the introduction of the larger engine in 2017, we decided it was time to take a fresh look at the platform. The 2019 Triumph Street Triple R fits the bill perfectly, slotted in-between the budget-minded S model and the flagship RS variant.

At its introduction, the 765cc motor instantly garnered a rave review from anyone who experienced it—including us. It produces a lot more power than a typical 600cc middleweight and, although it’s not quite liter-bike level power, it never feels like it is lacking, even at the top end. 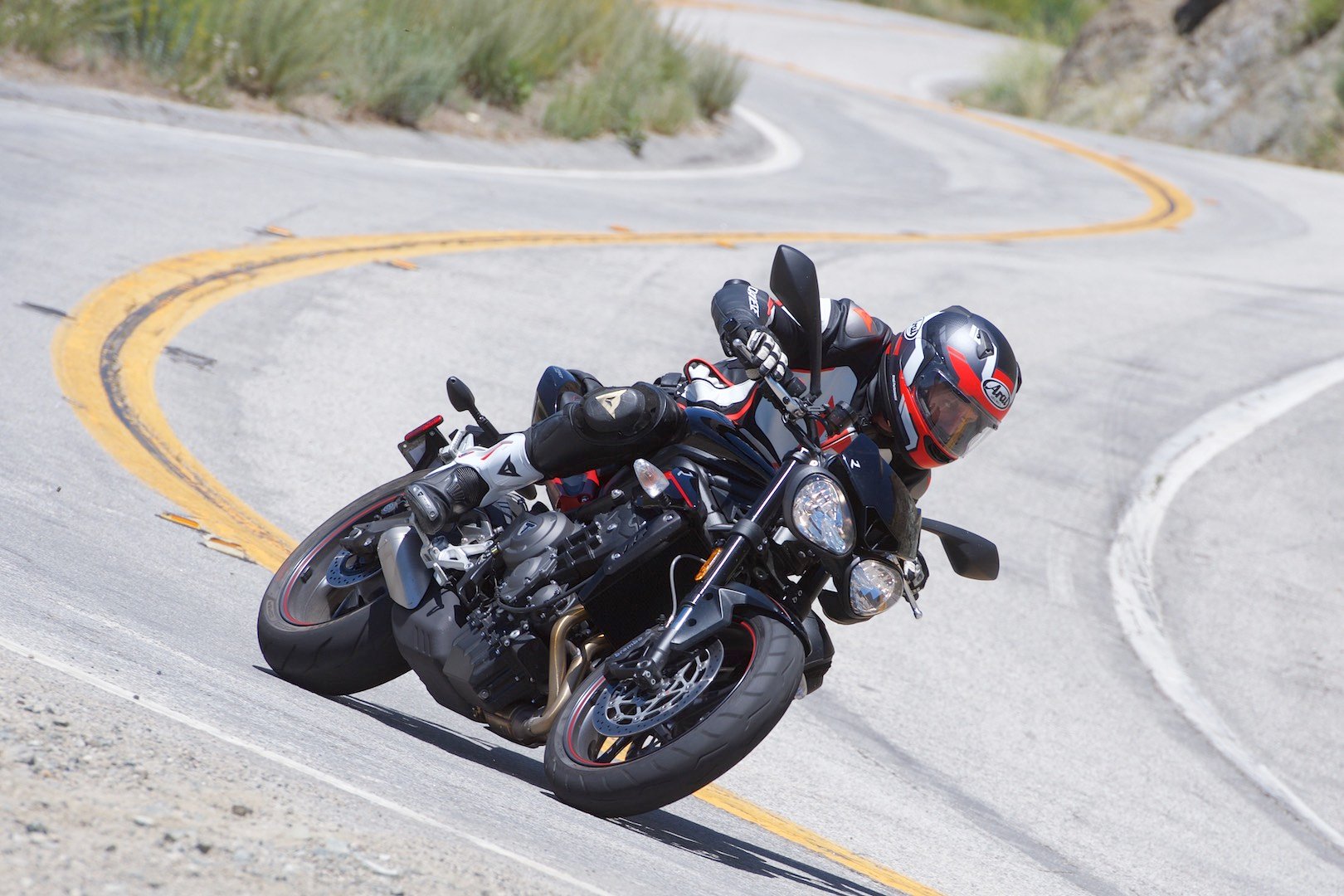 Peaking at 121 horsepower at 11,700 rpm, the three cylinders feel as though they put out a lot more power than those numbers suggest. Plus, that power builds to the rev limit without tailing off. Several times I hit the rev-limiter without being aware that I was anywhere near the redline.

The 2019 Triumph Street Triple R is light and responsive to ride; I was immediately at home on it. The 765cc inline-3 motor is potent, yet it has a smooth powerband. As powerful and torquey as it is, it is just friendly enough that I never feared a highside the way I do on liter-bikes.

In normal cruising, the motor has minimal vibration, and I love that burbling drone of the exhaust note. Of course, being a triple, it produces plenty of torque right from idle. Pulling out of very slow first and second gear bends, the motor doesn’t cough or hesitate. The Street Triple R’s engine simply makes strong, linear, predictable power with zero jerkiness at the throttle no matter which mode, so the bike’s agility can be relied upon and explored.

The Street Triple’s lovely six-speed gearbox is a pleasure to use, with no false neutrals and a firm feel at the lever. Even though this motorcycle is highly sporting in nature and willing to bring out the best in your riding, the R model doesn’t have a quickshifter; I’d like to see one fitted. I would certainly spec one as an accessory at the point of purchase. 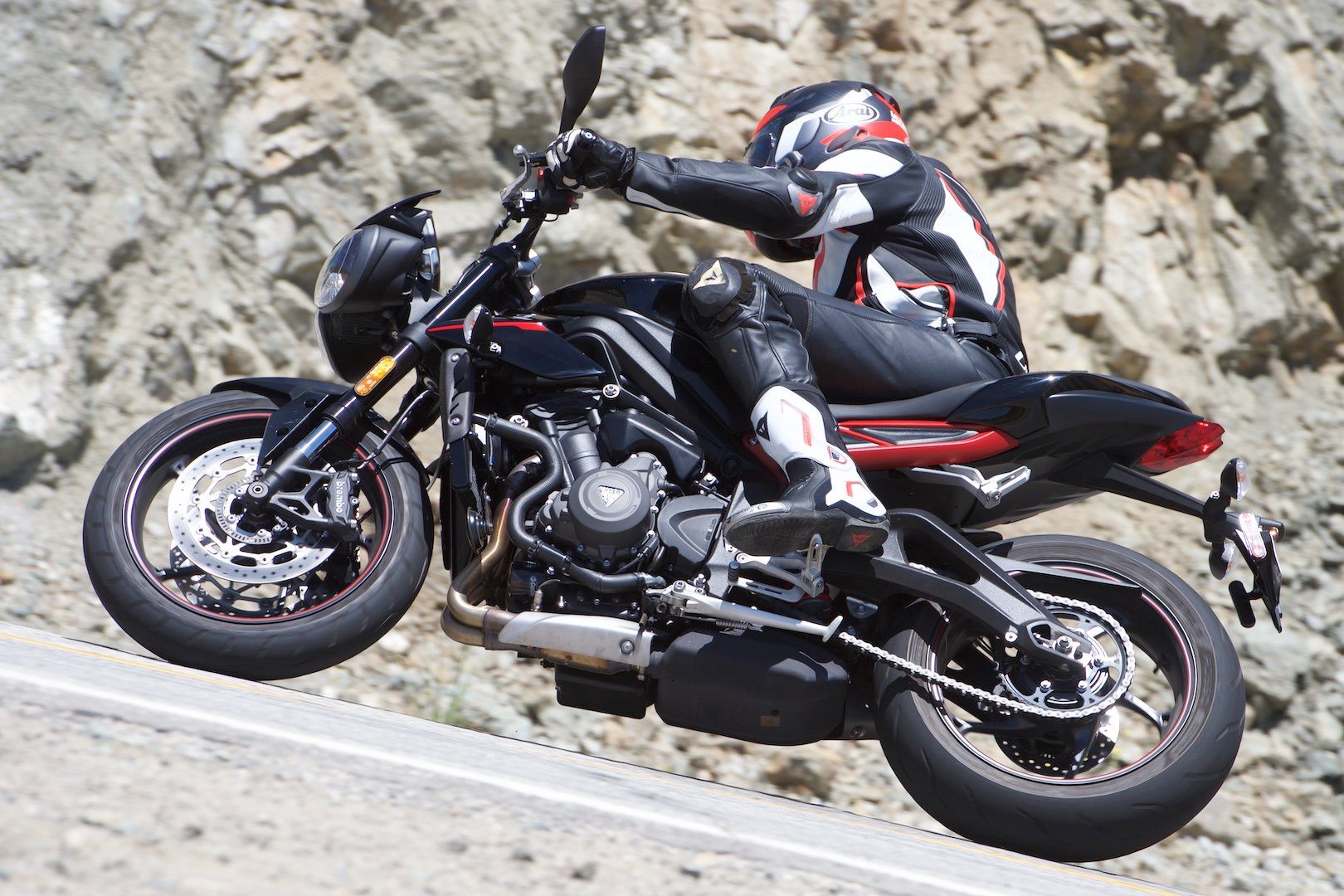 The electronics are less sophisticated than on the flagship RS model, but they are more than adequate for rapid street riding in the canyons or a fast-pace track day. Adjusted via a couple of intuitive handlebar buttons, the three riding modes of Sport, Street, and Rain are real-world useful and switchable on-the-fly.

The gorgeous color TFT instrument display has all the useful information you need, along with three different display versions. You can decide if you want the rev-counter or the speedometer to dominate your attention.

The Sport and Street modes adjust the level of aggression at the throttle, as well as reduce the level of intrusion for the two-level traction control. ABS intrusion is also reduced in the Sport mode.

Rain mode is noticeably less powerful and with more electronic interference; it’s an excellent way for less experienced riders to start out on the bike while finding their feet. Unlike a lot of high-torque motors with a somewhat jerky throttle, the Triumph Street Triple R doesn’t suffer at all in that way, even in the most responsive Sport mode, and it is so user-friendly that I stay with it full time, even when riding slowly in urban areas.

There is also a fourth programmable Rider mode, and that is the only way to turn off the traction control. Wheelie merchants will need to do that as the TC is quite intrusive if the front wheel tries to loft in one of the Triumph factory settings. 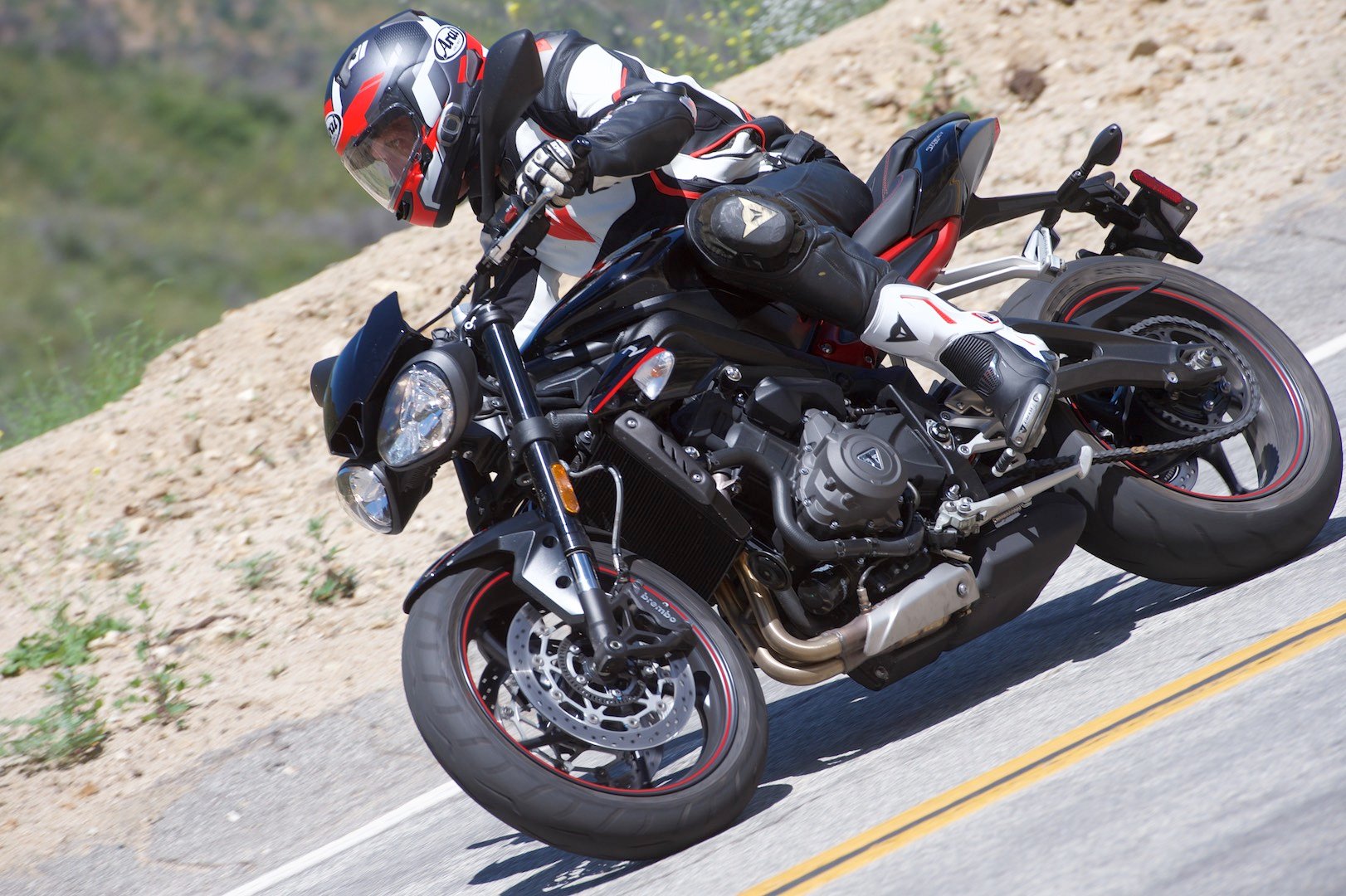 If you’re in a factory preset mode, the Rider mode is grayed out and cannot be selected while moving. Likewise, once in Rider mode, it can’t be switched out of while moving. However, if the engine is switched off the electronics will default back into Street mode. To re-select Rider mode, the bike has to be stationary, although the engine can be running. It’s a pain if you always prefer to ride without the TC, but I can see why Triumph has to do this on safety grounds.

The chassis behaves immaculately, making the 2019 Triumph Street Triple R responsive and user-friendly. The agility and neutrality of the chassis coupled with the three-zone multi-compound Pirelli Diablo Rosso Corsa tires provide incredibly assured handling. I have such confidence in the front that I can confidently jam the bike into slow corners while trail-braking. The Triple R never gets upset when hard on the brakes, and the bike felt light and flickable.

Speaking of the brakes, the Brembo M4.32 monoblock front brake calipers with radial master cylinder combination is as powerful as I need them to be. They have loads of feel, and a smooth initial bite that won’t catch anyone out.

The adjustable Showa suspension is firm and sporting, and aided by a perfectly padded and shaped seat, the Street Triple R is comfortable and rides amazingly well, even on poorly surfaced roads where it still tracks perfectly through a corner without getting upset. In very fast, smooth sweepers the Street Triple never wobbled or weaved, no matter how aggressive I was on the throttle. 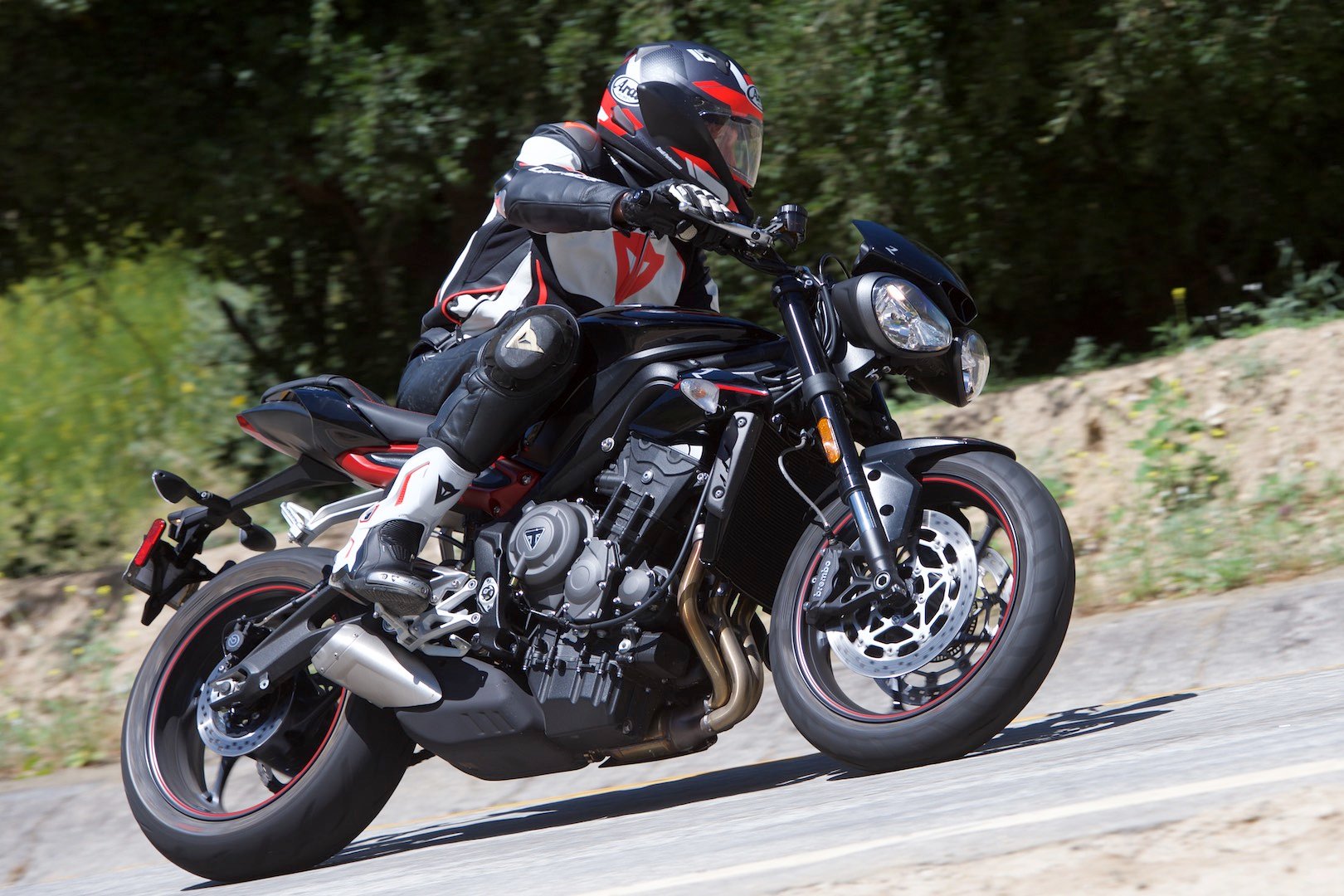 I have had no need to adjust the suspension, which I found that a tad surprising—most stock motorcycle suspension feels a little soft to me, especially at the rear. However, the Street Triple was ideally set up for my 170-pound, six-foot frame. Despite being a relatively small-feeling machine, the riding position is comfortable with a natural fit.

Aided by a 180mm rear tire, the 2019 Triumph Street Triple R is supremely agile. It can flick almost instantly from maximum lean over to full lean on the other side—credit the aggressive 23.9 degrees of rake—yet the handling is also neutral and linear. The Street Triple R doesn’t flop into corners, nor does it understeer or turn reluctantly.

The rear Pirelli Diablo Rosso Corsa tire (with 30 psi cold) has enough edge grip that no matter how aggressive I am on corner exit (on the street) it rarely slips or spins up. The 120mm front tire (with 32 psi cold) is equally reliable. It shows excellent stability, so I always had plenty of confidence when turning in. I have had zero scary moments when aggressively trail-braking, as the grip is flawless.

The TFT instrument display has two levels of contrast with a black background, and a white high-contrast background which, counter-intuitively, I found harder to read and not as attractive to look at. Somewhat irritatingly, the only two possibilities are either High Contrast or Automatic.

For some reason, I can’t select the lovely black background permanently. Using the Automatic mode on a bit of an overcast day, the display kept switching back and forth as lighting conditions subtly changed. It was a little alarming at first when I looked down to see a completely different display. Once I realized why it was happening, I learned to ignore it. I’d like to see that little foible tweaked away in the next iteration. 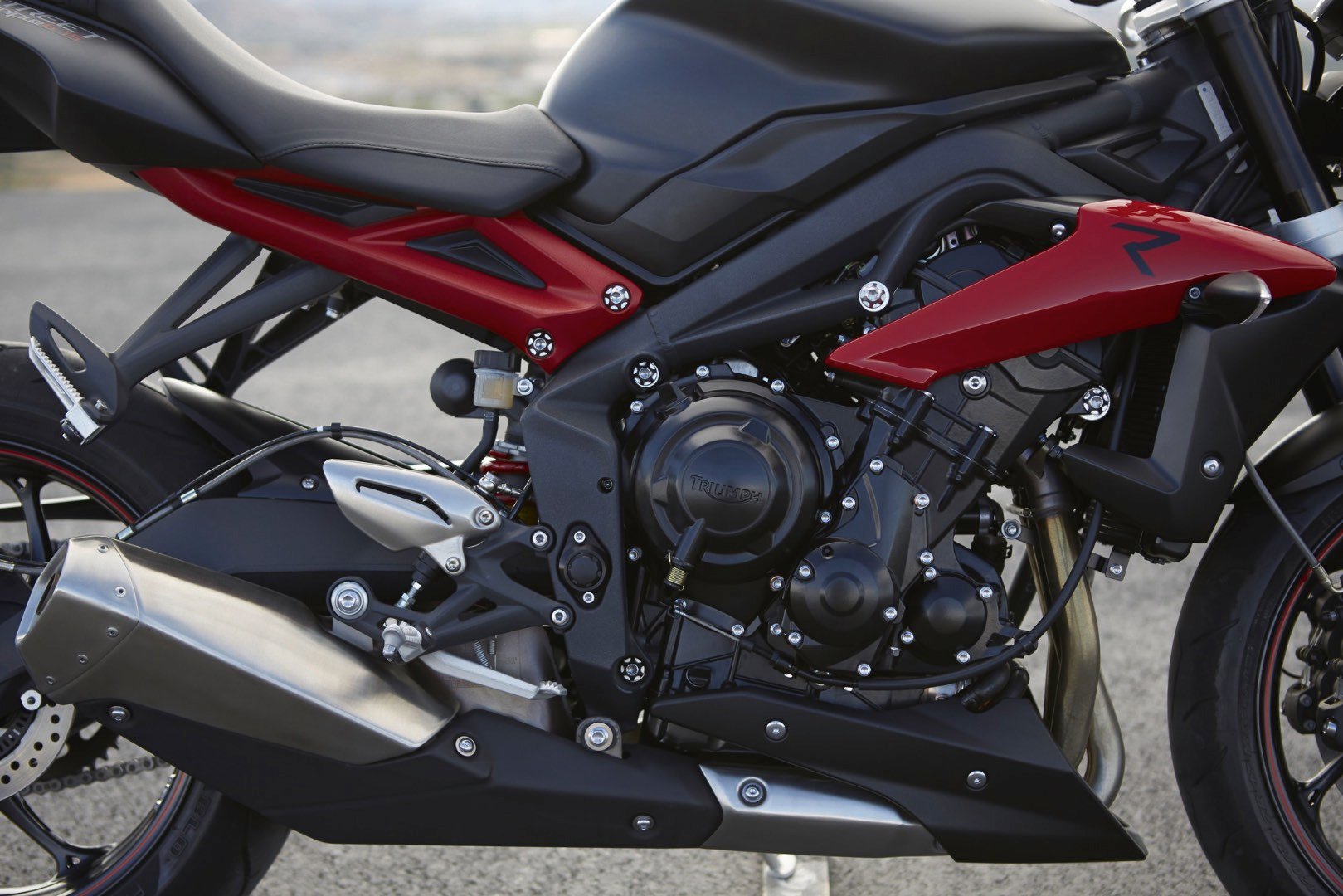 The finish of the 2019 Triumph Street Triple R is exemplary; the motorcycle looks as though it’s a quality build throughout. Small detail touches, such as side-angled tire valves, tapered handlebars, high-quality switchgear, and the instrument pod complement a genuinely comfortable seat and well-placed footpegs. The amazing Brembo radial braking package with braided steel lines completes the quality feeling of the bike.

The R model version of the Street Triple also comes in a Low Ride Height version as well for no extra cost. For shorter-inseamed riders, this is great news.

The 2019 Triumph Street Triple R is a good-looking motorcycle with character and a high-class appearance. It is also a wonderfully enjoyable machine to ride. It has an amazingly user-friendly nature that won’t intimidate beginners, will encourage intermediate riders to up their game, and goad experts into wringing its neck everywhere.

No matter what I throw at it, the Street Triple R just laughs and asks for more. At the end of my first long thrash—over 400 miles—one of my friends remarked that I looked so at one with it. It was if I had owned the motorcycle for years.

Whether you’re urban posing or tearing up the canyons, the 2019 Triumph Street Triple R is an absolute gem. Although I missed riding the 765cc iteration when it was introduced, I am delighted to have discovered it now. I haven’t felt such an affinity for a motorcycle and had this much fun for a while!

Previous articleIn the Memory of Carlin Dunne, a Motorcycle Luminary
Next articleElectric Scooter Ridesharing To Begin