Update price and availability: the Hypermotard 950 retails for $13,295 (MSRP); and the Hypermotard 950 SP for $16,695; both will be available in February 2019.A longtime favorite of the hooligan crowd, as well as those who like high-performance in a dirt-bike style chassis, the Hypermotard is a legendary line of Ducatis.The new 2019 Ducati Hypermotard 950 and 950 SP builds on past successes as a major reworking of the 939. Let’s take a lot at what Ducati has done with to create the 2019 Hypermotard 950.1. Ducati gave the Testastretta 11° motor more power. Peak power is increased by four horses, and there’s an addition peak foot/pound of torque at 7250 rpm. Peak power continues to come at 9000 rpm, while the Testastretta 11° motor puts out 80 percent of its peak torque as early as 3000 rpm, and at least 88 percent of peak torque from 5000 to 9000 rpm. The ample torque spread gives the 2019 Ducati Hypermotard 950 the ability to pull strong from any corner.2. Internal working wrangled the additional output from the liquid-cooled 937cc powerplant. New pistons bump up the compression to 13.3:1 (from 12.6:1), and to match that there is new exhaust valve timing and twin underseat mufflers return. Outside, there’s also a new 53mm throttle body and a new ICU on the Hypermotard 950.3. Traffic is always fun on the Hypermotard 950 if you can lane split, and the new hydraulic clutch will help. The slipper clutch now has a lighter clutch pull.4. Both versions of the 2019 Ducati Hypermotard 950 have a six-speed transmission, with the SP endowed with up/down quickshifting.5. The Testastretta 11° powerplant also went on a diet. Ducati shaved 3.3 pounds off the weight of the motor as part of an overall effort to lighten the Hypermotard. The clutch and alternator covers are lighter, as is the gearshift drum and magnesium cam covers.6. Overall, the Hypermotard 950 is nearly 10 pounds lighter than the 939, and the 950’s new frame contributes to the weight loss. The new frame uses tapered tubing for the trellis to shave off over two pounds, and the rear subframe is a trellis design and remains a bolt-on unit.7. Curb weight will also be a bit lower on the Hypermotard 950, as the fuel tank holds 1.6 quarts less high test. The new tank holds 3.8 gallons. The claimed curb weight of the 950 is 441 pounds. The 950 SP is 4.4 pounds lighter than the standard version with the help of a number of carbon fiber components.8. Rake is tightened up a half-degree on the Hypermotard 950, and there’s a tad less trail. The 25 degrees of rake should give the 2019 Ducati Hypermotard 950 an even more aggressive handling profile. To make it easy to back into corners confidently, the steering sweep is a wide 70 degrees. Lean angle is a generous 47 degrees for those who don’t like backing it in on the SP, while the standard 950 gets 44 degrees of cornering clearance. 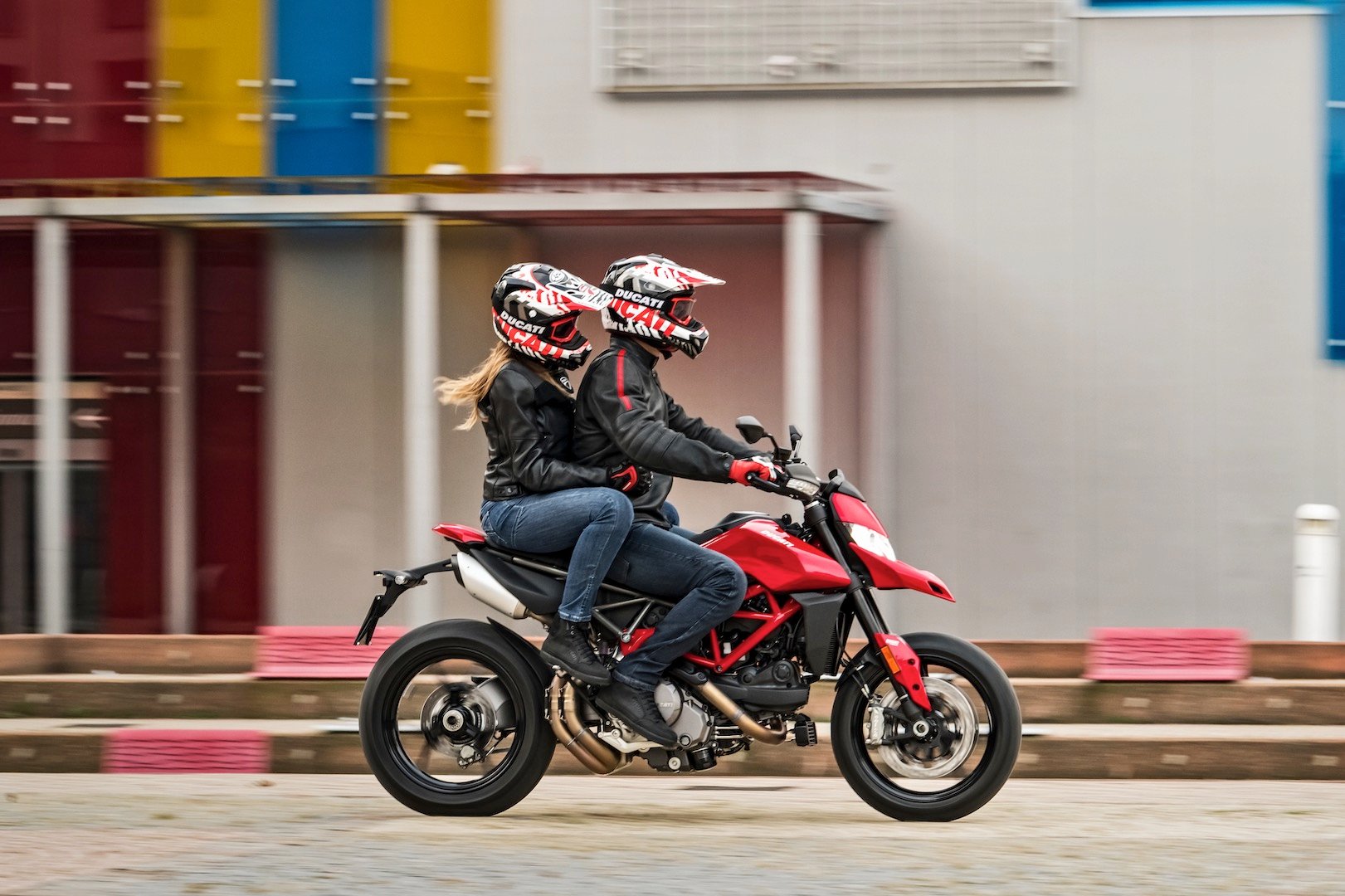 9. The Hypermotard 950 gets a new Marzocchi fork to go with its Sachs shock, while the 950 SP sticks with Öhlins. The inverted 45mm Marzocchi fork is fully adjustable and is over a pound lighter than the 939’s fork. Wheel travel on the standard 950 is 6.7 inches in the front and 5.9 inches in the back. The SP’s Öhlins offer longer travel—7.3 inches front/6.9 inches rear.10. A new narrower seat goes with the new frame to make it easier to touch your boots to the ground at a stop. The seat is also a flatter design to make it easier to move around, with the SP being a tad flatter than the standard Hypermotard 950.11. Like the seat, the handlebar bend has been flattened. The handlebars on the new Hypermotard 950 have seven degrees less sweep back than on the 939.12. Rims and tires have been upgraded on the standard Hypermotard 950, and remind high-end on the SP. You’ll find Pirelli Diablo Rosso III tires on the 950 (compared to IIs) on aluminum Y-spoke wheels, and Diablo Supercorsa SP rubber on the 950 SP mounted on forged Marchesini wheels. The new wheels cut nearly two pounds off each version of the Hypermotard 950.13. Ducati will let you carry a passenger on the Hypermotard 950, but the motorcycle will look cooler solo. The passenger pegs are removable, and the grip-strap can be tucked away.14. Along with Brembo 4.32 monoblock front calipers, the Hypermotard 950 gets six-axis-IMU fed Bosch Cornering ABS Evo. There are three ABS setting. For the hooligan crowd, Level 1 allows sliding of the rear tires, as well as a defeat of the rear wheel lift control. Levels 2 and 3 add more intrusion, with Level 3 designed for non-aggressive riding.15. Three riding modes cater to different attitudes and conditions. The Sport Riding mode is the most aggressive, as you’d expect, though to get Level 1 ABS, you have to do it manually. Touring Mode gives you access to all 114 horses, but with less aggressive throttle response, more traction and wheelie control, and the most ABS intrusion. Urban Riding Mode drops maximum power for 75 horsepower, and turns up all the electronic safety controls to their highest levels; it also functions as a rain mode.16. Lighting is up-to-date with a DRL and LED tail/stop light, along with LED turn indicators integrated into the handguards. 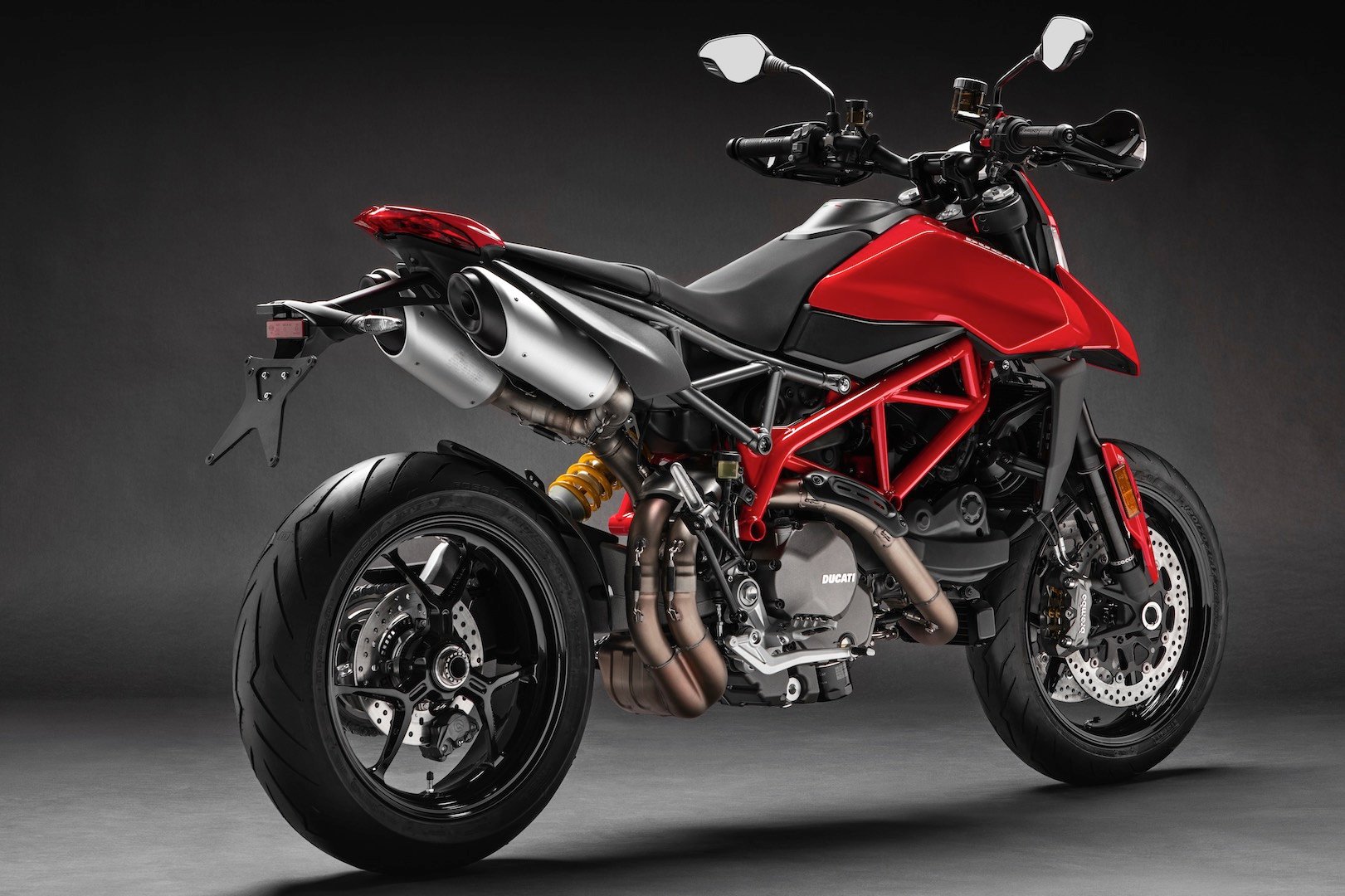