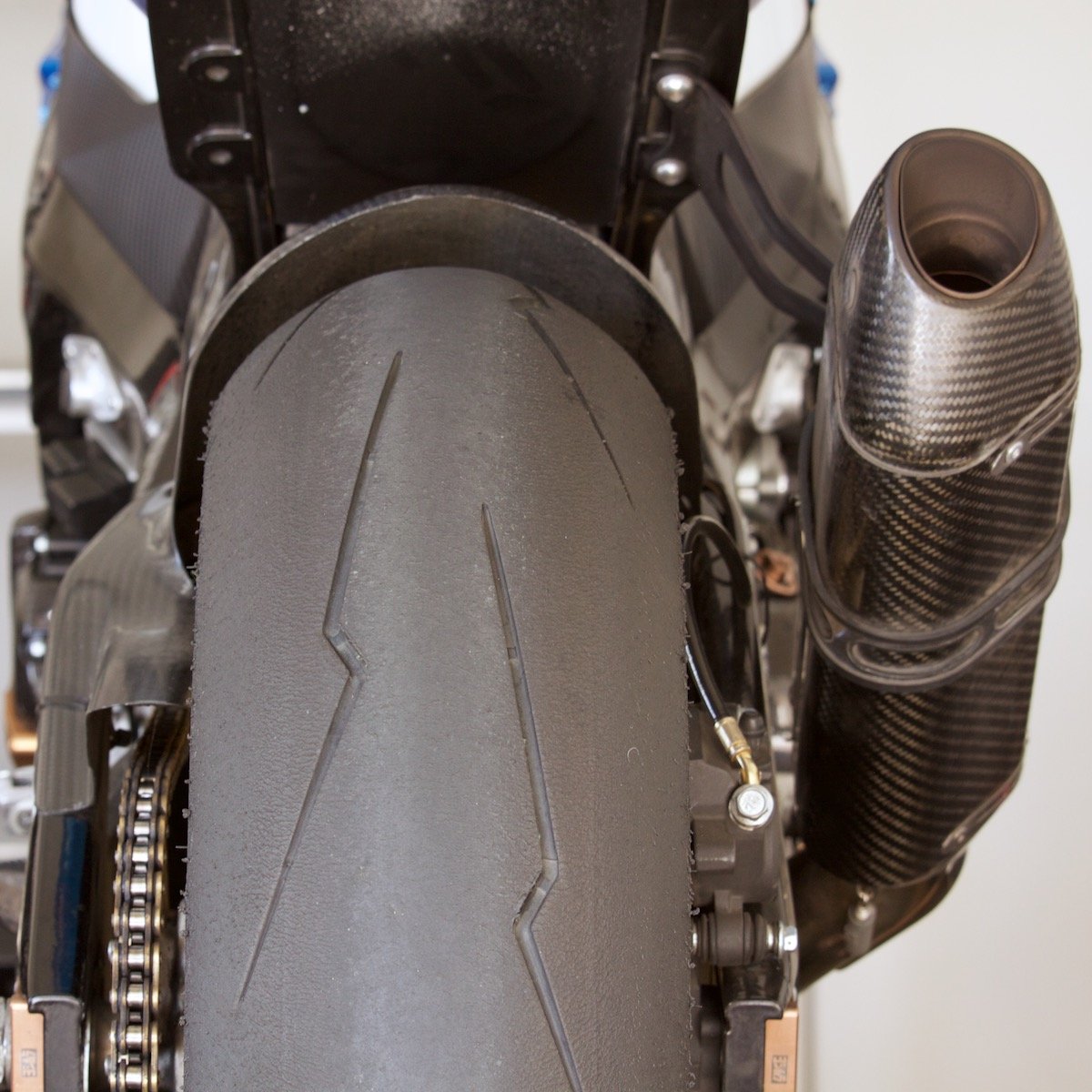 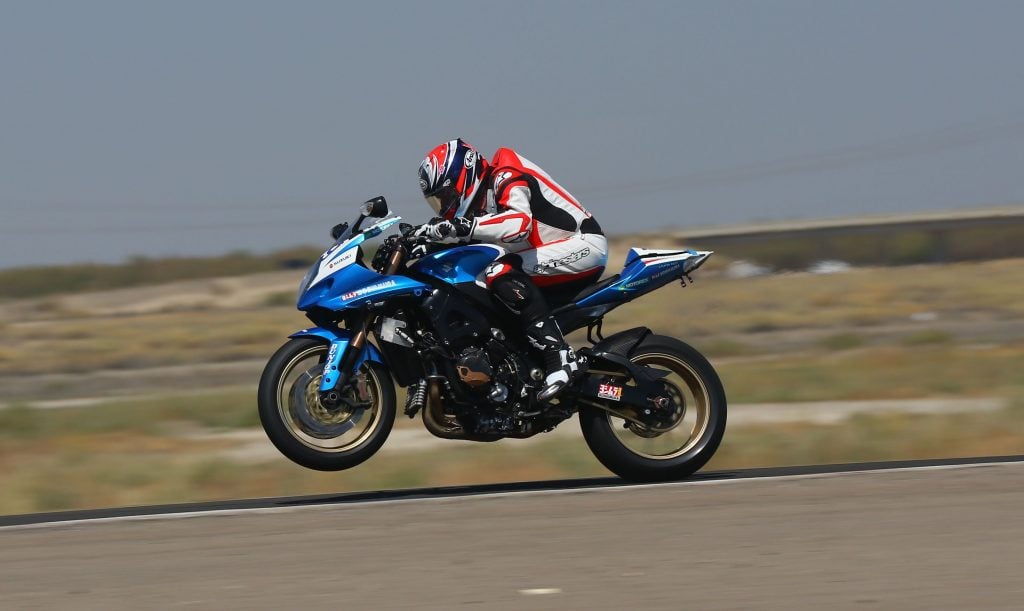 The key to evaluating tires is to eliminate as many variables as possible. So to test the Pirelli Diablo Supercorsa SP tires, I fitted them to my Suzuki GSX-R1000 for our recent Ultimate Motorcycling/JETT Tuning Track Event at Buttonwillow Raceway Park. I know both the bike and track well, so any change in the bike’s behavior, or my speed, would clearly be attributable to the tires.Pirelli has a large and somewhat confusing range of product, with multiple tires suitable for both street and track. The Supercorsa SPs fit squarely into the street tire segment and are a direct competitor to the Dunlop Sportmax Q3 and Metzeler Sportec M7 RR tires, among others.Pirelli Diablo Supercorsa SP tires are standard on the Ducati Panigale R superbike, and feature the same tread design that was used in the FIM Superstock 1000 Cup. Pirelli claims that the Supercorsa SP’s high modulus fiber carcass is stiffer and resists deforming under load, such as when accelerating or braking hard, which upsets the bike’s handling. 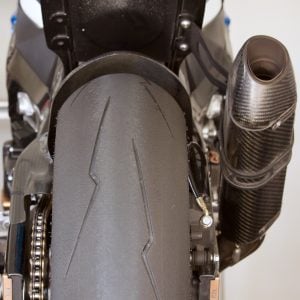 Both Supercorsa SPs—the rear in particular—have minimal tread pattern; Pirelli claims nearly 25 percent more of the tire’s shoulder area is slick, compared to the previous Diablo Supercorsa. The rear Supercorsa is a dual compound tire, with a harder rubber on the center of the tire and a new softer compound on the shoulders that gives additional grip when leaned over. Pirelli’s (patented) Enhanced Patch Technology optimizes the contact area for the best possible grip at maximum lean, yet it also gives good high-speed straight-line stability.Ambient temperature at Buttonwillow (in California’s Central Valley) on the test day was in the low 90s, and humidity was minimal. Although I carried tire warmers, I didn’t bother to use them after the first session, as the track temperature was hitting well into the 100-degree range. Heating the tires quickly wouldn’t be an issue, and I wasn’t overly concerned about heat cycles either, as these are street tires and not nearly as susceptible as race-compound rubber.Although opinions can vary on tire pressures and which depend on individual riding styles and preference, I went with Pirelli’s recommended cold pressures of 30 psi front and 28 psi rear, and never felt the need to change those throughout the day.As anticipated, the tires warmed quickly, but I took it easy for the first lap. In the first couple of corners, the tires squirmed a little and felt a bit greasy, but they weren’t unmanageable. Within a few turns, they were up to temperature and I didn’t give the grip another thought.The initial feeling at moderate speed wasn’t too different from my usual Dunlop Sportmax Q3s, which give excellent feedback and feel, along with neutral and precise handling. It’s no secret that I’m a big fan of the Q3, and that it is my benchmark for performance.The Pirelli Supercorsa SP tires are perhaps a little more aggressive on turn in, but it is difficult to tell at modest speed if there’s much of a difference. I can say for sure the Pirellis turned well and went precisely where I wanted; there is plenty of feel, so I soon forgot about which tires I was riding. 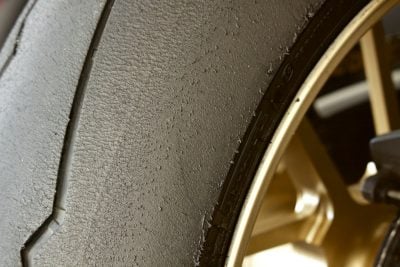 As the day progressed my confidence in the Supercorsa SPs grew and I began lapping at my normal level, where I’m trying hard, but not quite risking everything at ten-tenths.At that point I started to notice that the Pirellis were a little more precise on corner entry, and I was hitting my apexes exactly without any real effort. Furthermore, the Gixxer felt super-stable in mid-corner, and I found myself becoming more aggressive on the throttle on corner exits than usual.The grip from the SPs is absolutely phenomenal. The rubber is very soft, and you can tell that just by digging your fingernail into it. Inspecting the tires after each session showed that the hot track wasn’t helping tire life as the rubber was definitely balling up and the tire was wearing.On the plus side, the Pirellis never showed any real tendency to slide; the big Suzuki felt rock solid at every point on the track. Coming out of Buttonwillow’s very slow Turn 2 and accelerating hard down the short back chute in second gear, I thought the rear maybe felt a little greasy if I was super-aggressive on the throttle and held a tight line. Still, overall, the tire grip was truly inspiring. By the end of the day I had more confidence than I’ve ever had, and I started to get that ‘anything is possible’ feeling.My first clue that the Pirellis worked as well as they do came earlier in the day through the Riverside Turn 12, one that I normally take around 105 mph. I was very surprised when my knee touched down mid-corner, because that never happens.The speed didn’t feel that much different, but when I glanced down I realized, to my amazement, that I was running about 10 mph faster on the Pirellis. That may not sound like much, but it’s a significant difference. Several of my friends have subsequently told me that I looked noticeably faster through that turn, and I wasn’t even trying hard!Ultimately, I found that the Pirelli Supercorsa SPs simply came into their own as the speeds increased, and they definitely moved my speed up a notch. The bike doesn’t turn quicker than on the Q3s, but the Pirellis were a little more precise and made it easier to keep the bike on line on the exit. 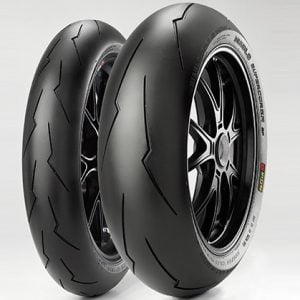 Accelerating hard out of slow corners there wasn’t much difference, but in the very high speed corners my GSX-R1000 stayed planted and predictably on line without drifting even a little wide. It just felt as though the bike was going exactly where I pointed it.I have mentioned in a previous test—same bike, same location—that Metzeler Sportec M7 RR tires suffered more deformation than the Q3s under very hard braking. Indeed, I have loads of confidence in the Dunlops on the brakes.However, the feel I was getting from the Pirelli Supercorsa SPs gave that edge in confidence to brake later than usual. I could also trail brake a little, which is a risk I typically avoid. I can’t say the grip was any better on the brakes than the Metzelers or Dunlops, but the stability of the Pirellis gave me the confidence to push my personal envelope beyond my normal comfort zone.I don’t usually bother with lap times at track days. However, after this experience, I was intrigued enough to compare my speeds with other riders who were taking lap times, and then try to extrapolate my times with a bit of educated guesswork. Don’t hold me to it, but I think I knocked a minimum of a couple of seconds off my average lap times—perhaps more. The biggest standout for me is how easily the Supercorsa SPs made it happen.The Pirelli Supercorsa SPs are amazing tires, and I can’t speak highly enough of them. That they are street tires is almost jaw dropping; I simply cannot fathom how tires designed for the street can be made to perform with such grip and precision at the track.However, there is a literal price to pay. As we all know, there’s no such thing as a free lunch, and the Pirellis are significantly more expensive than the Dunlops and Metzelers. Checking Motosport.com (in September 2016), we see that a set of Pirelli Supercorsa SPs run $435, while the Dunlop Q3s are $287 a set, and the Metzeler M7 RRs are $272 for a set.The Pirelli’s rubber is also (naturally) very soft and, although I think I’ll get one more track day out of them, that’s likely to be it. Dunlop Q3s typically give me three track days and some street mileage as well. The Metzelers gave me around the same as the Dunlops, so both brands’ tires last around half as long again as the Pirellis. If you pay a shop to change your tires, then that’s a financial factor to take into consideration, too.There are a many variables, so my math cannot be that precise, but the bottom line is that, in general terms, you will likely find that riding Dunlops or the Metzelers will have you spending about half the amount of money and changing your tires a third as often as you will with the Pirelli Supercorsa SPs. As the SPs’ track superiority is negligible at street speeds and lean angle, the Q3 and M7 RR tires are a more practical choice, with the Q3s getting the nod for those who do occasional track days mixed in with plenty of street riding.This makes the Pirelli Diablo Supercorsa SPs the take-no-prisoners, price-is-no-object choice if you want speed at any cost—the tires are an exceptional product that are a blast to use.