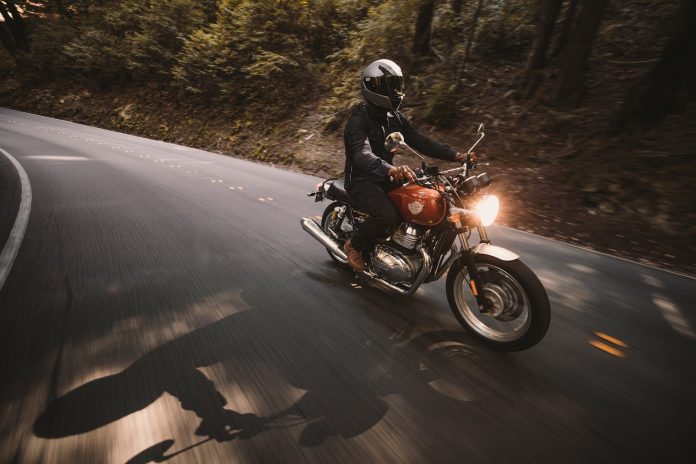 The 2019 Royal Enfield INT 650 is one of two new twin-powered models from Royal Enfield for the new model year, and it marks a major turning point for the brand.Over the last 50 years, Royal Enfield’s presence in the US market has been rather light, with changing importers, a limited dealer network, and not much cultural impact. The once-British and now-Indian owned company is hoping to change that with the first multi-cylinder motorcycle from Royal Enfield since 1970.1. A traditional standard motorcycle has one of the toughest jobs in the motorcycling community. Not subject to narrow definitions that other categories can use as shielding against criticisms, a standard bike needs to be all things to all people—commute, entertain, inspire, be affordable, approachable, and satisfying. The 2019 Royal Enfield INT 650 endeavors to achieve those goals. 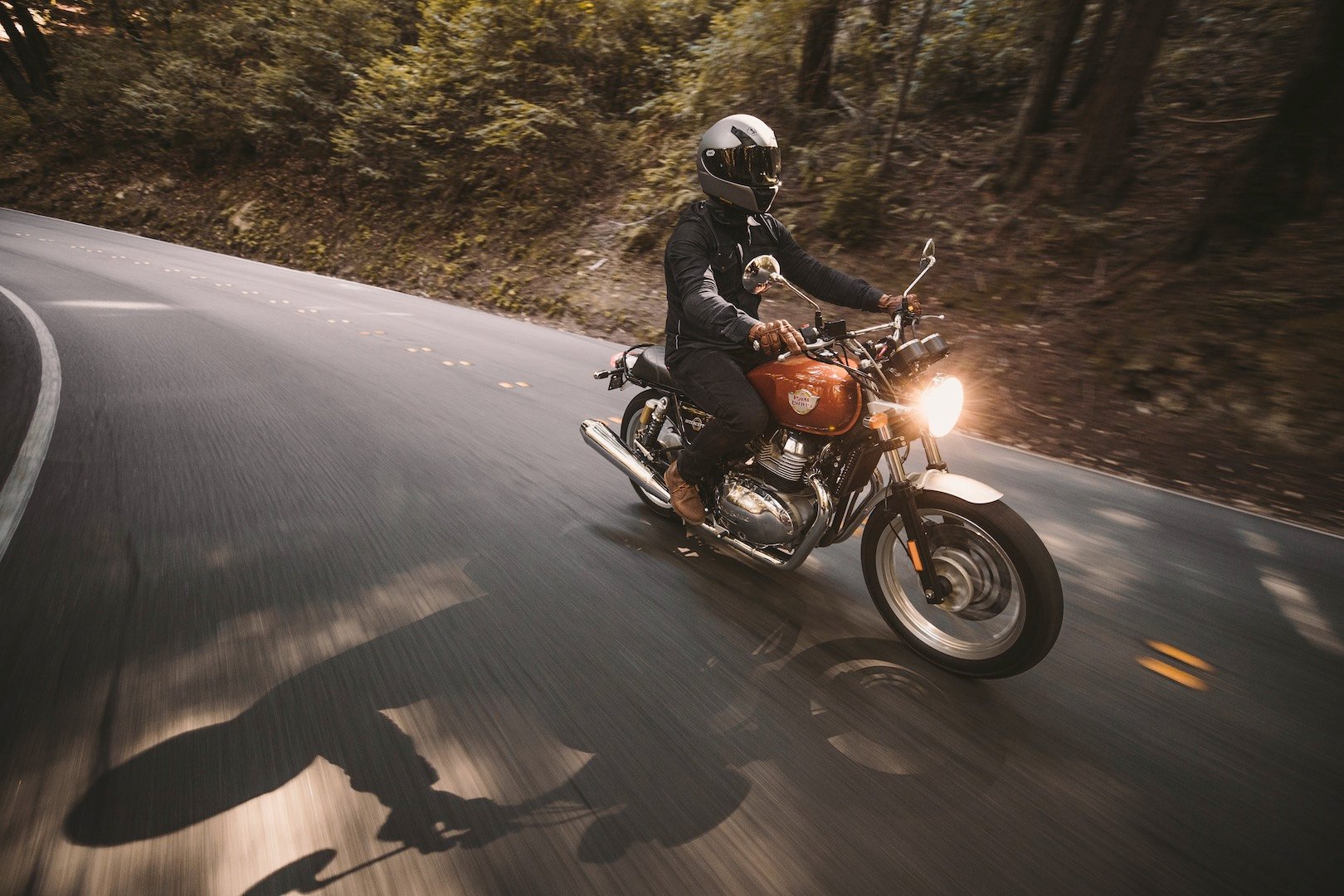 2. The 2019 Royal Enfield INT 650’s 648cc air-/oil-cooled parallel twin is what motorcycling is all about. Royal Enfield’s goal with its new engine platform was to create a powerplant that could satiate riders at any place on the spectrum. The extremely tractable motor—with 47 horsepower at 7250 rpm and 38 ft/lbs of torque just 2000 rpm sooner—does just that.3. The counterbalanced 270-degree crank gives this middleweight twin serious charm. The twin gives new riders an unintimidating but soulful engine to learn on, while experienced riders will revel in extracting every ounce of performance with glee. When you whack the throttle and indulge in its exhaust note, a positive side effect is that the motor incredibly smooth at virtually any speed. Trundle along at 65 mph or so, and you won’t be asking much of the INT or when your whip-hand becomes greedy in the canyons. Royal Enfield has nailed it with its peppy twin.4. A six-speed gearbox and long gear ratios keep the work to a minimum. The relatively high gearing allows you make use of your torque and chug your way out of When enjoying the cold reality that we call the urban sprawl, you don’t have to be too particular about gear choice. It is a trait that riders, new or old, will appreciate. 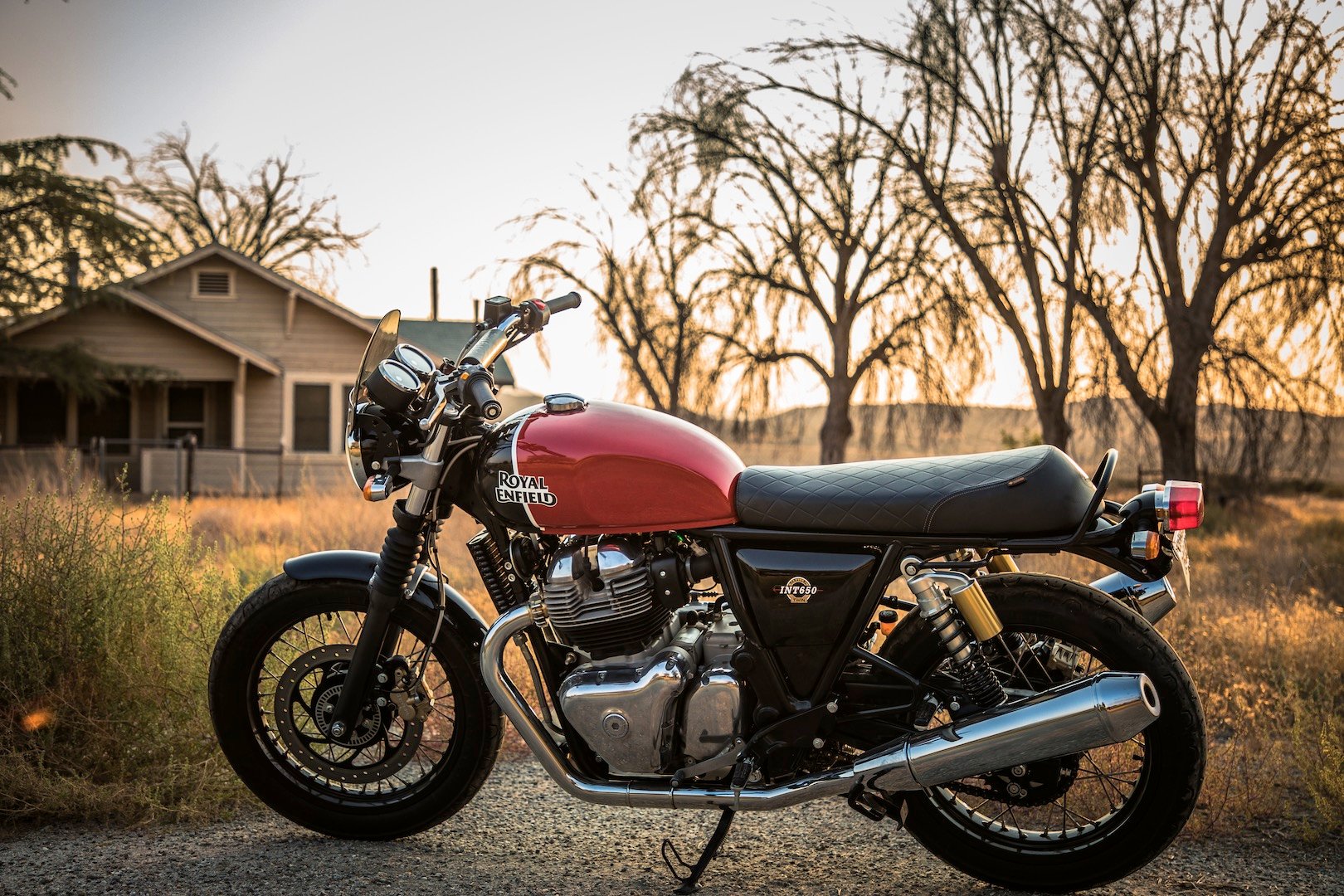 5. INT 650 Riders will stay comfortable with the classic, neutral riding position. Standard machines have some of the most forgiving riding positions around, as they are focused on providing good mobility, comfort, and The INT is no exception with a 31.6-inch seat height and a narrow chassis that’ll allow just about anyone to get their boots on the ground. The stylish handlebars keep your arms at a comfortable angle and provide a good amount of leverage when riding, while also maintaining a completely neutral upright riding position. Better yet, the rear-set footpegs didn’t grind when we got into the twisty stuff thanks to the ample cornering clearance.6. The 2019 Royal Enfield INT 650 is about as effortless as it gets when it comes to handling. Arguably, this motorcycle’s biggest strength is how user-friendly it is when cornering. It’s petite wheelbase of 55 inches and 24-degree rake give the INT 650 a nimble yet controlled personality when tipping into the corners, regardless of the situation. It’s stiff steel double cradle chassis keeps everything in line and the wheels planted, providing loads of confidence for riders across the board. Better yet, if you botch a line and need to correct, the INT 650 is forgiving enough to accommodate you.7. Curiously, the INT 650 weighs in at a substantial 466 pounds. It weighs 56 pounds more than a Kawasaki Z650, which made me do a double take. Fortunately, the Royal Enfield INT 650 carries its weight well, thanks to a low center of gravity. Before checking the specs, I would have guessed it weighed in the high 300s. 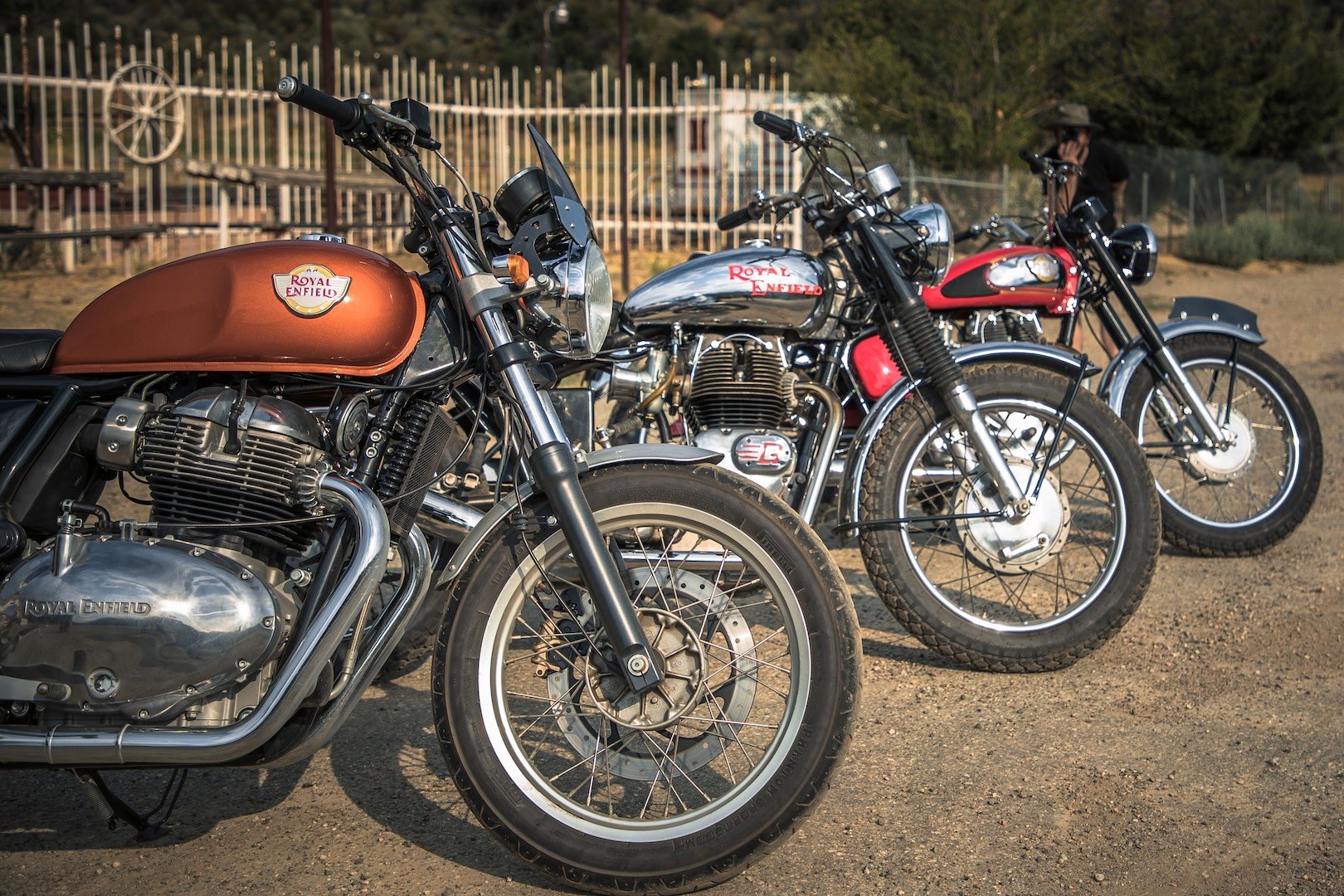 8. No frills suspension can get the job done. A non-adjustable 41mm fork and twin Gabrielle shocks with spring-preload adjustment is par for the course when talking about traditionally styled middleweights. We know this is where manufacturers can pinch a few pennies. However, despite being budget hardware, it works well enough in most situations.9. Around town or at lower speeds, the Royal Enfield INT 650 suspension does a good job of protecting the rider from the worst of rough streets. The rear suspension is the weaker point with just 3.5 inches of travel, and a decent hit will be felt in the rear a bit.10. At higher speeds and when the tarmac gets choppy, the fork can pogo. That is, most likely due to a bit too much rebound, but that didn’t stop us from hauling the mail on the 650. The chassis still stays in line in less than ideal conditions, and with a choice bit of road in front of you, you’re in for a good time.11. Single rotor brake setups will prevent you from getting into trouble. A single 320mm rotor up front works in conjunction with a two-piston ByBre caliper (made in India by Brembo) while a single-piston caliper clamps down on a 240mm rotor in the rear. Stopping power is adequate for the speeds you’re hitting, though I would still like a little more in the front. Dabbing a bit of rear while piling on the front will get you stopped in a hurry ABS is standard.12. Feel at the lever is better than expected, most likely thanks to the use of a steel-braided line. If Royal Enfield is putting a braided line on a middleweight motorcycle price under $6k, so can the other manufacturers.13. The 2019 Royal Enfield INT 650’s Pirelli Phantom Sportscomp tires fit the vintage motif with much more than vintage. Royal Enfield worked directly with Pirelli to get the compound and characteristics of the Phantom Sportscomp tires right for the INT 650. The 100/90 front and 130/70 rear are laced up to choice looking wire-spoke 18-inch wheels give ample traction for the application. 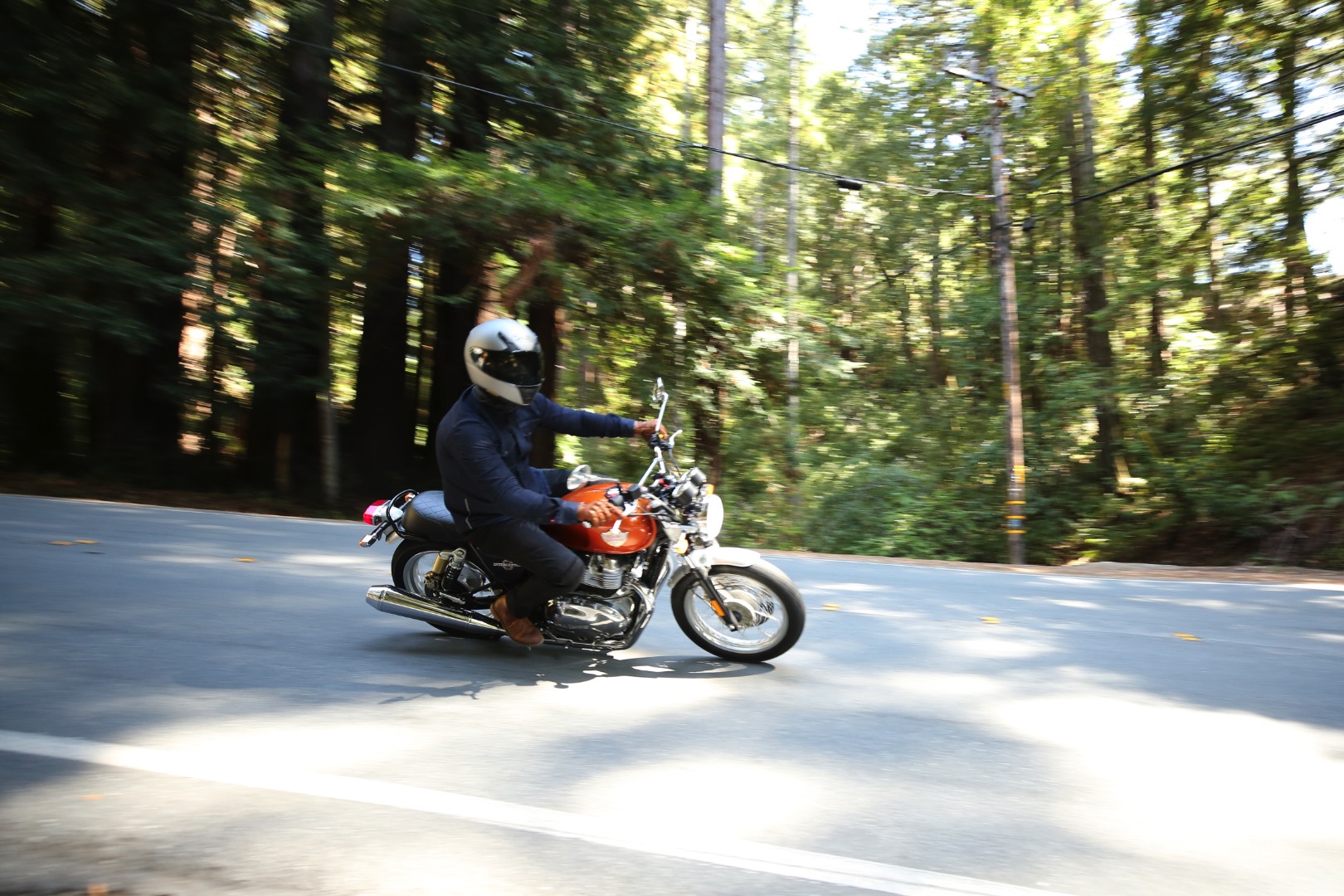 14. Though this model is known as the INT 650 in the United States, it’s an Interceptor 650 in the global market, and even has it emblazoned on the side covers. The INT 650 sports the motif and Interceptor name from a performance-oriented Royal Enfield that tooled around the US in the 1960s.15. The major components of the 2019 Royal Enfield INT 650 show a great deal of care and highlight how their manufacturing has improved. Between the high-quality paint and chrome finishes on the teardrop fuel tank, frame, and fenders, it’s evident that the manufacturing processes are changing at Royal Enfield. Analog and digital clocks have a fuel gauge and fit the motif perfectly, while also being functional, though a gear indicator would be a welcome addition. Lovely detailed badging elevates the whole package as well. The only sore spots are the finishes on the upper triple tree.16. Like all the Royal Enfield bikes, the 2019 INT 650 was designed in the UK and is manufactured in India. All modern RE bikes are designed at their Leicestershire testing facility, while final builds happen at their Chennai factories.17. For the past several years, RE has focused on modernizing and streamlining its manufacturing process and facilities, achieving and exceeding ISO 9001 standards. Royal Enfield’s quality control processes have improved dramatically, and hopefully, it translates to more reliable products from here on out. For example, previously, frames and other critical components were outsourced to a variety of builders, which can create quality discrepancies between the same parts. Royal Enfield says it has refined its material procurement, making sure that everything meets its standards, and narrowing parts to individual sources. From our vantage point, some of that is evident in the build quality of the bikes. 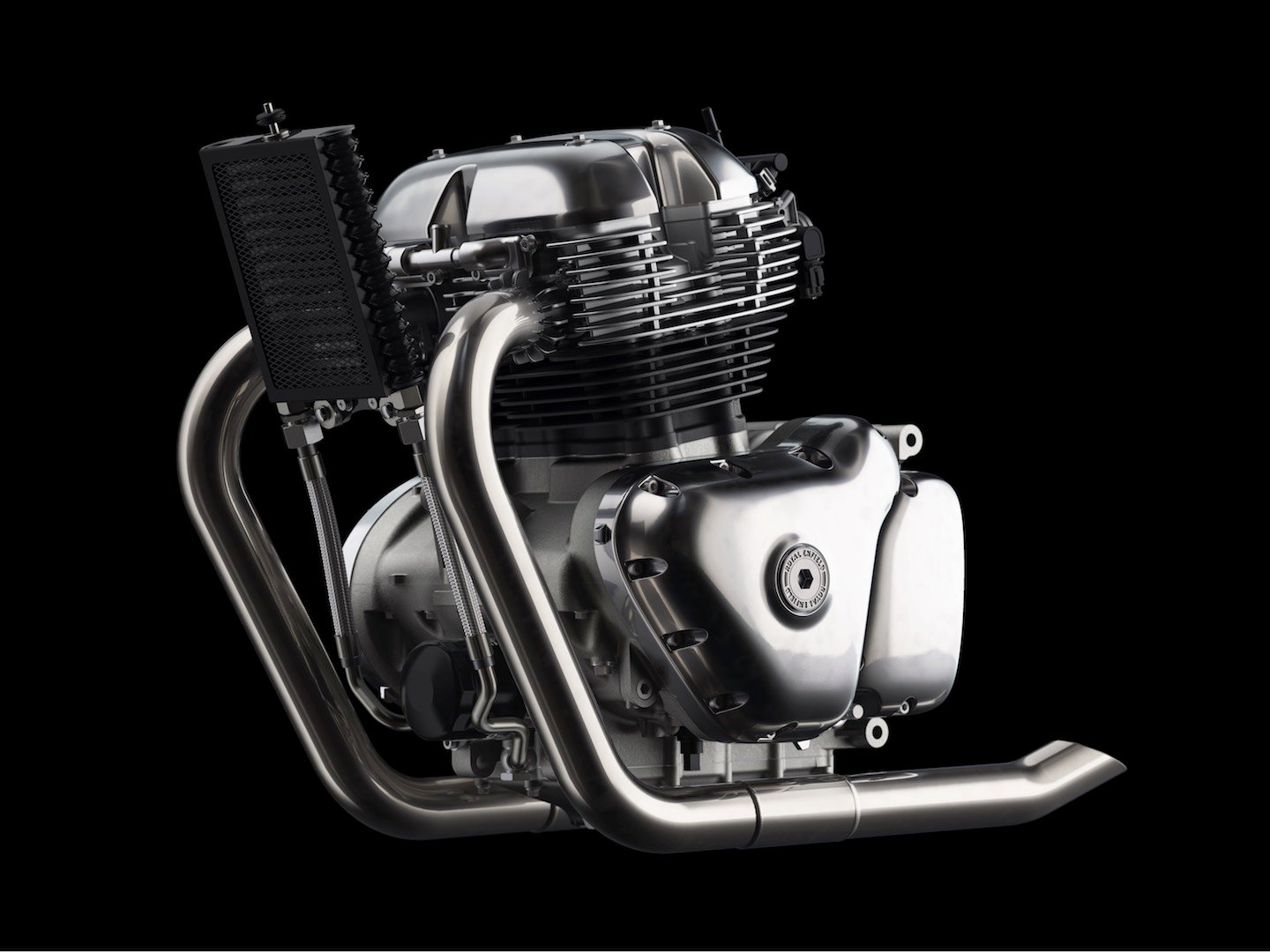 18. The 2019 Royal Enfield INT 650 begins at $5799 and features a three-year warranty with one year of roadside assistance. In the middleweight class, where price is everything, RE has successfully beaten everyone to the punch—it is even $200 less expensive than the Chinese-made Benelli Tornado TNT 600. 19. The exhaust note alone will have people fighting the urge to scrawl their name on the dotted line, while the twin-cylinder engine’s friendly characteristics will help seal the deal. Its congenial handling and upright riding position make the 2019 Royal Enfield INT 650 an extremely versatile platform, excelling at all the things a happy little standard bike needs to do. Of course, finish options will set you back a little extra. At its core, with great retro looks, nice engine, and a respectable chassis, the INT 650 should be getting some attention, and, with the aggressive pricing structure, Royal Enfield is about as serious as you can get about shifting the tide.Photography courtesy of Royal EnfieldRIDING STYLE