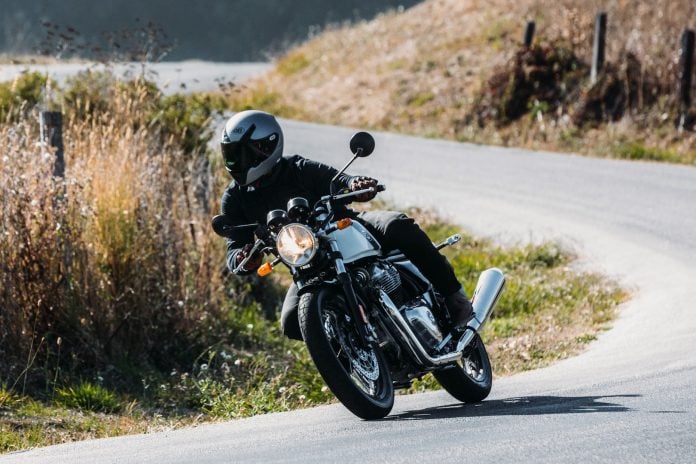 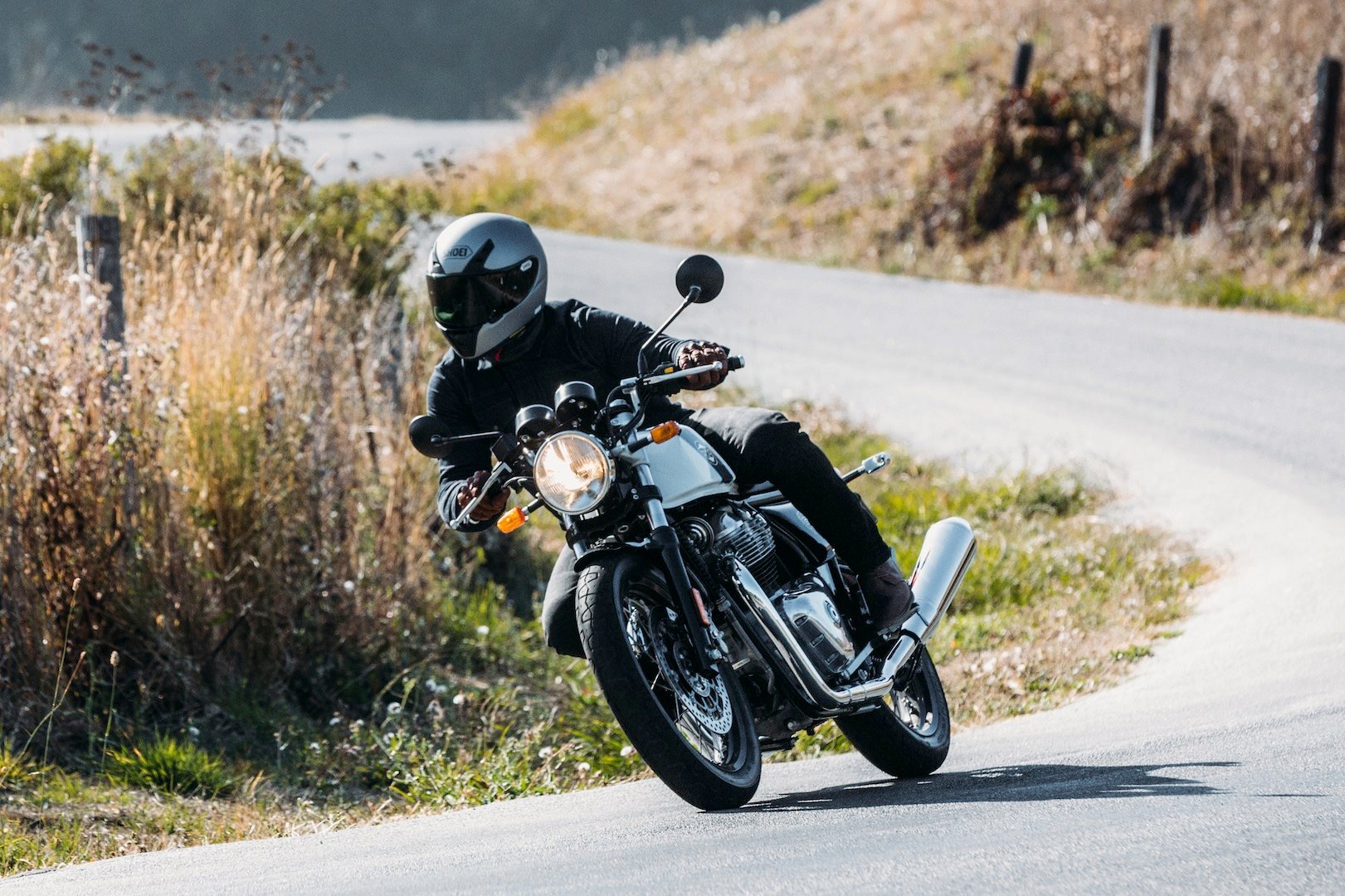 The story wasn’t over, but was dormant for decades. In 2014, the Continental GT name was revived and the new version featured a 535cc powerplant with EFI. When we tested the 2014 Royal Enfield Continental GT, we came away with smiles on our faces.The GT line gets a serious boost this year with the devilishly handsome 2019 Royal Enfield Continental GT 650, which shares its all-new parallel twin motor with the upright standard INT 650. Complete with all of our favorite café fixings, Royal Enfield has whipped up a racy little twin-cyldinder motorcycle that does more than simply draw attention—it does mighty fine on the roads as well.We spent some time aboard the 2019 Royal Enfield Continental GT 650 in the Monterey Bay area, exploring some of the finest sweepers and amazing scenery that California has to offer. Until we get the new GT 650 in the stable for a long-term test, we’ll hit you with the Fast Facts.1. An all-new 648cc air/oil-cooled parallel twin is at the heart of the 2019 Royal Enfield GT 650. There is something uniquely satisfying about an engine that provides a perfect amount of street-able performance—more than enough to have fun, but nothing that will go over your head. Boasting 47 horsepower at 7250 rpm and 42 ft/lbs of torque at 5250 rpm, the GT’s new twin-cyclinder powerplant spins up nicely, letting you rip through the canyons with the best of them.2. When winding it out, the counterbalanced 270-degree crank never becomes buzzy or cantankerous. With enough stick to keep the fast boys happy, the short-stroke twin is simply a great middleweight platform, regardless of the rider’s skill level. The final touch is a truly awesome tune pouring out of the dual exhaust. 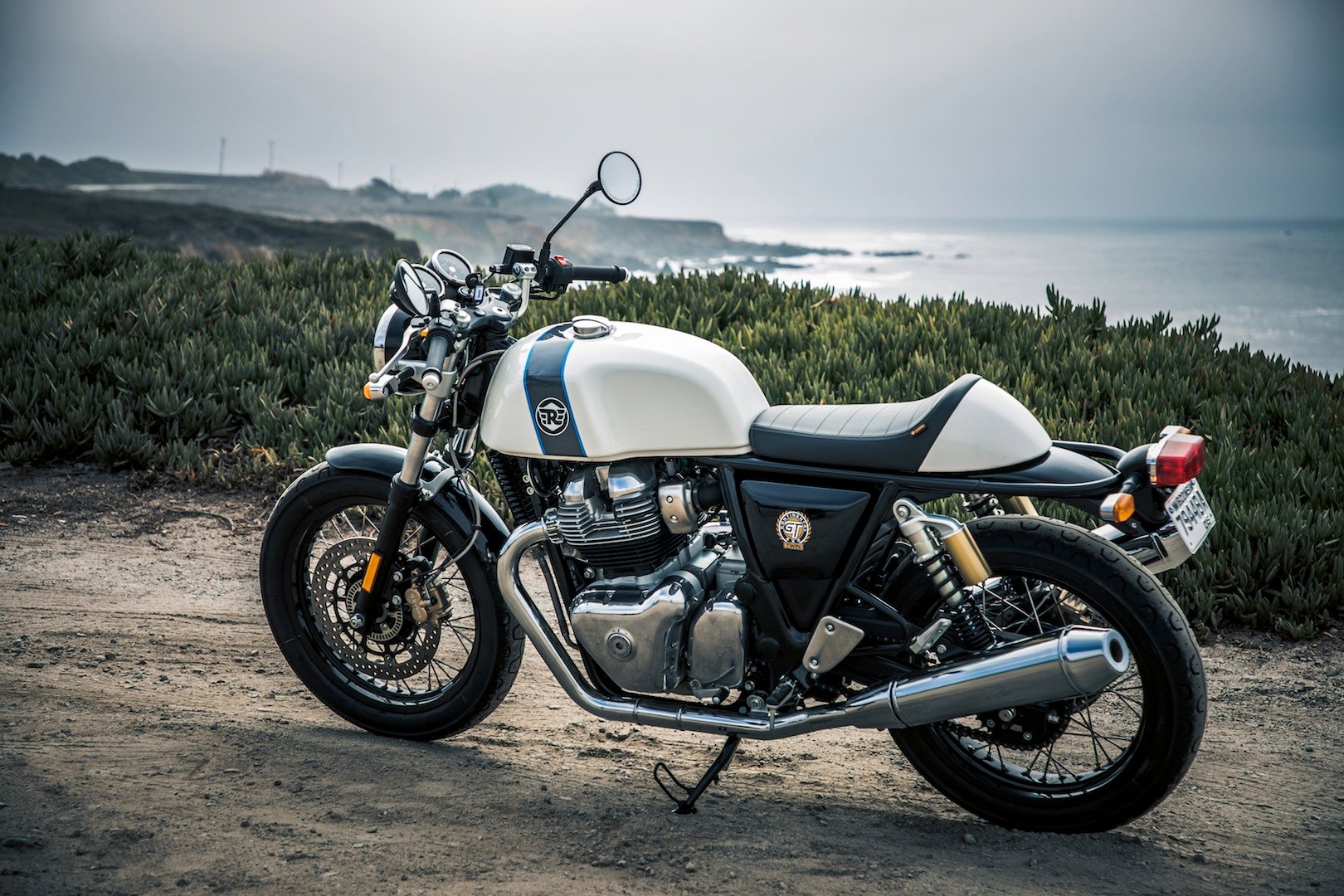 3. Six gears and well-spaced ratios let you focus on the ride. Longer gear ratios allow the rider to wind the engine out and use everything it has when out exploring some mountain roads. This lets you dive into apexes without having to worry about gear choice. The same can be said of riding in traffic, which certain can take its toll on larger motorcycles. Luckily, the cable clutch has a light pull and it’s amicable, no matter the pace.4. Café racer riding positions can come at the price of comfort—that’s not the case on the Royal Enfield GT 650. We’ve seen it all too many times—a stunning modern bike with vintage racer looks that has a riding position not too far off from that of an ancient torture device. That is not the case with the GT 650. Its clip-on handlebars encourage a sporty riding position, though nothing excessive. It also has a sculpted fuel tank and a classic café racer seat, both of which are unique to the Continental GT 650. Also, the rearsets have been moved back a bit, in comparison to the INT 650, giving it a more aggressive posture.5. When the pace picks up, you’ll feel like a real Ton-Up Boy with your knees tucked in blasting along the road. Fortunately, it’s still, it’s a comfortable machine, and you’re able to distribute your weight through your legs well without stressing your wrists.6. Sporty handling is at the forefront of the Continental GT 650. It doesn’t just look the part – it’s more than capable of hanging with the heavyweights in the canyons, but it’s user-friendly, too. The short 55.1-inch wheelbase and 24-degree rake give the GT 650 a compliant, but nimble nature. A touch of input through the inside peg and the GT begins to tip in gracefully. 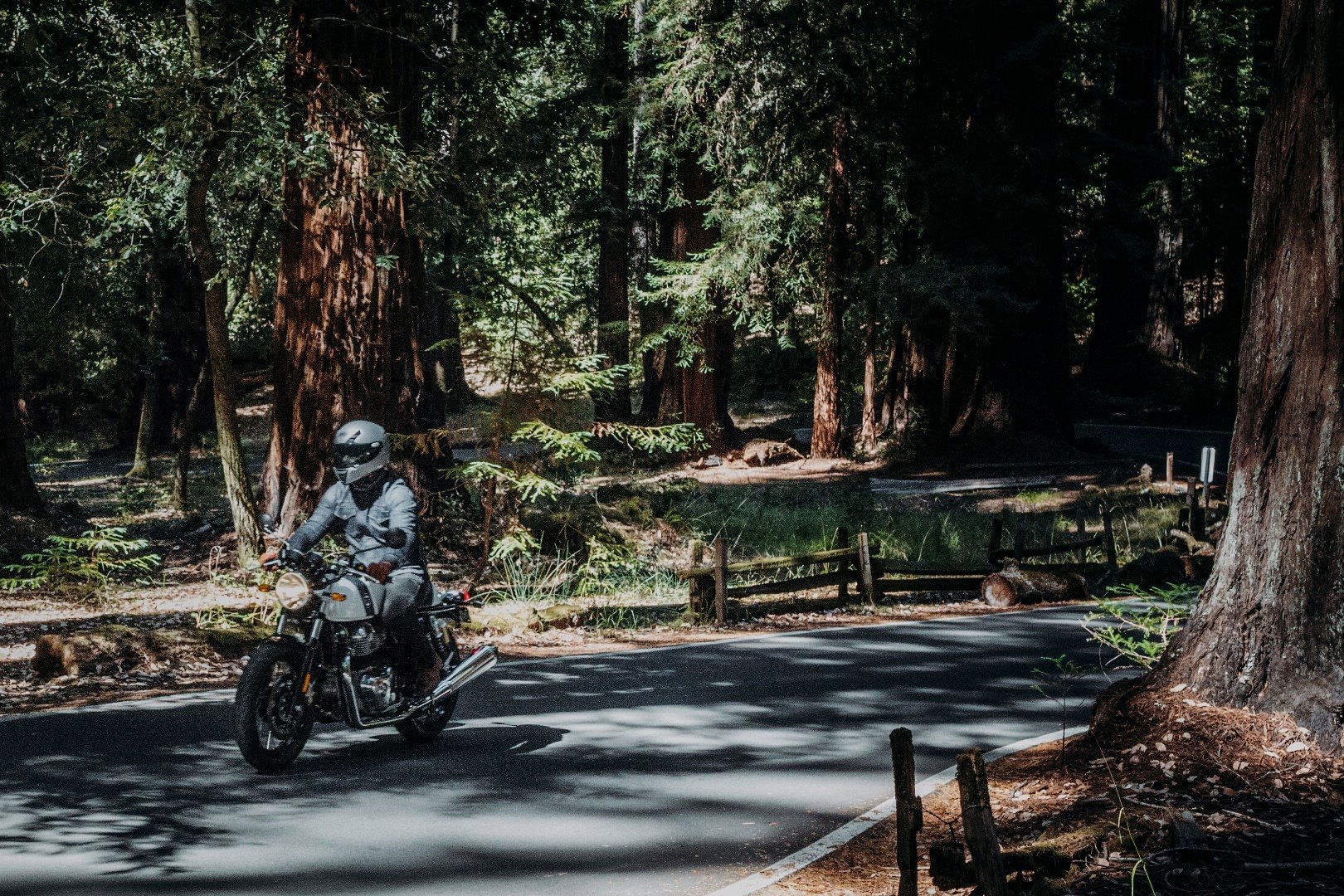 7. The steel double cradle frame is claimed to be 20 percent stiffer than the single-cylinder GT 650, and I certainly felt it. The chassis is solid when on the edge of the tire, which all riders will lean on and become even more confidently while aboard the GT 650. At a claimed 455 pounds gassed up, the Continental GT 650 is not light. I was shocked to see this on the spec sheet because the weight is nowhere to be felt when on the road.8. The 2019 Royal Enfield Continental GT 650’s basic suspension is adequate. Get some relatively smooth tarmac at your disposal, and you will be able to whip the GT 650 through the canyons without a single care in the world. The non-adjustable fork does a decent job of maintaining composure under normal braking, and overall, most of the rough stuff is seen but not felt. However, due to too little rebound damping in the fork and a slightly stiffer rear, there can be a bit of pogoing over choppy asphalt.9. Single rotors front and rear keep you out of the ditch. The 320mm front rotor and two-piston ByBre caliper have enough stopping power to match the GT 650’s performance. In the rear, a 240mm caliper with a single-piston caliper offers a helping hand. Changing to higher performance brake pads should give the brakes some more bite, of course. Feel the level is better than expected, due to the steel braided brake line that’s been bolted on. When a bike this affordable comes with a steel braided brake line standard, it’s time for the rest of the industry to step up. ABS is standard.10. Pirelli Phantom Sportscomp tires and 18-inch wire-spoke wheels round out the café charm. Many manufacturers work with tire producers to make an OE fitment tire designed specifically for their models, and RE felt it was time to jump in with the big boys for the 2019 Continental GT 650. The Phantom Sportscomp has a good amount of grip and provides appropriate visual vintage flair. The 100/90 and 130/70 combo is narrow, sure, but I felt more than comfortable at pace. 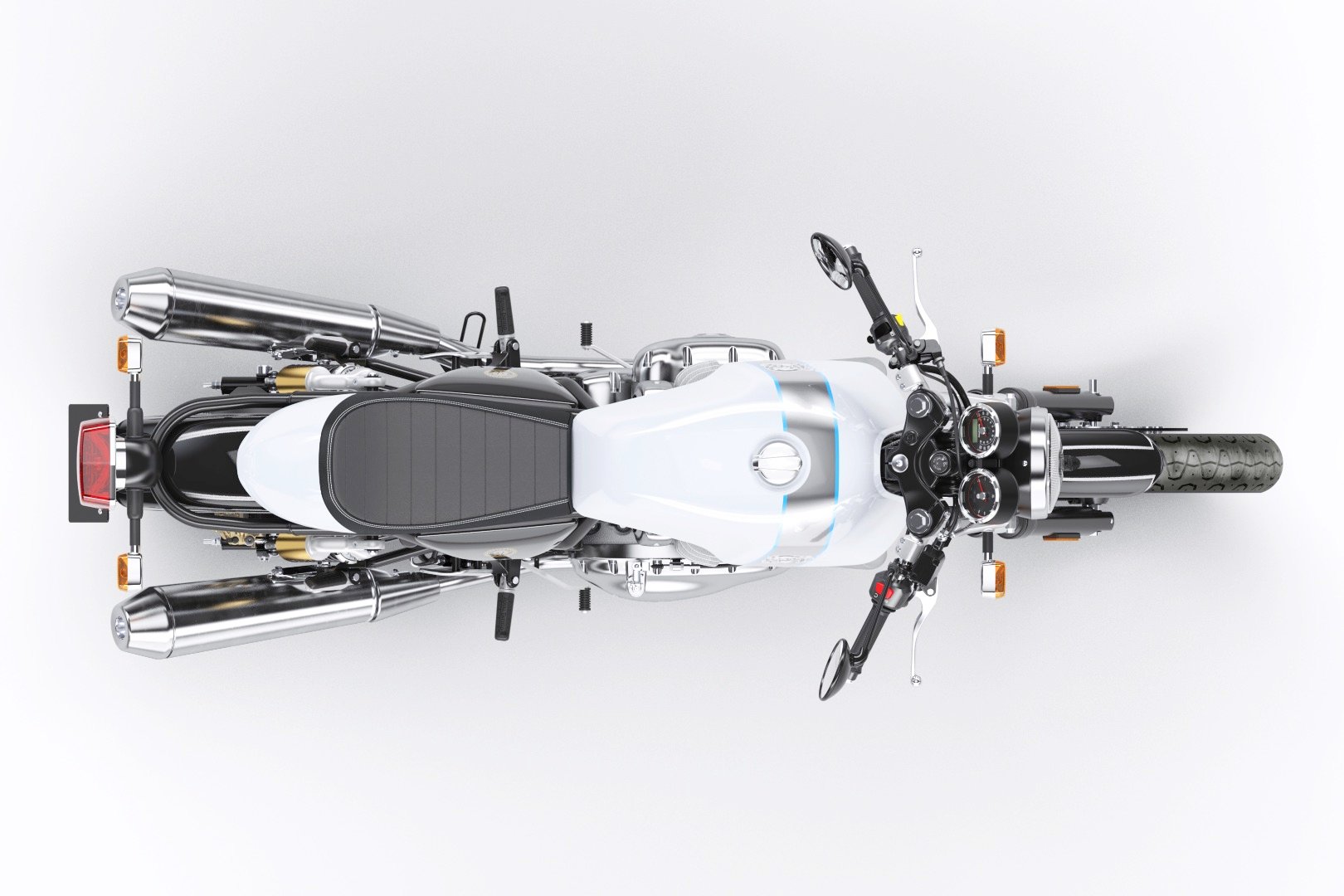 11. Royal Enfield claims the 2019 Royal Enfield Continental GT 650 is a step up in build quality. A main change for Royal Enfield is standardizing suppliers for consistent results. As a reminder, Royal Enfield motorcycles are designed and tested in the English Midlands—not far from Triumph and Norton. The motorcycles are built in India on the coast of the Bay of Bengal in a robotics-enhanced production facility that boasts ISO 9001 standards. The company’s ultimate goal is to increase the reliability of its product, and we’ll have to put that to the test with a long-term review.12. Royal Enfield’s sales numbers are booming, though not yet in the United States. In 2007, Royal Enfield sold 32,000 motorcycles in India. By 2017, the number grew to nearly 820,000 domestically. Currently, Royal Enfields are available in 50 countries.13. The Continental GT 650 includes a one year of roadside assistance. That, along with a three-year manufacturer’s warrant, will help allay reliability concerns.14. The 2019 Royal Enfield Continental GT 650 is a bargain with an MSRP of $5999. Paint options will set you back a few hundred dollars, depending on the option, but less that $6k for a fun middleweight bike is a shot across the bow of the competition. Royal Enfield has created a fun, engaging, and sporty bike that should be able to satisfy a whole lot of riders with its approachability, not to mention panache to spare.Photography courtesy of Royal EnfieldRiding Style