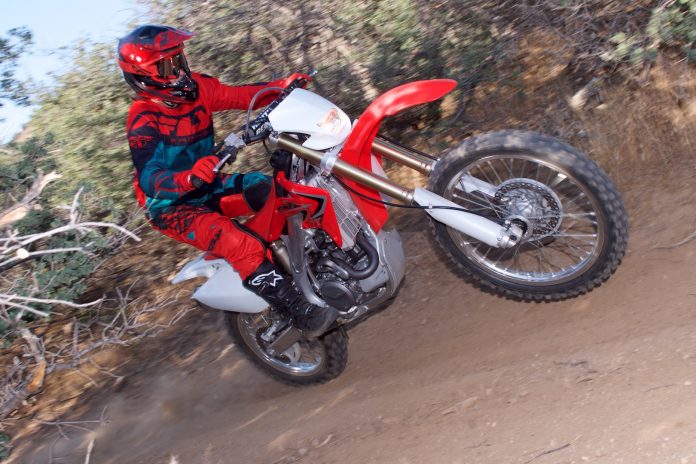 Although it is virtually unchanged since 2009, the 2017 Honda CRF450X has an enduring legacy in Baja and remains a credible off-road motorcycle.While it has fallen far behind the new Honda CRF450RX when it comes to racing, the CRF450X is a fantastic trail bike for those who want a reliable, manageable mount.In the last couple of years, there has been a realignment in the off-road world. The Europeans—Beta, Husqvarna, and KTM—have turned their EPA-friendly Green Sticker motorcycles into dual sport bikes (a move we applaud), and their off-road bikes have become fully competitive machines. 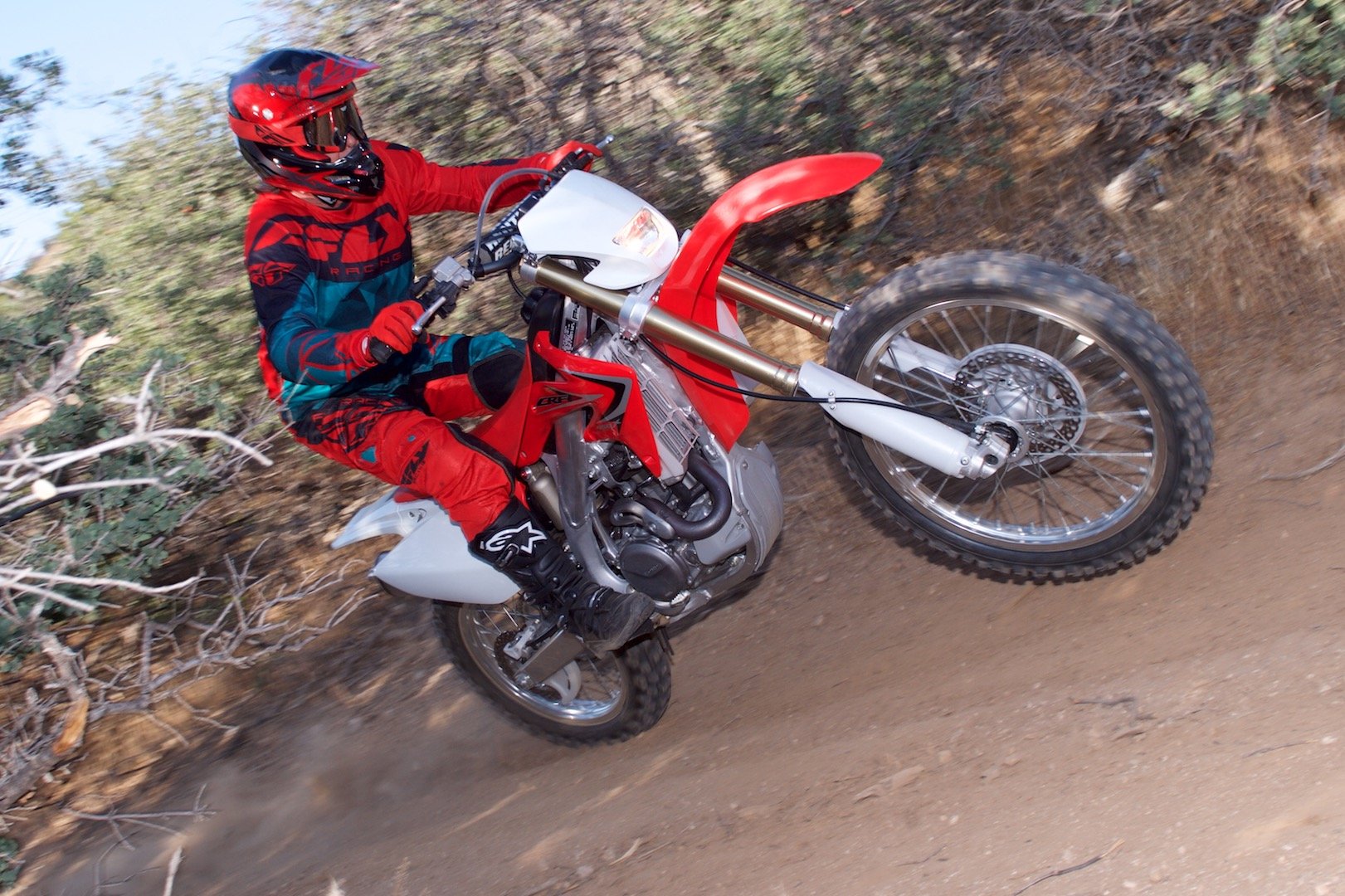 The Japanese—Honda, Suzuki, and Kawasaki—have continued to offer Green Sticker 450s, though they’ve yet to make a 450cc dual-sport bike. At the same time, the Honda CRF450RX and Yamaha YZ450FX are full-on off-road racebikes. Except for the lack of Japanese 450 dual-sport motorcycles, it’s a great time for four-stoke off-roaders.Of all these machines, the Honda CRF450X is the oldest design. Like the CRF450RX racer, it uses a Unicam architecture top end, but it is based on an older CRF450R powerplant. More importantly, it is the last 450-class off-road bike to still use a carburetor. The chassis is now two generations back—remember, 2009 is the base year for the current CRF450X.While it may seem like you are riding a near vintage bike with the 2017 Honda CRF450X, none of these things are particular issues for the non-competitive trail-riding crowd. The carburetor is a fully sorted out 40mm flat-slide Keihin—even in full Green Sticker tuning mode—and the suspension is quite good. The 47mm Showa cartridge fork is fully adjustable, while the shock has such niceties as high- and low-speed compression damping adjustments—more than your average trail rider needs. 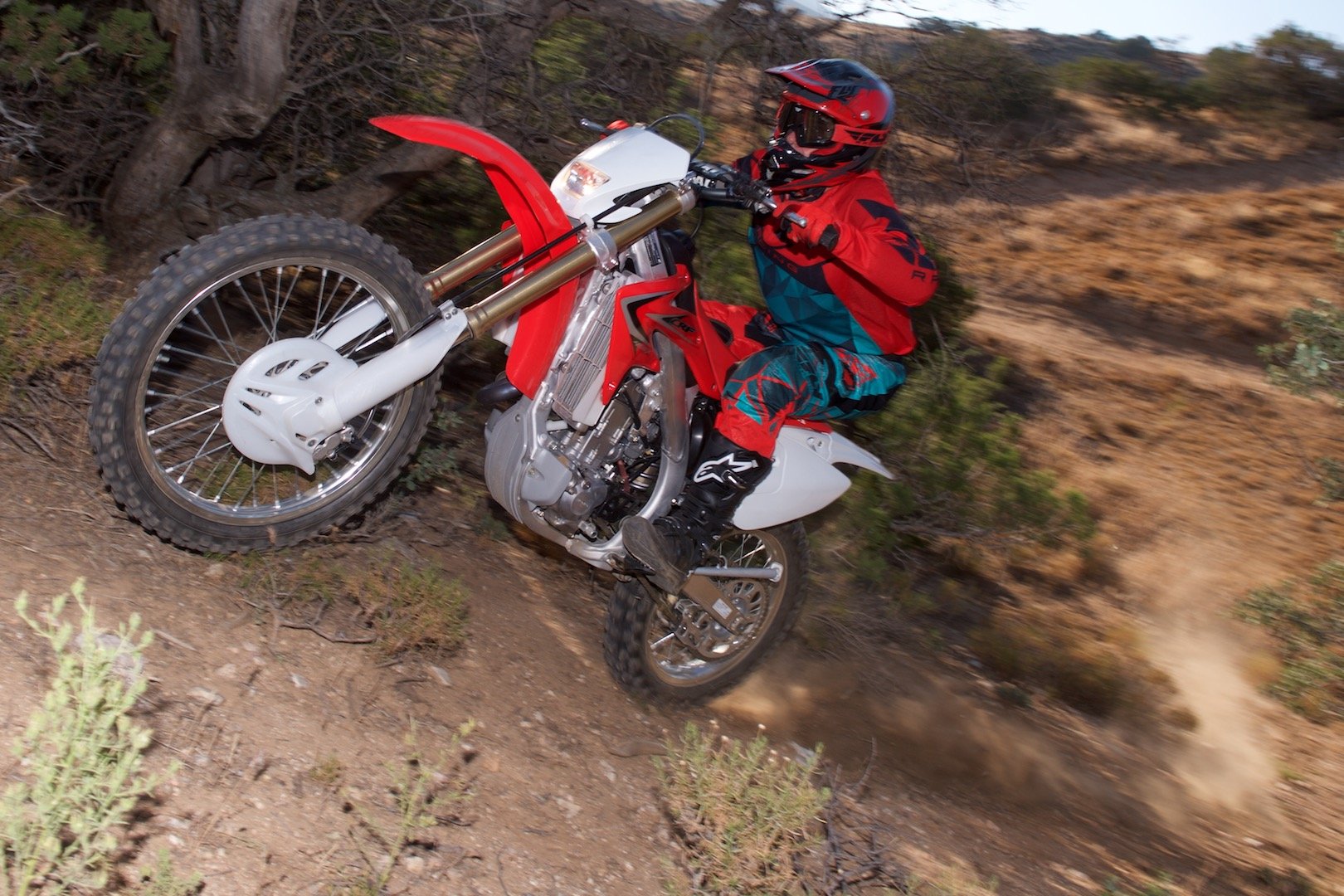 The motocross geometry of the 2017 Honda CRF450X—27.1 degrees of rake and a 58.3-inch wheelbase—means it’s a sharp-handling off-road weapon. Although it is necessary to get up on the tank to effectively corner on the CRF450X, if you put your body into the right position, it will turn on a dime.Honda is aware that the MX-style chassis will be less-than-stable at high off-road speeds. A small Honda steering damper is hidden behind the number plate, with the intention of preventing high-speed headshake.The damper is progressive, so the steering doesn’t feel heavy on tight single tracks. Resistance kicks in as you up the speed, though it’s still not perfect. I had a couple of serious tank slappers in top gear in lightly whooped, heavily tracked sand washes. So, while it undoubtedly helps at speed, the steering damper isn’t a cure-all for the MX geometry.Speaking of high-speeds, the Honda transmission is a five-speed. Although the motor has a wonderful spread of power, a six-speed transmission remains a preferred design. Given that the racing CRF450RX remains a five-speed, a six-speed probably isn’t in the cards in the foreseeable future.Having said that, the gear ratios are spot on, and you won’t be spending a lot of time shifting. There are no hits or sweet spots—it’s all good. Shift early or late—the CRF450X works either way. When you do need to shift, the clutch pull is not onerous, and the transmission shifts flawlessly.As mentioned, the 2017 Honda CRF450X’s motor is a sweetheart. No, it doesn’t have the top-end rip that you get with a race bike. However, it is finely tuned, and the carburetor is outstanding. There are no hiccups or flameouts when wicking the throttle open, and whenever you need to lift the front end, the power is instantly available. The only hint that it’s running lean for EPA busybodies is popping on deceleration. 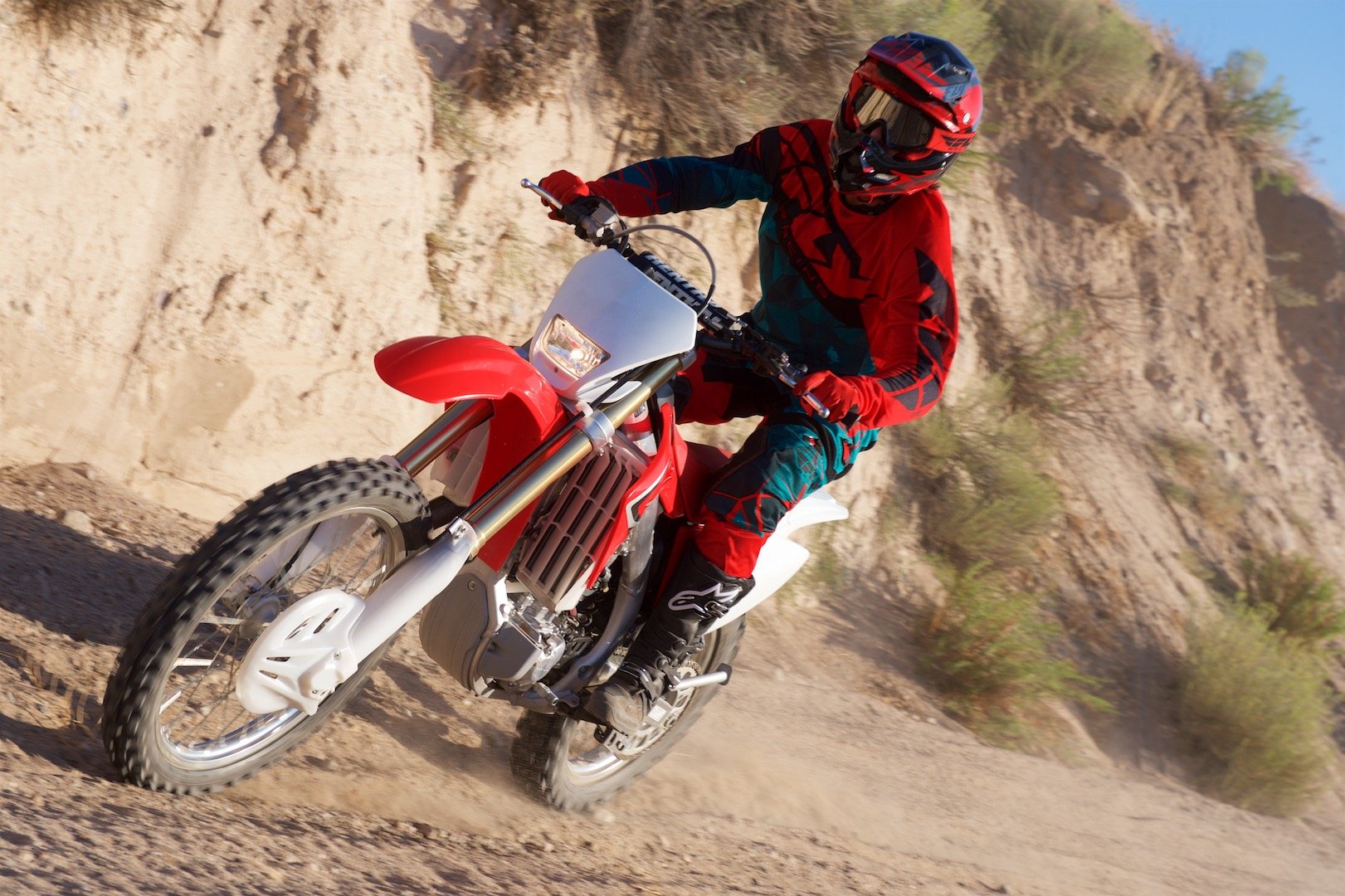 Now, that’s not to say we wouldn’t welcome EFI. In addition to providing more power and better adaptability to altitude changes, it would also extend the range of the sub-two-gallon fuel tank. If your loops look to be longer than 40 miles, budget in the cost of an aftermarket tank—the IMS 3.2 is a popular choice.Single-track trails are great on the 2017 Honda CRF450X. It pulls right from the bottom, and you can dial in exactly how much speed you need—remember, this is in a trail-riding context, not racing. Although the bike is pushing 270 pounds with the tank full, and you have the power of a 450, it’s not a fatiguing or intimidating motorcycle.The older suspension is fully capable in trail riding mode. While I would argue that you don’t need over a foot of travel on a bike with a more casual mission, that’s what you get with the CRF450X.The suspension isn’t whoop-ready, but you don’t really want to skip whoops on a bike this heavy. The same goes for big jumps. It’s not a motocrosser, and it is not trying to be. Jump through whoops and keep the airtime reasonable and you won’t find a thing about the Showa suspension to complain about.For trail riding at high speeds in the desert, the Showa suspension has a nice balance between the stiffness needed and the compliance you want for a ride that’s not punishing. Again, if you aren’t trying to attain race speeds, you will love the CRF450X suspension.On technical trails, you will notice that the CRF450X doesn’t beat you up. The suspension action is supple enough that you get great traction, plus the front end can be pushed down for effective turning.The traction-friendly suspension is a good thing, as Honda has shod the CRF450X with low-spec Dunlops for quite a while. The best move is to pull the Dunlop Sports tires off when you buy the bike and store them for resale time. Get a pair of Dunlop Geomax AT81 tires and live happily ever after. It’s not that the Dunlop Sports tires are awful, but they are outdated and great tires can make a huge difference when it counts. 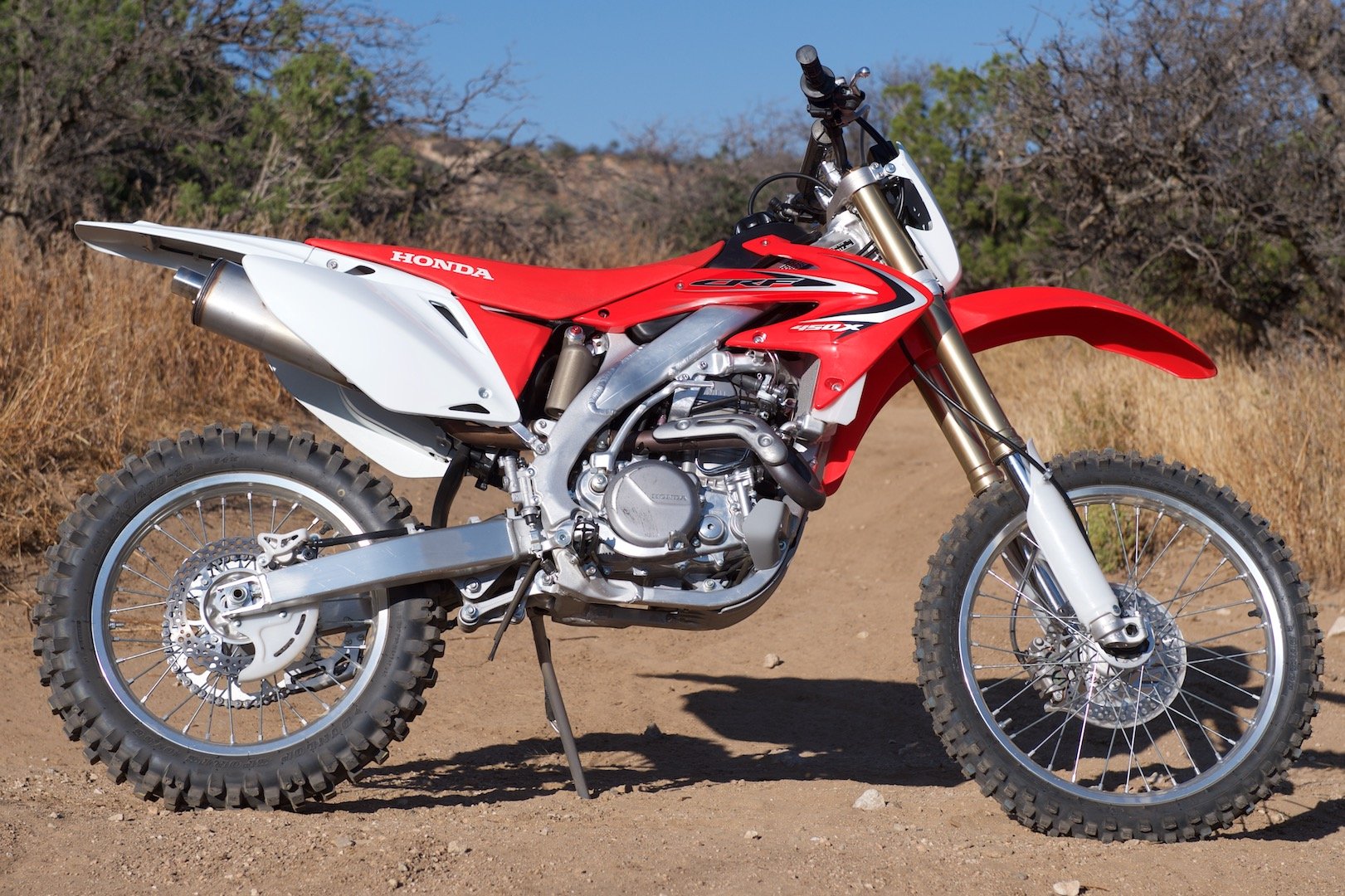 As you would expect, the 2017 Honda CRF450X has MX-style ergonomics. It’s a comfortable off-road motorcycle, and you’ll only need to make handlebar changes if you prefer a tapered aluminum bar over the old-style crossbar Renthal component. Of course, if you like a different bend or rise, that’s reason enough to change.There’s a kickstarter to back-up the electric starter—that is always going to provide peace of mind when off-roading far from your truck. As a carbureted bike, you will need the choke on most mornings and plan some significant warm-up time in cold weather. There is a hot start lever on the clutch perch—never needed it, even with the temps in the 90s.The mechanical odometer is prehistoric, and Honda could upgrade here to a contemporary LCD unit that provides more information—speed and time, for instance. I’d also like to see an update to an LED headlight. The plastic skidplate between the frame rails, along with its winglets, are protection enough for most uses.You can get to the air filter with no tools—excellent. The engine and transmission use different oils—a bit more maintenance, but no big deal. Honda is very conservative with its maintenance intervals, so expect an extremely long life from the motor if you follow them. More casual riders may be tempted to extend maintenance intervals, but you do so at your own risk. 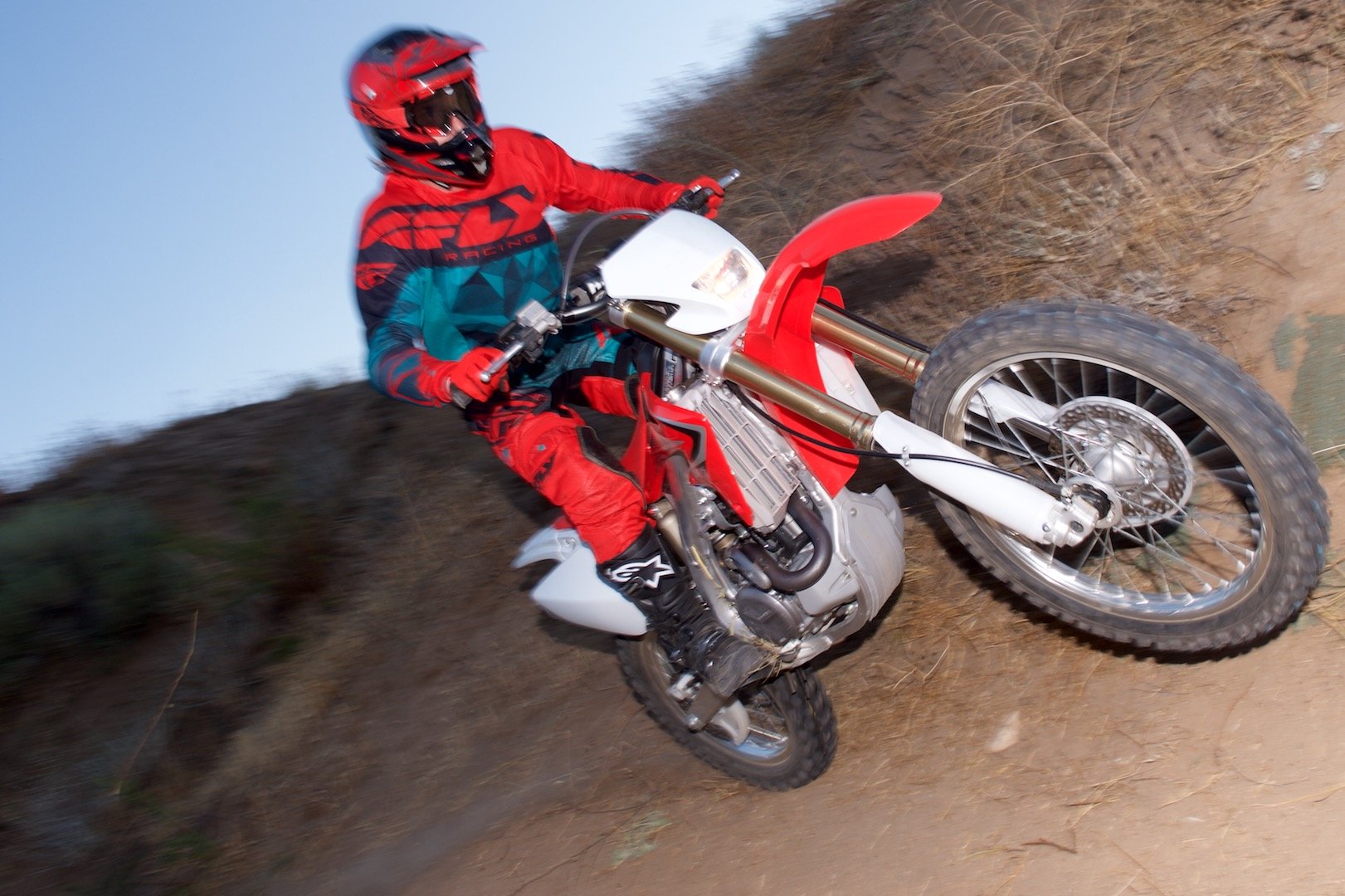 The CRF450X is impressively bulletproof, though not quite as low-maintenance as the old XR400 or XR600. Keeping fresh oil in the motor will make a big difference at a low price in time and dollars.With the 2017 Honda CRF450X you are not getting anywhere near the latest in technology. However, you are getting a well-tested and highly reliable off-road motorcycle that will impress you with its durability and flexibility in use. As 450cc trail bikes go, this is a difficult motorcycle to beat.Photography by Kelly CallanRIDING STYLE