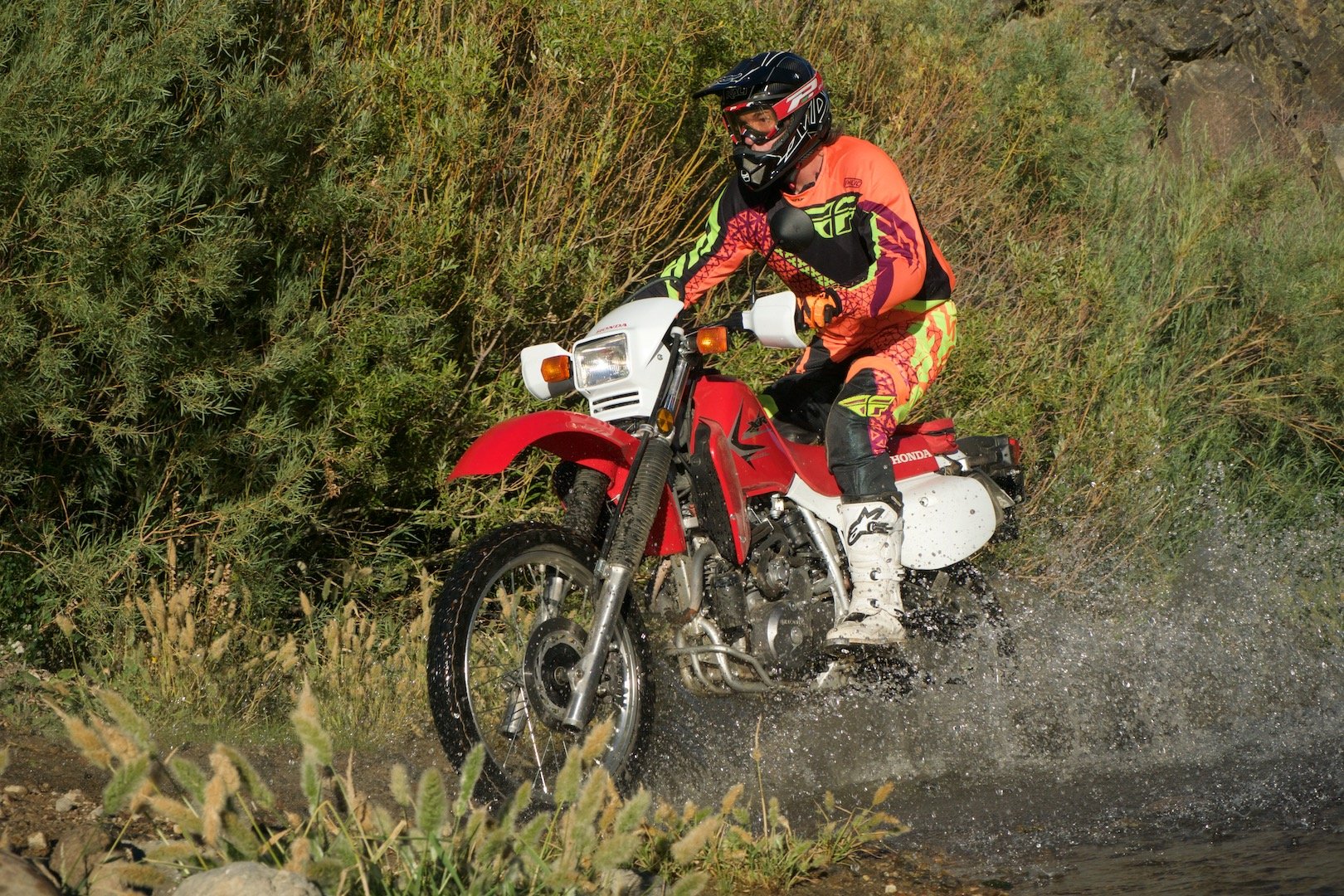 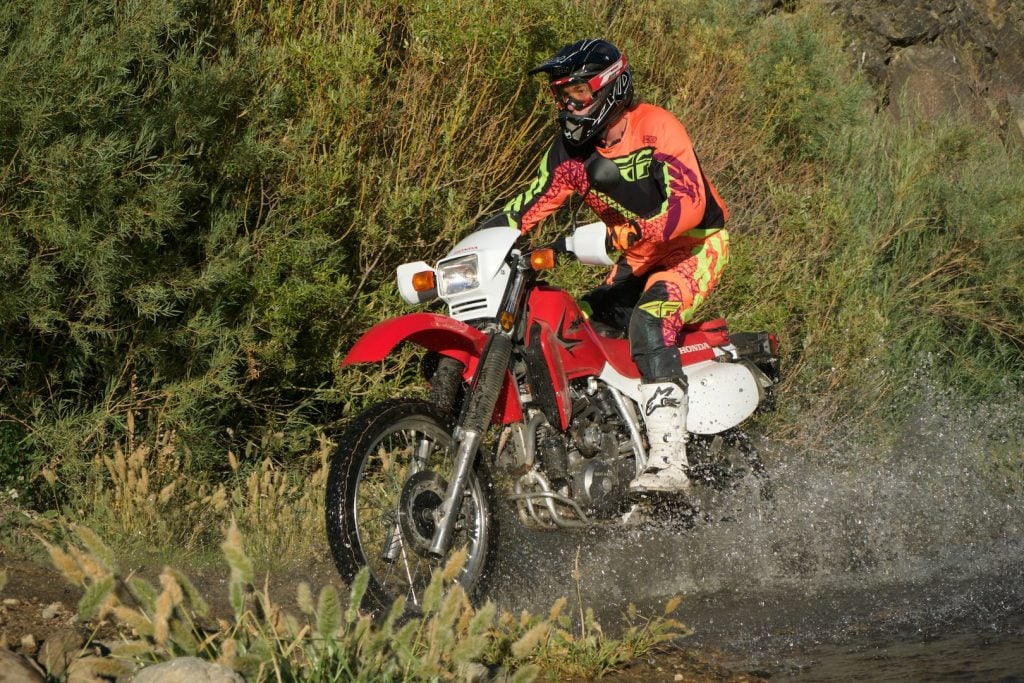 With hardcore off-road manufacturers Beta, Husqvarna, and KTM abandoning their Green Sticker dirt bikes in favor of street-legal race-ready dual-sport motorcycles, one has to wonder if the 2016 Honda XR650L is still relevant. Shouldn’t a Honda CRF450L be replacing the CRF450X?Without question, the Honda XR650L is long in the tooth—extremely long. Now in its 23rd year, the XR650L is essentially unchanged since its introduction in 1993. In many ways, it’s a legitimate retro/vintage dual-sport bike. The styling is obviously dated, from the seat to the plastic to the mirrors, and it remains carbureted and air-cooled. A descendent of the NX650 adventure bike and XR600R off-road enduro bike, the Honda XR650L has some stiff competition in the seriously dirty dual-sport market in 2016. 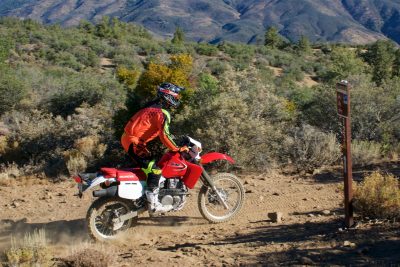 However, there is a catch. If you’re not interested in a competition-style dual-sport bike, and you want something comfortable, reliable, and easy to maintain, the XR650L fits the bill. Its Japanese competitors are also very much based in the past, with both the Kawasaki KLR650 and Suzuki DR650S still sporting carburetors and plenty of weight.The 2016 Honda XR650L is no lightweight at 346 pounds at the curb, but it’s light compared to the 432-pound KLR650 and 362-pound DR650S. Without much argument, the XR650L is the most dirt-worthy of the Japanese 650 dual-sport bikes.With its XR600R heritage, which includes scads of championships in the 1990s by Scott Summers, there is no doubt that the XR650L can be taken on some serious trails. If you’re used to modern high-performance dual-sport bikes, you will be disappointed in the XR650L if you are looking to push it at a race pace—it simply does not want to do that.However, riders who are happy with a medium pace, somewhere between WFO and casual boondocking, the XR650L is a capable machine. I was able to successfully navigate some black diamond trails in Hungry Valley SVRA and Los Padres NF in southern California, and it didn’t take that much effort. In fact, the cushy Showa suspension makes for enjoyable challenging rides, as long as you remember the weight and intention of the Honda XR650L.Navigating on single-track is no problem. Even with the mediocre-at-best Dunlop K850A tires (aired down to 14 psi off-road), the XR650L refused to be stopped by technical sections. Sure, there’s some paddling to be done on loose uphills, and steep downhills require steely nerve (due to a weight and a lack of traction, not brake shortcomings). Also, watch out for the mirrors—as you can see from the photos, one got taken out early. Confidence is the key, as the XR600R chassis will eventually come to the rescue, if you let it, and you can make it through tough challenges. 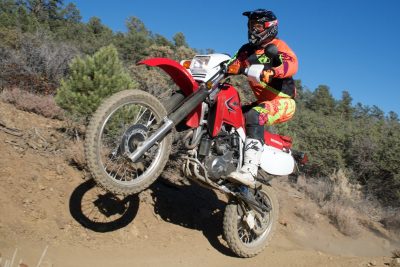 Most of the issues for the Honda XR650L off-road are about weight, height and tires. The 37-inch seat height is tall for a bike weighing 346 pounds. If you throw caution to the wind on the XR650L, be prepared to be picking it up from time to time. However, patience is rewarded, and it makes for a great off-road sightseeing bike.Thanks to the soft suspension and ample seating, you won’t get beat-up off-road as long as you aren’t pushing too hard. It is a comfortable ride with the compliant Showa suspension ably soaking up the smallest trail irregularities. The XR650L isn’t a bike for jumping or whoop-skipping, of course, so slamming into big obstacles is not recommended.Even with the Dunlop K850A tires—which should instantly be replaced by Dunlop D606s before you ever ride it off-road—the XR650L will go where you point it. The geometry and suspension are there for you, and Honda finds a nice balance between responsiveness and stability off-road.Take the 2016 Honda XR650L out into open terrain, and it’s quite nice as long as the trail or road is in decent shape when you click all the way up to fifth gear. It is a classic desert sled. With long legs and plenty of power, it is ideal for a casual LA—Barstow-Vegas run. You won’t be suffering from monkey butt at the finish, and your fillings won’t be rattled from race-spec suspension. The XR650L is far more dirt capable than an adventure bike, yet still able to hang with ADV machines when the dirt speeds pick up thanks to favorable conditions. 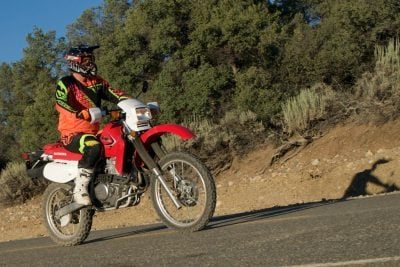 On the street, the XR650L is plenty of fun. It’s light for a street bike and has more cornering clearance than you’ll ever need. It’s easy to learn the traction limits of the stock Dunlops, as they give good warning before letting go.For urban riding and commuting, the XR650L is a blast. You have a nice view thanks to the seat height, and the suspension means you can go anywhere—even if you’re not supposed to. Impromptu trails and jumps are pretty much standard fare in-town. Just look for a tricky route and go for it. Curbs are nothing to fear—heck, neither are stairs.Power is good enough for freeway runs when needed, but you won’t want to tour on the XR650L. The windblast is unabated due to the fully upright seating position, and the wide bars turn your arms into sails. Still, if you need to hit the interstate as part of your ride, don’t worry about it—you can run with the big boys.Twenty-three years in, the 2016 Honda XR650L remains a credible dual sport bike, and it still has its place in the dual sport market. An owner who enjoys the style and function around town need not change a thing to get everything out of his XR650L. It’s capable on single-track trails, especially if you have slipped on true off-road rubber, and it will well serve a rider who enjoys tough trails, but not at race speeds. The retro/vintage Honda XR650L hasn’t just survived into the 21st century—it has continued to prosper.Photography by Kelly CallanRIDING STYLE
Helmet: Kali Shiva
Goggles: ProGrip
Communications: Sena SMH10R
Pants and jersey: Fly Racing Trifecta Mesh Racewear
Body armor: Forcefield Pro Shirt X-V
Gloves: Fly Racing Kinetic
Knee braces: Alpinestars Fluid Tech Carbon
Socks: Fly Racing Knee Brace Moto
Boots: Alpinestars Tech 1