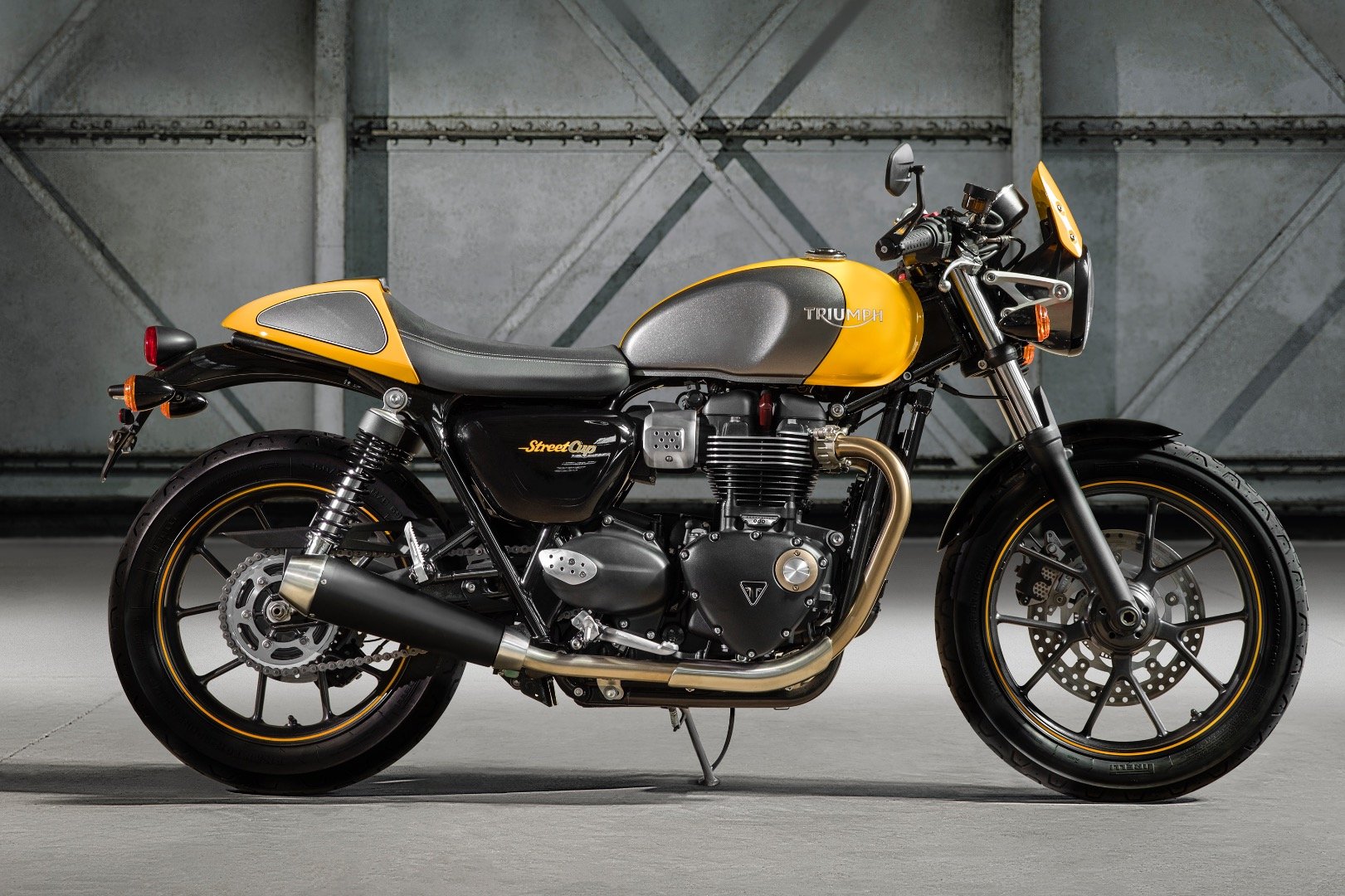 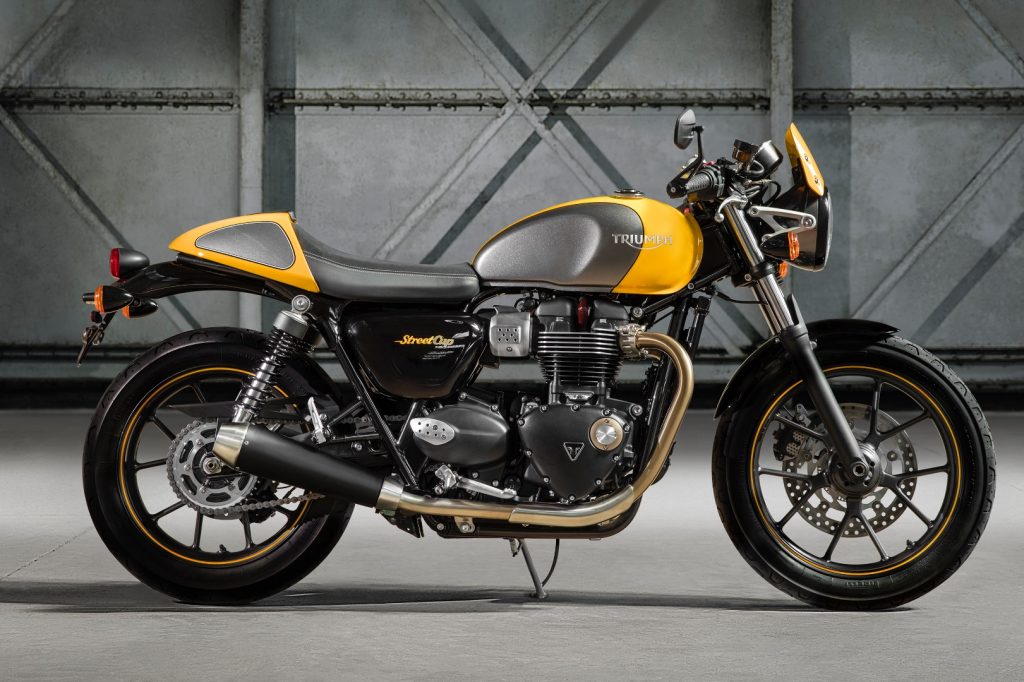 Café racers have been captivating motorcycle enthusiasts since they were being whipped around the side streets of London in the 1960s. Popular then, and even more so now, Triumph has been at the forefront of the café movement since the beginning. After all, it was their bikes that went under the wrench to create a lasting legacy.

Today, the torch burns brightly with the announcement of the 2017 Triumph Street Cup. We’re all anxious to get some seat-time on this production café racer, but until then, we’ll stick with the Fast Facts.

1. Triumph’s Street Twin line was meant to expand. When the Street Twin hit the scene a year ago, many saw it as a great platform for a wide variety of riders, at virtually any skill level. Unsparingly, it got a lot of attention from customer builders. Triumph has tapped that mojo, and now we have the café-racer inspired Street Cup.

2. The Triumph Street Cup has street cred to match. It’s not just a styling exercise. The Street Cup has café racer seat cowls, a lean flyscreen, and bar-end mirrors. Longer rear suspension will encourage a sporting body position, while it makes the handling more aggressive. Plus, of course, there are the Ace low-rise handlebars; all of this speaks to one little number that we’ll happily dig into some corners.

3. The Street Cup has the heart of a true café racer. Bolted into the steel frame of the 2017 Triumph Street Cup is the 900cc High Torque parallel-twin Bonneville engine. 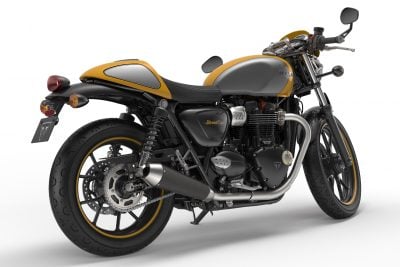 4. The 2017 Triumph Street Cup looks like it’s from the ’60s, but it isn’t stuck in the past. The Street Cup is no Luddite. Featuring ABS and switchable traction control—rider aids you don’t expect on a retro bike. Of course, a completely electronic ride-by-wire throttle is standard, as well.

5. Accessibility is the name of the game for Triumph. One of the greatest strengths that the Street Twin has is how user friendly it is. Despite the more aggressive leaning, Triumph hasn’t cast aside its one-bike-fits-all design narrative. Quoted as having “stand-over” ergonomics, the Street Cup has a seat height of about 30 inches. Combine that with a narrow profile, and the result is a bike that should be highly-maneuverable.

6. Authentic styling is at the core of the Street Cup. The Street Cup wears its heart on its sleeve, and that’s not something we’d admonish. With an eye to the urban styling, and aggressive rider positioning, the Street Cup is shaping up to be a reliable, “out of the box” option for anyone with vintage dreams.

7. The twin clocks of the Street Twin look the part, but are so much more. To the untrained eye, these retro clocks pulled right off the Thruxton R could pass as the real McCoy. But that’s the point—they only look the part. Glancing down, at the rider’s beck and call, you has access to a gear position indicator, odometer, two tripmeters, range, fuel level, fuel consumption rates, clock, service indicator, and lastly, traction control settings. That’s quite a bit of information, and all of which comes in handy. 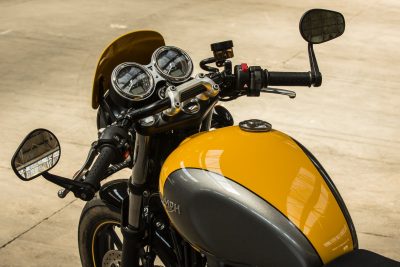 8. Paint is an important component of the Street Cup. The 2017 Triumph Street Cup will be available in two colorways—Racing Yellow and Silver Ice with Jet Black hand-applied coach lining and Racing Yellow wheel pin striping or Jet Black and Silver Ice with Gold hand-applied coach lining and Gold wheel pinstriping. However, it is the attention to detail that is catching out eye. If you look closely, one will notice silver contrast stitching. Between the number-board graphics spattered throughout, we’re quite pleased with the choices at hand. Triumph is also claiming that color matching is done throughout, so paneling won’t be a disappointing shade or two off.

9. Café racers are about customization, so you’ll be able to get to it right out of the gate. Café racing was less about racing and more about letting your personality be expressed through your bike. Triumph will feature over 120 components that ranging from performance mods such as Vance & Hines exhaust systems, to billet levers, tail tidy units, and most surprisingly, fully adjustable Fox shocks.

The Street Twin made quite an impression on the Ultimate Motorcycling staff this year, and we suspect the 2017 Triumph Street Cup will do the same. As soon as we get your mitts on one of these, we’ll let our readers know. Until then, keep your browsers tuned to UltimateMotorcycling.com for more insights from Intermot.