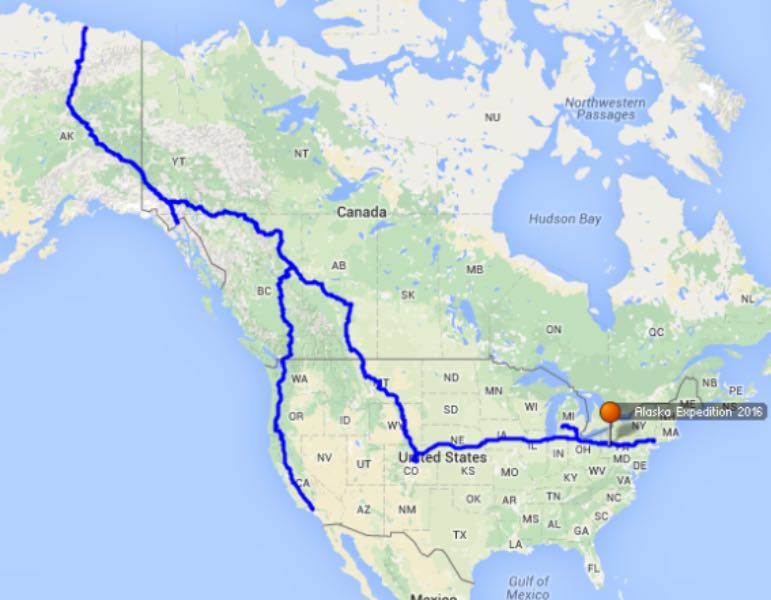 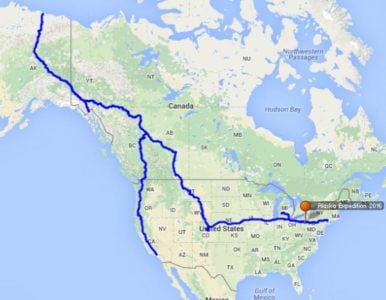 Deena Mastracci is no stranger to setting endurance driving records. She holds five – all from journeys in electric Tesla P85 D. Mastracci, along with her fiance Carl Reese and friend Rodney Hawk, hold the Guinness World Record for the “Shortest Charging Time Cross-Country Trip in an Electric Vehicle.”Also, as part of Reese’s driving team, she has helped set records for the “Fastest Time for Crossing the USA in an Electric Vehicle (EV)” and for a “Double Transcontinental Trip (LA-NYC-LA).”Mastracci knows her way around automobiles, but how about motorcycles? She just submitted a record attempt to the Guinness World Records for “Longest Distance Traveled by a New Motorcycle Licensee.” First Mastracci bought a used BMW F800GT from West Valley Cycle Sales in Los Angeles, then got her motorcycle license June 1.After leaving the parking lot, her record-journey began, which included traversing Alaska, the Arctic Circle and the United States. All together, she rode 11,236 miles in 27 days.Mastracci’s cross-country trip began June 1 in Santa Clarita, Calif. She had no prior on-road experience other than that gained at a one-day class at Streetmasters Motorcycle Workshops — on a closed racetrack — as part of her preparation and a Motorcycle Safety Class given at the local college for her motorcycle test.The coast-to-coast ride by way of the Arctic Circle was no vacation as Mastracci encountered a variety of challenging road conditions, including snow, mud, ice, 50 mph wind, flooded roads and golf ball sized gravel.Her route included the full length of the Dalton Highway (one of the world’s most dangerous roads), a treacherous road that leads to Dead Horse, Alaska over the Brooks Mountain Range. Her journey included pit stops in Prudhoe Bay, Alaska; Denver, Colorado; Brookfield, Connecticut; and Grand Rapids, Michigan before concluding in New Bethlehem, Pennsylvania.Mastracci covered an average of 400 miles per day. During the third week of her journey, she traveled 1,000 miles from Denver, Colorado to Hammond, Indiana within a 24-hour time period, a feat that is only attempted by the most seasoned riders, often referred to as an “Ironbutt Challenge.”Mastracci’s total mileage of 11,236 miles surpassed the previous record of 9,000 miles held by Clif Chu set back on July 23, 2012. Clif’s journey was witnessed by William Schoetteler.Mastracci’s very first motorcycle ride was not only a successful attempt to set a record for “Longest Distance Traveled by a New Motorcycle Licensee,” but was also a way to bring attention to the work of the Motorcycle Relief Project, a nonprofit charity that helps veterans with PTSD and other injuries. The group arranges multi-day motorcycle tours and other activities and also offers counseling for veterans in an effort to decrease suicides. Additionally, Mastracci hoped her ride would inspire other women who may feel intimidated by driving a motorcycle.“My journey was the trip of a lifetime: a terrifyingly beautiful ride and an incredible learning experience all in one,” said Mastracci. “Everything about the voyage was a challenge for me. From navigating in traffic to maneuvering through mud and ice, it was very tough. While challenging, this journey was nothing compared to the trials that our armed forces face on a daily basis, which is why the work that the Motorcycle Relief Project does is so important to me.”Reese, who set the fastest LA to NYC time aboard a BMW K 1600 GT, followed Mastracci on the journey on a separate motorcycle as a safety precaution, said, “It was remarkable to see how Deena evolved as a rider over the course of her journey. Going from no on-road experience to tackling more than 11,000 miles over the course of 27 days is nothing short of epic! I am so proud of her for taking on and conquering such a challenge.”Here’s a look at Deena’s finish: Save