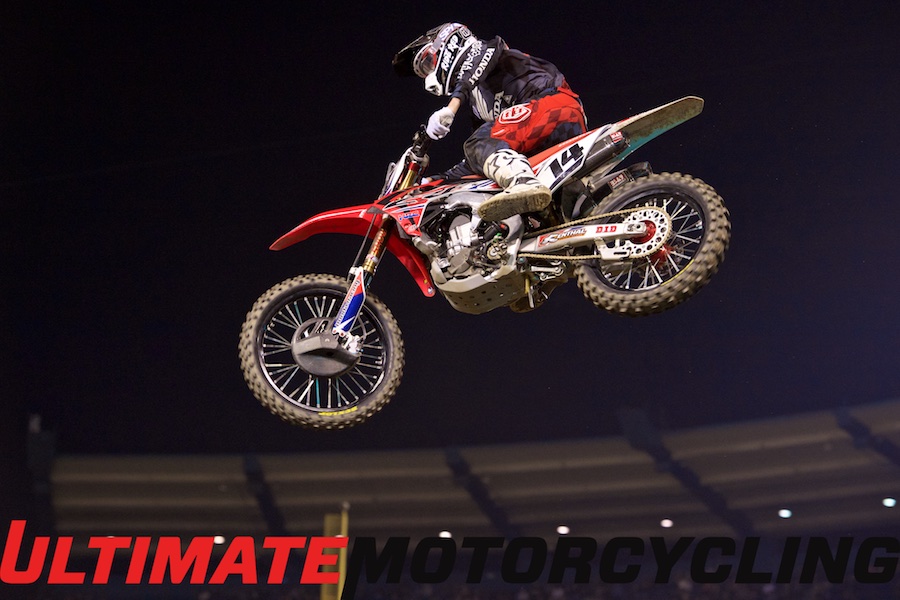 Round 4 of the Monster Energy Supercross series headed north to Oakland, which provided action-packed racing and a tightening of the points standings.Team Honda’s Trey Canard took the victory, his first since Arlington, Texas in 2011. The Oklahoma rider was on his game all day, setting the fastest lap time in both timed qualifying practices.After a 13th place start, Canard made his way up to 5th place by Lap 4. By Lap 7, he was up to 2nd place challenging Two Two Motorsports’ Chad Reed for the lead. Canard cut underneath Reed before one of the triple jumps to take the lead. He put a gap between himself and the rest of the field to take his first victory of the season unopposed.Trey Canard: “I don’t know what to say. I didn’t think I would be on the podium after the first few laps; it was busy out there. It has been a long haul to get here on top of the podium and I am really happy about it.”The shock of the night came when points leader and two-time 2015 winner Ken Roczen came up short on a triple jump immediately after passing Reed for the lead. Clearly in pain after landing of the face of the last jump, Roczen went off the side of the track. He remounted his RCH/Soaring Eagle/Jimmy Johns/Factory Suzuki RM-Z450 to salvage a 16th place, dropping to 2nd place in the points standings.Red Bull KTM’s Ryan Dungey passed Reed on Lap 16 for 2nd place, marking his second-consecutive runner-up finish of the year. Dungey’s consistency is paying off, as he leaves Oakland with a four-point lead in the championship standings as well as the red plate.Ryan Dungey: “All things considered, tonight’s track was really tough. I wanted to make up some ground on Trey (Canard) for the lead, but it didn’t work out. It’s nice to take over the points lead, but the season is still young.”After getting landed on by Canard the previous week at Angel Stadium, TwoTwo Motorsport’s Chad Reed found some redemption by rounding out the podium in 3rd, his best finish of the season. The Australian rider took the lead from Andrew Short on the opening lap, only to be passed by Ken Roczen shortly after.Reed repassed Roczen after the German rider went down, but later was overtaken by Canard and was unable to challenge back. Reed was also passed by Dungey after going off the track and having to reenter after riding around a 180-degree corner. Reed maintained 3rd place position until the end of the 20-lap race.GEICO Honda’s Eli Tomac racked up some much needed points with a 4th place finish on the night, while Team Honda rookie Cole Seely rounded out the top five. Autotrader/Toyota/Yamaha’s Justin Barcia, Yoshimura Suzuki’s Blake Baggett, Monster Energy Kawasaki’s Davi Millsaps, BTO Sports KTM’s Andrew Short, and Rockstar Energy Husqvarna’s Jason Anderson rounded out the top ten.2015 Monster Energy AMA Supercross Results – Round 4 – Oakland
1. Trey Canard – Honda CRF450R
2. Ryan Dungey – KTM 450 SX-F Factory Edition
3. Chad Reed – Kawasaki KX450F
4. Eli Tomac – Honda CRF450R
5. Cole Seely – Honda CRF450R
6. Justin Barcia – Yamaha YZ450F
7. Davi Millsaps – Kawasaki KX450F
8. Andrew Short – KTM 450 SX-F Factory Edition
9. Blake Baggett – Suzuki RM-Z450
10. Jason Anderson – Husqvarna FC450
11. Jake Weimer – Kawasaki KX450F
12. Brett Metcalfe – Suzuki RM-Z450
13. Kyle Chisholm – Kawasaki KX450F
14. Phil Nicoletti – Yamaha YZ450F – Honda CRF450R
15. Ken Roczen – Suzuki RM-Z450
16. Vince Friese – Honda CRF450R
17. Fredrik Noren – Honda CRF450R
18. Kyle Patridge – Honda CRF450R
19. Killian Rusk – Yamaha YZ450F
20. Martin Davalos – Husqvarna FC450
21. Josh Grant – Kawasaki KX450F
22. Broc Tickle – Suzuki RM-Z4502015 Monster Energy AMA Supercross 450SX Season Standings
1. Ryan Dungey, Belle Plaine, Minn., KTM, 82
2. Ken Roczen, Clermont, Fla., Suzuki, 78
3. Trey Canard, Edmond, Okla., Honda, 68
4. Eli Tomac, Cortez, Colo., Honda, 64
5. Jason Anderson, Edgewood, N.M., Husqvarna, 62
6. Justin Barcia, Greenville, Fla., Yamaha, 58
7. Cole Seely, Laguna Beach, Calif., Honda, 45
8. Davi Millsaps, Murrieta, Calif., Kawasaki, 44
9. Andrew Short, Smithville, Texas, KTM, 44
10. Chad Reed, Dade City, Fla., Kawasaki, 42