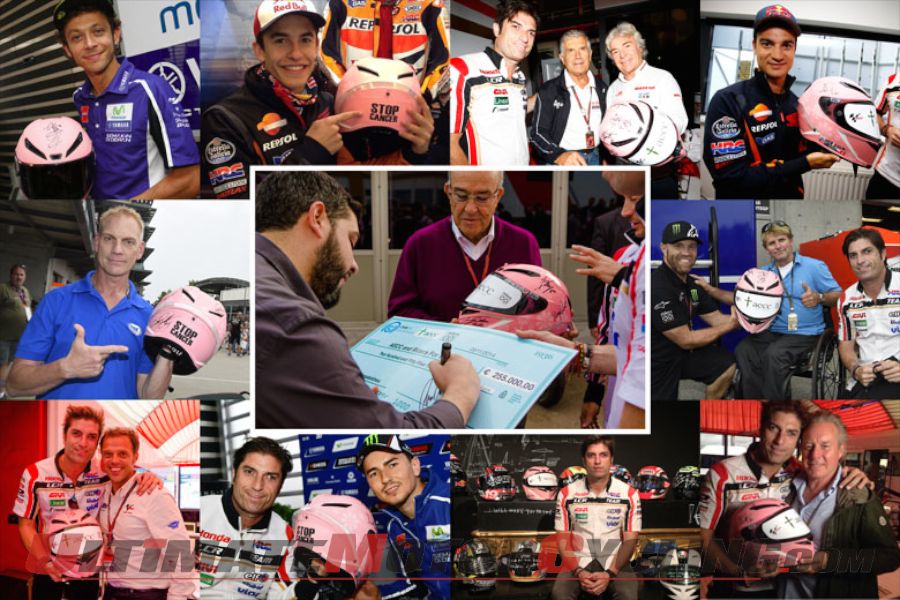 Stop Cancer HelmetA special “Stop Cancer” AGV helmet signed by 12 World Champions sold for a record-breaking $314,000 (€255,000) during a recent auction.All proceeds assist the Spanish Association Against Cancer (AECC) and Riders for Health, the official charity of MotoGP, and this helmet becomes the most-expensive helmet in the world.The idea came from a Spanish university student Alberto Hernandez and Oscar Haro a member of the CWM LCR Honda Team run by former grand prix winner Lucio Cecchinello. Their plan? Create a pink helmet and have it signed by some of the most famous riders in the world.Work moved quickly, and soon the lid donned the signatures of Giacomo Agostini, Angel Nieto, Valentino Rossi, Jorge Lorenzo, Marc Márquez, Dani Pedrosa, Wayne Rainey, Loris Capirossi, Àlex Crivillé, Wayne Gardner, Scott Russell and Randy Mamola.These 12 World Champions across all classes have a total of 58 work titles. The helmet was also features the signature of Carmelo Expeleta, the CEO of Dorna Sports, the promoter of MotoGP.With coverage from Dorna, TV stations, radio, press and social media, the project was observed by 10-million people worldwide.Anthony Constantinou, CEO of CWM FX and the Title Sponsor of the CWM LCR Honda Team from 2015, was at Valencia for the last race of the MotoGP season. Having heard about the auction, he decided to take part online and offered up a staggering sum of £200,000 (€255,000), which left everyone involved speechless, LCR reports.Anthony Constantinou said: “With so many families affected by cancer, it’s important that we all join together to support the charities which provide vital services for patients and their loved ones. The team has done an excellent job in raising awareness and funds. I’m pleased I could play a part in this deserving cause and I hope it inspires others to get involved in the fight against cancer.”This makes the Stop Cancer helmet the most expensive in the world. The figures raised exceed other records for lids, such as one owned by Ayrton Senna, which sold for $116,000 in 2012, and another by Sebastian Vettel, which sold for $123,000.