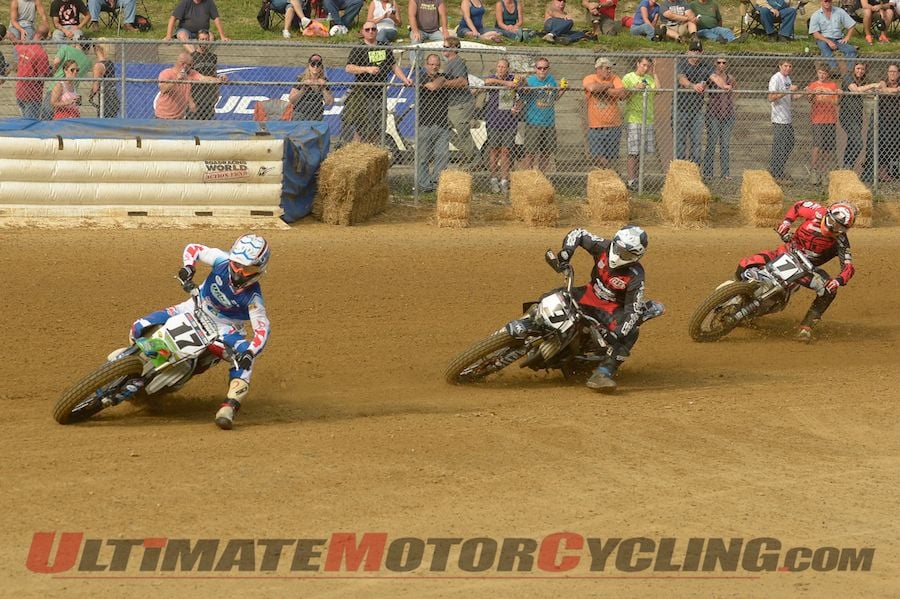 2014 AMA Pro Flat Track Title HuntWhile many people assumed, barring something unforeseen, Henry Wiles would likely ride his No. 17 Don’s Kawasaki machine across the finish line first for the 10th straight time at the Peoria TT, it was anything but certain what look the AMA Pro Flat Track Grand National Championship points battle would take following the event at Thunder Valley on Sunday.Unsurprisingly, it was Wiles that made the biggest jump in points, moving from eighth to fifth thanks to his second win in three races. And while the heavy favorite was fastest all day, he still had to work for the victory, especially the days before.“This week, I was really tired,” Wiles said. “I got really sick. I just had to quit working one night on the bikes. That’s where I had some good guys to support me and help me out and keep the show rolling. It wasn’t quite the flu, but I was pretty beat down. It’s always something different. I’ve come in here with some injuries. I can sit here and ramble on for a long time why there’s a lot of things that are special about this place.”The top three championship contenders remained the same, but the race became as tight as ever with points leader Jared Mees putting his No. 9 Montgomeryville Cycle Honda in the second spot and lengthening his still narrow lead to nine points over Bryan Smith.Mees is happy to lead heading into Virginia, but wanted the top spot on the podium in Peoria.“I feel good, I don’t even know where Bryan finished,” Mees said. “The biggest thing is, I was looking for the win. I wanted to beat Henry, and still do.”Smith rode his No. 42 Villa-Esparza/Crosley Radio Kawasaki to seventh to maintain a lead over the championship third place rider Jake Johnson. Johnson was third on his No. 5 Ramspur Winery Honda, pulling within five points of Smith and just 14 back of Mees as the series rolls to the Virginia Mega Mile.“We’re consistent, but to win this deal, we need to get some wins,” Johnson said. “Jared’s won some races, Bryan’s won some races, and that’s what it’s going to take to get the points, because those guys are right there on the podium every week too. To beat them, it’s going to be a win, so we just gotta keep doing what we’re doing, work a little bit harder.”Sandwiched between Johnson and Wiles is Kenny Coolbeth, who was 16th in Peoria on his No. 2 Zanotti Racing Honda. Coolbeth’s struggles in TT events hurt his chances for a title, but he’s won on miles and half-mile circuits already this year and could easily put a string of victories together and reignite his championship hopes.Sammy Halbert (Fredericktown Yamaha) is sixth in points, five behind Wiles (144-139), and defending GNC champion Brad Baker (Brothers Power Sports) sits seventh with 132 points. Stevie Bonsey (Zanotti Racing), Brandon Robinson (USC Kawasaki) and Briar Bauman (Rod Lake Racing) round out the top 10, respectively.In the AMA Pro Flat Track Pro Singles title hunt, Ryan Wells moved back into the picture in a big way at Peoria. With second place Davis Fisher sitting out following an incident at the Indy Mile and leader Kyle Johnson crashing out of the Peoria TT, Wells was able to put his KTM on the podium in third and cut his deficit to five behind Fisher and 13 back of Johnson.Bronson Bauman was second at Peoria on his Rod Lake Racing Honda and closed his margin from fourth in points. Bauman and Dan Bromley (Bromley Brothers) are the only two Pro Singles riders to finish in the top 10 in each of the last four events and sit fourth and fifth, respectively with 119 and 110 points.“This year has been a lot better of a year (than last), I’ve been pretty much climbing through the points all year, which is nice,” Bauman said. “It’s nice to be up there … I’m moving up.”Jacob Lehmann (Ride Motorsports) became the sixth different rider to take a Pro Singles checkered flag this season. The Washington native was fastest in qualifying, but trailed Johnson before he went down with five laps to go. He held off a hard charge from Bauman who had a nice run down the final stretch, but couldn’t pull in front.AMA Pro Flat Track Experts Top 10 in points
1. Jared Mees 204
2. Bryan Smith 195
3. Jake Johnson 190
4. Kenny Coolbeth 160
5. Henry Wiles 144
6. Sammy Halbert 139
7. Brad Baker 132
8. Stevie Bonsey 123
9. Brandon Robinson 117
10. Briar Bauman 97AMA Pro Flat Track Pro Singles Top 10 in points
1. Kyle Johnson 150
2. Davis Fisher 142
3. Ryan Wells 137
4. Bronson Bauman 119
5. Dan Bromley 110
6. Jarod Vanderkooi 100
7. Brandon Wilhelm 99
8. Dylan Morin 70
9. Dominic Colindres 69
10. Justin Jones 56Up next
The stars of AMA Pro Flat Track will compete in the Virginia Mega Mile at Colonial Downs in New Kent, Va., on Aug. 23. The 1.25-mile circuit is the longest on the Grand National Championship schedule.How to Watch:
FansChoice.tv will be the official home for live streaming coverage of AMA Pro Flat Track and AMA Pro Road Racing events in 2014. The site will also provide coverage of IMSA’s development and single-make series, and NASCAR’s touring and weekly series.