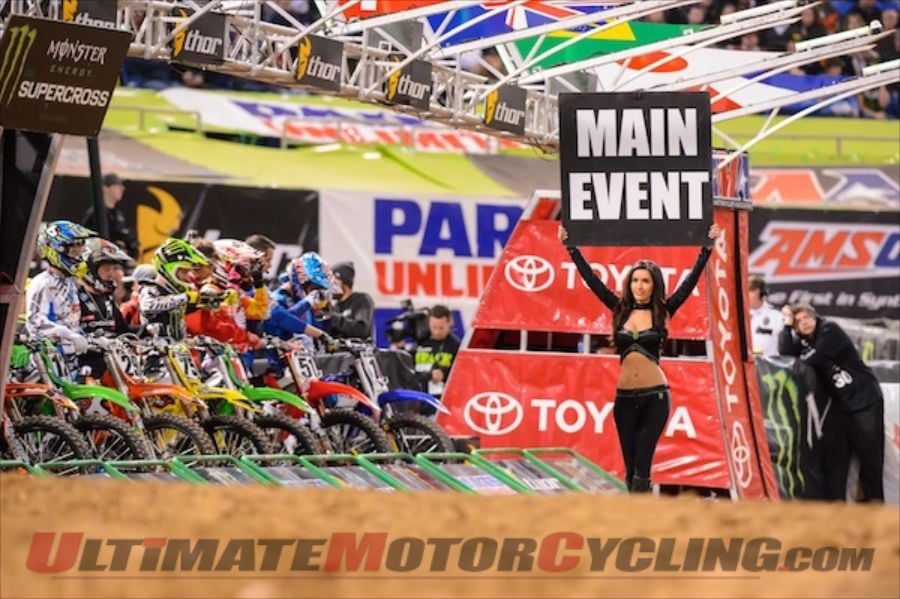 2013 Monster Energy AMA SupercrossSpoiler Alert: 2013 Monster Energy AMA Supercross results from Hubert H. Humphrey Metrodome in Minneapolis listed belowFor the first time in four years, the Monster Energy AMA Supercross Championship returned to Minneapolis, the action getting underway Saturday evening at the Hubert H. Humphrey Metrodome.And taking the win before nearly 49,000 fans at round 14 of 17 was the home favorite – Minnesota native Ryan Dungey, who is from Belle Plaine, just outside Minneapolis.Dungey broke Monster Energy Kawasaki’s Ryan Villopoto’s streak of five consecutive wins. But Villopoto fought hard, and took second. Taking the final podium position was the only other rider to lead the Supercross points’ race this season was Rockstar Energy Suzuki’s Davi Millsaps.When the 20-lap race began, MotoConcepts Racing Suzuki’s Mike Alessi took the Nuclear Cowboyz Holeshot Award. But soon Villopoto was in the lead, followed by Dungey. The next rider to pass Alessi was Millsaps.Villopoto led the first 15 laps, followed about a second back by Dungey. Both Ryans opened up a gap on the remaining field. On lap 16, Dungey gained much ground on Villopoto due to the two encountering lap traffic. On that lap, Dungey passed Villopoto, and the two dueled, swapping the lead.But it was Dungey who came out on top of this KTM SX-F 450, which was his second of 2013 SX season, and the 2011 Supercross’ champs 13th of his 450 SX career.Ryan Dungey (Red Bull KTM SX-F 450) says: “Man, what a ride. Ryan [Villopoto] and I put on a hard charge and he kept me honest the whole way. It’s been a while since I’ve been on top of box, but, man, in front of all these fans it was amazing. We could hear them out there.“It was pretty loud and I’ve never felt anything like it. This is amazing to win in front of the home crowd, and I never could have dreamed something like this.”As for the reigning AMA Supercross champion, Villopoto has now took a podium finish in the last eight rounds.Ryan Villopoto (Monster Energy Kawasaki KX450F Supercross) says: “Me and Ryan [Dungey] had a hell of a race out there,” said Villopoto. “The fans were unbelievable. I knew they were rooting for Ryan, but it was awesome to hear them in every turn. It makes it easy to race when they’re so pumped about it. The track was tough, which made it one-lined in some areas, and that allowed [Ryan] to see where I was going and try something else. It was a good night overall.”Millsaps took third, followed by Muscle Milk Honda’s Justin Barcia and TwoTwo Motorsports Honda’s Chad Reed.With his win, Dungey moved past Millsaps into second place in the points. Dungey is now 22 points behind Villopoto with three rounds remaining.In the 250SX Class, Marvin Musquin made it a sweep for Red Bull KTM by claiming his fourth win in five races with a wire-to-wire effort.The KTM SX-F 250 rider took the lead out of the first corner to claim the Nuclear Cowboyz Holeshot Award. Behind him, several riders jockeyed for position with GEICO Honda’s Wil Hahn, the championship leader, and Rockstar Energy Racing’s Blake Wharton assuming second and third, respectively. Shortly thereafter, Hahn and Wharton began to battle for position, which allowed Musquin to open a significant gap over the field, Feld Motor Sports says.Hahn eventually put some distance on Wharton for second, while Monster Energy/Pro Circuit/Kawasaki’s Tyler Bowers, the reigning three-time AMSOIL Arenacross Champion, closed in on third. Bowers made an aggressive pass on Wharton on Lap 2, but the two stayed mere bike lengths apart, Feld Motor Sports says.On Lap 7, Wharton gained an advantage coming out of the whoops and moved inside Bowers heading into the following turn. Bowers attempted to maintain his line, causing the two to make contact and sending Bowers to the ground. He remounted in fifth and would remain there for the remainder of the race, Feld Motor Sports says.Musquin led all 15 laps and won by more than eight seconds.Marvin Musquin (Red Bull KTM SX-F 250) says: “It’s a great day,” exclaimed Musquin. “I was fastest in practice, I won my Heat Race, and I won the Main Event with the holeshot. It was a perfect day and a great feeling. I just try to win and don’t worry about what happens. I didn’t make any mistakes and got the holeshot, then I did my best.”Hahn finished second with Wharton in third.Wil Hahn (GEICO Honda CRF250R Supercross) says: “I’ve been strong and been confident. I’m bummed I haven’t been able to get a win, but it was still a good night. We have the points lead and we’re ready to go win this thing in Vegas.”Hahn’s lead in the Eastern Regional 250SX Class Championship now sits at five points over Musquin as both riders search for their first career Monster Energy Supercross titles. The riders will take a break from competition for the next two weeks before returning to action on Saturday, May 4, for the season finale in Las Vegas, Feld Motors Sports says.CBS will broadcast 2013 Minneapolis 450 Supercross at noon EST on CBS, and the 250 SX class at 4:30 p.m. EST on SPEED.The racing resumes Saturday, April 20, at Seattle’s CenturyLink Field.2013 Minneapolis Supercross 450 SX Class Results:2013 AMA Supercross 450 SX Class Season Standings:2013 AMA Supercross Eastern Regional 250 SX Class Results:2013 Eastern Regional 250 SX Class Season Standings: