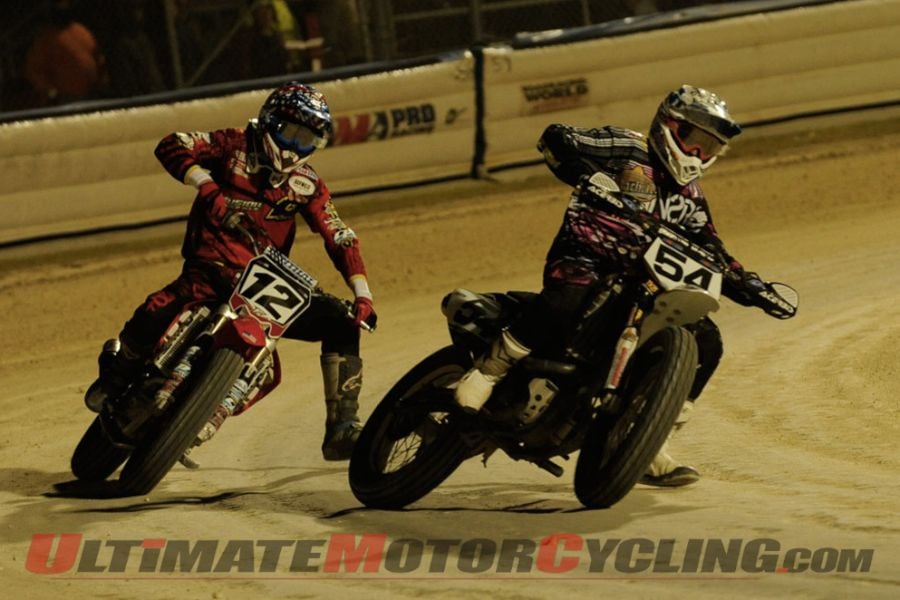 2013 AMA Pro Flat Track ResultsIt was an uncharacteristically cold night under the lights at DAYTONA Flat Track for the AMA Pro Flat Track presented by J&P Cycles season opener.Fans witnessed Mikey Rush (Machete Energy/Honda CRF450R) capture the Grand National checkered flag in what proved to be an impressive showdown between several prominent riders.Lap 18 is what told the story in tonight’s 25 lap shootout. Brad Baker (Specialty Fabrication Incorporation/Honda CRF450R) seemed to have everything under control until that particular lap when Rush edged him out on turn four to steal the lead and surrender nothing for the final seven laps.“First of all, I just want to say that I love Daytona, this place is extremely special to me,” said Rush. “Brad made it extremely difficult for me tonight but I was lucky to make that pass late in the race and eventually stick it for the win. The feeling I have right now is incredible and I love competing against these guys.”Rush’s surgical pass of Baker on lap 18 was a game-changer and it’s safe to say that the Californian was telling the truth when he stated that Daytona is a special place to him, as his only two professional wins have come at this venue. Rush won at the Municipal Stadium circuit in Daytona back in 2007 and again here tonight.“So close but so far away,” said a discouraged Baker. “I felt him breathing down my neck and unfortunately I let him slip by. I have to give Mikey credit for running an excellent race though, he deserves it. I look forward to giving it another shot tomorrow night.”Defending 2012 AMA Pro Grand National Champion and tonight’s Dash for Cash winner Jared Mees (Montgomeryville Cycle/Honda CRF450R) got the holeshot in the main event but surrendered it immediately to Baker. However, Mees battled it out until the very end and came away with an impressive third place finish.Final results: 1st – Rush, 2nd – Baker, 3rd – Mees, 4th – Wiles, 5th – RobinsonAMA Pro J&P Cycles Pro SinglesIn his first career race as a professional, Kyle Johnson (Boughner Racing/Kawasaki KX450F) took no prisoners Thursday night as he cruised to a dominating victory. Johnson was the only rider in the field mounted on a Kawasaki and he took full advantage of the power it produced.Johnson, who started on the pole, got the holeshot to begin the race, only to see defending 2012 AMA Pro J&P Cycles Pro Singles Champion Stephen Vanderkuur (Parkinson Brothers Racing/Honda CRF450R) crash and force a complete restart.Johnson, however, didn’t lose focus as he repeated with yet another holeshot on the second go-around. On lap three, Mike Poe (CCBC/Honda CRF450R) robbed Johnson of the lead only to forfeit it back to Johnson on lap 11. The rest of the race was seemingly uncontested for Johnson, as he won by over a full second.“I couldn’t be more satisfied with the way I performed tonight,” said Johnson. “My bike was unbelievable and everything really came together when it mattered the most. I reclaimed the lead late in the race and that was all I needed to close it out. I’m feeling great about the win right now and can’t wait to get back out there again.”One man’s success is another man’s disappointment. Reigning champ Vanderkuur had high hopes going in to the season opener after coming off of the best year of his burgeoning career in 2012. However, the Missouri product had two on-track mishaps that knocked him out of the main event. Look for Vanderkuur to bounce back tomorrow night in round two.Final results: 1st – Johnson, 2nd – Isennock, 3rd – Poe, 4th – Wilhelm, 5th – Spencer Jr.