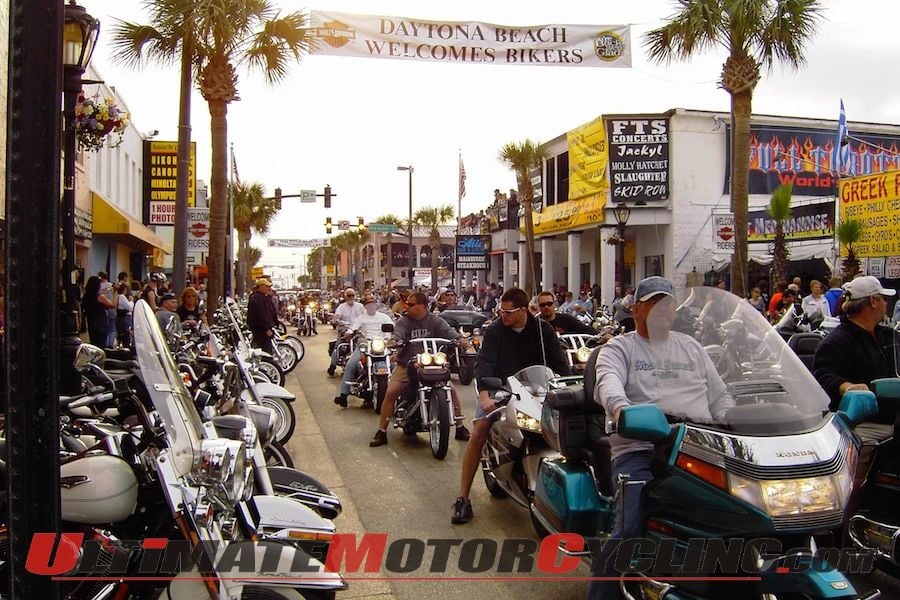 2013 Daytona Bike WeekThe Daytona Regional Chamber of Commerce has released an overview of this year’s Daytona Bike Week, which is set for March 8-17 at Daytona Beach.During the 70th anniversary of Daytona Bike Week, hundreds of thousands of bikers from all over the world are once again expected. And there are many events planned, including the Bike Week Community Appreciation Parade, the treasure hunt, and the loop for bikers to travel all over Volusia County.Following is information from the Daytona Regional Chamber of Commerce:This year’s official Bike Week sponsors include:2013 Daytona Bike Week Pocket GuideThe 2013 Official Bike Week Pocket Guide – a bikers’ survival guide for the week – will be available starting March 5th at numerous locations throughout Florida, Alabama, South Carolina and Georgia.  This free publication of 135,000 has been printed by the Daytona Beach News-Journal and includes everything bikers need to know about Bike Week:So be sure to visit the Chamber at 126 E. Orange Avenue and pick up your Official Bike Week Pocket Guide.2013 Daytona Bike Week Treasure HuntThis year’s treasure hunt includes 7 stops throughout Volusia County that are sure to strike gold. Anyone is invited to take the Bike Week Treasure Hunt Passport (found inside the 2013 Bike Week Pocket Guide) to the various locations and have the correlating coin stamped.  You must have all seven stamps from the corresponding locations to receive your official coin.Pick up your treasure from each location then bring your passport to the Bike Week Headquarters tent in Riverfront Park to receive your limited-edition commemorative coin.The Treasure Hunt stops are:2013 Daytona Bike Week Community Appreciation ParadeThe 2013 Bike Week Community Appreciation Parade will be held on Saturday, March 16, 2013 at 9AM.  An iconic event for several decades, the Bike Week Parade was absent for a few years, but is back in its second year of resurgence. This parade includes hundreds of vendors and exciting entertainment including bikes, stunts, cars, dancing, and more!All parade participants should congregate at the Ocean Center south parking lot on Saturday, March 16th beginning at 7AM, where staging for the parade will occur.  The parade will begin at 9AM and proceed from Auditorium Avenue to A1A, then west on International Speedway Boulevard approximately 5.25 miles to end at the Daytona International Speedway.To learn more about Bike Week, be sure to download the 2013 Bike Week App – a key source to survive Bike Week that provides a litany of choices of activity.  This is Bike Week – at your fingertips.  Additional information on any other aspect of Bike Week 2013 can be found on our website at officialbikeweek.com or by calling the Daytona Regional Chamber of Commerce at (386) 255-0981.Additional information on Bike Week in Daytona Beach can be found by downloading the Official Bike Week iPhone App and also on the Official Daytona Bike Week Website at officialbikeweek.com, featuring the largest online resource for attendees and designed to offer a litany of choices of activity.For information on any aspect of Bike Week 2013, contact the Daytona Regional Chamber of Commerce at 386-255-0981.