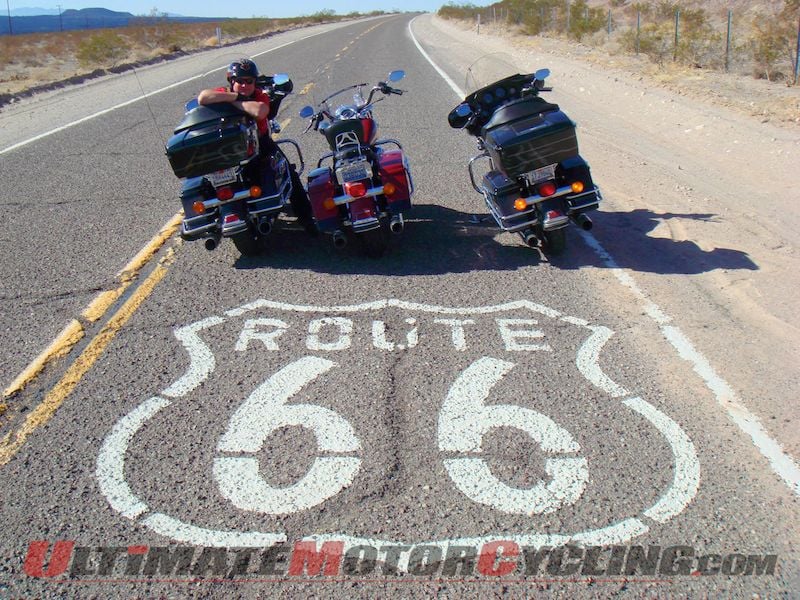 Route 66 via MotorcycleWhether you know it as the Will Rogers Highway, the Main Street of America, or the Mother Road, Route 66 is indelibly stamped in the minds of all Americans.An early part of the US Highway system, established over 85 years ago, it became the subject of a hit song by Bobby Troup and a successful television series (featuring a convertible Corvette rather than a motorcycle, unfortunately).In the intervening years, Route 66 has suffered numerous indignities, including its decommission in 1985. Still, that has not stopped the nostalgia for the route, which ran 2451 miles and eight states from Chicago to Santa Monica, and the desire to recreate the ride using existing roads.Certainly, fans of Route 66 have not let it die. The National Museum of American History in Washington, DC has a display on Route 66, and numerous local governments have retained the Route 66 name for bits of the road.Towns such as Seligman and Oatman in Arizona have made Route 66 a primary reason to exist, pushing the tourist aspect as hard as they can. No trip on Route 66 is complete without a stop at the Snow Cap Drive-In in Seligman – we recommend a malted milkshake – and a wild burro sighting in Oatman.Whether you take the entire distance in one bite or concentrate on specific parts of interest, a ride on Route 66 takes you back in time for a relaxing ride, making a cruiser or dresser an ideal riding mount.Eagle Rider, one of the premier motorcycle rental and touring companies in the world, is uniquely positioned to take you from Chicago to California on as much of the old route as possible. The 15-day guided tour not only takes in the best of Route 66, but also includes side trips to Las Vegas and the Grand Canyon, making it an unforgettable ride.This is not a tour for a casual rider, however. The longest day – from St. Louis to Joplin – clocks in at 335 miles, so make sure you pick a proper touring Harley-Davidson for the trip (we suggest either the Electra Glide or Road King).Very popular with riders from all over the world, don’t be surprised if the make-up of your Eagle Rider tour group doesn’t have a strong international flavor.Story from Ultimate MotorCycling’s Special Travel Issue