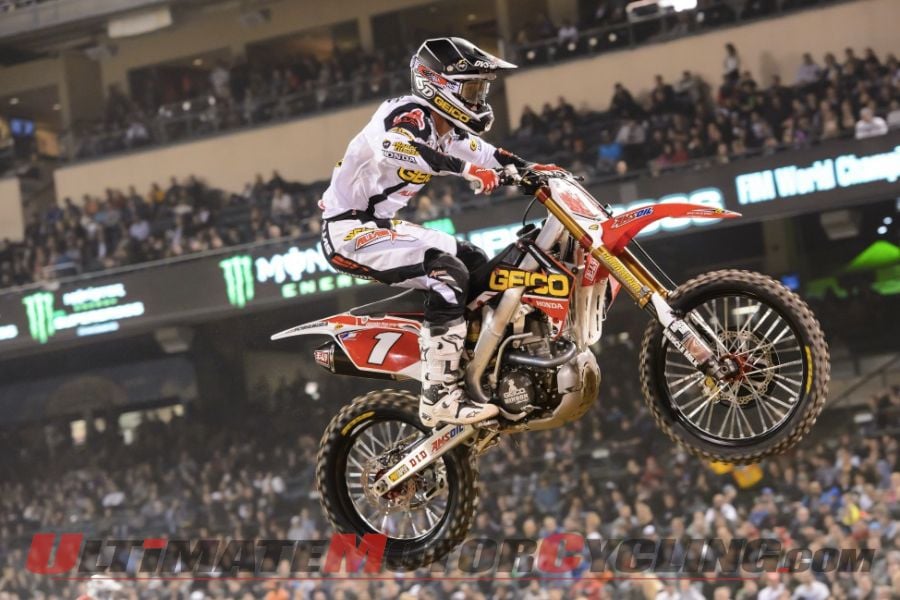 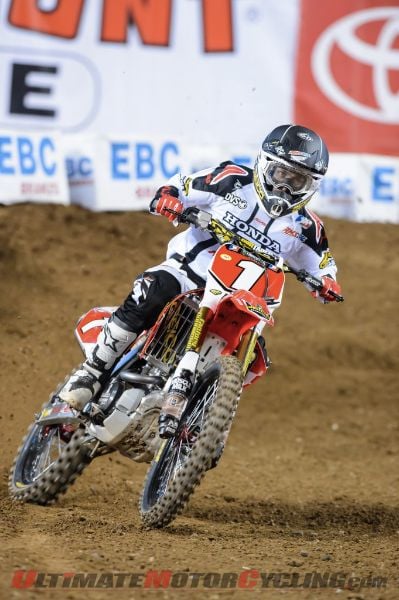 2013 Monster Energy SupercrossGEICO Honda’s Eli Tomac is hoping to open the Monster Energy AMA Supercross season with this fourth straight 250SX West victory Saturday at Overstock.com Coliseum.With two victories in Anaheim and one at Phoenix, Tomac has been able to score wins at venues where he struggled in the past. This weekend, the tables are turned and Tomac will be defending the Oakland trophy he earned in 2012.Eli Tomac says: “Oakland is a little bit different compared to the rest of our West Coast tracks. The dirt is usually a little bit softer. They get rain and moisture up there a little more often so the base is softer than a lot of the other places.“You have to adjust, but soft dirt is something I like, so it should suit me well.”So far this year, nothing has slowed Tomac, the defending West champion, who already has built a nine-point championship lead over second-place rider Ken Roczen. Tomac has faced a few challenges with his starts in the early going, but has always found a way to end up on top of the podium at the end of the night.Eli Tomac says: “My confidence is really high right now. I’ve been able to win from different positions, be it if I started up front or in the pack. Last week I was able to pass the second and third place guys in the points to take the win so that was good.“I just need to stay mistake-free and hold onto this momentum all the way to the end.”GEICO Honda’s other 250SX West rider, Zach Osborne, felt the lingering effects of a shoulder injury last Saturday but still managed to move forward in the championship standings with a strong fourth-place showing.Zach Osbourne says: “It’s been going good and I’m feeling near 100 percent now. I’ve been able to ride this week and we’ve made some improvements on the bike. My shoulder is feeling so much better than it did, so I’m really looking forward to this weekend.”Osborne said getting his health back should be the final piece that unlocks a spot on the podium.Zach Osbourne says: “I didn’t get the start I wanted last week but still ended up fourth. I would have liked to have been on the podium three times by now, but I’m happy with where I’m at considering the circumstances I’ve had to face.“When I had a good start, my shoulder was hurt. Now my fitness is there, my speed is there, the bike is dialed in better and now with my shoulder back, I should contend for a spot in the top three if not a win.”Osborne is fourth in the West standings, 11 behind Cole Seely.Recently retired 450SX rider Kevin Windham will be at the race this weekend, kicking off a farewell tour of sorts. Windham plans on attending all of the remaining races on the schedule so he can sign autographs in the pits and participate in rider introductions and perform his signature transfers for the fans one final time.Practice at Overstock.com Coliseum gets under way at 12:30 p.m. PST on Saturday. Opening ceremonies will be at 7 p.m. SPEED TV will air the 250SX race at 5 p.m. EST on Sunday with CBS affiliates showing the 450 race on Sunday afternoon. Check local listings for times.Submitted by GEIGER Media