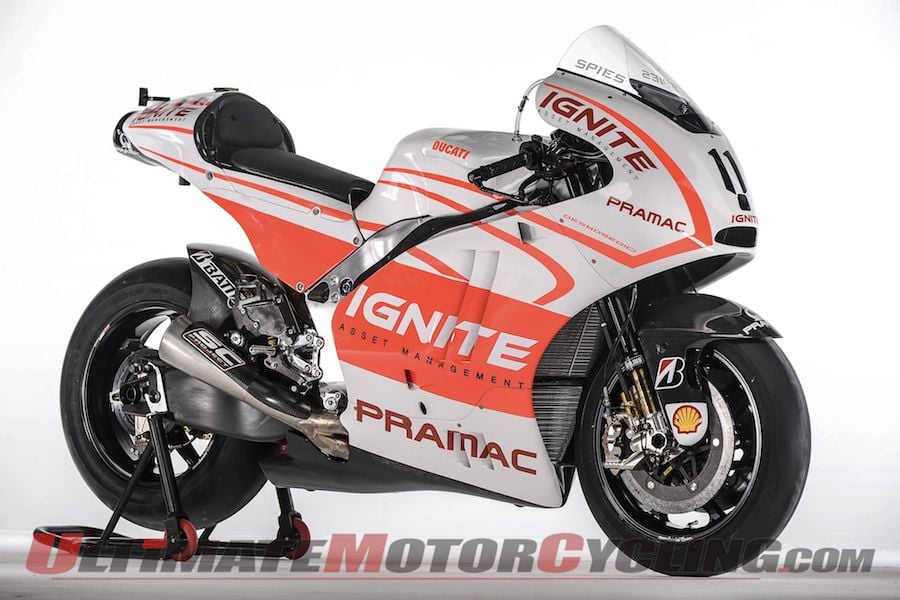 2013 Ignite Pramac Racing Ducati TeamFollowing two years on the Yamaha Factory Racing YZR-M1 next to two-time MotoGP Champion Jorge Lorenzo, the American Ben Spies signed with Ducati’s Pramac Team for the 2013 season.And on Tuesday night at Wrooom 2013, the Ignite Pramac Racing Team Ducati Desmosedici GP13 that Spies will pilot in 2013 MotoGP was unveiled. In its 23rd year, Wrooom is the traditional Press Ski Meeting at Madonna di Campiglio that symbolically launches the forthcoming MotoGP and Formula One seasons.In the past, the Pramac Team was not factory supported. But for 2013, this changes. Under the guidance of Pramac Team Principal Paolo Campinoti and Team Manager Francesco Guidotti, Pramac Racing will be key players in the development of the Ducati GP13. And one of the biggest assets to this development is Spies’ talent; the Texan is a six-time podium finisher in MotoGP, the 2009 World Superbike Champion and also a three-time AMA Superbike Champion. Spies will be teammates with Moto2 sensation Andrea Iannone.For 2013, Spies’ Pramac Racing Ducati will feature the logo of new sponsor Ignite Asset Management, a New York-based, alternative-asset-management firm led by a group of hedge-fund industry veterans and supported by private investors with a passion for motorsports. 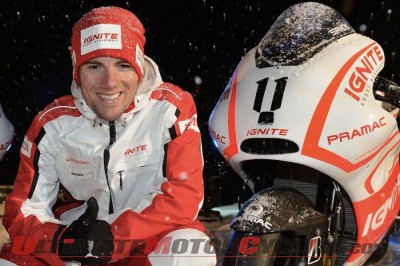 Ben Spies (Ignite Pramac Racing Team Rider) says: “I am excited to be a part of the Ducati family. This is something I’ve wanted from the beginning of my racing career. My team and I have our work cut out for us and new goals to meet, but we’ll benefit from factory support and Audi coming on board. Ducati has four strong riders with different styles, which should improve the Desmosedici and bring it back up to the top where it belongs.”Paolo Ciabatti (Ducati Corse MotoGP Project Director) says: “We’re very pleased with the agreement we’ve reached with Ignite Pramac Racing Team for 2013, which has the Francesco Guidotti-run team taking on factory-supported status, with an even closer link to Ducati’s racing department.“This is also demonstrated with the presence for the first time of Pramac Racing Team at Wrooom, the fantastic event taking place in Madonna di Campiglio. We’re very confident that Ben Spies will be able to use his talents to help us with the development of the bike and to achieve the results we’re after more quickly, and we thank the sponsor Ignite Asset Management for its support on this project.”Francesco Guidotti (Ignite Pramac Racing Team Manager) says: “Pramac Racing Team is honoured to welcome Ben Spies, who has enormous talent and a spectacular riding style. We’re expecting a big challenge, but thanks to the important support of sponsor Ignite Asset Management and our new status as a Ducati factory-supported team, we are sure we will live up to expectations. With Ben, we’ll endeavor to speed up the development process on the bike to achieve our objectives as soon as possible. We’re enthusiastically looking forward to the 2013 season.”