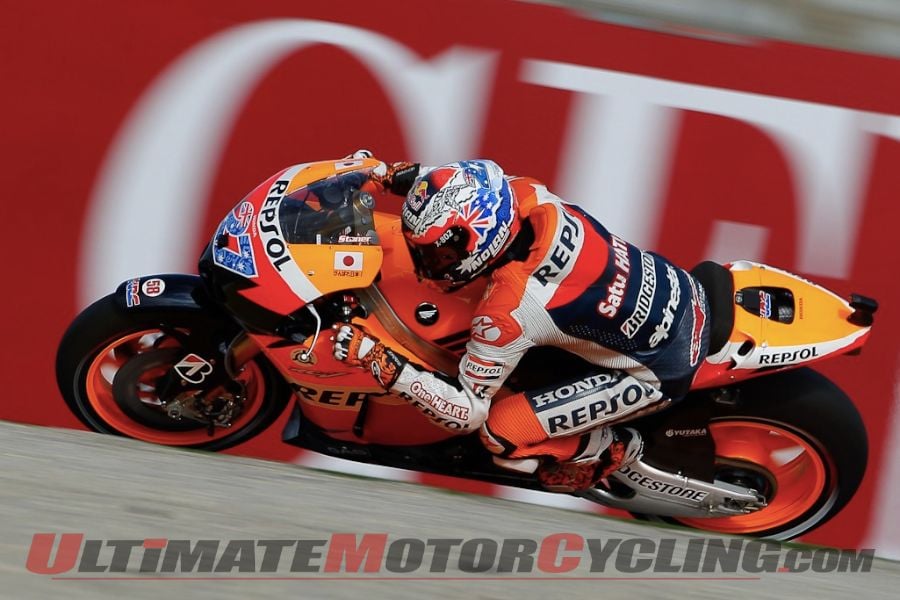 2011 MotoGP FinaleAs the 2011 MotoGP season progressed throughout 18 rounds, Casey Stoner took 12 poles, his latest arriving this afternoon at Valencia. The Australian has now matched the record poles set in a single season, Stoner joining five-time 500cc Champion Mick Doohan.And with each pole this season, Stoner usually had a significant gap over the rest of the grid. And Valencia was no different; the 2011 MotoGP Championship’s 1:31.861 was a over a second faster than the man starting second Sunday at Valencia – Stoner’s teammate Dani Pedrosa.Taking the final spot on the front row was Yamaha Factory Racing’s Ben Spies, the Texan posting a 1.196, trailing Pedrosa by 0.182 of a second.The lone Frenchman on the 2011 MotoGP grid, Randy de Puniet, carried over his quick free-practice performances into qualifying, placing the Pramac Racing Ducati on top of the second row. De Puniet missed the front row by only 0.061 of a second.Three-tenths behind De Puniet was Rizla Suzuki’s Alvaro Bauitsta, the Spaniard qualifying fifth. Taking the final second-row position was Ducati Team’s Valentino Rossi, the Italian posting a 1:33.478 aboard the GP11.1.Qualifying first on the third row was Rossi’s teammate Nicky Hayden. The Kentuckian will be joined by Repsol Honda’s Andrea Dovizioso, who crashed but walked away unharmed, and Mapfre Aspar’s Hector Barbera.As for Colin Edwards’ substitute on the Monster Tech 3 Yamaha, Josh Hayes, the American Superbike Champion qualified 16th, 4.181 of a second behind Stoner. Valencia MotoGP will be Hayes first time on a Prototype, the Mississippian completing this task at the age of 36.As for Yamaha Factory Racing Jorge Lorenzo’s substitute rider, Katsuyuki Nakasuga, the Japanese rider was qualified 15th. Nakasuga also substittuted for Lorenzo at Sepang, as the 2010 MotoGP Champion continues to recover from plastic surgery on his fingers as a result of a Motegi crash.The 2011 MotoGP grid will be back on the Valencia circuit first for a tribute lap for fallen MotoGP hero Marco Simoncelli, who perished in a lap-two crash at Sepang. The Valencia MotoGP race gets underway at 2 p.m. local time.2011 Valenica MotoGP Qualifying Results: