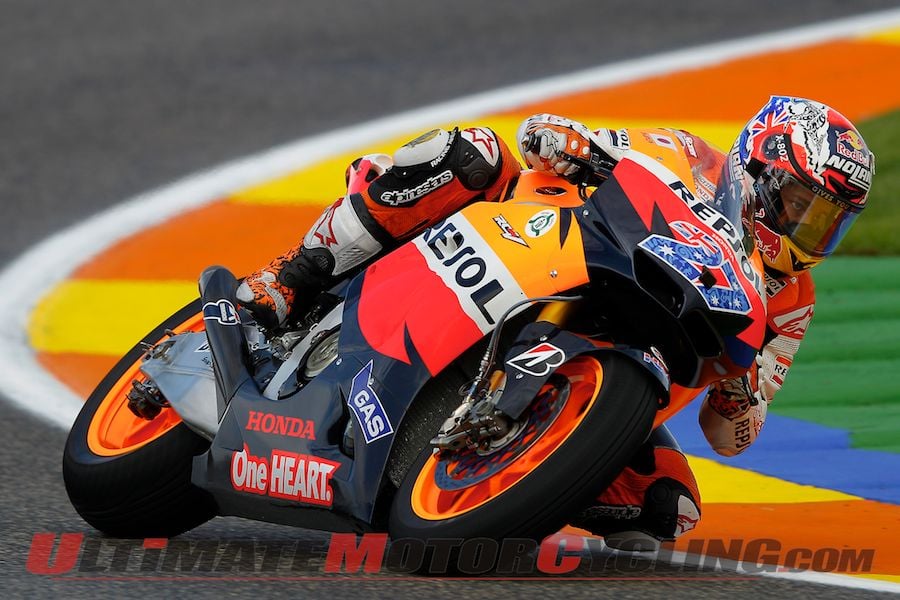 2011 MotoGP FinaleUnlike Friday’s free practice conditions, the 16-rider MotoGP grid welcomed sunshine and drying conditions during the final free practice session Saturday morning before qualifying for Valenica MotoGP.During the final free practice of the 2011 MotoGP Championship, it was this year’s champ Casey Stoner who piloted the Repsol Honda to the top time of the 45-minute session.Stoner posted a best of 1:32.619, which is over a tenth of a second off the circuit lap record set by Stoner in 2008 (Ducati). This time was also 13 seconds quicker than his best Friday practice time.Stoner would be 0.663 of a second quicker than his teammate Dani Pedrosa, with Pramac Racing Ducati’s Randy de Puniet taking the third fastest time, 1.124 seconds behind Stoner.Fourth quickest went to the third Repsol Honda rider, Andrea Dovizioso, who posted a 1:33.929. But not far back was Yamaha Factory Racing’s Ben Spies, who trailed the Italian by 0.048 of a second.Valentino Rossi piloted the Ducati Team GP11.1 to a 1:34.268, followed closely by Rizla Suzuki’s Alvaro Bautista.Rounding out the top ten were Rossi’s teammate Nicky Hayden, Mapfre Ducati’s Hector Barbera and San Carlo Honda Gresini’s Hiroshi Aoyama.The grid will be back on the Valencia circuit for qualifying; stay clicked to UltimateMotorCycling.com.2011 Valencia MotoGP: Free Practice 3 Results