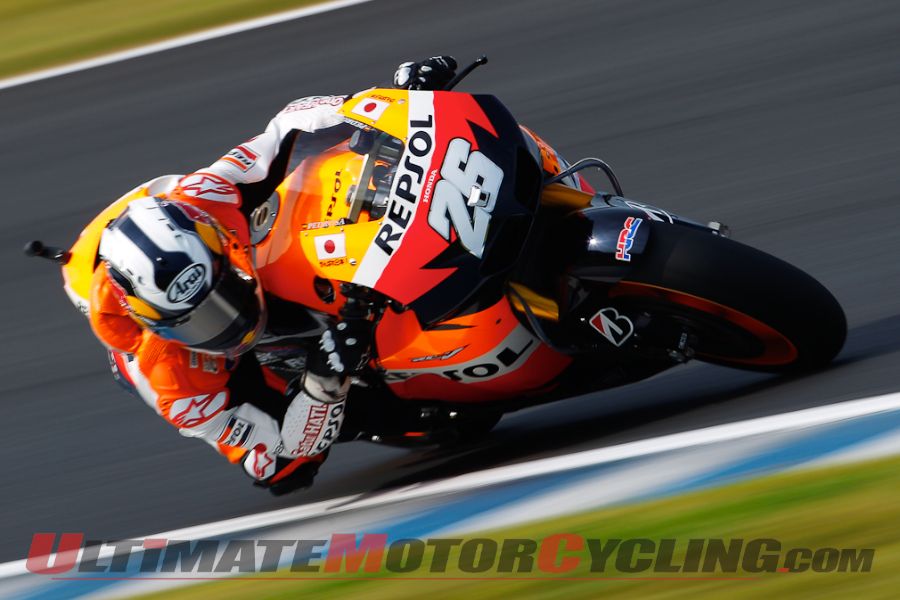 2011 MotoGPAs the 2011 MotoGP Championship began its first day of practices at Twin Ring Motegi in Japan Friday, the Repsol Honda RC212V continued its domination.After both free practices wrapped Friday, the Repsol Honda riders took the top three times. But it wasn’t the usual Casey Stoner who had the quickest time; the Australian, who won eight races in 14 rounds, was beat by his MotoGP teammate Dani Pedrosa.The Spaniard Pedrosa posted a best lap of 1:46.790, which became the new fastest lap at Motegi, and also three-tenths of a second quicker than Stoner’s lap record set in 2008 while competing on the Ducati.But Stoner wasn’t far behind Pedrosa, the current points leader trailing Pedrosa by just 0.054 of a second. The third Repsol Honda MotoGP rider, the Italian Andrea Dovizioso, was 0.162 of a second behind Pedrosa.Another Honda held the fourth overall fastest time Friday – the San Carlo Honda Gresini RC212V piloted by the Italian Marco Simoncelli.Simoncelli led for a bit in the beginning of the second free practice, but ended up finishing 0.236 behind his MotoGP rival Dovizioso.Fifth fastest was the man who trails Stoner by 44 points in the 2011 MotoGP Championship, Yamaha Factory Racing’s Jorge Lorenzo. The reigning MotoGP Champion was able to improve on his morning session time by six-tenths of a second, but will be searching for more stability aboard the Yamaha M1 during Saturday’s FP3.Lorenzo’s teammate, meanwhile, finished 12th overall Friday; the American reportedly suffered from food poisoning en-route to Japan, and hasn’t fully recovered.The quickest Ducati Friday was the GP11.1 piloted by the Nicky Hayden. The American was 0.591 of a second slower than Pedrosa. Hayden was followed by San Carlo Honda Gresini’s Hiroshi Aoyama, who was the final rider to post within a second of Pedrosa.Rounding out the top 10 quickest times on Friday were Ducati Team’s Valentino Rossi, Mapfre Ducati’s Hector Barbera and Monster Tech 3 Yamaha’s Colin Edwards.The 19-rider Motegi MotoGP grid (two additional wildcard riders, Shinichi Ito and Kousuke Akiyoshi) will be back on the Japanese circuit Saturday for the final free practice ahead of qualifying.2011 Motegi MotoGP: Overall Friday Free Practice Results