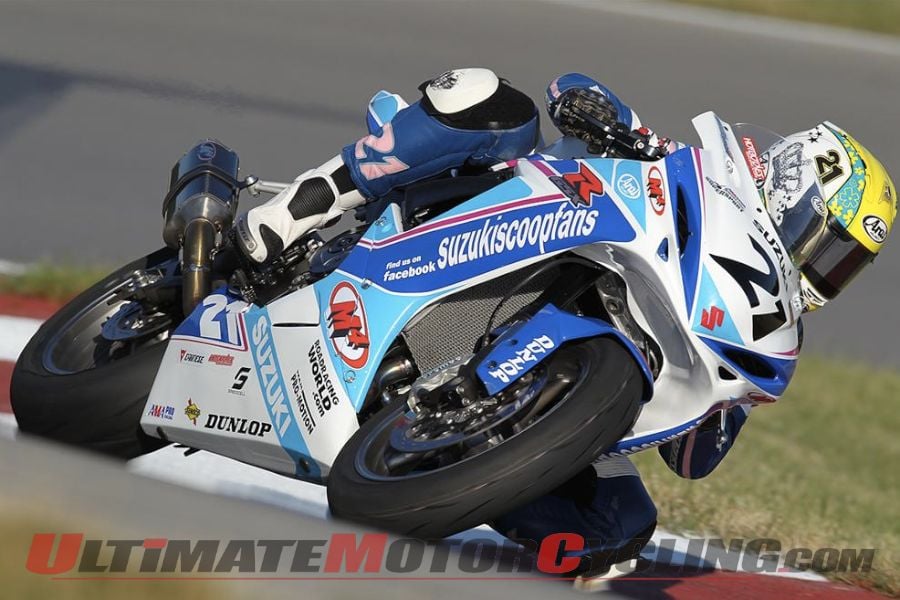 Suzuki GSX-R 600 SuperSportTeam Suzuki ScoopFans rider Elena Myers celebrated a strong showing in the AMA Pro SuperSport race at Mid-Ohio Sports Car Course in Lexington, Ohio, this past weekend. Coming off of her first podium of the year at the last AMA SuperSport round at Barber, the 17-year-old picked up fifth and sixth-placed finishes. The races at Mid-Ohio were East Division rounds and did not affect Myers’ overall championship points standings. Although she’s contesting all the SuperSport rounds, she’s only officially campaigning the West Division, where she remains in fifth place overall. In Saturday’s race, Myers got a good launch off the line on her Team Suzuki ScoopFans Suzuki GSX-R600 and when the dust had settled, she’d slotted into fifth place. She stayed put for almost all 17 laps but got passed on the last lap to take home a sixth. Elena Myers (Team Suzuki Scoopfans GSX-R600 SuperSport) says: "Overall this weekend went pretty well. It started out decent, though I wasn’t happy with how I qualified. The Suzuki ScoopFans Suzuki GSX-R600 was working great and I did some pretty good times in practice, but I wound up qualifying on the third row. Even so, I got a good start on Saturday and was right there battling for fifth. But a guy got by me at the end and I ended up sixth." On Sunday, Myers again got a good start and found herself running in sixth position. She rode a smart, consistent race and didn’t take any chances that might affect her points standings in the West Division. The result was a solid top-five finish. Elena Myers says: "I was again battling right there with the top guys on Sunday. And I ended up doing similar lap times as the guys who won, so I’m pretty happy with that. I lost touch a little bit at the end of the race and ended up fifth. But I’m looking to improve on my qualifying and not lagging back towards the end of the race. "We’ve got Laguna Seca in two weeks and that’s one of my home tracks. I love that place and I love the whole atmosphere of the GP Weekend. So I’m looking forward to some great racing and hopefully I can get a win." The 2011 Suzuki ScoopFans team’s next event of the 2011 AMA Pro SuperSport season will be at Laguna Seca Raceway in Monterey, California on July 22 – 24.