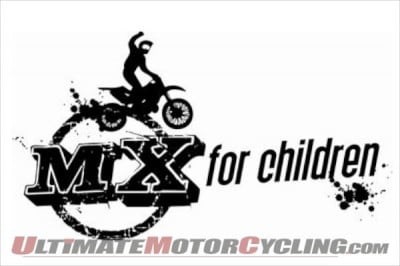 2011 AMA Supercross Fundraiser MX for Children has reported that its Inside Line Experience fundraiser exceeded $37,000 for children’s hospitals throughout the 2011 Monster Energy AMA Supercross, an FIM World Championship, season.The Jackpot Challenge, which rewarded the top fundraising performer with two VIP passes to the Monster Energy Supercross finale at Las Vegas’ Sam Boyd Stadium, was won by Marc Fantich of McAllen, Texas.Fantich, who raised more than $7,000 by taking pledges for driving his Harley Davidson motorcycle from his home in Texas to Seattle, Wash., refused to accept his prize and awarded it to two deserving children from Houston, Texas who participated in raising money for hydrocephalus through MX for Children.Marc Fantich (CEO of Fantich Media Group) says: “I did this ride because MX for Children is a great cause. My brother and our friend Robert, who supported me on this ride, already have my tickets to Las Vegas, so the trip should go to those two young kids from Houston who raised all that money doing bake sales!”Jackie Anthis, mother of Sean and Ryan who raised more than $3,400 was speechless when she heard that they had won.Jackie Antis says: “I am so proud of Ryan and Sean for all the hard work they have put into their fundraising efforts. This is their third year raising money for hydrocephalus through MX for Children, and they continue to surprise me each and every time.”The second place winner, Greg Pinch of Toronto, Canada will receive a $500 gift certificate to the Motorcycle Superstore. And the third place winner, Scott Whittington of Toronto, Canada won a Microsoft Xbox 360 with Kinect Hardware. Both of these winners participated in the Inside Line Experience at the Toronto Monster Energy Supercross race on March 26.The MX for Children Jackpot Challenge created an opportunity for anyone in North America to raise funds for MX for Children, which resulted in participants from Southern California to Toronto, Canada.Paul Gross (MX for Children founder) says: “We are overwhelmed with the success of the Jackpot Challenge. Not only did this opportunity allow us to raise more money for our network of children’s hospitals, but also give people a taste of what our program does and some momentum to build on in the future.”MX for Children Jackpot Challenge raised funds for the Hydrocephalus Association, a 501(c)(3), which distributes the donations to the following children’s hospitals: Birmingham’s Children’s Hospital of Alabama, Houston’s Texas Children’s, Pittsburgh’s Children’s Hospital, Salt Lake City’s Primary Children’s, Seattle Children’s, St. Louis Children’s, and Toronto’s SickKids Hospital. The funds go to support the hospitals’ research to improve the brain condition hydrocephalus – the #1 cause of brain surgery for children.Donations are still being accepted for the Jackpot Challenge at mxforchildren.kintera.org.

About MX for Children
MX for Children has raised more than $500,000 for children’s hospitals in North American since it was founded in 2006. Fundraisers are motivated to help children by advancing research for hydrocephalus — the #1 cause of brain surgery for kids. MX for Children supported hospitals, recognized as some of the world’s foremost pediatric health-care institutions, are dedicated to advancing children’s health through the integration of patient care, research, and education in several cities on the Supercross circuit. For more information, visit mxforchildren.org or contact MX for Children at info@mxforchildren.org.