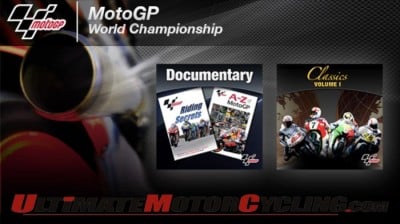 MotoGP on iTunesMotoGP has been publishing content on iTunes since 2006 when it launched the free After the Flag program and Official Podcasts. Dorna Sports has increased its offerings with new programmes now available at the iTunes video store, such as Race Highlights, Documentaries and MotoGP Classics.This content can be accessed through any iTunes compatible device, such as the iPad, iPhone, iPod and any computer.The MotoGP Classics section features a classic premier class race from each season starting in 1992 up to and including the 2008 Championship, reliving such epic moments as the famous Rainey vs. Doohan battle from Catalunya 1992, Rossi vs. Gibernau from Jerez 2005, or Rossi’s sensational victory on his Yamaha debut in Welkom 2004. All the races have been specially re-mastered for optimum quality.Also on offer are Highlights from every race in 2010, with the ones for 2011 being made available after each race. The opening round of the season at Qatar is already on offer, following a thrilling first race which saw Casey Stoner hold off reigning World Champion Jorge Lorenzo and team-mate Dani Pedrosa for a winning start to the year. Each 52min programme will also be available in High Definition.The Documentaries soon to be available through iTunes are “A-Z of MotoGP,” a program looking at the riders and factories who have contributed to the glorious history of the championship, as well as the low-down on the latest rules, regulations and racing techniques and technology, “MotoGP Riding Secrets” and “Jorge” a journey with the 2010 World Champion to his greatest sporting moment. “Jorge” is also available in HD.MotoGP Classics, the first of its new iTunes content, was launched on March 7 in five territories; UK, Australia, Germany, France and Canada. This was followed in the lead up to the 2011 season with MotoGP Documentaries and 2010 Highlights, prior to the availability of the 2011 Highlights in HD themselves.The MotoGP classics, Documentaries and Race Highlights can be purchased from as little as £1.89/€2.49 ($3/4) for each program.