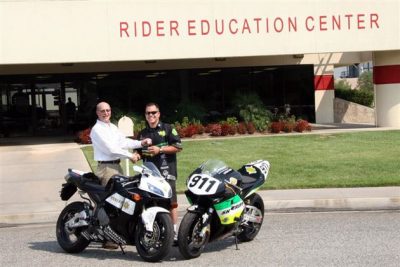 Started in 1994 in Los Angeles, Team Sheriff Racing educates the public—especially youths—about the dangers of drugs, gangs, impaired driving, and illegal street racing. The program’s success has led to the creation of a division that deals directly with the perils of racing motorcycles in canyons and on the street.Deputy Michael Churney heads up Beat The Heat, a series of track days designed to encourage motorcyclists to push their bikes’ limits on the track instead of on public roads. The unique program enables the staff of Team Sheriff Racing and deputy sheriffs to interact with participants in the controlled racetrack environment. Instead of regarding each other as adversaries, riders and law enforcement can enjoy a friendly day at the track in a ticket-free environment.