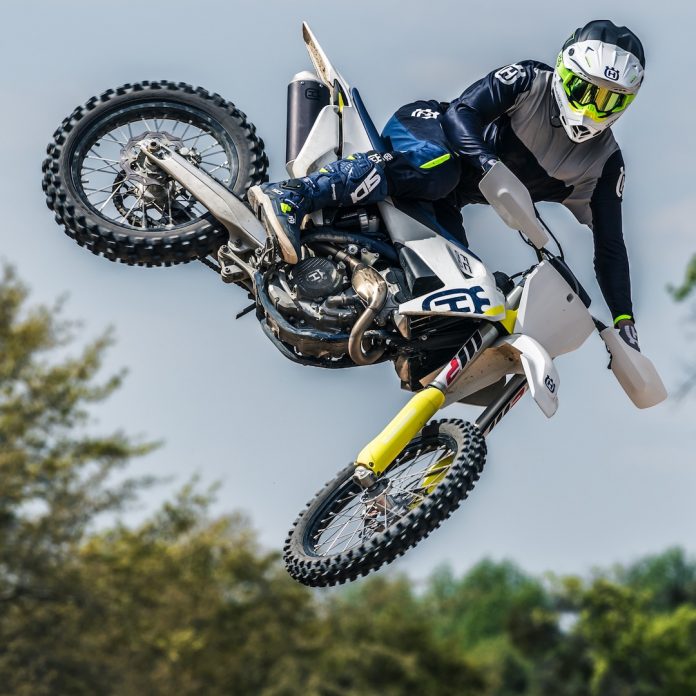 Coming off Supercross championship-winning seasons by Jason Anderson and Zach Osborne, the 2019 Husqvarna FC 450, FC 350, and FC 250 four-strokes get major updates for 2019.Most of the changes are for all three motocross motorcycles, and there are a few model specific changes worth checking out. 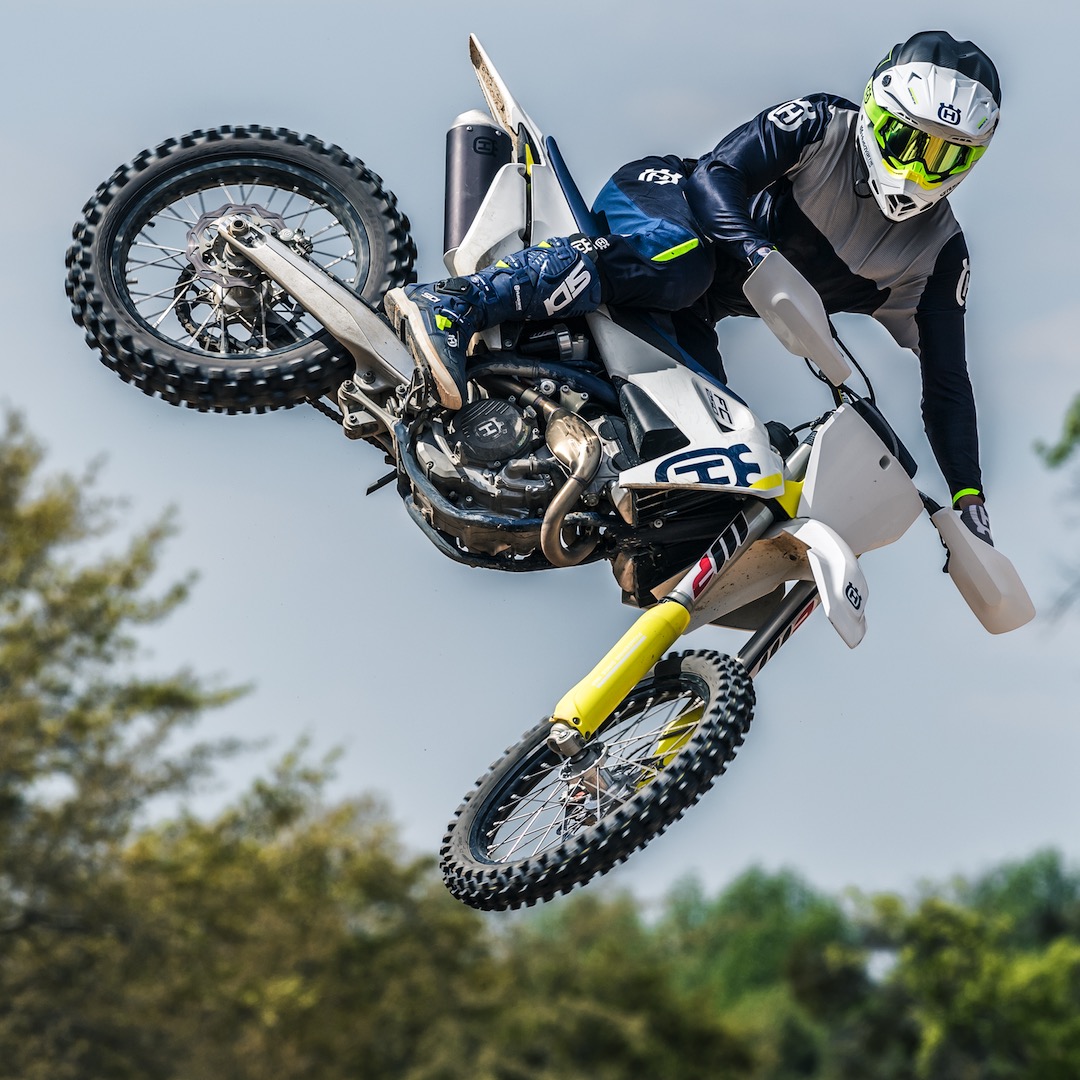 1. The 2019 Husqvarna motocrossers get a new frame. With the triple stated goals of “improved rider feedback, energy absorption, and stability,” the hydro-formed laser-cut robot-welded frame gets more rigidity this year. Sections have been redesigned, and the head-stay mounts have been changed. Also, there are now mounting brackets for an optional skidplate.2. The polyamide/carbon-fiber subframe is also new for the 2019 Husky MXers. A two-piece design replaces the old three-piece subframe, and drops nearly nine ounces in the process. Vertical stiffness has been increased by a claimed 30 percent to complement the stiffer main chassis.3. Up front, the triple clamp is also stiffer. This falls in line with the frame and triple clamp, and the increased stiffness comes from reshaping the CNC-machined unit. As before, the triple clamp has a rubber damping system to reduce rider fatigue.4. Bolted to the new triple clamp is a ProTaper handlebar with a new bend. Husqvarna tells us that the new bend is easier on the hands. 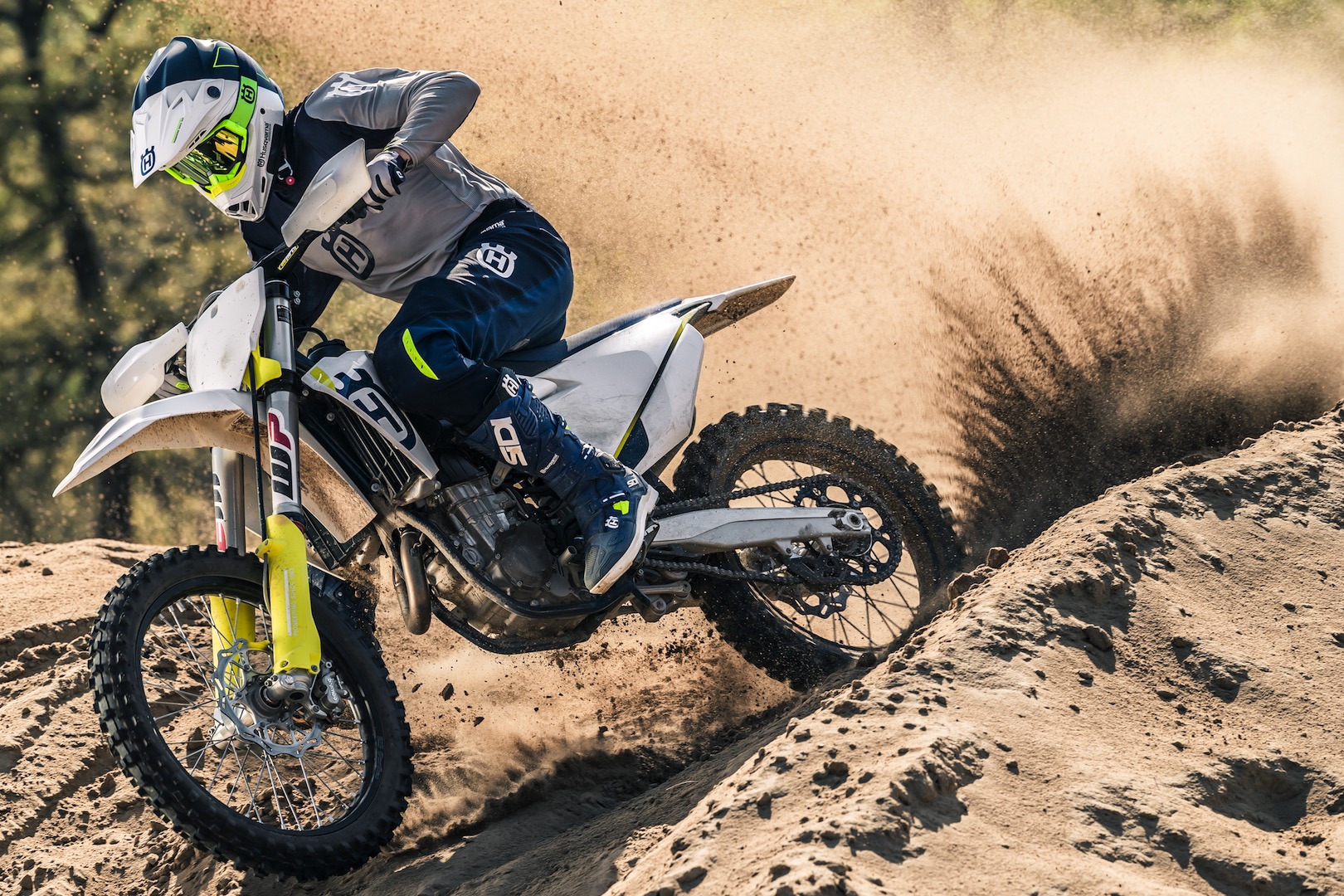 5. With a stiffer frame, subframe, and triple clamp comes new settings for the WP AER 84 fork. Husqvarna claims “improved damping and performance” from the update settings for the air fork.6. The WP DCC shock gets a new main piston and settings. Again, this is about adjusting the suspension components to the stiffening of the frame.7. The 2019 Husqvarna four-stroke motocrossers get updated launch control and traction control setting. Efforts have been made to increase traction on slick tracks using both electronic control features.8. There are new exhausts on the 2019 Husky MX bikes. The redesigned exhaust system gets an integrated resonance chamber, easier removal allows the shock to stay in place, and a shorter muffler. The aluminum exhaust system also gets a new anodized coating.9. Pankl now produces the gearboxes. This isn’t a surprise, as the same consortium that owns KTM also owns Pankl Racing Systems.10. The cooling system has been redesigned. Husqvarna has lowered the mounting position nearly a half-inch to lower the center of gravity of the motorcycles. The radiator protectors have double duty—improved redirection of roost from the radiators, as well as bracing the radiators. Further, there’s a larger center tube flowing coolant through the frame. This reduces pressure in the system, and makes the flow of coolant more consistent. 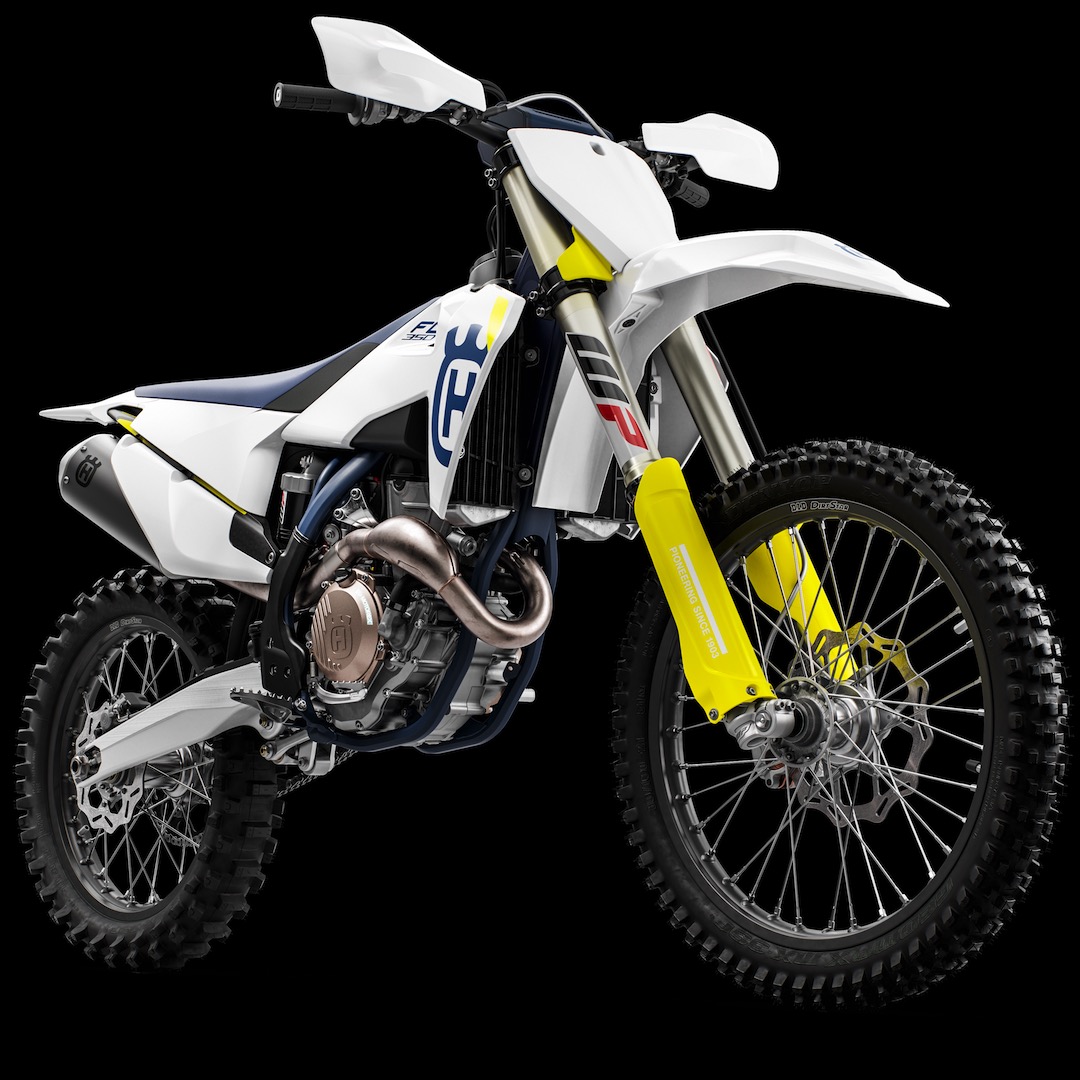 11. The bodywork has been updated to make it easier to move around on the motorcycle. Husqvarna calls it “Swedish-inspired” and the contact points are slimmer and seamless for easier rider repositioning.12. The 2019 Husqvarna FC 450 gets a new cylinder head. The SOHC top end is now nearly 18 ounces lighter and over a half-inch shorter. Husky also claims improved bottom end power and throttle response due to shorter valve timing from the new camshaft.13. The 2019 Husqvarna FC 350 and FC 250 get the diaphragm steel clutch already used on the FC 450. The design eliminates coil springs and saves nearly seven ounces, and Husky claims increased durability.14. The 2019 Husqvarna FC 250 gets new exhaust cam timing. Husky claims “improved power delivery.” 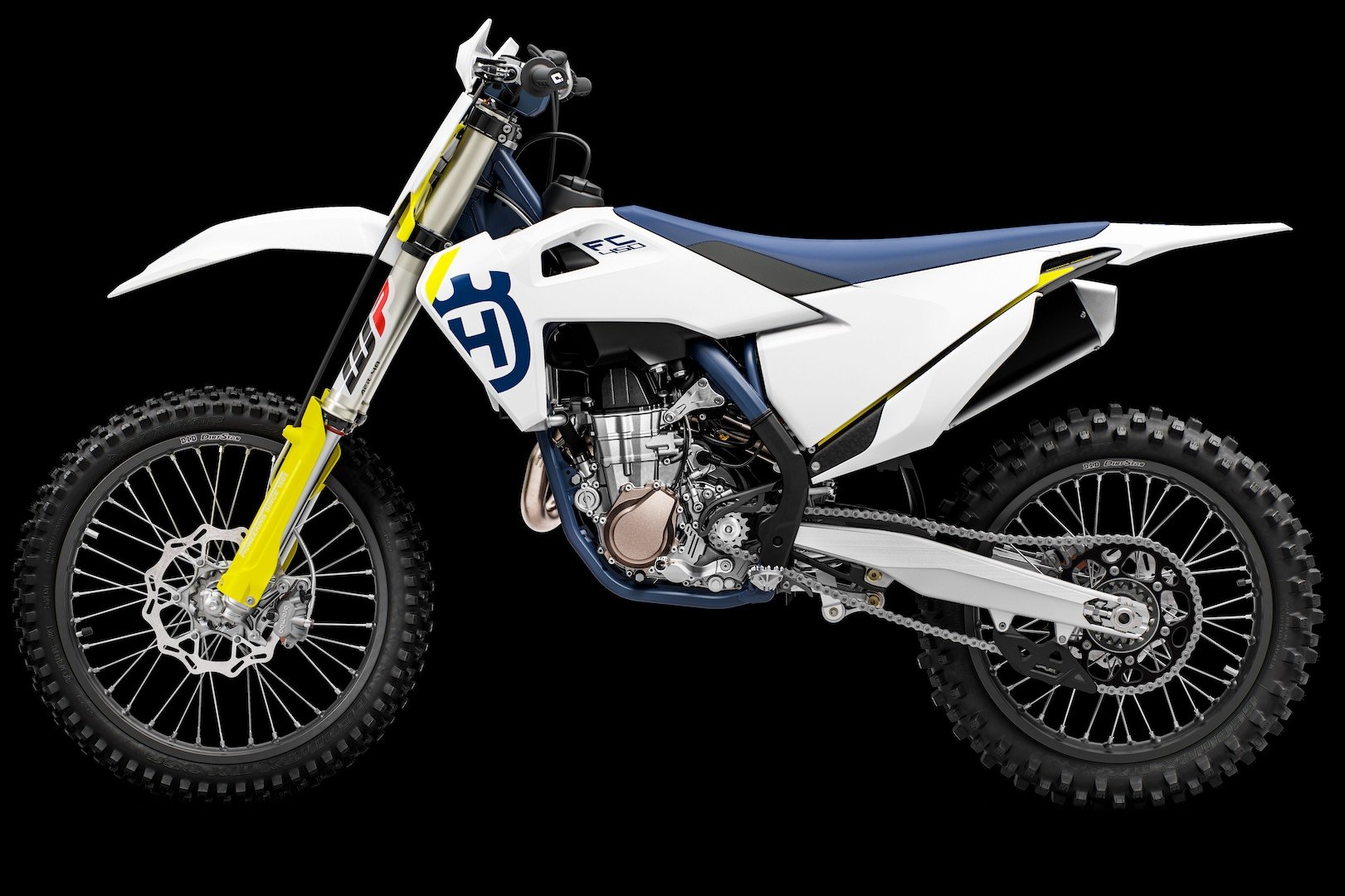 15. A new lighter cylinder head is used on the 2019 Husqvarna FC 350. The casing has been changed, and that saves just over seven ounces.16. Plenty of details have been improved for 2019. The new li-ion battery is lighter and more powerful. There are new lower-maintenance spoke nipples. The throttle cable has been rerouted for easier removal. The external fuel line has been tucked in to prevent damage. There is a new seat profile that Husky says offers “superior comfort and control in all situations.”Studio photography by KiskaAction photography by Rudi Schedl