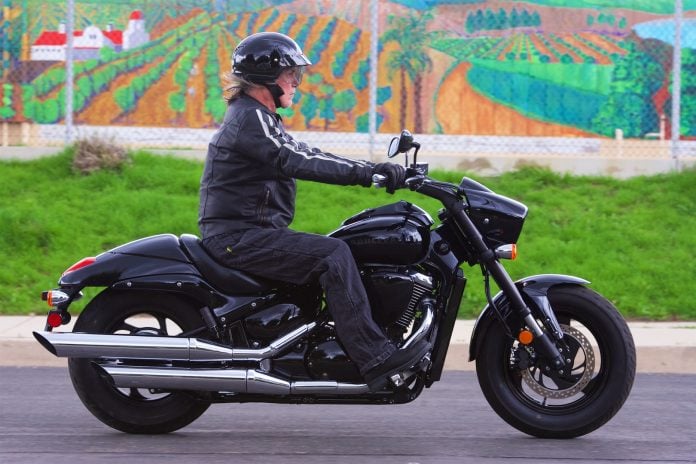 Although Suzuki’s Boulevard cruiser line tends to fly under the radar, it does have eight models in its 2018 lineup. The M line is the performance line among the Boulevards, with the legendary M109R at the top, the M90 in the middle, and the M50 providing lightweight action.The 2018 Suzuki Boulevard M50 has roots in the mid-1990s Marauder 800, though it enjoyed a significant redesign in 2010. 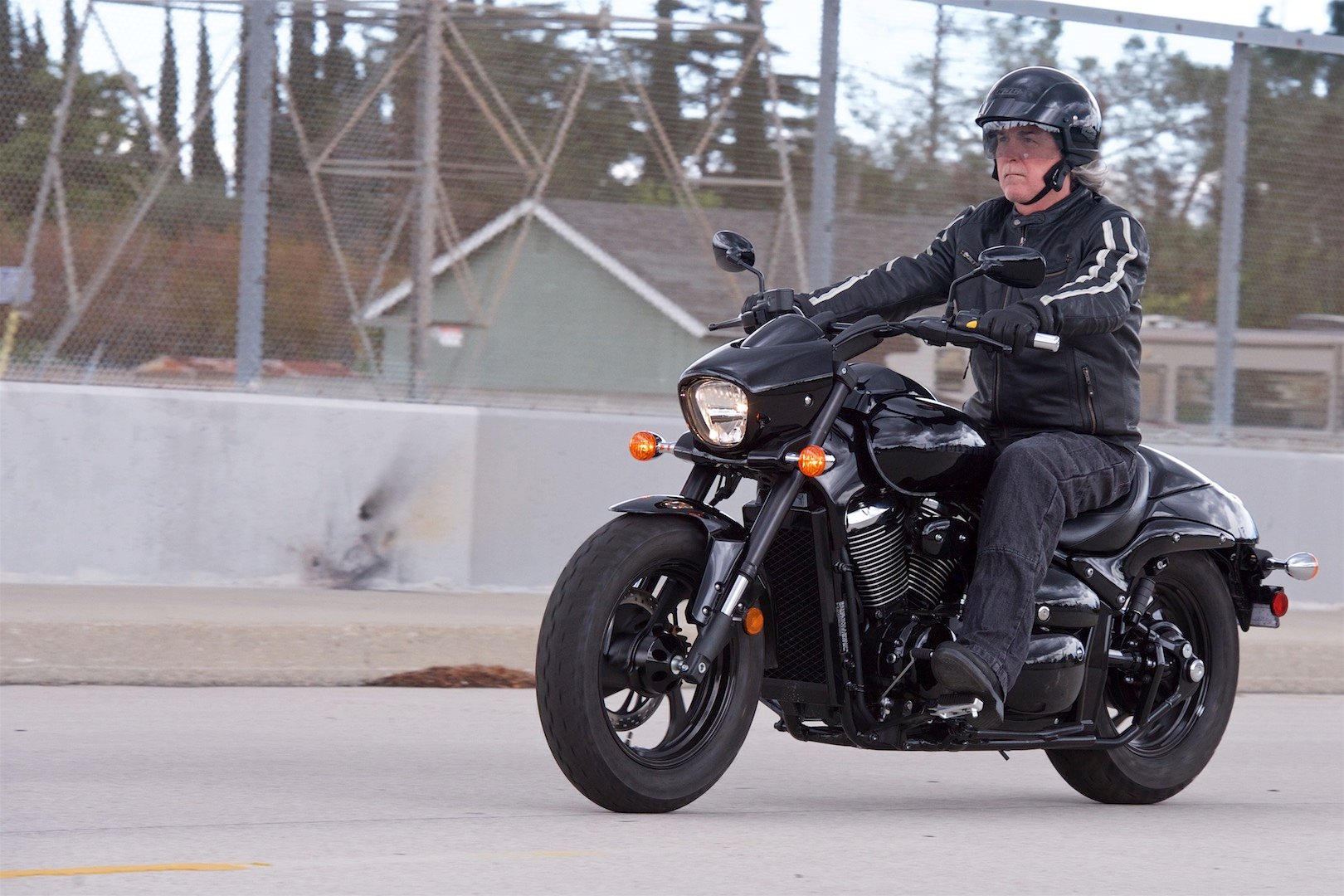 The M50 is a small-displacement modern power cruiser, and a brother to the retro-styled C50 and the tour-ready C50T. With a short-stroke liquid-cooled motor, the M50 has more performance that you might expect from an 805cc cruiser.Many cruisers in this displacement range are a bit iffy on the freeway. With the headlight cowling, dished seat, and pulled back drag bars, the Suzuki Boulevard M50 overcomes the forward foot controls to work quite well at highway speeds.The motor welcomes the application of revs—there’s no tach—and will take you well above the in-town freeway speed limits without protest. The seating position works, and you don’t feel like you’re hanging on to dear life as you pass the slower four-wheel bound folks.Around town, the 2018 Suzuki Boulevard M50 acquits itself nicely. It has plenty of power for slipping its 593 pounds through traffic and away from stoplights. The five-speed transmission is well matched to the power delivery, and you never feel like you’re between ratios.The peppy motor is non-offensive. The sound is subdued through a pair of long mufflers, while the water-cooled engine refrains from producing any odd mechanical noises. Still, there’s enough power there to have plenty of fun, without intimidating less-experienced riders who are moving up from entry-level motorcycles.

The seat height of 27.6 inches isn’t especially low, though it will be comforting for the vast majority of potential M50 buyers. The center of gravity is low, so managing the M50 at walking speeds isn’t much of a challenge. Once underway, the weight disappears beneath you.Lane splitting is an easy job with the drag bars. The useful mirrors can get in the way now and then, but their height seems to avoid most cars, SUVs, and minivans.The non-adjustable suspension (save spring-preload on the shock) on the 2018 Suzuki Boulevard M50 is more than adequate. Although it isn’t plush, the linkage shock and inverted fork do the job of taking the edge off of the potholes and other obstacles urban roads can throw in your way. The IRC tires are fairly high profile, and they help keep jolts at bay.It may be a city cruiser at heart, but don’t let that stop you from taking a spin out in the canyons on the M50. The handling is nicely neutral and intuitive, while the cornering clearance isn’t unduly restricting despite the 16-/15-inch wheel pairing. We haven’t run across IRC Grand High Speed GS-23 tires before, yet they get the job done and aren’t cheap. They stick well all the way to the peg feelers touching down. If you feel the need for more (or less) expensive rubber, there are plenty of choices out there thanks to the standard sizing. 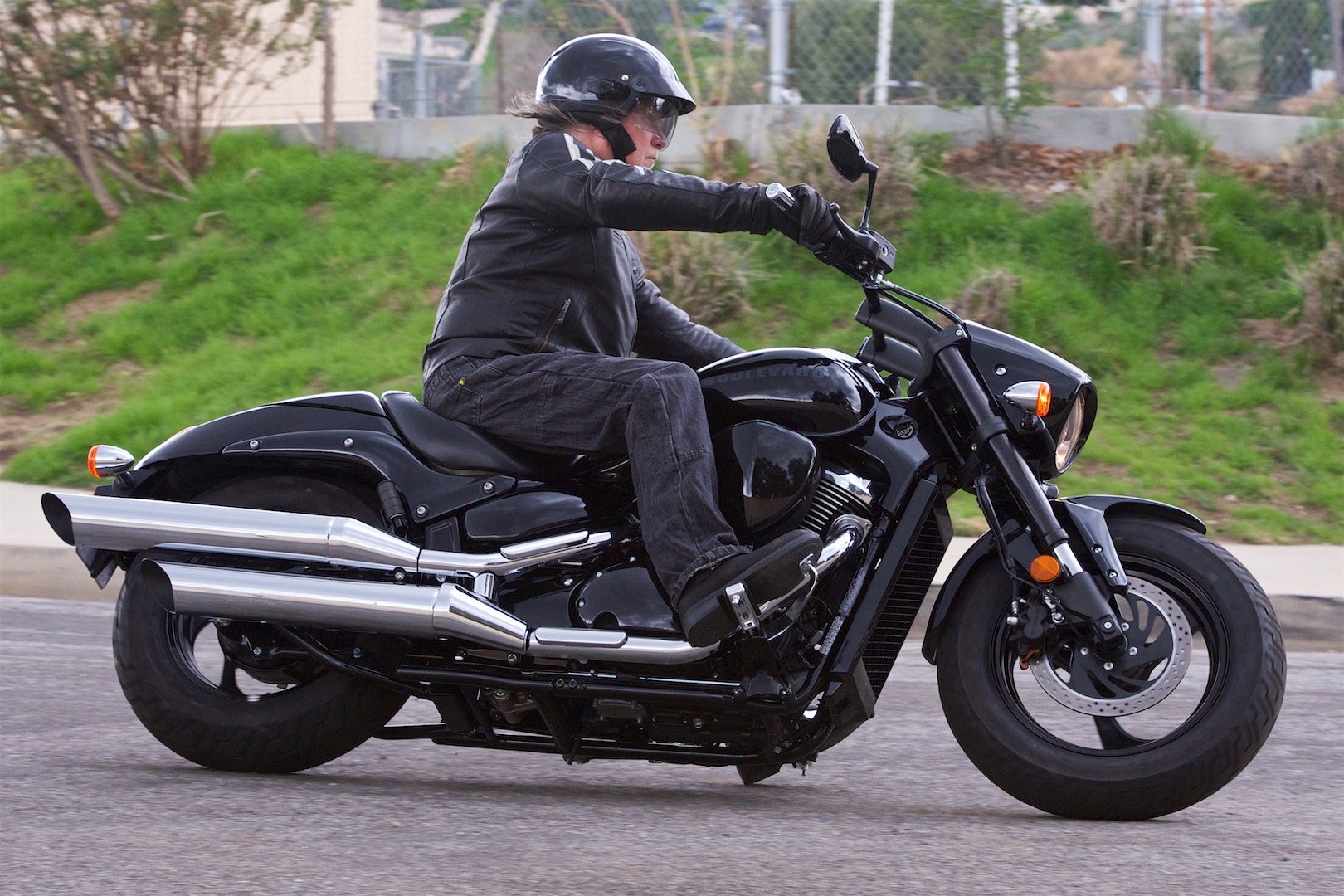 Braking is oriented toward the more sedate rider. There is no ABS, and just a single disc in the front and a drum in the rear. Regardless, feel is good at both ends, and the deceleration will be more than enough for the M50’s target audience.The 4.1-gallon fuel tank has an impressive range, so you can go out in the hinterlands without worrying about a gas station every 100 miles. Additionally, the seat and ergonomics work for all-day rides.We put the cowling on the back of the seat, as it gives the M50 a much more purposeful performance appearance. However, that requires removal of the passenger seat. We only tested the M50 solo, and would probably get the more powerful M90 if we were going to ride two-up often.All the controls work well and as expected. The front brake lever is adjustable, but the mechanical clutch lever is fixed.I’m not a big fan of the split dash. On the triple clamps, you see the speed and fuel level, which is right in your field of view. However, you get used to looking there and forget that the turn signal indicators and neutral light are down on the tank. Don’t ask how many times an accompanying rider had to remind me to turn off my blinker. 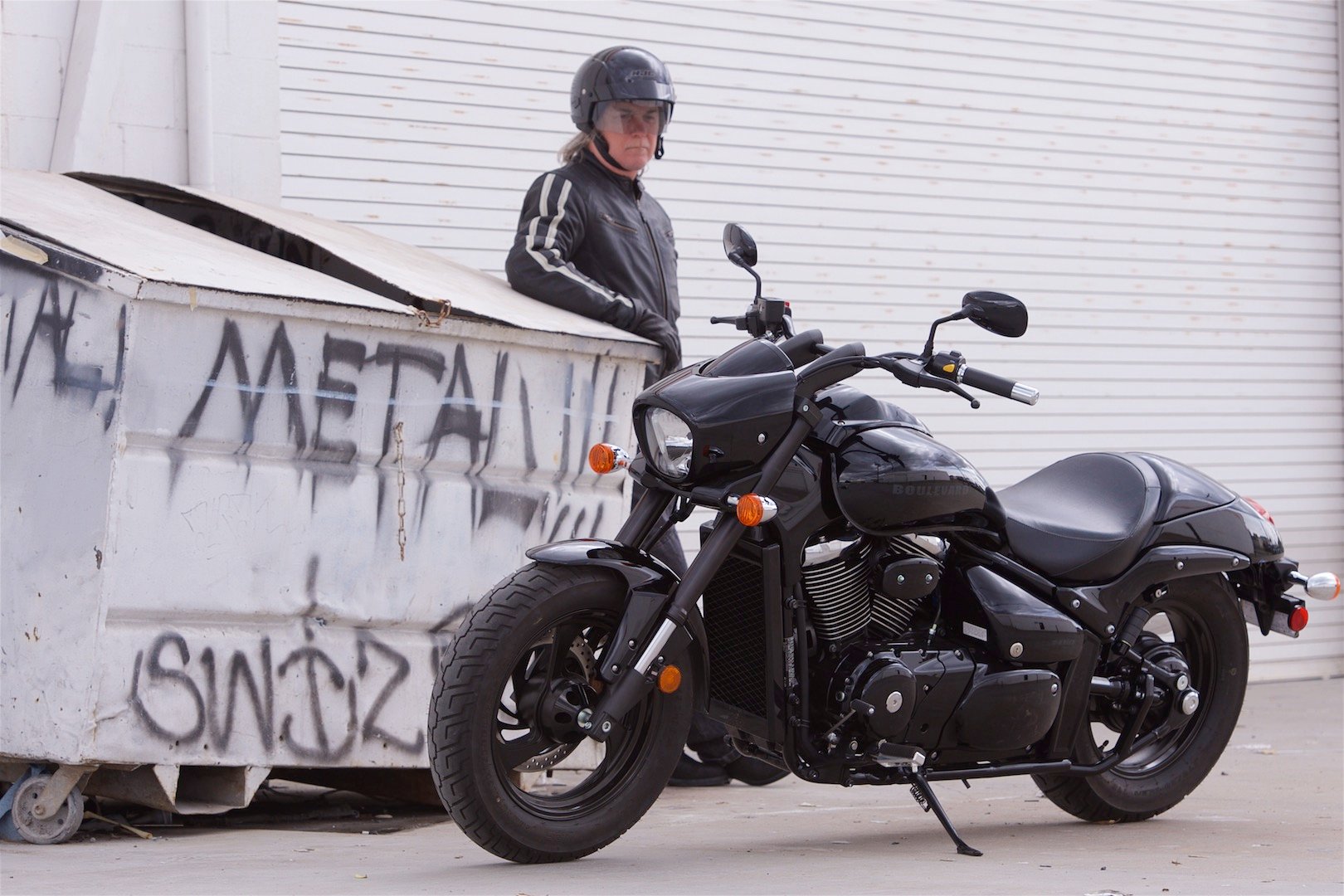 The Suzuki Boulevard M50 isn’t going to turn many heads with its Glass Sparkle Black paint job (there are no color options). Yet, no one is going to turn a nose up at the authentic modern pro-street styling once they notice the motorcycle. While it only has an 805cc V-twin, the M50 looks more substantial to passers by. The single shock and shaft drive don’t detract from the look.There are a lot of Hondas and Harley-Davidsons in this displacement range—higher- and lower-priced. The 2018 Suzuki Boulevard M50 gives a rider a chance to stand out a bit from the crowd, and do it on a comfortable motorcycle that has good power, nice handling, and established reliability.Photography by Kelly CallanRiding Style