Even if you are a very well-informed, long-time fan of the Indian Motorcycle brand, there is a chapter in the company’s history—well, several chapters—you may not be aware of, unless you already have a copy of Franklin’s Indians Irish Motorcycle Racer Charles Franklin, Designer of the Indian Scout & Chief.Long before Indian Motorcycle became one of the most recognizable in the industry, it was a company just emerging in its infancy around the turn of the last century.Like all those in the motorcycle enterprise, the company had much to learn about motorcycle design. Fortunately for Indian, it attracted the talents of the remarkable Irishman, Charles B. Franklin. 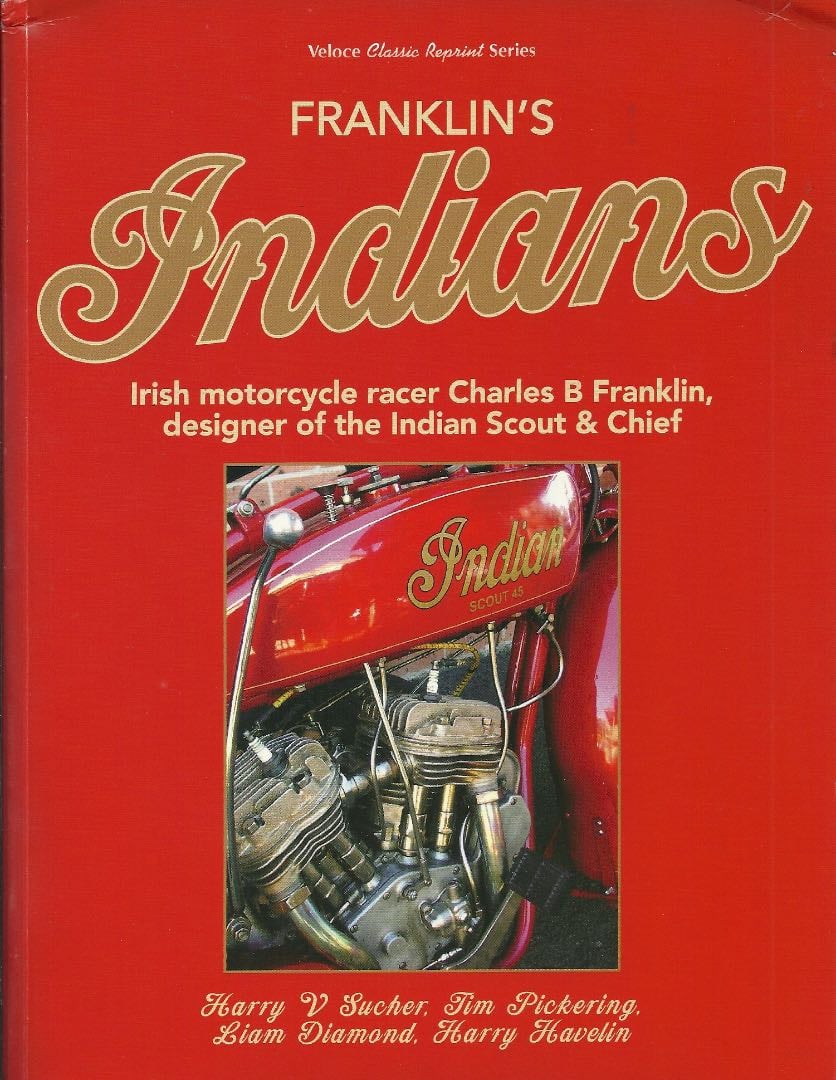 The latest addition to the Veloce Classic Reprint collection recalls the earliest history of the Indian brand in detail seldom seen. Its focus is on the contributions of Charles Franklin to the development of Indian motorcycles and their early success on the street and on the track.Franklin’s contributions ranged over side-valve combustion chamber design improvements, double loop full-cradle chassis design, helical gear primary drive, contribution to the development of the Indian eight-valve racing engines and many more.Franklin left what would have been considered a very solid civil service job in Dublin with Rathmines Electricity Works in 1910 to become the representative for Hendee Manufacturing in Ireland. Hendee Manufacturing was the parent company manufacturing Indian motorcycles, or as Indian called them then, “motocycles.”The move gave him much greater freedom to compete in motorcycle racing and promoting the Indian brand, both of which he did with great success. By 1911, Indian bikes, now equipped with a then-new “free engine” clutch and two-speed countershaft transmission became a dominant brand in competition at Brooklands and in the Isle of Man TT. Franklin was the rider in many of the premier events of the day.Franklin was among early motorcycle racing luminaries such as Jake de Rosier (Indian), H. A. Collier (Matchless) and Billy Wells (Indian). Indeed, his racing career, which spanned the period from 1903 to 1916 is so extensive, it is chronicled in a chapter all its own in the book. 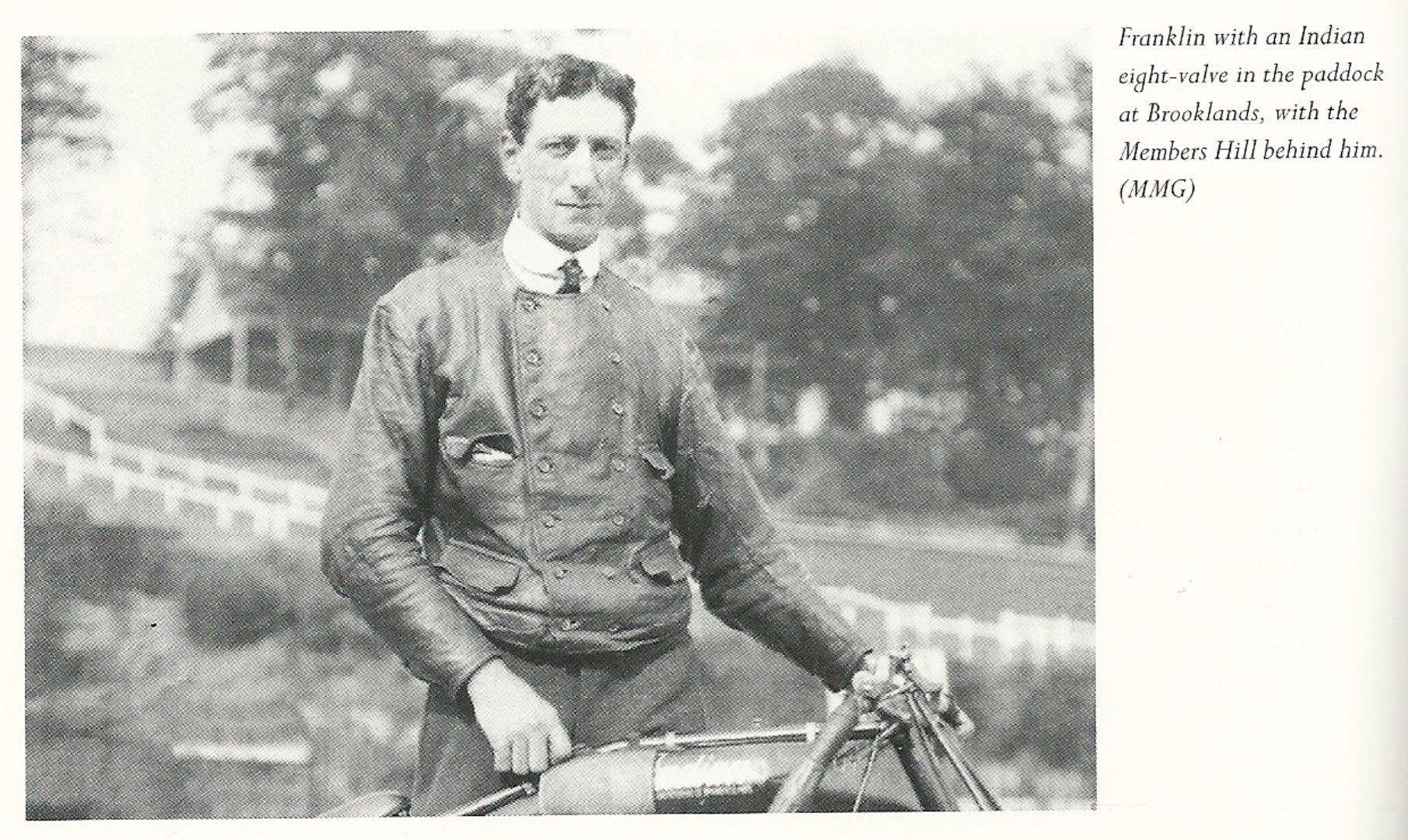 In 1914, Franklin set a world record for the ten-mile standing start in the 1,000cc class an average speed of 77.95 mph. That, after an attempt earlier in the same day to break the 24-hour record aboard an Indian eight-valve racer ended after three hours in a spectacular fire caused by a fuel line leak that had Franklin dismounting and rolling in the grass along the track to put out the flames! Franklin’s heroics across the pond did not go unnoticed at the Wigwam-Indian’s manufacturing and corporate headquarters-in Springfield, Massachusetts.In November 1916, Franklin arrived in New York aboard the White Star Lines’ RMS Adriatic, bound for his new job at the Wigwam as design engineer. Franklin’s early work for the company contributed to the development of the Powerplus model, but it was the creation of the Scout and Chief models where Franklin’s full breadth of design skill was brought to bear.Franklin was to face new challenges in the post-WWI era apart from those usually associated with simply improving the breed; motorcycle sales fell precipitously in those years and the designs had to change not just to increase speed and power, but to make motorcycles more salable. Franklin started with a clean sheet of paper and the result was the new Scout.The 1920 Scout would feature an all-new 600cc (37ci) side-valve, twin-cam unit construction engine, reversing the long trend of ever-increasing displacement and weight, double cradle frame, helical gear primary drive and, perhaps most important, reliable power in an affordable, lightweight package. 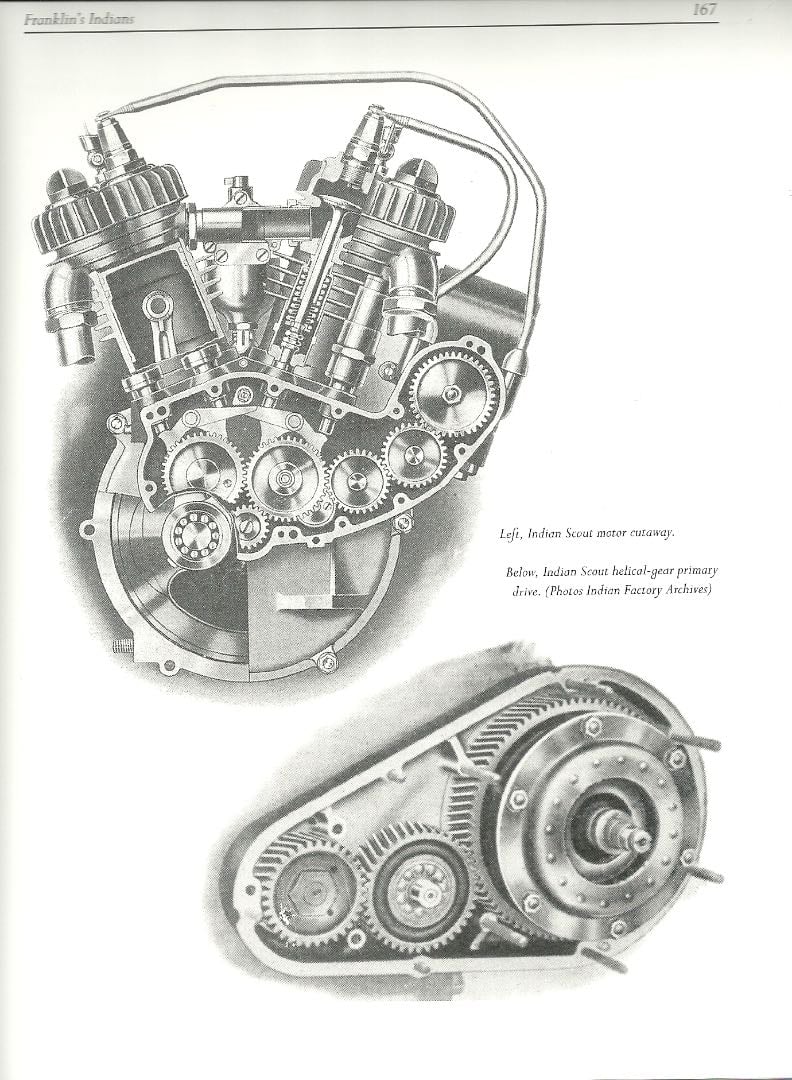 The success of the Scout quickly spawned release of the 1,000cc Chief in 1923, which featured many of the same innovations of the Scout and then some. Both bikes were clearly removed from the motorized bicycle of the industry’s early days—thanks to Franklin’s pioneering work.The story is told with insight and detail, not generally available without extensive research in many now very hard-to-find resources, but all brought together in this single truly remarkable volume. The four co-authors Harry V. Sucher, Tim Pickering, Liam Diamond, and Harry Havelin create a story that is encyclopedic in depth and detail, yet engaging and enjoyable to read.Other books reviewed by Ultimate Motorcycling that are part of the Veloce Classic Reprint Series:Book Data: