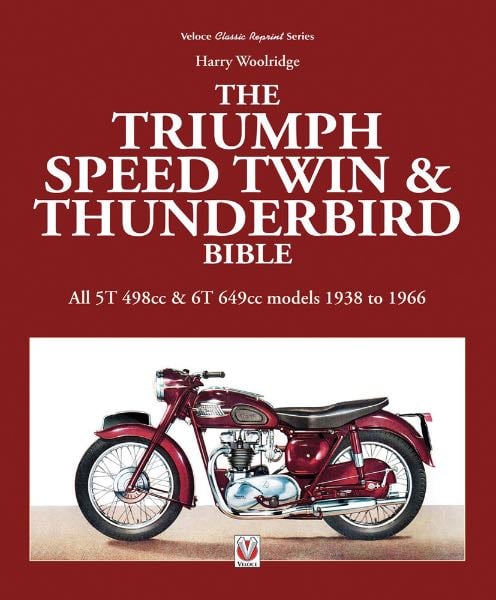 Now in its third printing, Harry Woolridge’s “Triumph Speed Twin & Thunderbird Bible” is probably the one book an owner, would-be owner, or fan of these classic Triumph models should have, if they have no others.Woolridge comes at the subject not only as a Triumph enthusiast, but from the uniquely informed position of one who literally was there when these models’ history was happening.[Visit our Rider’s Library for Motorcycle Book Reviews]Woolridge worked for Triumph inside the manufacturing operations for 30 years, including those final eventful years at Meriden leading to the collapse of BSA/Triumph.Woolridge minces no words as he explains his view of the politics and mismanagement that contributed to the downfall of the once-mighty Triumph marque in the years after the purchase of Triumph by BSA in 1951.“It seemed that all was not going well with the motorcycle group, as high level jobs with fancy titles (and attendant high salaries) were being created almost daily. Departments, which had previously been housed in one factory, were split up, and duplication of functions was commonplace.“The latter became apparent when the engineering meetings, which had previously taken place in ordinary-sized offices, had become so well attended that BSA had difficulty finding locations large enough to accommodate everyone,” he said explaining the ballooning of administrative overhead costs that took a toll on BSA/Triumph.Apart from rare insights on the company and the factors that ultimately affected its survival, Woolridge has compiled the most detailed information on specifications and model-specific data likely to found anywhere outside the company’s own engineering archives.For example, where some similar books may provide facts and figures to the level of detail to say the 1937 Speed Twin had a 6-volt electrical system, Woolridge informs the reader that, “Charging was by a Lucas E3HM dynamo via an automatic compensating type MCR 14 voltage control box. A Lucas D142F 8 in. diameter chrome plated headlamp with fluted domed glass provided the front light, the rear light was provided by a Lucas MT 110. The horn was a Lucas HF934 Altette device with chrome outer ring and was attached to the left hand seat spring bolt. A Lucas RS 39/L1 switch control was mounted in the petrol tank panel.”He even takes us to the answer to the holy grail of Triumph trivia questions: What exactly is amaranth red and why was it the Speed Twin’s flagship color?He says, “The official Triumph explanation went thus, ‘The amaranth is a plant found mostly in tropical countries. It has a flower which is red in color with a slight tinge of purple. A more common plant in British gardens is Amaranth Caudatis by experts, but Love Lies Bleeding is good enough for most people. The flowers keep their color even when picked and dried, thus the excellent service given by the Triumph Speed Twin is reflected in its color.'”In addition to fascinating and deep technical detail in the narrative, there are authoritative specification tables with engine and frame numbers by year of manufacture, production run dates, quantities built, color data, dimensional data on individual engine parts and chassis components and other information that would make it very difficult for someone trying to sell a hybrid or rebuilt Speed Twin or Thunderbird as all original to someone armed with this book.Not to be mistaken for a drab technical specification manual, the book also includes loads of color and black/white images and some of the major sporting achievements including Johnny Allen’s 1956 land speed world record streamliner powered by a normally aspirated Triumph engine.For additional reading on BSA and Triumph check out our reviews of:The Triumph Speed Twin & Thunderbird Bible—all 5T 498cc & 6T 649cc models 1938 to 1966 Fast Facts