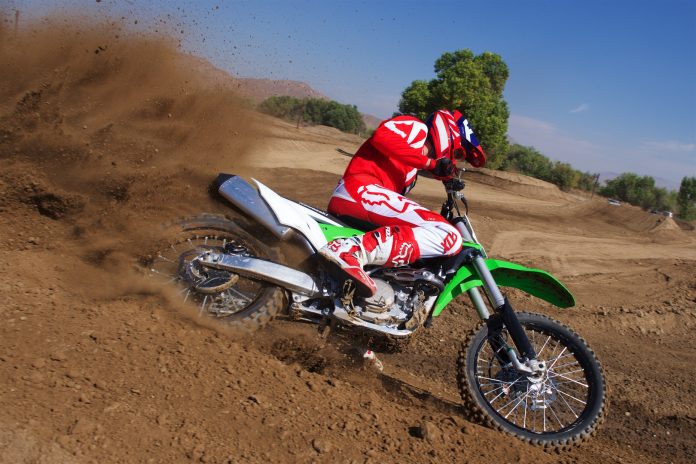 Kawasaki didn’t make any technical changes to its flagship motocrosser, the KX450F, for 2018, and only a few cosmetic ones. However, this is the motorcycle that Eli Tomac used to win the 2017 Lucas Oil AMA Pro Motocross National Championship in the 450MX class.While we spent plenty of time on MX tracks with 2018 Kawasaki KX450F bike, we also tested it in an off-road grand prix at the Glen Helen Raceway, where the FMF Glen Helen National is held. 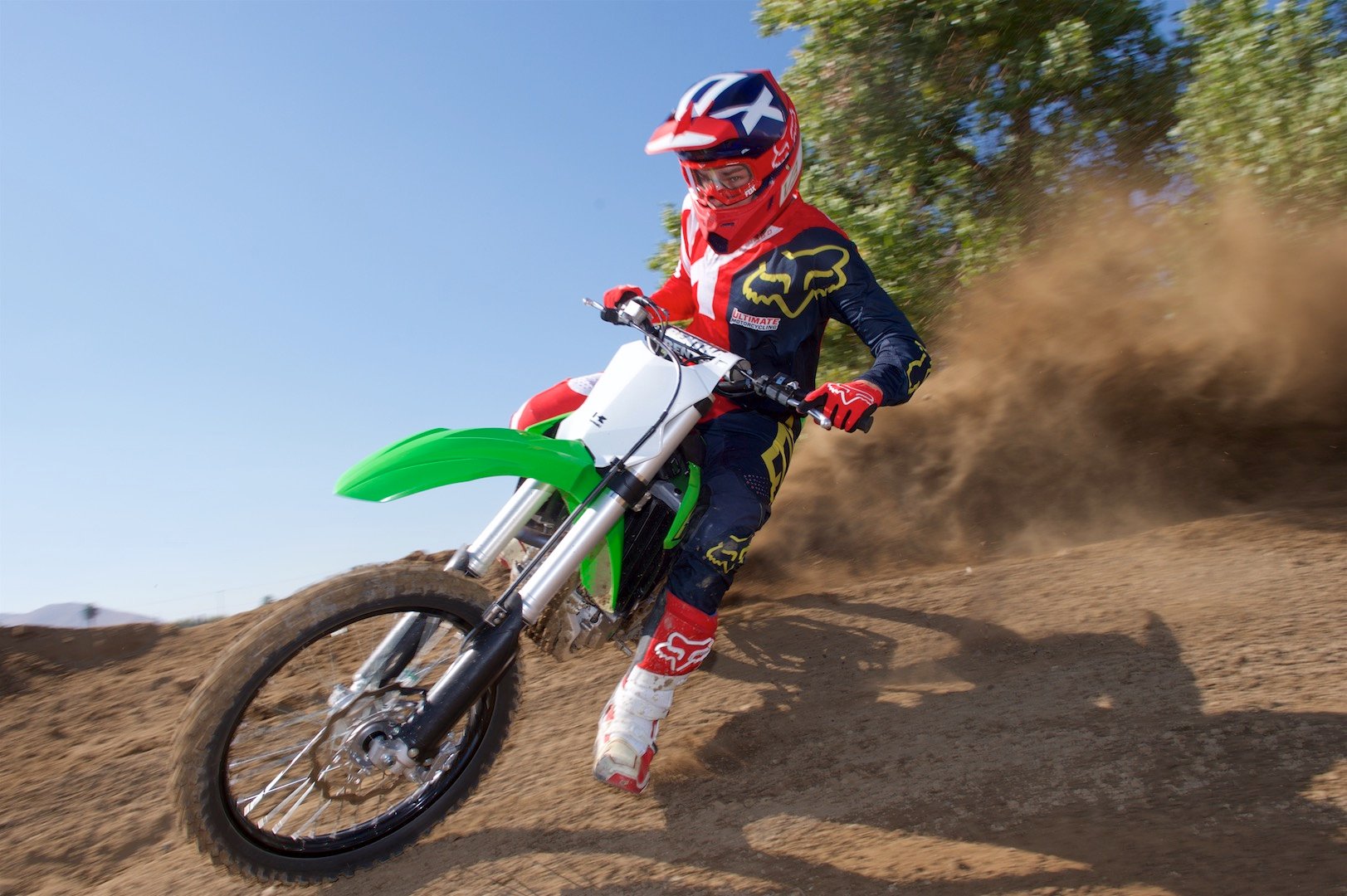 The course connected two motocross tracks, the truck track, and took on some of the hills of the facility. It’s mostly high speed racing with motocross dropped in. In preparing for the race and spending time with the bike, we got a good feel for it.The 2018 Kawasaki KX450F has a powerful motor, as all current 450 motocrossers do. It is strong off the bottom, pulling hard all the way to the top. There, it has plenty of over-rev if you are brave enough to use it.To suit your style of riding, Kawasaki supplies the KX450F with three different couplers to change the power from mild to wild; they all make a real difference you can feel.After trying them all, we went with the mild coupler—not so much because the standard or aggressive felt uncontrollable, but more because I felt like I could ride more aggressively, and I also felt the bike hooked up better.Another cool feature is the Launch Control. When activated, it retards the timing until you shift into third gear. With this feature you get increased traction off the starting line, helping you grab a holeshot. It is something you can feel, and really helps when traction isn’t the greatest on the starting line and start straight. On a deeply ripped high traction start, we wouldn’t use it, as full power could be put to use. 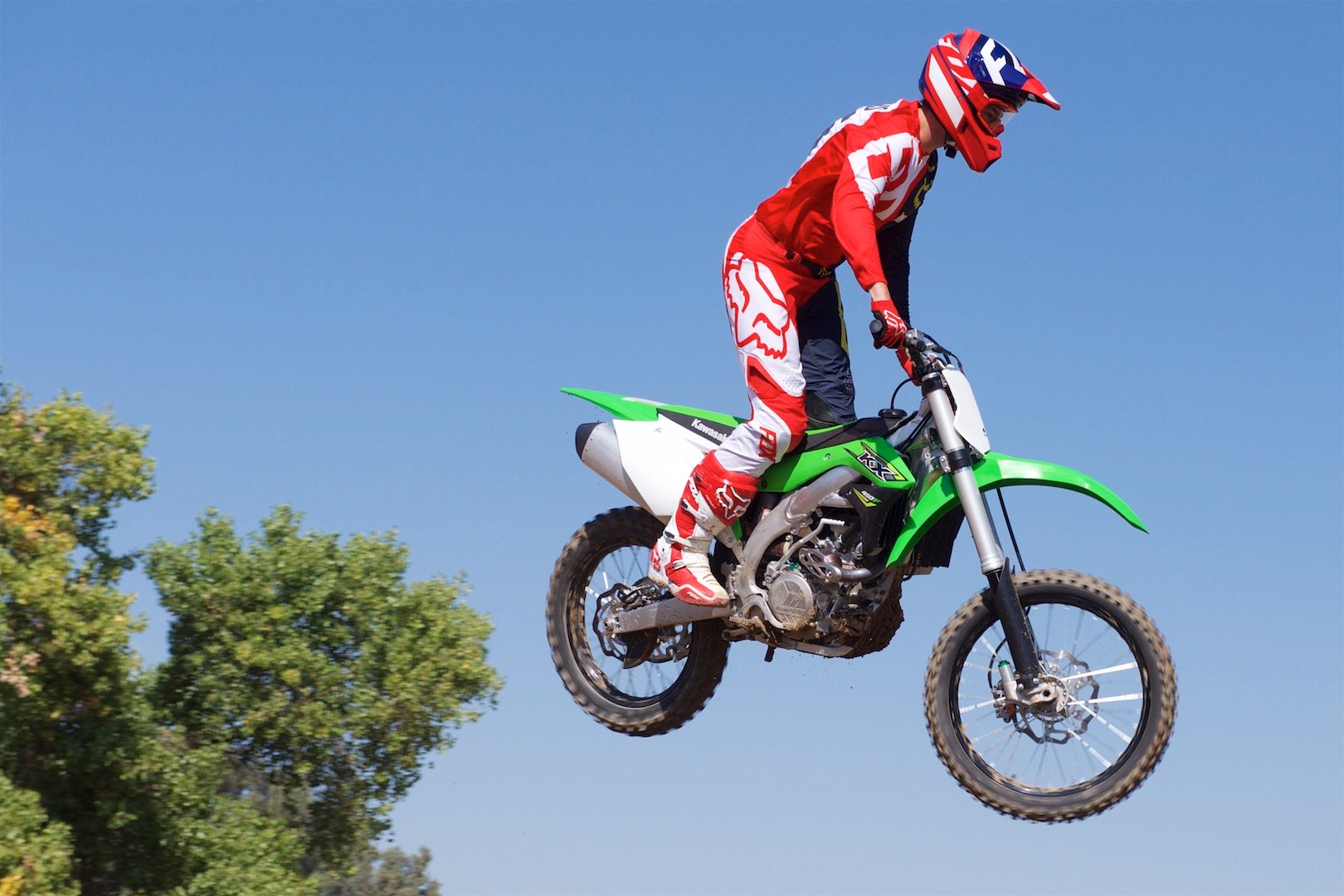 Although the 2018 Kawasaki KX450F starts easily with its kickstarter, and we never had any issues, it is one of only two 450 motocrossers left that don’t have electric start. Despite not having an electric start, the KX is still no lightweight in the 450 class. At a claimed weight of 240 pounds, it is in about the middle of the class. While it may not seem like a big deal, after living with both kick and electric starting, we want the magic button!On the chassis side, we had no complaints. It has a nice narrow feel. The seat, grip, and peg relationship is natural and comfortable.The 2018 Kawasaki KX450F is also nicely adjustable, with both the bars and the pegs having additional mounts to move the bars forward and back and the pegs up or down. The stock positions feel great and you will only want to use the other positions if you are extremely tall or short. At 6’ 1”, moving the bars to the forward mount feels way too far forward and messes up turning.Handling is also neutral. The KX450F turns well, but not as quickly as the Suzuki RM-Z450. The KX450F is stable at speed, though not as stable as the Yamaha YZ450F. Overall, the 2018 Kawasaki KX450F does nothing wrong, and is confidence inspiring at race pace.The KX450F continues to use the Showa SFF-Air fork. While it has been much maligned in the industry for being too labor intensive and complicated, we came to like it. 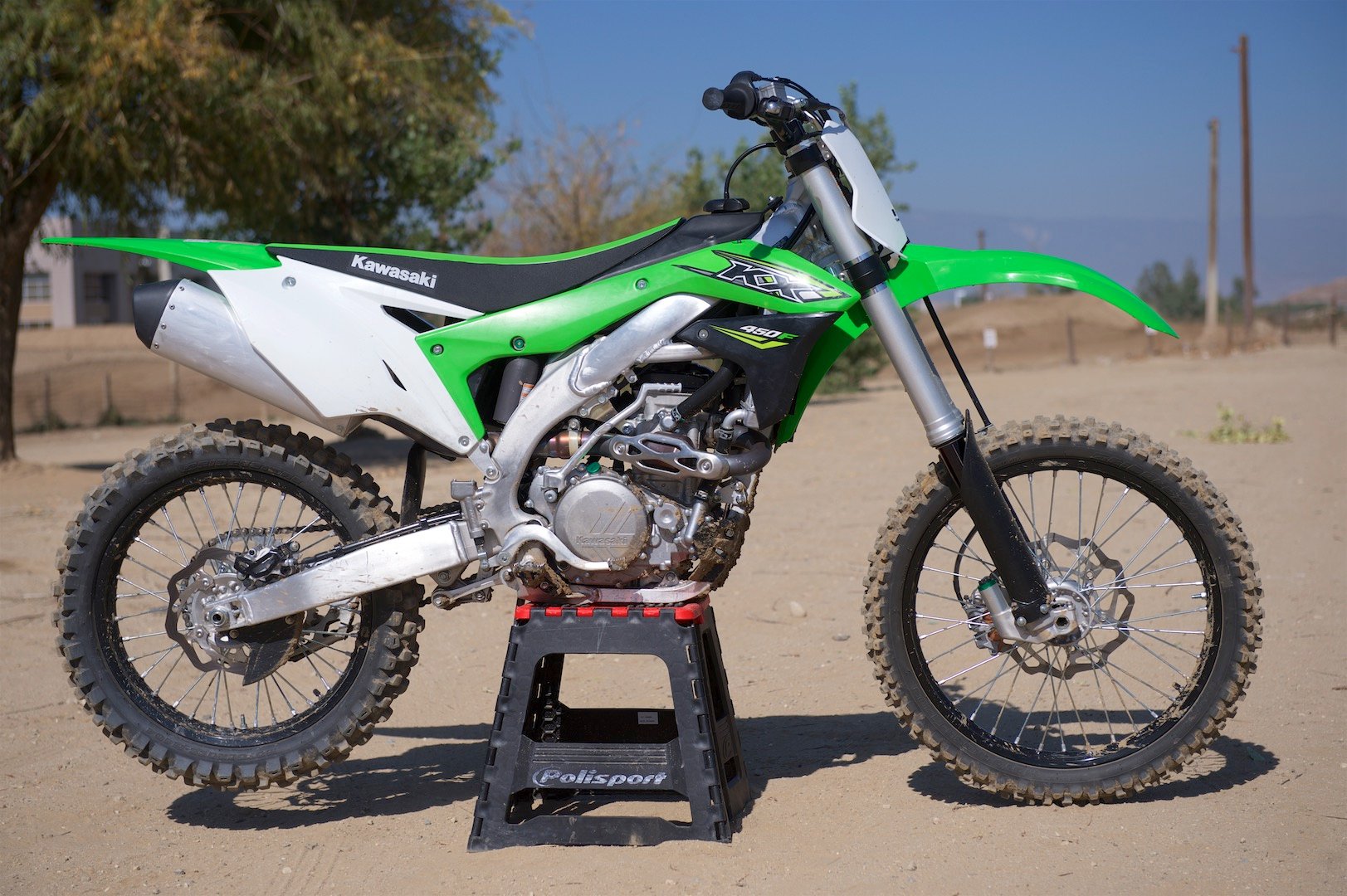 A Kawasaki tech told us that it wasn’t necessary to check the air pressure on the three different chambers every time you ride, as many people think. He also explained what the three chambers actually do, which is not as clear in the manual as it should be. Once armed with this info and taking some time testing, we came up with a setting that we really liked and suited our style.The Showa shock was easier to set up—just set the sag and go. We were happy with the action in everything from the smallest chop and braking bumps to the biggest hit from flat-landing jumps.Our off-road stint revealed that the 2018 Kawasaki KX450F does stall easily—not a great trait for a kickstart bike. It’s not a problem on the motocross track. It is more of an issue when you’re taking off or doing more slow technical riding. At first I thought maybe it was just me, but other riders who rode the bike had the same comments.Also when doing slow technical riding, or on a tight course where we were abusing the clutch, we did notice some clutch fade. It quickly went away when the clutch cooled, and it was never felt on the motocross track or when the bike was raced.Shifting is nice and smooth with no missed shifts. Neutral is easy to find when the bike is at an idle. Brakes are adequate. They have a nice feel, but there are others out there that do offer more strength.The fit and finish of the bike is a bit inconsistent. The plastic is streamlined with a nice modern look. Some of the wiring, however, seems like it was thrown on as an afterthought. The bar bend is really nice and comfortable for about anybody, yet it still uses the small 7/8-inch aluminum bar instead of the fatter tapered diameter bars. The fasteners don’t look like top quality; however, we had zero problems with them and nothing come loose on us during our test. 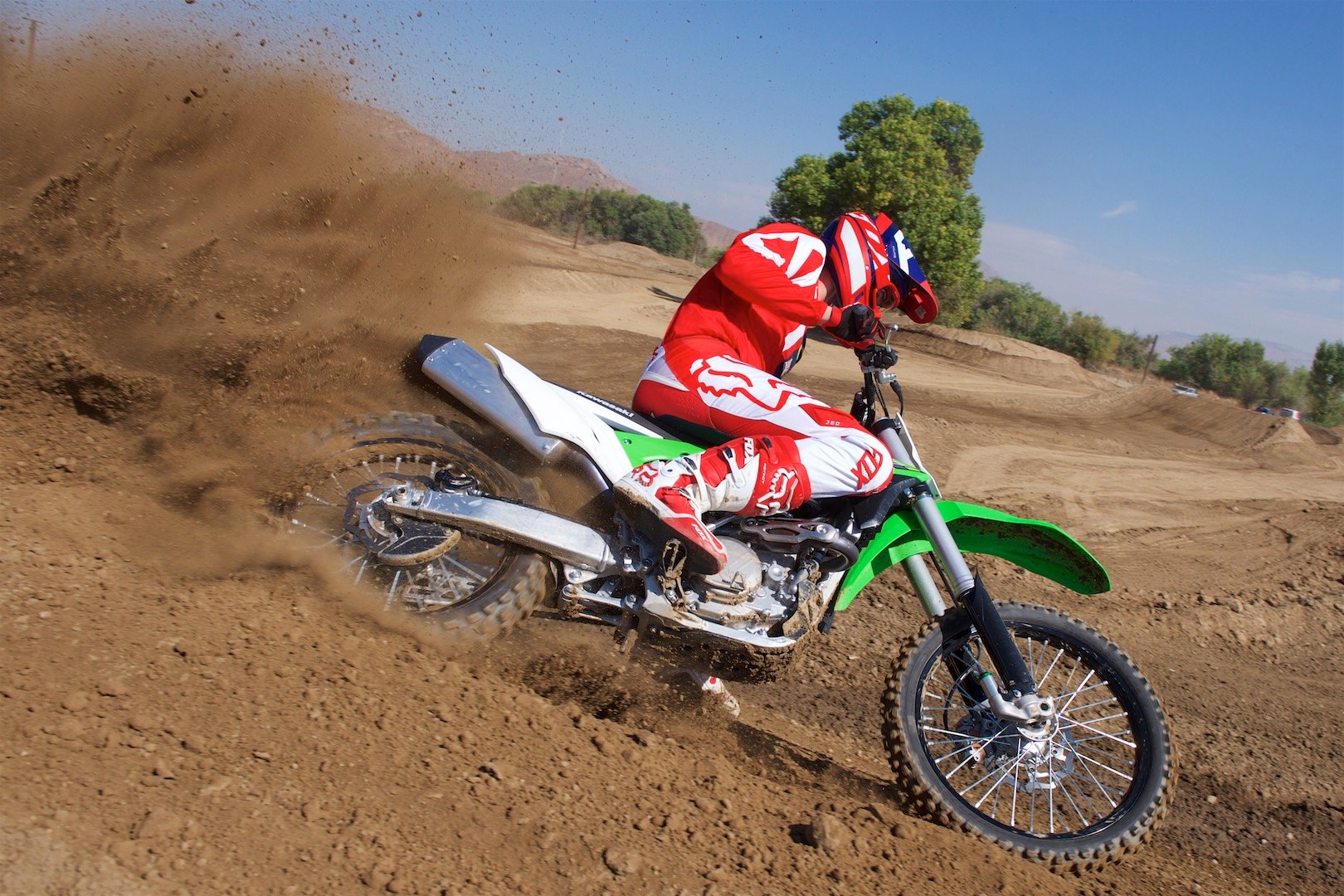 For the off-road race, the 2018 Kawasaki KX450F performed flawlessly. Even with the kickstarter, I got a decent start on the dead engine start. The wide power range, with all that power on tap, pulled me up Glen Helen’s hills with no problems, even when I messed up the corners at the bottom giving myself a bad run at them.With the stable and predictable chassis, I had the confidence to hold the throttle on down the high-speed chopped out straights without a worry. Once I got toward the end of the race and fatigue set in, it was nice have a bike that I could just twist the throttle and go as it pulled right out of the corners from very low rpm. I did stall once, but that was from coming into a corner and not getting the clutch pulled in under braking. That was the time I really missed not having electric start. 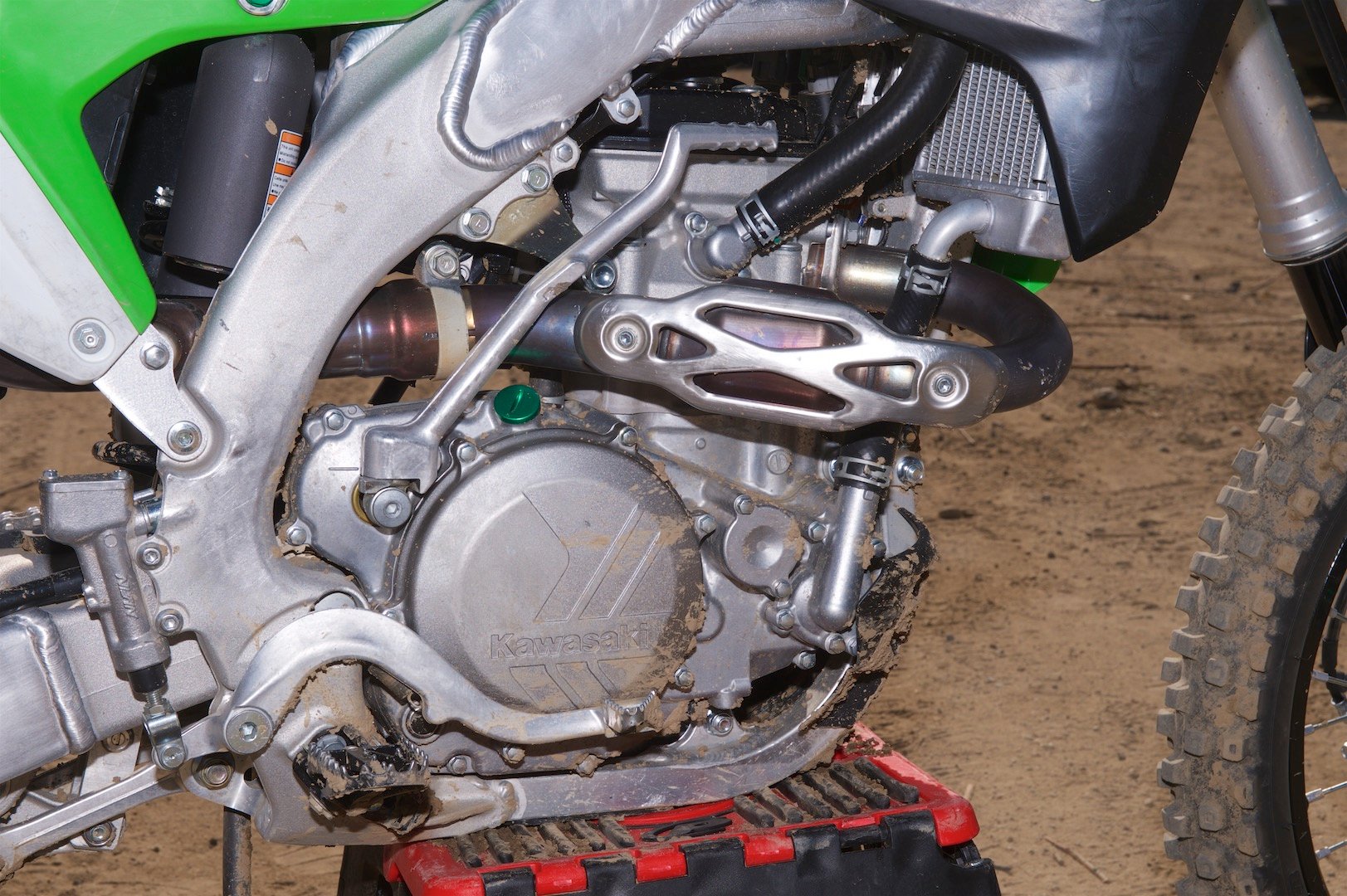 In conclusion, the 2018 Kawasaki KX450F works great for its intended purpose—racing. It is a motorcycle you can race bone stock. With easy setup, it will work great for a rider who doesn’t want to put a lot of time into, or isn’t capable of, tuning the chassis and motor to a fine point.Photography by Don WilliamsRiding StyleFor specs and a photo gallery, click to page 2 below