When the Indian Scout was unveiled at Sturgis Motorcycle Rally in 2014, the bike immediately rivaled the Sportster in three ways: minimalism, entry-level price point, and an ideal platform for customization.

The Scout arrived with a 69CI v-twin that produced 100 horsepower, and was a key component to bring new riders under the iconic Indian Motorcycle brand, which was highlighted by the more-expensive Chief and Chieftain.

Indian followed up the Scout with a smaller Scout Sixty for 2016, which directly targeted the entry-level rider with its smaller 60CI engine that produced 78 horsepower. 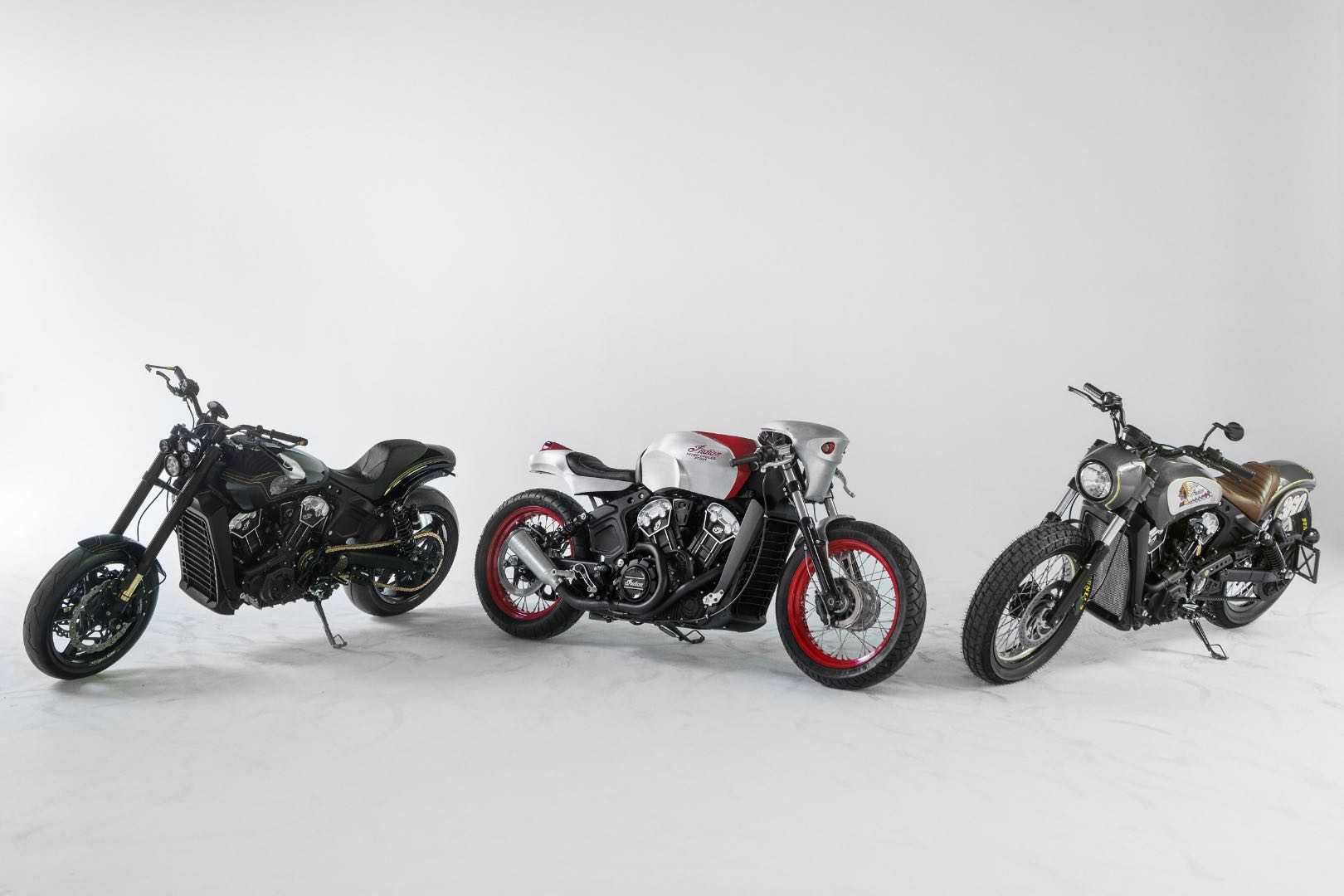 When parent company Polaris Industries halted production of its more performance-based brand Victory Motorcycles in January 2017, resources got shuffled around.

Thankfully, a few of those resources were now planning some factory-based custom Indian builds. The first of these surfaced in July 2017 with the Indian Scout Bobber. The tagline: Strip it Down.

I headed to Minneapolis that month to test the new Bobber, and immediately fell for it.

The most notable differences were revised ergonomics for added comfort, and updated suspension for sharper handling. But when the WOT action subsided, an equal love surfaced for the bike’s overall aesthetics; Indian designers did a hell of a job on this bike.

Over cold beers in the suburbs of Minneapolis, I began dreaming up ideas for customization with some compatriots. I also began anticipating when the world’s leading customizers would enhance the already appealing Bobber. 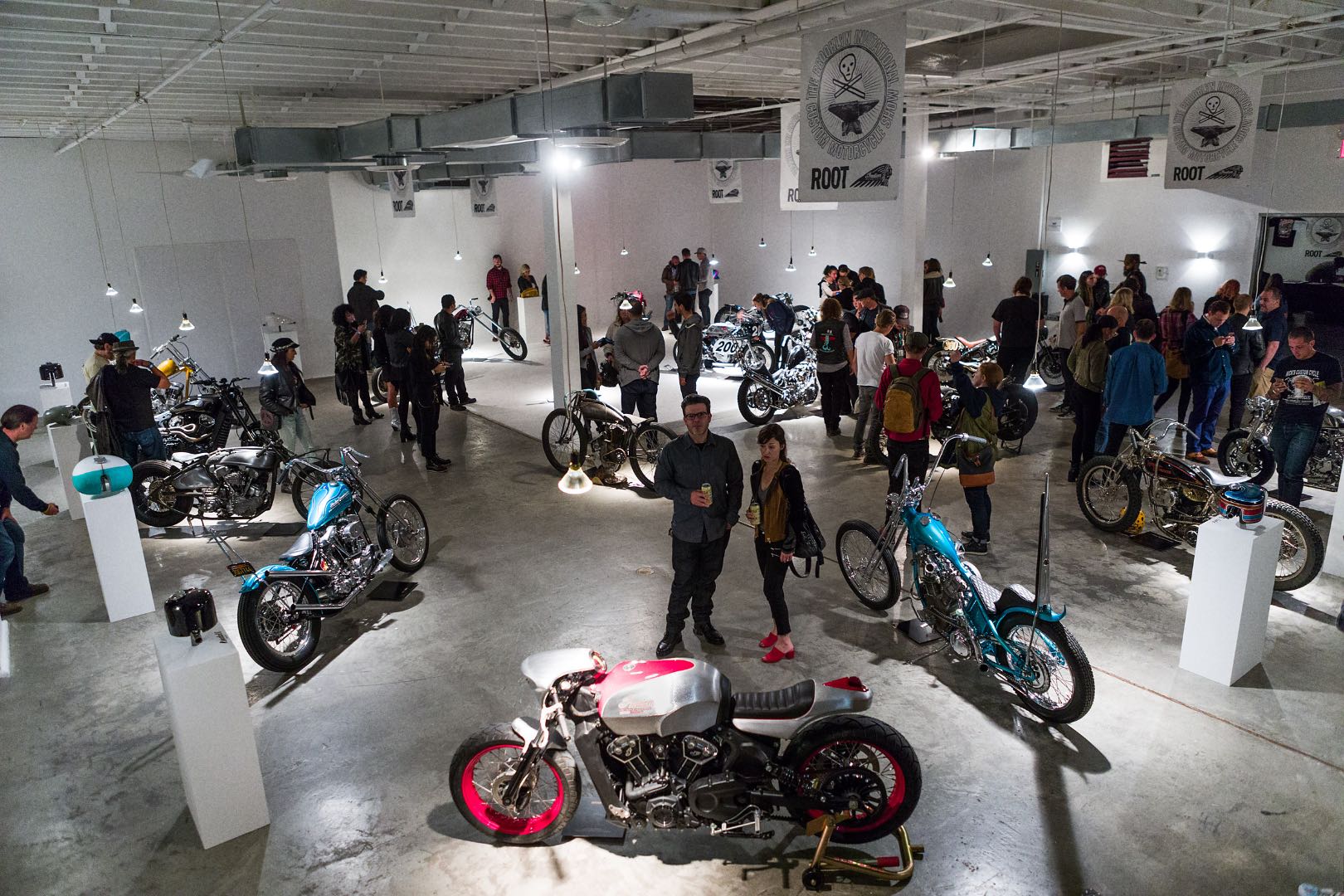 This time arrived sooner than I thought. I got an invitation from Indian Motorcycle to join them at Brooklyn Invitational Custom Motorcycle Show in early September where three custom Bobbers would be launched before a hip custom moto crowd.

There, Indian unveiled three all-new Scout Bobber designs by Kraus Motor Co., Keino Cycles, and skateboarding icon Steve Caballero, who worked with one of the biggest names in the moto industry, Roland Sands.

We will profile each of these builds in upcoming posts with commentary from the designers, but for now here’s a quick breakdown and some photos of these gorgeous Bobbers.

Which one is your favorite? I particularly fell for one, and am curious to see what others are thinking.

Inspiration: A performance-bred company, Kraus Motor Co. was inspired by a new generation of motorcycle riders looking for quality and performance in their American motorcycle and aftermarket products. This is clearly evident due to the Ohlins suspension, chain drive, Rotobox carbon-fiber wheels, and one of the coolest—and best sounding—exhaust. 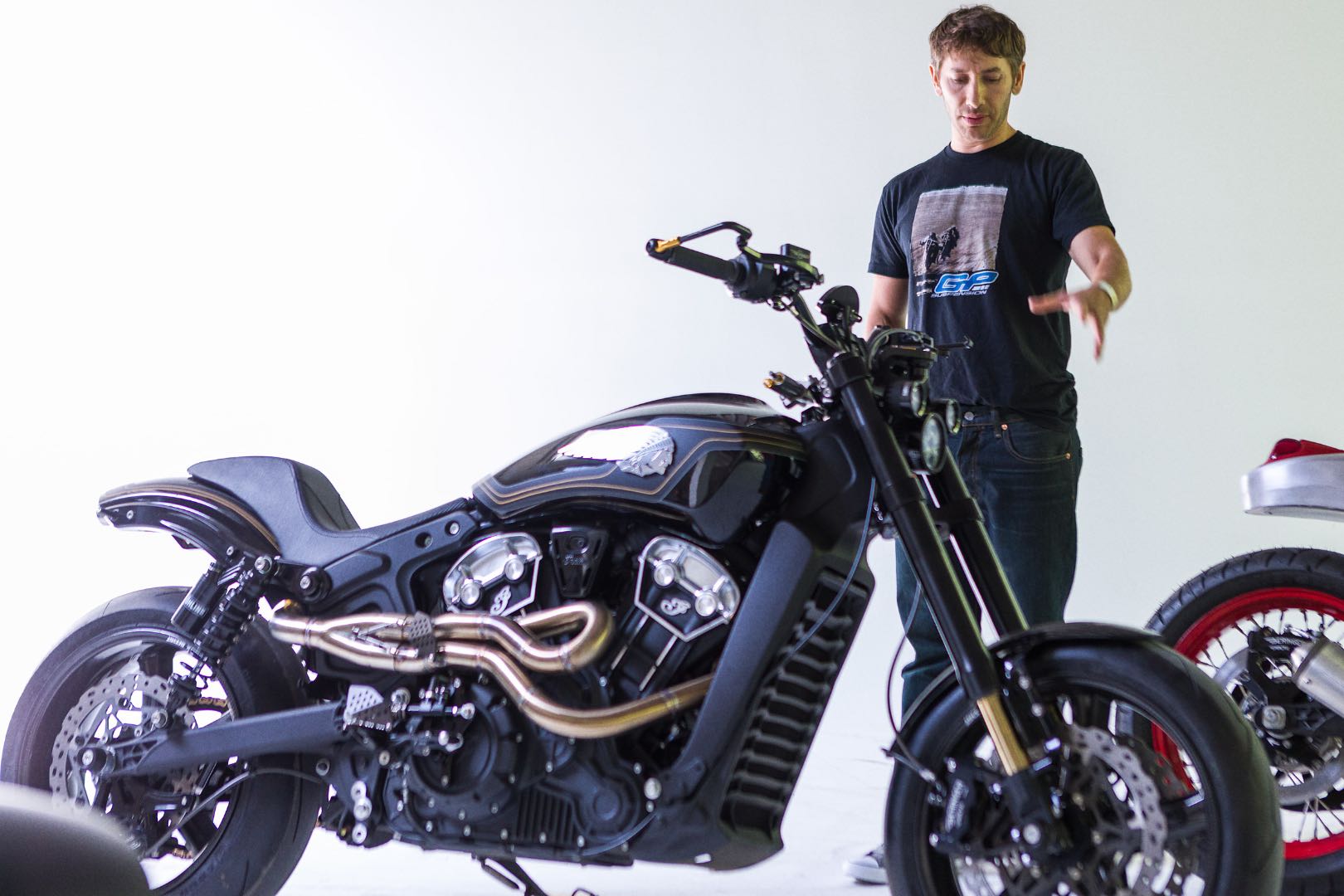 Builder Thoughts: “When we build on the foundations laid by tradition we are reminded to learn from the past and push the limits beyond what has been done. Indian Motorcycle has opened the opportunity to recreate American made quality standards and performance. Each Indian model platform has unique qualities that offer the aftermarket and consumer opportunities for customizations to easily reflect individual styles and designs. It has been a complete pleasure to customize and build upon the foundation laid by Indian engineers.”

Inspiration: Caballero’s custom Indian Scout Bobber was inspired by the style and designs of a street flat tracker. Utilizing Caballero’s number 360, he worked with Roland Sands to feature a variety of RSD’s premium offerings for a clean and classic look. 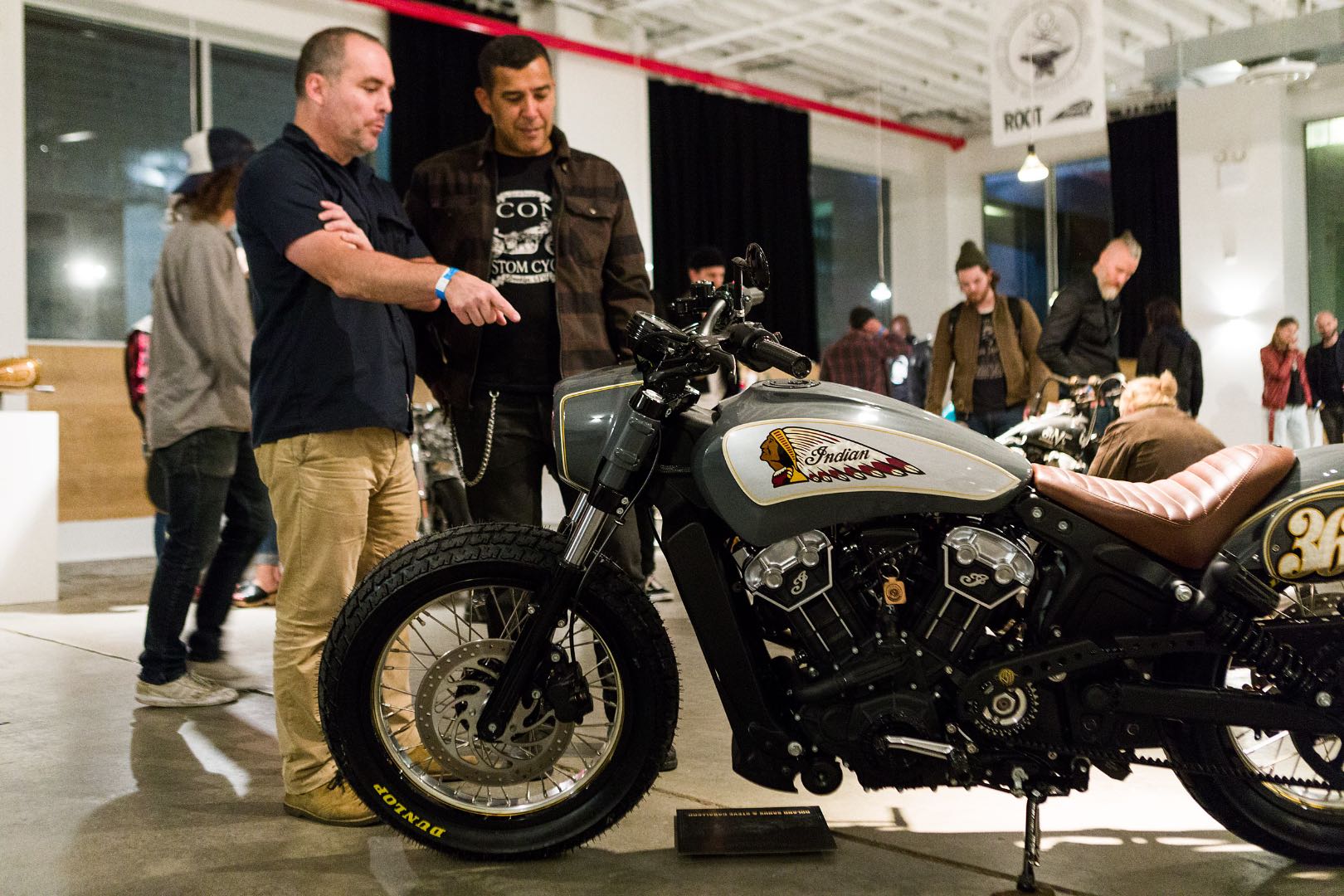 Builder Thoughts: “The Indian Scout is a fantastic platform for customizations, and when we decided to customize a Scout Bobber for the Brooklyn Invitational I knew I wanted to work alongside Roland and his team at RSD. As a renowned bike builder, Roland has extended experience with the Scout platform and has a suite of offerings for the street flat tracker look we wanted to achieve.”

Inspiration: Keino’s custom Scout Bobber was inspired by streamliner trains, airplanes and automobiles of the 1950s, ‘60s and ‘70s. It’s definitely the most futuristic take on the Bobber. 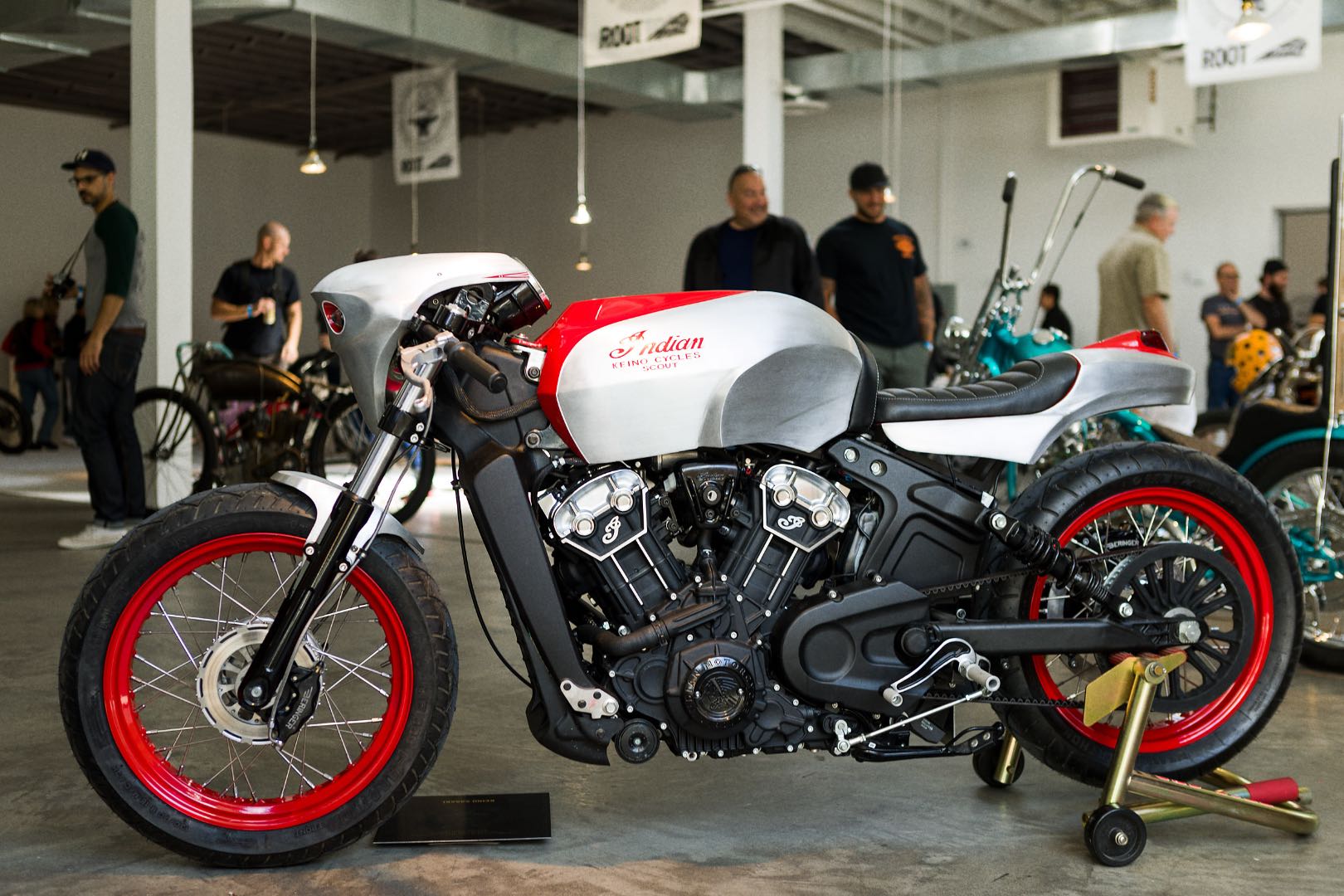 Builder Statement: “It was a great opportunity for me to work with the new Indian Scout Bobber with freedom of creativity and ideas. When I stripped the bike down to its main chassis, I knew it could go beyond its styling originally intended. I hope this bike showcases the possibilities of the Scout Bobber with little imagination and creativity.”